China (PRC) sanctioned 7 US individuals and entities including Sophie Richardson, the China Director of Human Rights Watch (HRW), who has reported on abuses of Uyghurs. Richardson told IPVM China wants to "lash out at critics", while China's US Embassy told IPVM these are "countermeasures" against "meddling in China's internal affairs." 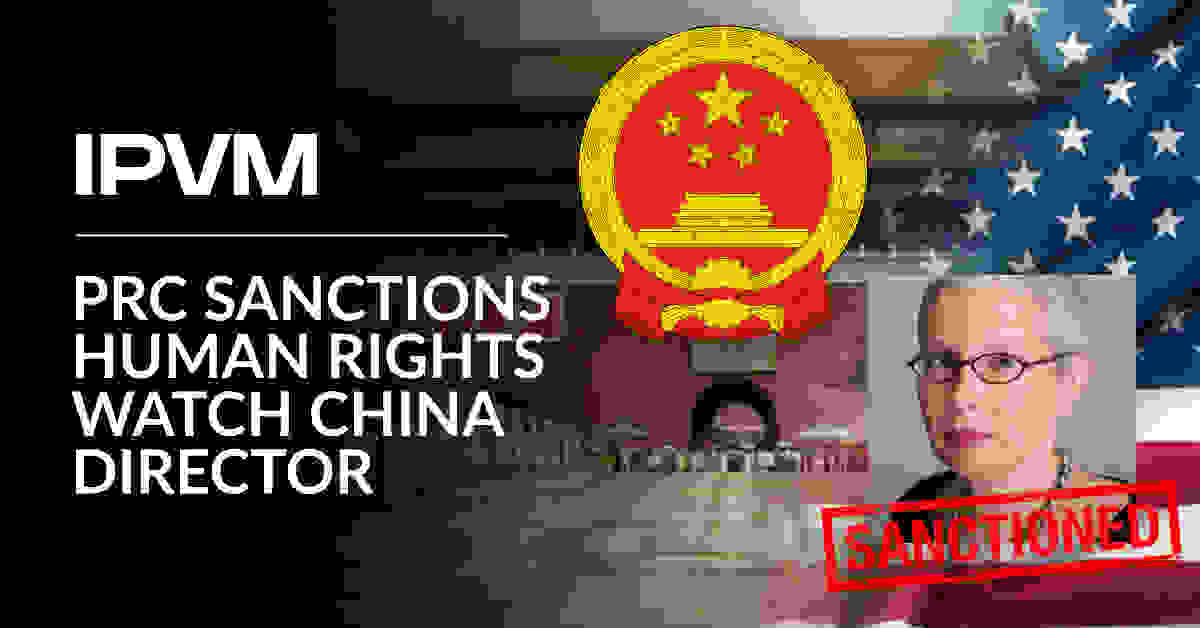 The sanctions came out of China's new Anti-Foreign Sanctions law designed to create "countermeasures" to US sanctions like those against Hikvision and Dahua.

Whereas the US targeted individuals/entities involved in Xinjiang human rights abuses, China's sanctions target those who "meddle in China's internal affairs."

HRW has published evidence, that China is committing "crimes against humanity" in Xinjiang.

In these cases, I think it says a lot more about what the Chinese government is, is trying to accomplish, than anything else, which is just sort of lash out critics.

She added, "many of these things are, as we all know, ultimately done for an audience of one, [Xi Jinping]."

Richardson contrasted US sanctions as evidence-based:

US sanctions are based on clearly delineated and legislated behavior. Magnitsky sanctions are not just imposed willy nilly on US government critics, they're imposed based on credible evidence.

The spokesperson for China's Embassy in the US, Liu Pengyu, provided a statement to IPVM describing China's action as "lawful and reasonable", and a response "to the erroneous practice of the US side":

China's impositions of sanctions on Ms. Richardson and six other US individuals and entity are reciprocal countermeasures in response to the erroneous practice of the US side, following the Anti-foreign Sanctions Law of the People's Republic of China.

According to the Anti-foreign Sanctions Law,the People's Republic of China opposes hegemonism and power politics, and opposes any country's meddling in China's internal affairs under any pretext or through any means. If a foreign country, in violation of international law and basic norms governing international relations, acts to contain or suppress China under various pretexts or pursuant to its own laws, adopt discriminatory, restrictive measures against any Chinese citizen or organization, and meddle in China's internal affairs, China shall have the right to adopt corresponding countermeasures.

The relevant departments of the State Council have the discretion to include in a countermeasure list the individuals and organizations directly or indirectly involved in the development, decision-making, and implementation of the discriminatory, restrictive measures as mentioned above.

So it is lawful and reasonable for China to take reciprocal countermeasures.

China Ministry of Foreign Affairs did not respond to a request for comment seeking clarification on why Sophie Richardson was selected for sanctioning.

This 'Anti-Foreign Sanctions' Law imposes broad restrictions on those sanctioned, such as Richardson, e.g. being blocked from traveling to the PRC or doing business with the PRC:

The spouses and immediate family members of individuals included in the counter-control list;

Plus it includes broad and undefined "Other necessary measures" that provide the PRC flexibility in punishing those sanctioned.

No Communication From PRC To Richardson

Richardson said neither notice nor explanation has been provided by the PRC for the sanctions against her, or their impact, "If somebody has sent us something - a letter, a fax, a carrier pigeon, I don't know what, a communique - spelling all of this out, it has not reached me." Richardson said she found about it from a colleague who shared the Xinhua announcement.

However, HRW told IPVM, they "do not intend to do anything different. We have every intention of continuing to document these serious human rights violations and advocate solutions to them."

Warning To Those Who Report On The PRC

This is a clear warning to those who report on the PRC. While Human Rights Watch reports critically on human rights abuses around the world (including in the US), this unprecedented sanctioning shows the extent the PRC will go to suppress and punish those who do that.

2022 Video Surveillance Cameras State of the Market on Jan 04, 2022
Each year, IPVM explains the main advances and changes for video surveillance...
Comments (6) : Subscribers only. Login. or Join.