We bought the new Panasonic 4K / 12MP WV-SFV781L dome camera and tested it against the:

In this in-depth report, we tested:

However, it is relativetely expensive and quite large, closer to the price and size of PTZ speeddomes than fixed domes. Bandwidth is also a concern, as its consumption in many scenes was the highest of cameras tested, even when using higher quantization than average.

Of the (4) 4K cameras we have tested, this was the first to show major benefits of moving up to Ultra HD to cover larger areas. To that end, we believe this Panasonic model will become an attractive option for such applications.

Note: next, we plan to test the Sony 4K camera as it starts to ship.

This chart sums up our key findings for each camera in this test:

The WV-SFV781L's most notable physical feature is its size, much closer to that of speeddomes than other fixed domes, illustrated here in this comparison to an Axis Q6045 PTZ: 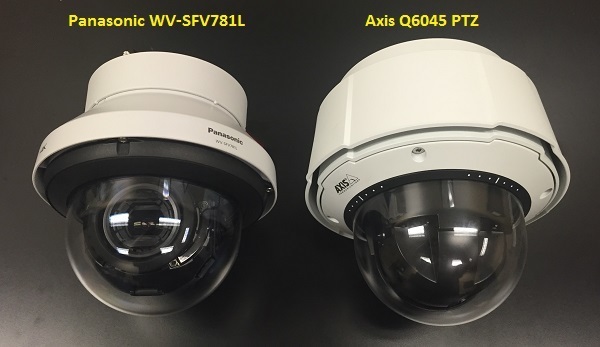 The camera also includes on-board controls for zoom and autofocus, as well as a test monitor output, which may speed installation. We review all these features in this video.

In addition to 4K resolution, the SFV781 is capable of 15 frames at 12MP resolution (4000x3000). This provides essentially the same horizontal PPF, with nearly 50% increase in vertical field of view. The camera had no issues maintaining the specified 15 FPS at this resolution during our tests.

Linked are examples of the Panasonic WV-SFV781L in both 4K and 12MP resolutions. The ~185 MB zip folder can be downloaded here.

The WV-SFV781L captured more fine details in wide FOVs than other cameras tested. This is most pronounced in this ~135' HOV (~100' from cameras), where the Panasonic 4K is able to produce stronger subject details and more legible lines of the test chart than other cameras, as well as easily capture our test license plate. 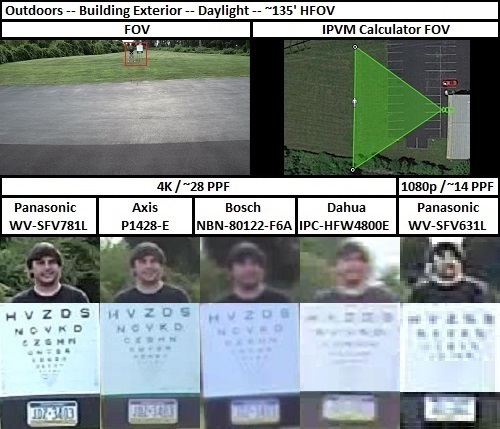 At about 50' from the cameras, the FOV narrows to ~70'. The WV-SFV781L still produces the best details of cameras tested. 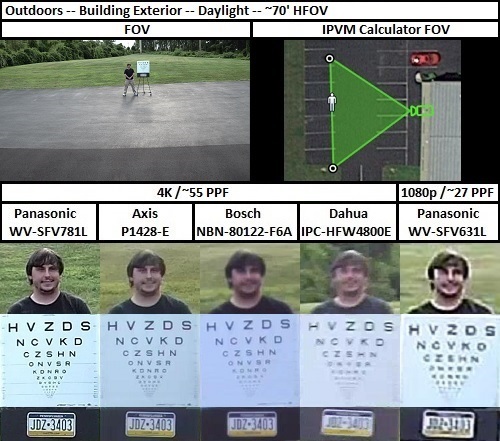 Finally, in our narrow indoor FOV, all cameras produce identifying details and the test chart is easily legible, though the SFV781L produces moderately better details with more even exposure and better visibility. 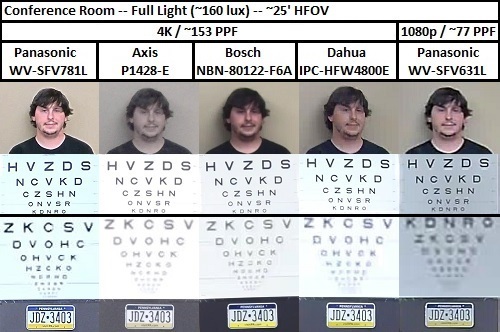 The WV-SFV781L's IR range is specified for 30m/~98'. At this range, the test subject is detectable in our outdoor test scene, seen here: 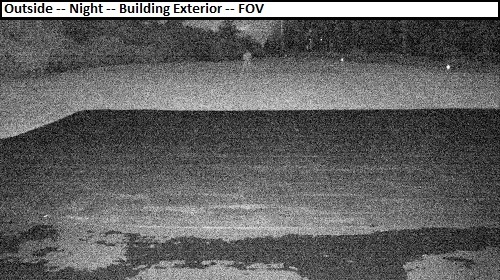 However, details at this range are weak (as in all cameras) due to high levels of digital noise, obscuring the subject. 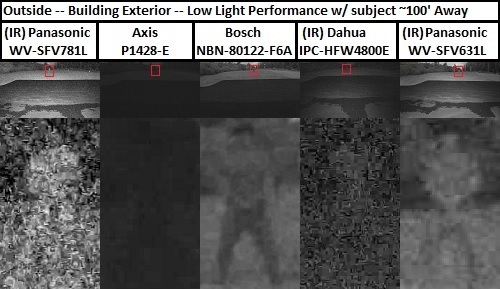 Closer to the camera (~25') using a narrower 25' HFOV, the 781 delivers the strongest details of our test chart and license plate, moderately better than the Dahua 4K and Panasonic 1080p IR models. 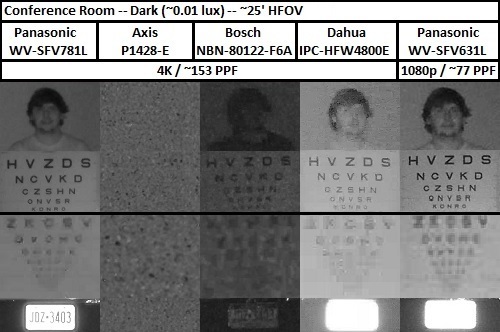 As with other Panasonic models (see our test of the Panasonic 6 Series), the SFV781's IR was responsive to subjects entering the scene and approaching the camera, with power dimming to avoid overexposure. This is visible in the example below, as our subject walks from ~100' in.

In addition to its built in IR, the 781 includes a night mode called "Super Chroma Compensation" which opens the mechanical cut filter while staying in color, adjusting white balance to compensate for the purplish shift created by IR light.

This results in vibrant nighttime color images, seen below at ~0.2 lux, with slightly better details than the daytime color mode (seen far right below). Note that the IR illuminator is not used in this mode. 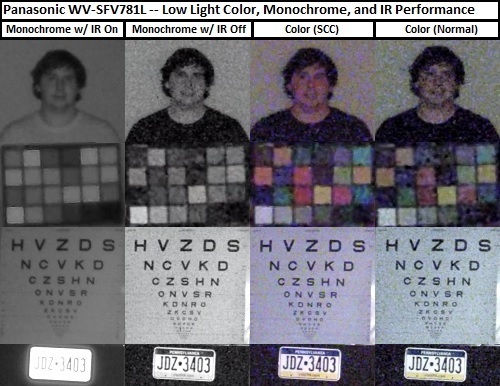 WDR performance was strong against bright backlight, but weak in dark areas, seen in this full FOV image: 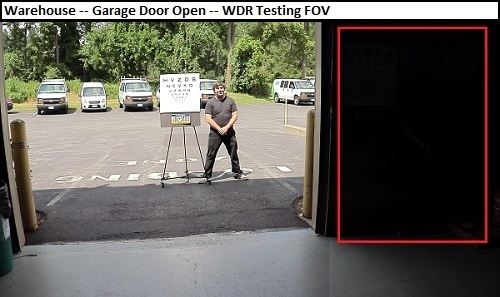 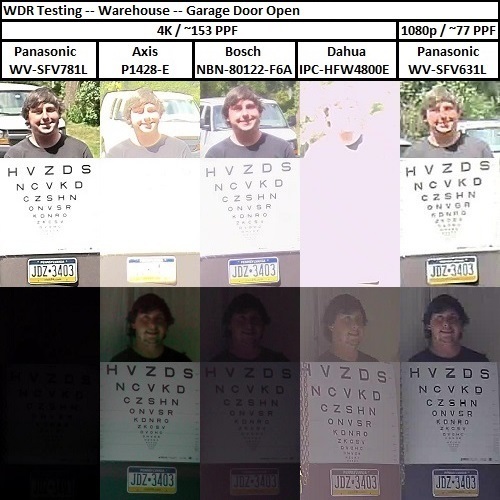 We found ABS' effects to be minimal, with no practical increase in visibility in the dark areas of our WDR scene. Turning BLC on resulted in our subject being almost completely washed out in the bright area of the scene, while he was much more visible in the dark area beside the door, seen here: 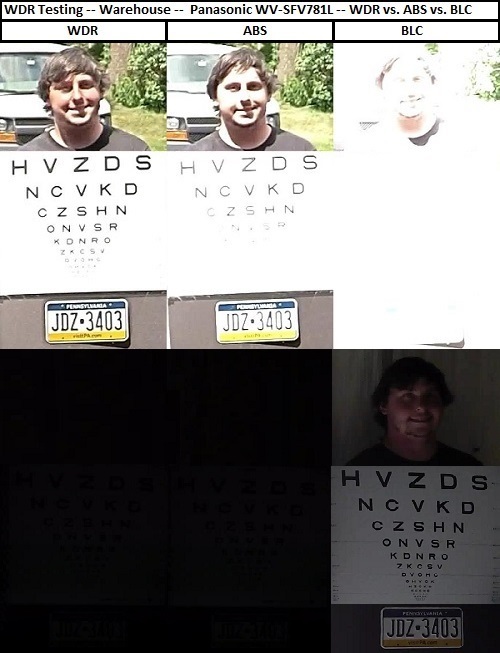 The WV-SFV781L's default compression ("Normal", 5 on a scale of 0-9) produced an average quantization of ~37, very high for most cameras, which display significant macroblocking and reduced quality at these levels.

However, the visible difference between ~37 and average quantization of ~30 in the 781 was minimal, with only slight reductions in very fine details, despite a nearly 6x increase in bitrate. Compare this to the Axis P1428-E, below right, which show a much more significant decrease in quality when increasing quantization to 37, with the subject's face looking slightly blurred. 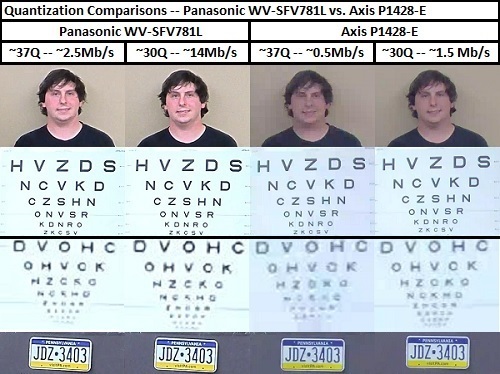 Because of this difference in image quality at differening quantization levels, we tested the WV-SFV781L at both their default "normal" quality level and standardized to 30.

Cameras were tested using default settings unless otherwise noted. Shutter speed was set to 1/30s max in all models. Quantization was standardized to ~30 with an I-frame interval of 10 (1 per second).

Avigilon Pro 4K Camera Tested on Jan 03, 2017
Avigilon is best known for their large sensor, high megapixel cameras. But...
Sony 35mm Super Low Light Camera Tested on Oct 31, 2016
Sony is making a big push for their SNCVB770 camera, touting its low light...
Panasonic Embraces Advidia OEMing of ACTi, Dahua and Hikvision on Jul 26, 2016
Clever move or surrender? When Panasonic bought Video Insight in 2015, the...
Selling 4K Cameras on Jun 21, 2016
This is a first in a new series to help integrators and manufacturers do a...
The Super Low Light Shootout 2016 on Mar 28, 2016
How good are surveillance cameras in low light? With the advances in...
Avigilon Trumps Axis' Deceptive Ad With A Real One on Feb 15, 2016
Axis and Avigilon are reversing roles. While the IP video pioneer...
First Integrator Face Off Results on Jan 20, 2016
The results are in, and they are interesting indeed. Five integrators...
License Plate Capture 4K Test on Jan 11, 2016
License plate capture is one of the most popular surveillance applications....
Sony 20MP / 4K Camera Tested on Oct 26, 2015
For 18 month, Sony has been hyping 4K cameras, a year before they even...
Panasonic System President is Out on Aug 19, 2015
The architect of $1+ Billion Panasonic North America 'solution' oriented...
Comments (30) : Subscribers only. Login. or Join.