2Gig is one of the most widely used intrusion systems, with two product lines that are the main offering of many alarm companies, huge national installers and small mom & pop shops alike.

In this dual-test, IPVM bought both variants of this all-in-one alarm system and tested them to see how they compared to other brands, and to each other. 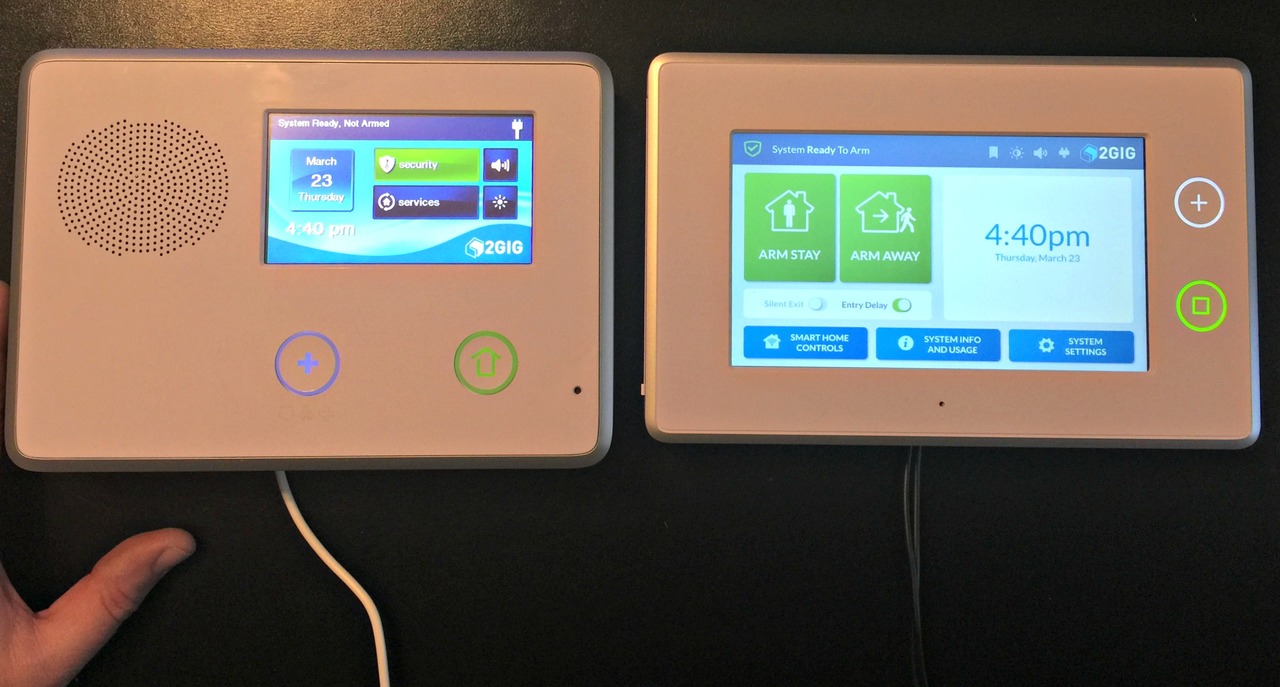 Inside, we examine both Go!Control panels - the GC2 and GC3 - to compare and contrast them on these points:

Inside, we detail our test results that contrast 2Gig systems to other typical residential and small business intrusion alarm systems.

2Gig's Go!Control GC2 and GC3 combo panels are designed with some features widely appealing to the residential alarms market:

However, 2Gig's platforms have some drawbacks that are routinely minimized or avoided by competitors in the intrusion market:

Compared to other intrusion systems that limit number of reselling dealers and tightly control resell pricing, 2Gig channel controls are loose. While typically still selling through distributors, 2Gig products are widely sold as 'DIY' systems in kit form from marketplace vendors like eBay and Amazon.

Despite being a newer release, our testing shows the GC3 lacks some of the core appeal of the older GC2 panel. Both panels are roughly the same size, but the newer GC3 touts a larger capacitive touchscreen measuring about 7", while the older unit has a smaller ~4.5" resistive type.  Aside from being larger, with bigger buttons, in our testing the capacitive glass resulted in more dependable and accurate touch detection of commands.

A side-by-side of both panels is shown below:

The backside of the panels is enclosed by a combo cover/mounting bracket, with the entire unit snapping down into a flush wall mount orientation. Depending on model, the results in the panel protruding ~ 3/4" - 1 1/4" from the wall. Inside the cover contains the sealed (non serviceable) touchscreen, backup battery, panel circuit board, and hardwired terminal block:

The video below compares both these units side-by-side:

Compared to a traditional enclosure panel based system, hardwired connections like power and sensors are tight and not easy to access.  If adjustments or maintenance needs to happen at these connection points, the device must be removed from its wall mount.

However, neither the GC2 nor GC3 is designed to primarily use hardwired sensors, and uses proprietary 345 MHz wireless sensors instead. Both models come with two hardwired sensor ports, although they are not commonly used by most installed systems.

Both panels come with a small integral battery pack for backup power, and while no specific duration claim is made, power lasted 8+ hours in our test, enough to address most outages.

Neither panel is furnished with a communication module or cell dialer, although the enclosure is designed with a removable side door where a factory unit can be installed without need of removing the unit from the wall.

While most basic sensors like door/window contacts and motion detectors are supported by both variants, the newer GC3 lacks support the older model claims:

Of note, the lack of the TS1 Keypad is a showstopper for many dealers, since the main panel itself must be centrally mounted for good wireless reception. The lack of a graphic keypad that displays system messages at points of entry is a major drawback.

Another major feature not available is WiFi communication, which despite being present in the hardware build of the GC3, remains disabled and unsupported by the factory, who claim a 'future firmware release' will activate it.

2Gig tech support claims that many of the features and omissions lacking in the GC3 are imminent releases, but they remain unaddressed in the year since release.  Further frustrating dealers, in the same period, other unrelated alarm platforms have been announced with no updates on progress.

For this reason, the less expensive GC2 with more sensor options is often preferred by many 2Gig dealers instead of the newer GC3.

Physical Overview of Both Panels

Despite having some noticeable difference between versions, both panels share many features and characteristics. The video below overviews the shared and general panels:

Aside from the larger touchscreen, the GC3 also claims more wireless zone (100 vs. GC2's 60) and 232 Z-Wave devices.  The video below contrasts those capacity differences:

Aside from the intrusion system, 2Gig touts it's panels as 'automation hubs', able to integrate to and control non-security devices like Thermostats, Lights, Freeze detectors, and Smoke/ Heat Sensors. These devices are controlled primarily through the panel's interface just like the alarm system. Our testing showed the Z-Wave hub to be reliable and consistent in control of connected devices with no extended lags or dropped connections to end points.

One interesting feature offered by both panels is to assign them as secondary controllers. This enables users to primarily use another hub as the central interface for home automation (ie: SmartThings or Wink) that support more device integrations and also work with the 2Gig intrusion system.

The programmable outputs of 2Gig's panels are especially beneficial for this type of setup, as the primary controller could be used to trigger a secondary controller that manages complex, entirely separate subsystems. Using a 2Gig controller as secondary would also include benefits like wireless coverage range, 'proprietary' support of 2Gig cameras and Z-Wave devices that may not be supported through the primary hub alone.

However, not all connected devices work with dual-controller setups.  For example, most door locks can only be paired to the primary controller directly, mitigating any potential coverage or rules benefits (ie: when 'away' mode is active, lock doors) of using 2Gig panels.

Wireless sensor enrollment and system programming are similar in both panels, and distinctively simpler than traditional enclosure panel and keypad based sensors, even those using hardwired sensors.

Unlike platforms like Honeywell Ademco Vista or Tyco DSC PowerSeries Neo where each sensor must be coded into a panel and wireless uses external modules, 2Gig's platforms are auto-detecting and enrolled via touchscreen.  The image below shows the panel's "listen" mode for auto-detecting sensors once batteries are inserted and the unit is hung in range. 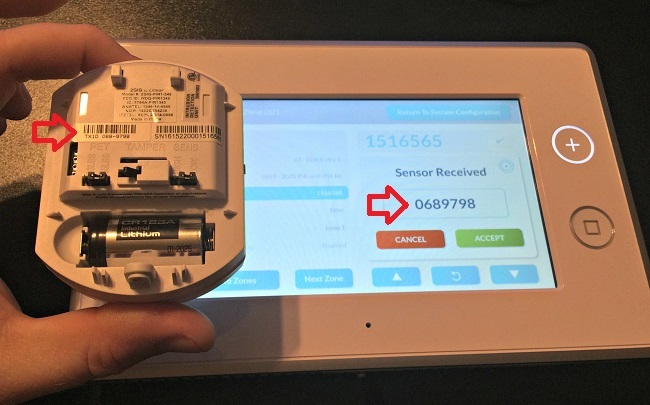 The video below shows this process in detail, taking just a few seconds per sensor:

A typical residential system can be programmed from scratch quickly, with the panel's optional 'walk test' feature permitting one-man confirmation of sensor performance. The programmatic walk-test is not available in most incumbent systems, and allows a single installer to also test all zones with additional help during install.

The notification process is similar to either panel, with a single touchscreen button selecting either a 'stay' armed (perimeter sensors only) or 'away' armed (all sensors) mode.

The panel begins a user-defined countdown clock, indicated both by visual timer and via voice commands: 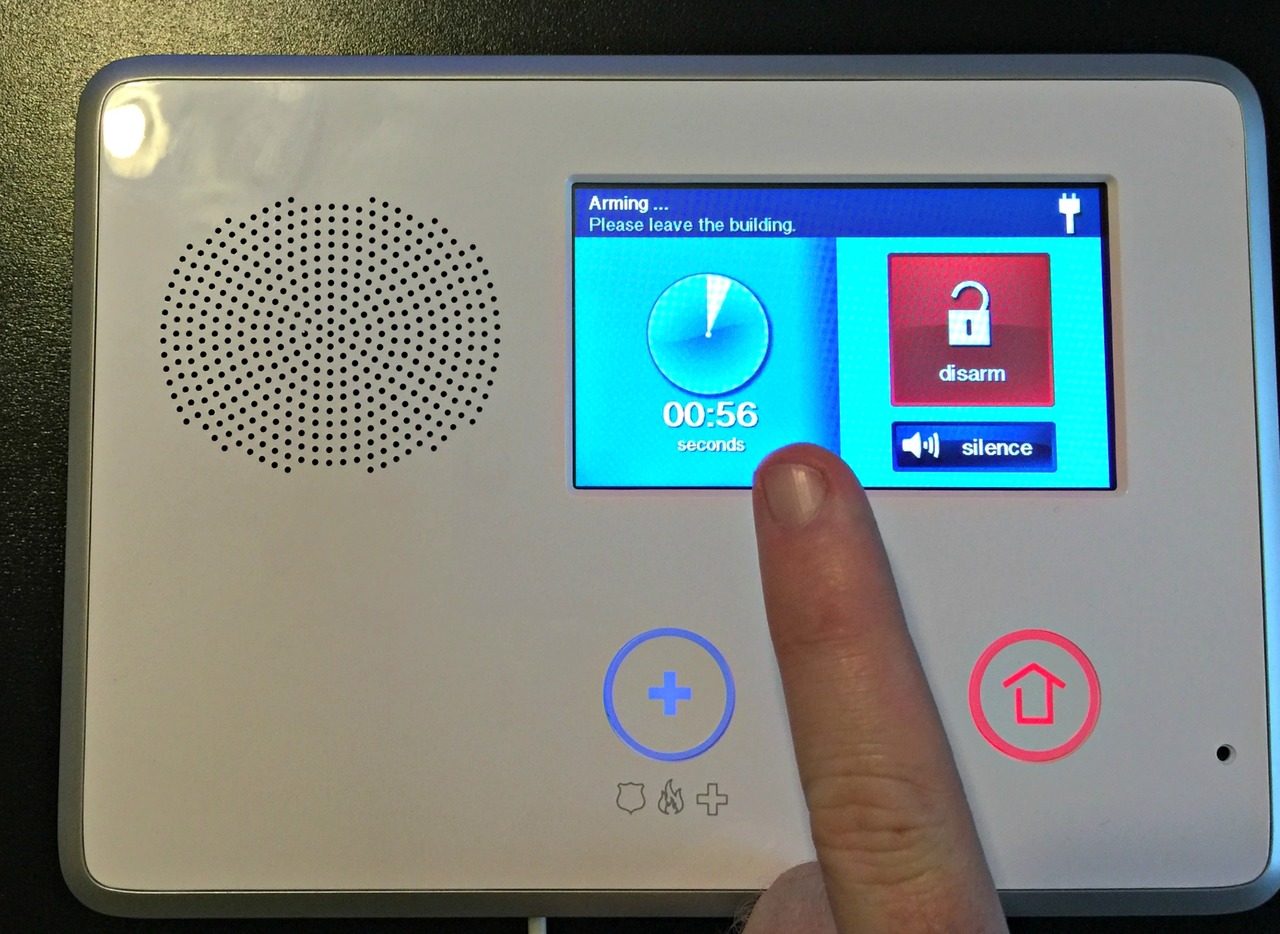 The onboard siren/annunciation is rated at 85 dBs, and lacks the typical intensity of external alarm sirens. While loud enough to be heard in a small single floor dwelling, additional wireless Z-Wave units are needed for large or outdoor alarm notifications.

A subtle but potentially important difference between panels is found in the plug-in wall transformers: 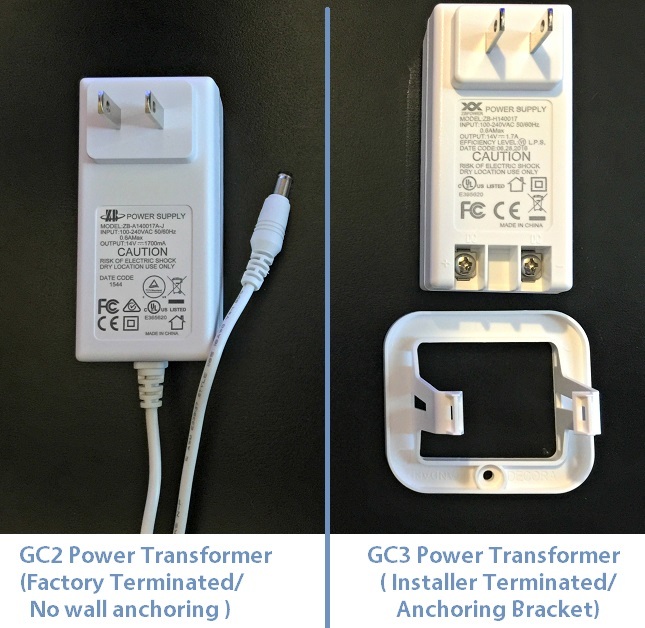 The older GC2 furnished adapter is factory terminated and unsecurable at the plug, forcing an installer who wishes to hide the cable and fish it to the panel's wall location to snip and splice the assembly, essentially destroying it. The transformer itself cannot be screwed into or fastened into place, therefore not meeting UL power requirements for intrusion systems.

This arrangement has been altered in the newer GC3 system, which features a bracket fastened to the installed transformer to secure it, and otherwise relies on the installer to fish/run their own power cable to the panel from screw terminals.

While this extra material is likely part of a 'professional' install, a DIYers user may find furnishing this cable an unexpected hassle, as none is furnished in the box.

2Gig GC2 and GC3 panels tend to be less expensive than other platforms and range at the low-end for even other starter residential kits.

In general, the older (but still widely installed) GC2 system is less expensive than the GC3, with kit including three wireless contacts, one motion sensor, a keyfob, and a panel running ~$300, with some old stock closeouts running ~$275.

The newer GC3 panel in a similar kit arrangement costs ~$400, a difference of typically $100 for a better touchscreen but poorer device support. While 2Gig is a dealer brand, channel controls are are fairly poor with many products listed in the 'grey' market or online.

2Gig is not the only combo integrated wireless system on the market.  In fact, most major incumbent brands offer a similar platform. While individual device support and panel feature vary, comparatively close platforms and costs for '3/1/1' kits (3 door/window contacts, 1 panel, 1 motion):

Interestingly, 2Gig does not offer a stock app-based remote control for its panels. Instead, the platform must use a third-party remote app offering from companies like Alarm.com or Moni. The monthly cost of these remote app services range from ~$20 - $50, with pricing increasing when 'add-on' services like video surveillance, cloud video storage, and 2-way audio support are added. 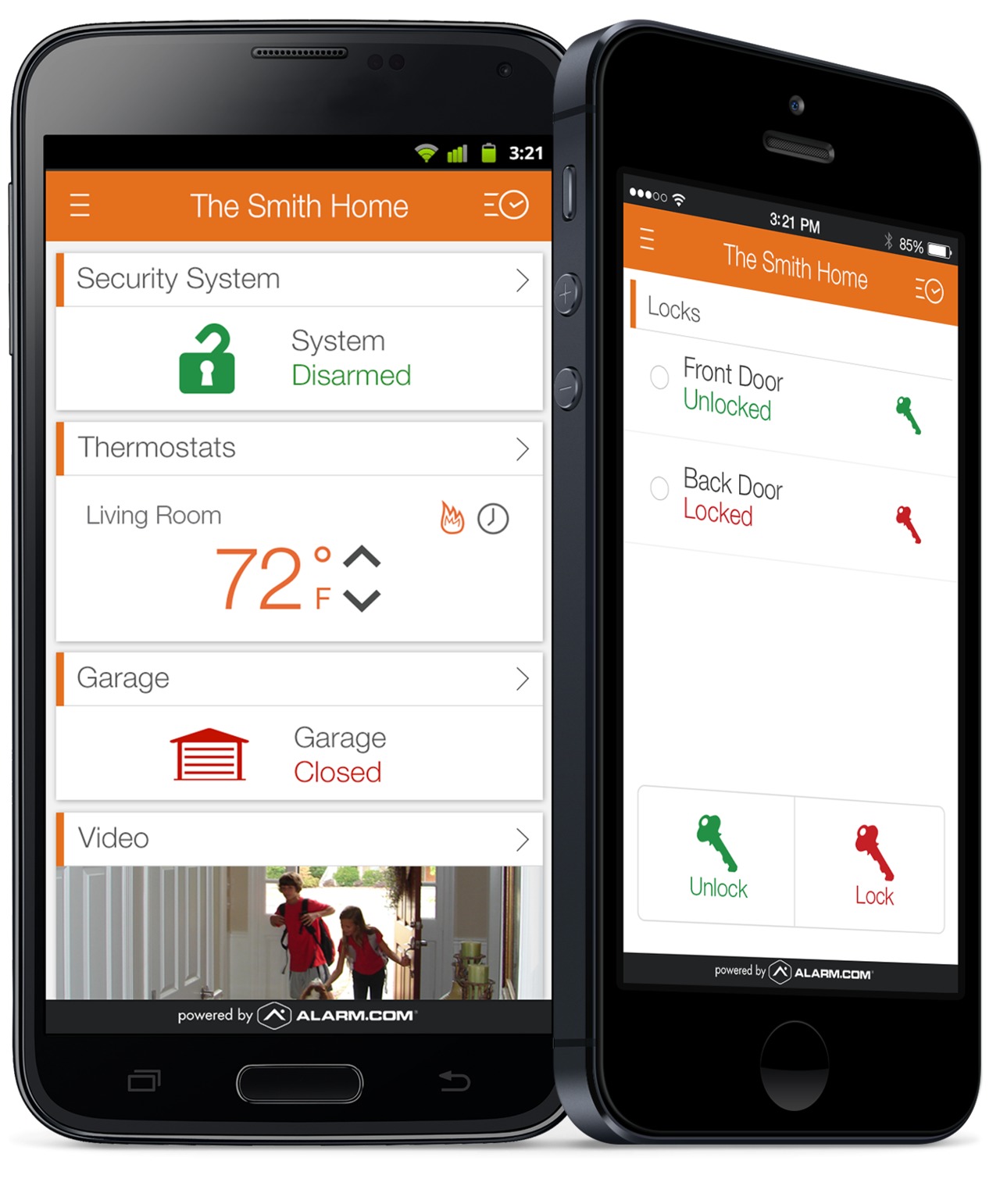 In terms of training and sales aids, 2Gig offers a free, app-based panel emulator that essentially gives customers or sales people 'try before you buy' access and allows for training new installers on configuration and programming without actual equipment. 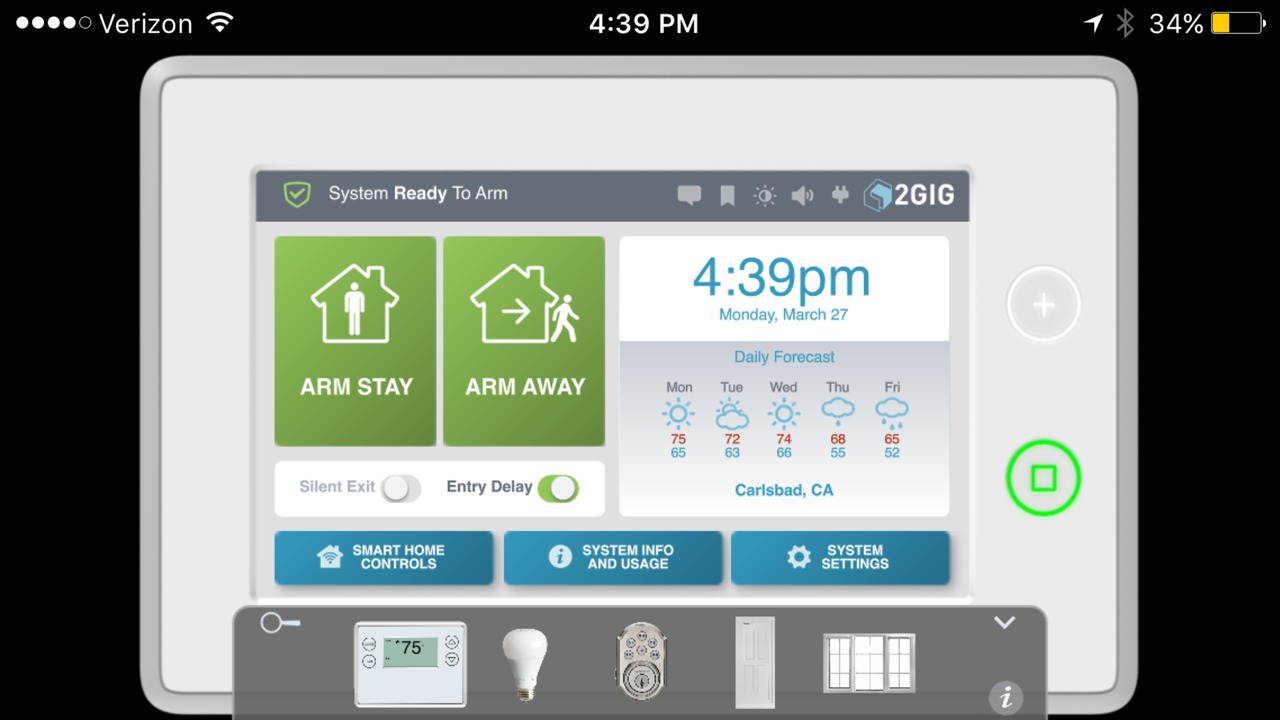 Given the notorious inexperience of alarm installers, the app offers 'hands on' experience with an example system, and that familiarity may help actual installs proceed faster in the field.

In order to use the central automation features of the panel, most often a proprietary monitoring service or a 'smart automation' service like Alarm.com or Moni will need to be used.  Unless a central station incorporates these remote user interface features, it will not likely be a legitimate candidate to monitor 2Gig panels.

In recent years, 2Gig has been acquired by Nortek who bought the company from a holding company for a reported $135 million [link no longer available]. That holding company also purchased one of 2Gig's then-biggest customers, alarm company Vivint as covered in our 2Gig Part Of $2 Billion Blackstone Intrusion Buy post.

Among 2Gig GC2 and GC3's biggest customers are national alarm companies including:

2Gig's installed base still includes many Vivint systems, who previously had an exclusive national supplier agreement with the company before acquisition.

Despite the relative appeal of the GC lines in residential installs, 2Gig has noted the lines lack many of the hardwired features and certifications required by commercial systems.  In response, 2Gig Expands Into Commercial Intrusion With Vario, which is a totally distinct enclosure panel based offering.

Nortek Security CEO Out, Company Pivoting on May 28, 2019
Nortek Security's CEO, Michael O'Neal is out, after 8 years leading the...
2Gig Gun Lock / Motion Detector Tested on Aug 17, 2018
Safer guns for families and an opportunity for security dealers to sell more...
Amazon Ring Alarm System Tested on Jul 16, 2018
Amazon Ring is going to hurt traditional dealers, and especially ADT, new...
Simplisafe 'All New' Generation 3 Tested on Feb 08, 2018
Feared by the traditional alarm industry, Simplisafe has launched its 'all...
"First Of Its Kind" Stove Knob Alarm Sensor (2GIG) on Jan 15, 2018
At CES 2018, 2Gig/Nortek announced the Stove & Grill Guard, a "first of...
The Interceptor Aims To Fix Vulnerability In Millions of Alarm Systems on Jan 08, 2018
Security executive Jeffery Zwirn claims a 'catastrophic' flaw exists in...
Testing DMP XTLPlus / Virtual Keypad Vs Alarm.com & Honeywell on Dec 13, 2017
DMP has a strong presence in commercial intrusion alarms, but not in...
Bosch G-Series Intrusion Tested on Jul 26, 2017
Bosch is one of the biggest names in intrusion, and the company's G-Series...
Alarm.com Tested on Jul 13, 2017
Alarm.com has become the dominant force in smart home / remote service...
Bosch B-Series Intrusion Tested on Apr 10, 2017
Bosch is one of the biggest names in intrusion but their B-Series panels,...
Alarm Panel Quiz - Honeywell vs DSC vs Bosch And More on Apr 07, 2017
Intrusion panels are hard to identify, are not always clearly labeled, and...
Z-Wave Automation Guide on Apr 10, 2012
The smart home automation segment has exploded.  Now with Axis releasing a...
Comments (17) : Subscribers only. Login. or Join.