But now, FLIR / Lorex and Hanwha / Samsung are blowing those offers away, with triple the number of cameras at the same price.

In this note, we examine the offers and how they are going to impact the professional / commercial market.

I always wonder how appealing the price must be to the average consumer, only to find out they have to run cables in their house.

My neighbor bought a 16 channel kit with 16 cameras, but only hung two cameras before stopping.

I'm not saying this is hard or complex, but it is work. Snaking cables and drilling holes in a hot attic isn't the DIYer's idea of 'simple', so I wonder how many of these kits get bought and never installed/used.

Before IP, I used to say the hardest part in this industry is getting cable from point A to point B.

The problem with the low cost cameras is that they devalue the integrator's ability to mark up product for install. This has been covered in different articles over the last few years with product markup and labor markup etc. The general consensus was that labor paid the bills but all integrators make the majority of their profit on the markup of items.

I see a lot of integrators eventually going out of business in 5 years time or so unless they increase their ability to sell financed systems, extended warranties, or maintenance contracts or add ons like video alarm monitoring or digital guard tours.

Tyler, I agree with your concerns.

My neighbor bought a 16 channel kit with 16 cameras, but only hung two cameras before stopping.

Neighbor: Yeah, the first couple were pretty easy: right up the flew, onto the roof and then into the gutters, but now I'm kinda stumped. I figure for the backyard I can use the dryer vent, but after that... Hey wait, don't you do something like this for a living?

BR: Heh, heh. Not really. I'm actually in Access Control. Let me know if you pick-up an iris scanner or a man-trap, I'll be right over...

I would expect that many consumers who purchase these kits from Costco, Wal-Mart or the internet will see that they're not up to the challenge of installation, like Brian points out, and will pick up the phone to call for help.

I pass on these types of calls as I don't want to be on the hook for issues that arise later on, such as equipment failure, camera adjustments, complaints of poor image, unrealistic expectations, etc. If you do get involved in this type of arrangement, then a clear and concise agreement should be executed first. Otherwise, any hiccup in the system will result in a call for service with the implication that your installation, not the equipment, was the cause of the failure, and the consumer would expect a "no-charge" repair or replacement. It would not be worth it for me to take on this type of client.

The consumers / DIY'ers who'll buy these kits probably would never have considered a professionally installed system in the first place, so I'm not worried about missing an opportunity.

[Note: Poster is from Q-See]

4, I added a note that you are from Q-See. That said, since it is germane to this discussion, I've left it in.

It seems forever ago, but there was a time when a single HD camera for $500 was pretty amazing.

It seems forever ago, but there was a time when a single HD camera for $500 was pretty amazing.

Even today its still amazing, just for different reasons...

Wait a second.. I thought I saw a Hanwha set for sale here darn it lied to again

Weak threat, large pain in the backside as far as when you are talking to these "customers".

I voted moderate because even if the DIY guy isn't my target customer, these kits are still pulling the overall market downward in overall cost expectations.

"If you can get a decent 12 cam system at a store for $700, then surely a really good one can't be more than double that, right?"

Reply Edit
Delete Create Issue
Create Topic
Ban post
06/08/16 01:18pm
Moderate threat but more of a pain - many of our customers would not consider looking at Walmart or Costco for product. But for the ones that do, John is right, we have to sell both the integrator and the end user on why our product is in some cases double the price. Definitely a pain in the backside for those who sell into the SMB market.
Reply
Agree Disagree Informative Unhelpful Funny Fav

I am very familiar with the OEM manufacturing company for the FlIR/Lorex brand out of Shenzhen. I'm friends with the factory owner and I asked him if I could resell some unbranded product to my neighborhood who's been having a string of thefts recently. Mostly homes between 2500-7000 sq feet.

After posting an offer on the neighborhood Facebook page I had over 130 committed buyers. This was not to make money as much as it was to get 1080p video all over the place to catch the criminals. Problem was the install. Nobody wants to install these units themselves once they really think about what is needed for wire. For finished homes, even integrators backed off because of the complexity of the work. Most of the homes even have structured cabling to each room, but install pricing kept coming in 3-4X the price of the system.

Until there is a real, cloud based wireless solution (Mesh based, not single point of failure WIFI) which is affordable, this market is always going to remain small. These packages are still a viable threat to integration/distribution, but I believe that the install side is going to remain strong. First person to figure out how to sell a system at Costco which includes the fixed install of each camera is going to be the big winner. There are so many variables that this is nearly impossible until someone works out the wireless technology. 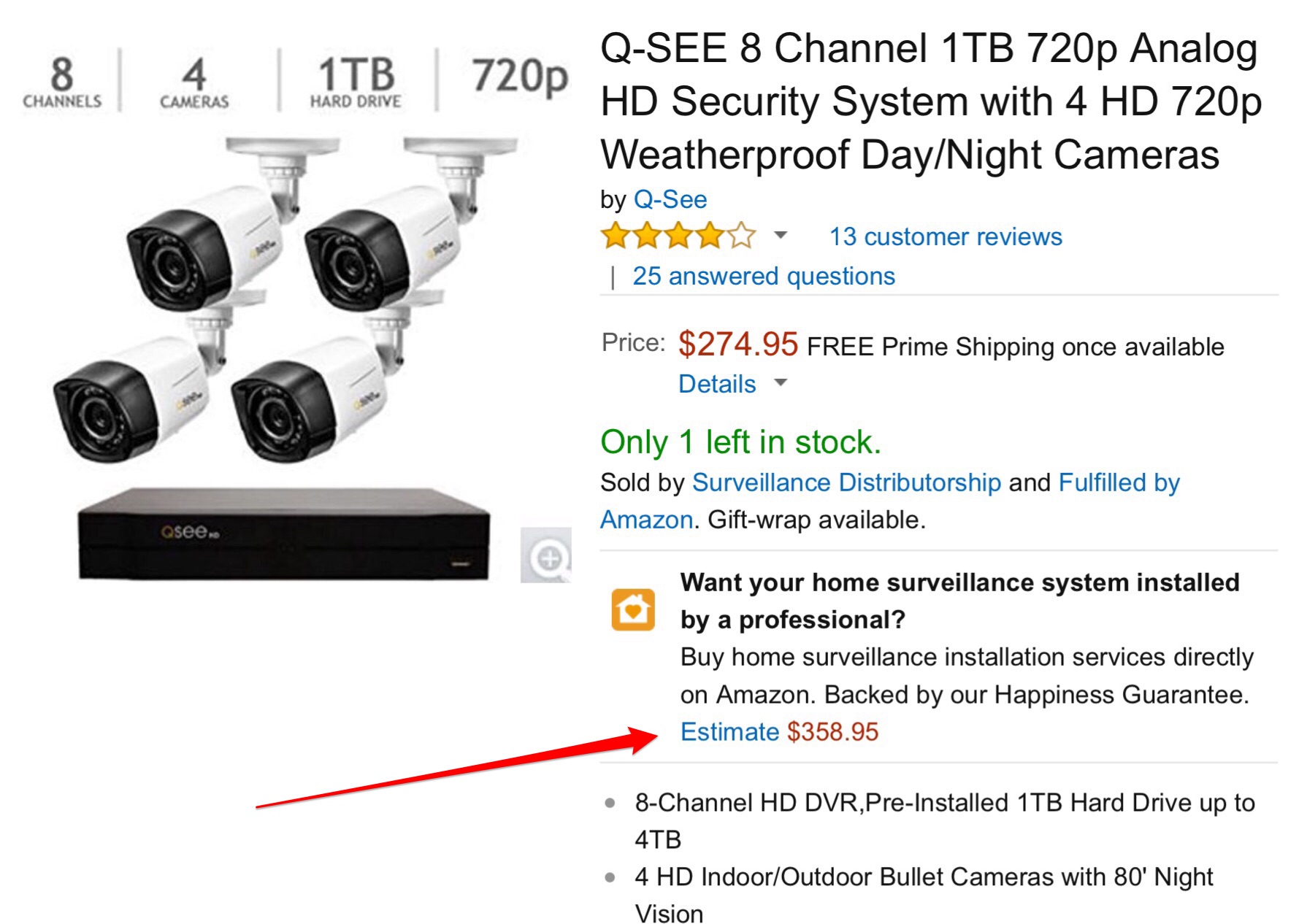 There was an article about a similar service not too long ago on here as well. I'll try to locate the link on IPVM and edit my comment. This is definitely where things are headed for the low end of the market.

"The Company The Industry Always Feared Would Arrive" Is Here

There are so many variables that this is nearly impossible until someone works out the wireless technology.

This article is part of IPVM's 6,743 reports, 909 tests and is only available to members. To get a one-time preview of our work, enter your work email to access the full article.