The Q-See HD IP kit may be the hottest budget product around. At just $699 online for (4) 720p HD IP IR cameras plus a 1 TB NVR with a built in PoE switch, it is an absurdly inexpensive. It is hard to buy a single low cost NVR unit for this price, forget about getting 4 HD cameras thrown in.

But the big question is - how good is it really? How much do you lose by not going for a 'professional offering' like Axis + Milestone or an all Avigilon solution or Arecont + Exacq?

Q-See surveillance kits are readily available on the internet and at warehouse stores such as Costco and Sam's Club. "Normal" price is ~$999 USD, but the four camera kit with recorder can often be found on sale for $699 [link no longer available]. Individual cameras are also available for $150. At $699 for the four camera kit, users are essentially paying $100 for the NVR.

This is an attractive offering for those wanting small HD systems on a budget. It combines setup simplicity (built in PoE switch / automatic camera connection) with HD video, 3rd party support, and IR illumination at a ridiculously low price. There's no other combination from major brands that we know that comes close to this, either in price or functionality. You could certainly match these features but at double or triple the price. And since Q-See's support is solid, it's not as is you are trading low price for being on your own.

The biggest weakness for mid size security users is the rudimentary search / investigations / export features, which will make the system cumbersome to use if regular incidents occur.

Beyond that, obviously, as you get to bigger systems that need more complexity functionality, Q-See is harder to justify but for someone looking for a few cameras, this is quite attractive.

This video reviews the physical layout of the Q-See NVR. Key points:

This video shows how cameras may be connected to the QC804. Key points:

There are three methods of controlling the NVR locally: mouse, front panel, and IR remote. Keyboards are not supported.

This screencast reviews these methods:

In this video, we review key usability issues, primarily in search / investigations:

In order to test the performance of the included 720p bullet cameras (Q-See QCN7001B), we shot them out against competitive low cost models, including the ACTi D11 and Pelco Sarix IL10. We also used the Axis M1114 to provide readers a familiar baseline.

In full light, the QCN7001B performs similarly to other low-cost cameras, such as the ACTi D11 and Pelco Sarix IL10. Details are clear, with little artifacting. 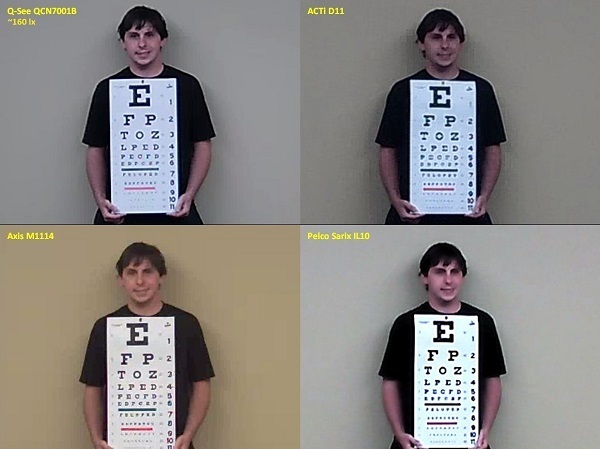 Lowering lights to about 30 lux, the Q-See camera remains relatively unchanged, while artifacting and noise increase in the D11 and IL10, reducing details somewhat. 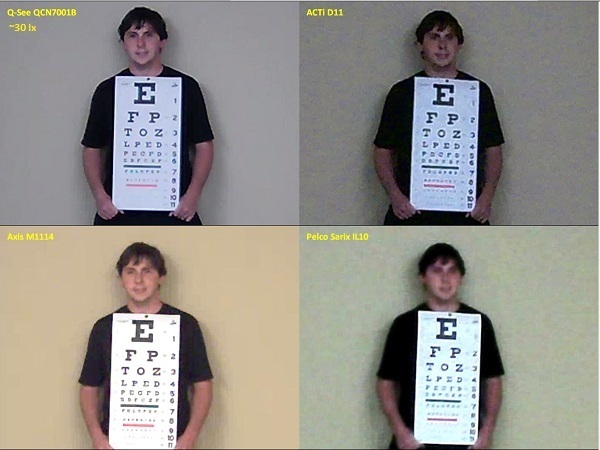 Finally, in our dark, <1 scene, the QCN's IR has activated (other cameras were color only with no illumination), easily illuminating the subject at ~35' without severe blooming or overexposure. However, the increase in artifacting around the edges of the subject is notable, though the chart is still legible to line 3. 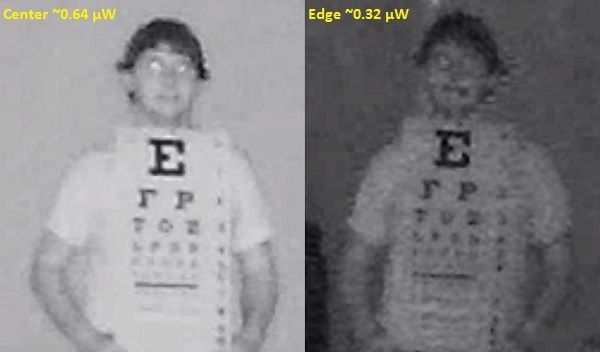 Q-See claims "100 feet of night vision" in their marketing for th QCN7001B. However, we found performance was closer to about 45', similar to other Dahua bullets we have tested. Notably, Dahua claims only 20m IR range on the HFW-2100N, the model Q-See relabels as the QCN7001B.

At 100', the subject is only minimally illuminated, at best, with only detection possible. No details are visible, only a moving object in scene. 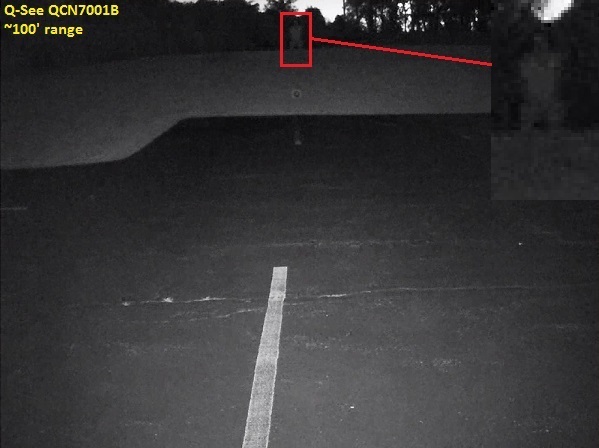 Only at ~45', less than half the claimed range, does the subject become clearly illuminated. 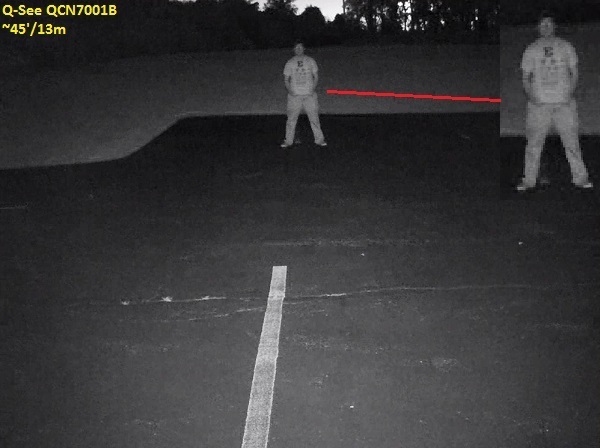 Note that these measurements were taken with default settings, using VBR compression with no cap and one I-frame per second. Compression levels were left defaulted, as well, and all averaged between 26-28.

Since quality of technical support is a key concern when dealing with OEM products, we contacted Q-See technical support multiple times, with questions ranging from basic to advanced. On simpler questions, such as how to export video or upgrade firmware, their support was helpful and fast, and followed up via email quickly. On more advanced topics, such as connecting ONVIF cameras or connecting their camera via ONVIF to a VMS, they were less helpful, though level one tech support rarely knows answers to these detailed questions. For the target market of the QC804 kit, Q-See's tech support is likely more than sufficient.