They were Silicon Valley's chosen one.

The company who was going to disrupt access control, backed by the biggest incubator and cheered on by the tech press.

However, as IPVM test results showed, the product had massive problems.

And now, Lockitron is admitting failure.

In this note, we examine what went wrong, what they are doing now and how this impacts the smart lock market.

Lockitron aimed to put the old and dusty door lock market on notice by introducing a networked access controller to residential and small business customers. Their first Lockitron offering was a massive crowd funding success story, where the company turned nothing but an idea in over two million dollars worth of presales in just a few months.

Core features of the crowd funded Lockitron included complete smartphone management, where a user could be hundreds of miles away yet still lock or unlock an opening. Even better, temporary access could be shared with other users.  Visitors did not need keys, just mobile permissions to enter granted by the app.

Moreover, Lockitron claimed that it could be installed by anyone, it worked with any door lock, and users would be up and running in minutes. The $179 price, while high, still hit the sweet spot with the DIYers and the product sold more than ten thousand units in mere weeks.  Indeed, the product won huge accolades and hype as an example of how Silicon Valley ideas and Crowdfunding support could revolutionize established markets like door hardware.

However, Lockitron could not solve several problems that caused early reviews to pan the offering.  Even after several delays and rework batches, the product never overcame the following problems:

Now, Lockitron is "moving all our efforts to manufacturing Lockitron Bolt", a new separate product replacing the initial offering.  The new unit is an entire replacement lock rather than a retrofit device. The new design strips out some of the problem features, and overall is a smaller unit: 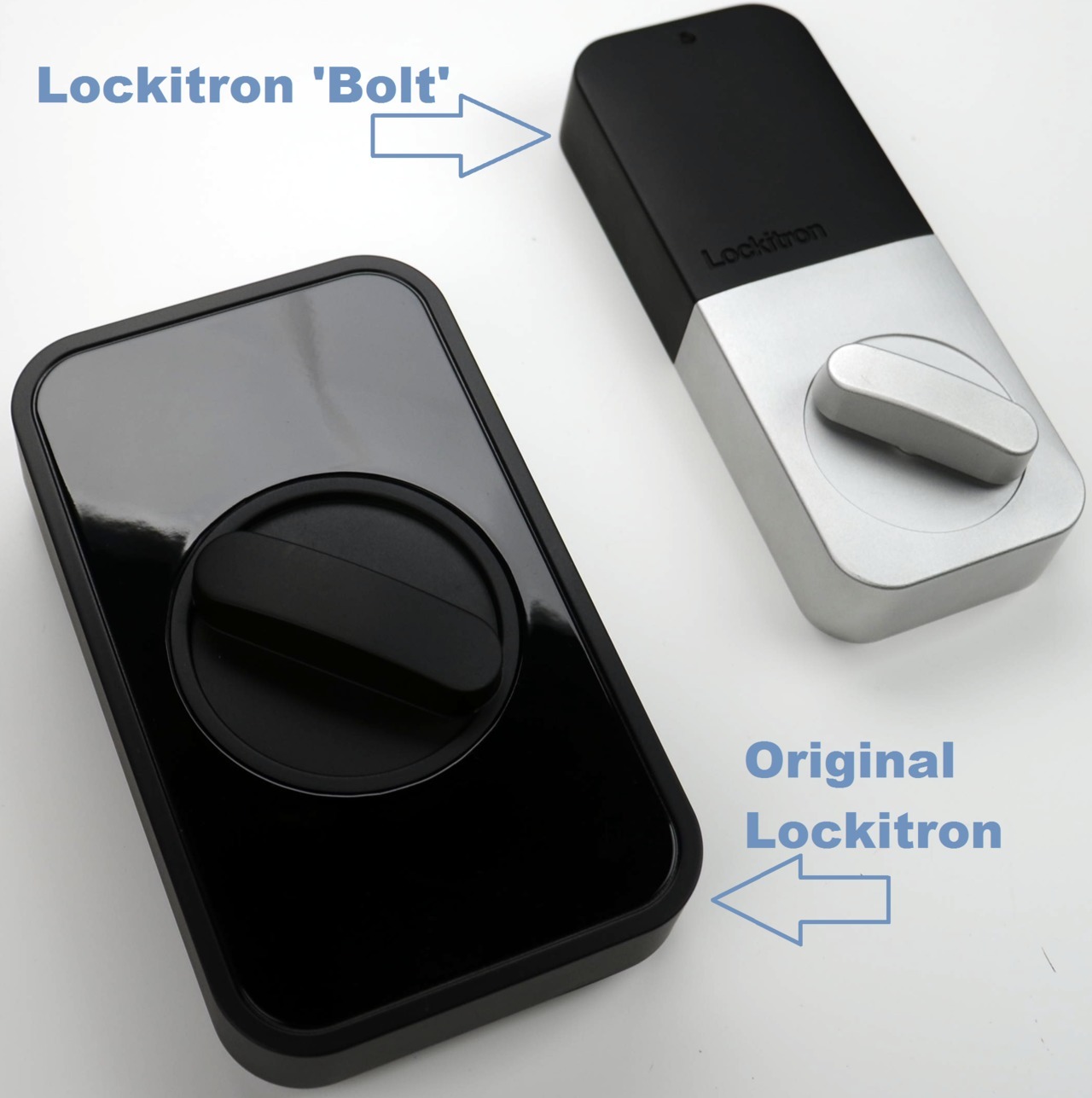 With a reduced price of $99, the new Bolt promises the same basic features of the original with the following changes:

The company did not ship all the initial orders for the initial Lockitron, and instead is asking early backers to migrate their orders to Bolt that is planned to start shipping in a few months.

The Future of Smart Locks

The failure of Lockitron to produce a successful product should be a sobering example of the difficult realities of design, manufacturing, and bringing ideas to market in access control (and beyond)!  Among the key lessons learned:

Doors are Complex: Despite being simple to work and common, the actual mechanical aspects of a door and lock are complex.  Not only is there a wide variety of hardware in use, but the ease of operation and condition of that hardware can quickly complicate a simple idea. Underestimating typical binding, bending, and wind buffeting on doors contributed greatly to the doom of Lockitron.

Good Ideas Are Not Enough:  Even when a 'game changing' concept hits the market and is met with millions of dollars in support, a glut of hard work and potential showstoppers still remain before commercial viability. Lockitron has learned this the hard way, and has expended most of the good will and enthusiasm the product won early on.  Only time will show if Bolt helps the company deliver.

Will other smart locks fall victim to the same problems?  There is good chance.  Many of the competing offerings like August, Goji, and Kevo have experienced similar delays, although none appear as drastic and dramatic as Lockitron.  Overall, users of smart locks should temper their excitement with a heavy amount of skepticism until the segment matures.

Ambitious Mobile Access Startup: Openpath on May 24, 2018
This team sold their last startup for hundreds of millions of dollars, now...
Assa August Smartlock Pro Tested on Nov 07, 2017
Failures and set backs in the smartlock business have been commonplace...
Assa Abloy Acquires August on Oct 25, 2017
The mega access control manufacturer, Assa Abbloy, has acquired [link no...
Smartphone Controlled Kevo Lock Tested on May 04, 2017
Smartlocks are a growing market, with millions sold. Kwikset's Kevo is one of...
Ring Pro Tested on May 26, 2016
This year, Ring received $61.2 million more of VC funding. For a video...
The Brooklyn Access Startup: Kisi on Apr 12, 2016
Straight from the hipster startup hotbed of Brooklyn comes a new IP access...
Vacation Rental Access Control: The 'ResortLock' on Feb 20, 2015
Controlling access to your vacation home or rental property is the vision of...
Comments (10) : Subscribers only. Login. or Join.