In this report, we break down pricing / cost trends for:

Manufacturers in this survey include:

The study focused on dome cameras, as they are the most common used form factor in surveillance.

The overall average price of IP cameras surveyed has dropped from about $835 to $630 USD, a decrease of ~24%. This is consistent with the average price integrators report charging.

Here are the key reasons for this decrease:

Finally, the majority of manufacturers offer equivalent models today for prices less than their 2010 counterparts. In some cases these models include advanced features such as super low light performance or true WDR for lower prices, as well.

Back in 2010, it was nearly impossible for regular consumers / users to get IP cameras direct from China. Now, it is commonplace, with spam emails offering sub $50 IP cameras regularly. Since their overall support / warranty / quality limitations are notable, we do not see them as a major competitor but certainly some will be attracted. See: Testing $29 ONVIF IR IP Chinese Camera

Non-IP HD has fallen far deeper than IP and is poised to have a significant impact.

In 2010, there was a limited amount of HD-SDI / HDcctv cameras available and pricing ranged from ~$500 for no-name offerings to $1,000+ for Speco. It was not competitive with IP camera pricing nor product availability.

Now, in 2014, the 'next generation' of non IP is radically less expensive. As our Dahua HD-CVI test and Q-See AnalogHD kit test show, non-IP HD cameras at $50 or less from major brands with support are becoming commonplace.

In the next 3 years, we believe these will put increasing price pressure on the IP camera market as low to mid scale applications increasingly switch for the price savings.

Average cost of a 720p/1.3 MP indoor camera was in 2010 ~$612 USD. Today, this has dropped by about 27% to $445. This is due to manufacturer equivalent model pricing decreasing in most manufacturers. Lower cost compact domes have also been introduced, with manufacturers such as Dahua and Hikvision offering models for under $200.

Note: we only count manufacturers as WDR if they use multiple exposures. 'Electronic' WDR is excluded as fake / ineffective. Background: WDR Tutorial

Integrated IR was offered in only about 10% of models in 2010. Now, about 30% of models surveyed offer it, with all manufacturers in this list producing models with built in IR. Average price has also notably decreased, from ~$950 to ~$705 (~26%).

Integrated IR pricing varies significantly though, with many of the absolutely lowest cost cameras including it (for $150 or less) as well as some of the most expensive ones. For integrated IR, the key differences are distance covered and auto adjustment of IR.

P series pricing has decreased, as well. In 2010, the indoor, non-vandal P3304 sold for $630. The current indoor non-vandal model, the P3354, sells for $560, while now including improved Lightfinder low light performance.

In ~2012, Axis made a strong move to expand their low cost offerings. There has been little subsequent movement in the past 2 years as new Axis product releases have focused on the high end of the market.

Avigilon's lowest priced current domes (excluding the MicroDome) are about 10% more expensive than past models. Their original JPEG2000 dome line was all IP66-rated, with no indoor only models as they offer today.

In 2010, Dahua was nearly unknown in most of the world, with very few sales under their own brand. Now, they have increasing presence, both under their own name and via OEMs such as Q-See and IC Realtime. Partly this is thanks to their pricing, some of the lowest in the industry.

Hikvision was only modestly better known than Dahua in 2010, with low prices compared to major competitors, but cameras generally considered to be underperforming and unreliable. In 2014, however, Hikvision's performance and reliability have both improved, and pricing has remained generally low compared to competitive models.

Note that all of Sony's outdoor models, then and now, included built-in IR.

Sorted by lowest to highest price:

Sorted by lowest to highest price: 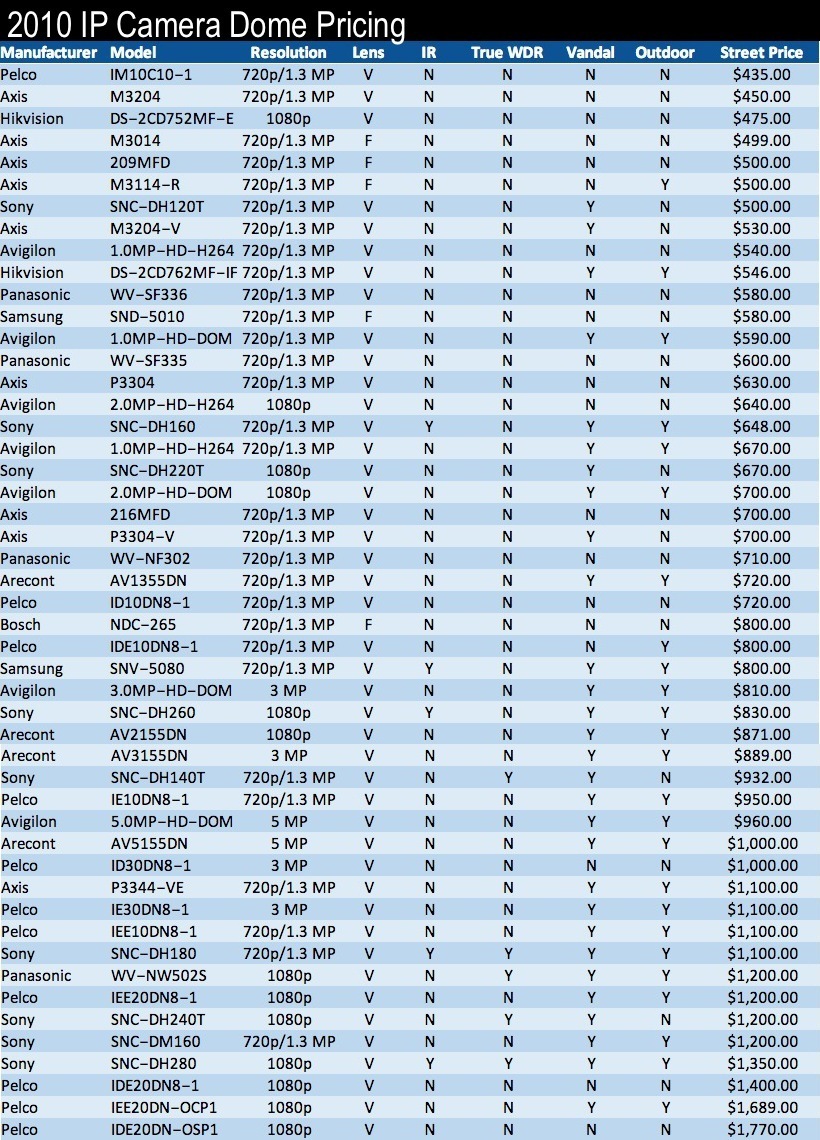 Lowest Priced Auto Focus Cameras on Aug 06, 2015
Auto-focus has historically been regarded as a high-end feature, found on...
Why is Avigilon's Stock Falling Like a Knife? on Oct 08, 2014
A week ago, a prominent Avigilon investor admitted, "Nobody wants to hold...
Pelco IP Camera Price Cuts on Jul 24, 2014
Starting July 1, 2014, Pelco has made significant price cuts across their mid...
Avigilon CEO Looks To Rebuild Investor Confidence on Jul 02, 2014
Avigilon's CEO has been making the circuits seeking to rebuild investor...
Panasonic Slashes IP Camera Pricing on Jun 27, 2014
Panasonic has slashed prices on many IP cameras by 20% or more in the past...
Comments (5) : Subscribers only. Login. or Join.