Dome cameras are popular. But how popular?

IPVM has conducted a global survey of integrators to determine why and what percentage of cameras they deploy.

In this note, we reveal what percentage of dome cameras are deployed, how that varies across integrators and the 5 top drivers for choosing dome cameras.

Domes are roughly 2/3rds of all cameras integrators use. 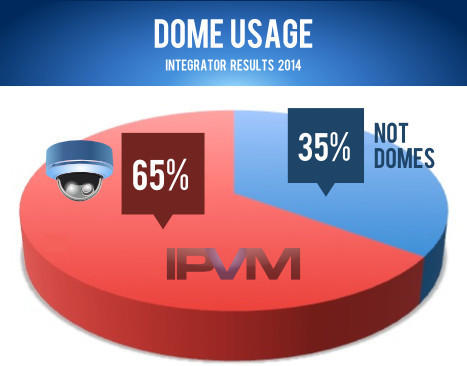 So not only are domes popular, they are the most common form factor in surveillance.

Quite a number of integrators almost always used dome cameras, with a third of all integrators using domes 80%+, as shown by our breakdown of dome usage across integrators: 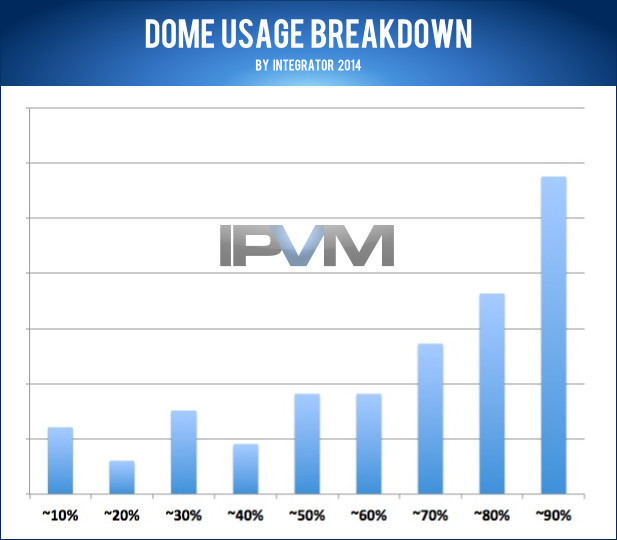 Only a few integrators largely stayed away from dome cameras.

Integrators explained when and why the use domes:

With domes cameras, many integrators emphasized that it is hard to see where the camera is aimed since the bubble / housing obscures the direction the lens is positioned. Comments included:

Improved aesthetics / looks was also a common reason, as dome cameras tend to stick out less than box or bullet cameras. Moreover, minidomes, a category of domes, strengthens this even further (look for our upcoming stats on mini vs full sized domes). Comments included:

Quite a few integrators emphasized their use of domes indoors. While many domes are outdoor rated and can be used outdoors, the combination of improved aesthetics and low cost make domes a common choice, especially indoors. Comments included:

A number of integrators noted how domes help minimize tampering, since the camera is encased inside its bubble/housing. Comments included:

Finally, a few mentioned that dome cameras simplified installation, compared to other form factors, given that everything is built in. Comments included:

Our survey also revealed a significant split between mini and full size domes. In an upcoming note, we will release the statistics for that comparison and the reasons why integrators choose one vs the other.

Camera Form Factor Guide on Mar 16, 2018
When selecting surveillance cameras, users may choose from a number of...
Dirty Dome Camera Test on Nov 28, 2016
Dome cameras are the most widely used type professionally but many note that...
Axis, Time to Retire The M3004 on Jan 25, 2016
The Axis M3004-V represents an important milestone, both for Axis historical...
Ranking The Lowest Cost True Minidomes on Jun 10, 2015
Minidomes are popular. But lots of manufacturers fake being truly mini. To...
Axis Cuts Prices 2015 on Mar 09, 2015
Axis has cut prices on a number of their most popular markets.  In this...
IP Camera Costs Comparison and Trends 2010 - 2014 on Jun 25, 2014
Over the past 4 years, the average price of 100+ IP cameras surveyed has...
Google Acquires Dropcam For $555 Million on Jun 20, 2014
Google, via its Nest Labs subsidiary, has acquired home security specialist...
Bullet Camera Usage Statistics on Jun 20, 2014
Bullet cameras seemingly came from nowhere. Only a few years ago, IP bullets...
Why Integrators Hate Cube Cameras on Jun 16, 2014
Though cube cameras may be common in online retail stores, they are the...
Box Camera Usage Statistics on Jun 12, 2014
Box cameras are the 'original' surveillance form factor. But how are they...
Comments (2) : Subscribers only. Login. or Join.