Hikvision Lobbying Against And Preparing For Potential US Sanctions

Hikvision has been lobbying against and preparing for potential US sanctions, according to US government records, financial filings and partner documentation IPVM has found.

In this report, we examine what Hikvision has done and how it is positioning itself.

Hikvision has come under scrutiny for its massive surveillance deals in Xinjiang equipping cities, mosques, and 're-education' camps. Since September 2018, reports have said Hikvision has been considered for sanctions by the US government over this, and, in May 2019, the Trump administration was widely reported to be closer to doing so, though it has not yet happened.

However, Hikvision has been taking this seriously.

Hikvision could be barred from using most US technology if it is added to the 'Entity List', the same sanction imposed on Huawei. In the case of even stricter Magnitsky sanctions, Hikvision could be completely banned from the US and its assets there frozen. 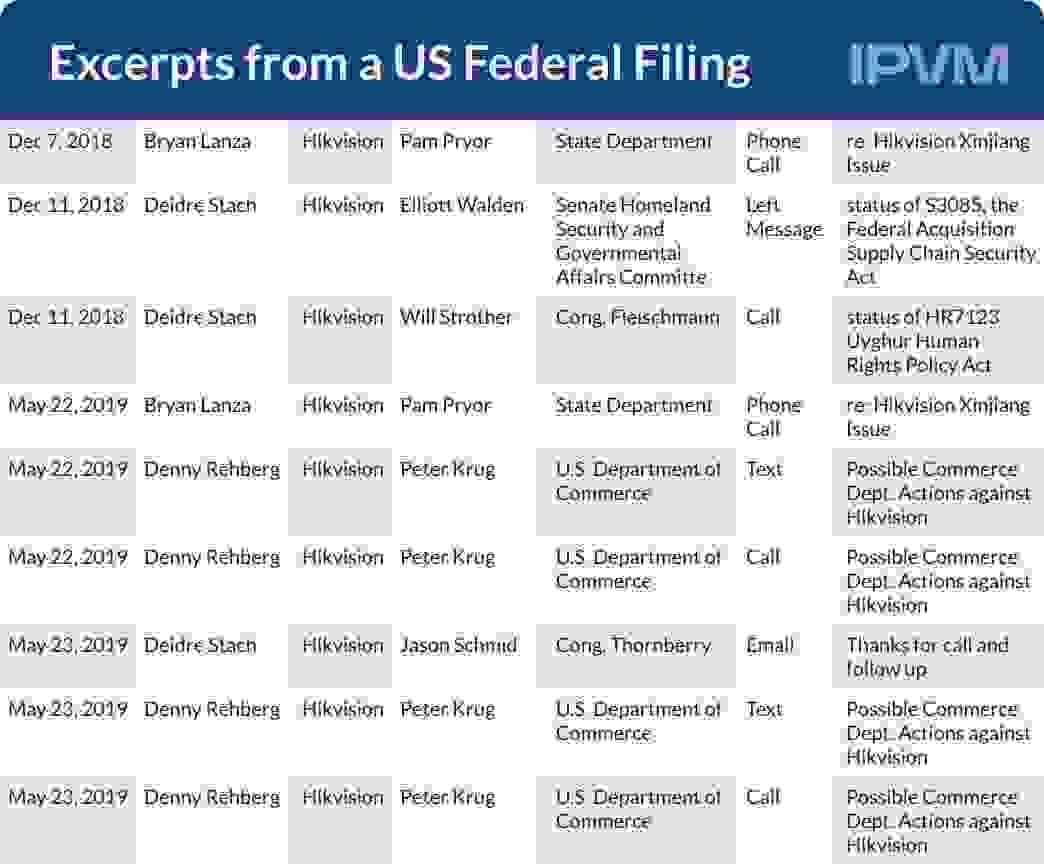 The contacts are the following:

Louisa Greve, the director of external affairs at the Uyghur Human Rights Project, told IPVM the fact that Americans were helping Hikvision on this issue was "horrifying":

It's horrifying for Uyghur Americans to know that fellow Americans [are] helping Hikvision avoid accountability for its actions. No company should get away with complicity in crimes against humanity. People are dying in detention, and Hikvision's lawyers and lobbyists need to think about the judgment of history.

Aside from activists' criticism, the concrete impact of this lobbying is difficult to discern, with no more public information disclosed and no response from Mercury or the government officials who were lobbied to our questions (Hikvision declined to comment).

The Xinjiang lobbying does show Hikvision itself is taking the sanctions threat seriously. From December 2018 to May 2019, Hikvision spent on $659,441 Mercury alone, according to the FARA. Bryan Lanza, the lobbyist handling many of Hikvion's Xinjiang efforts, lobbied for China telecoms giant ZTE last year after it was sanctioned by the US, a decision that was soon reversed, saving ZTE.

I do believe that with the uncertainty of this [...] two customer might get onto Entity List, they will definitely try to build up the inventory level to their comfortable.

Before Huawei was sanctioned by the US, it had reportedly built up 12 months' worth of US parts. This is because Entity List sanctions bar companies from selling US-made components to covered companies.

there has been news about the U.S. export entity list sanctions. So it is a safe and stable move to stockpile raw components. There's no sanction today, but maybe it will suddenly come tomorrow. We need to ensure our productivity to be sustainable. Although we have alternative suppliers, it takes time to switch from one supplier to another. New suppliers also need time to organize production for us. Increasing the stockpile will give us the elasticity for our business operations. [emphasis added]

Hikvision has also added new language about sanctions to its terms and conditions, indicating concern they may get sanctioned if their equipment is found in the wrong place:

COMPLIANCE WITH IMPORT AND EXPORT REGULATIONS Customer hereby confirms that it shall be in compliance with any relevant import and export regulations, or economic sanctions including but not limited to the Export Administration Regulations of U.S.A., and U.S Economic Sanctions for use, sell, transfer, export or reexport of those Products. Customer further confirms and undertakes that the Products shall not (i) be resold to Target Countries’ government buyers or to any other buyers in Target Countries for use by such governments to engage in surveillance, censorship, or network disruption activities, or (ii) be resold to any individual or entity that is listed on the Specially Designated Nationals and Blocked Persons List (an “SDN”) or the Foreign Sanctions Evaders List (an “FSE”) both maintained by the Office Of Foreign Assets Control of The U.S. Department of the Treasury, and the Denied Persons List or Entity List maintained by the U.S. Department of Commerce(all together as “Black List”), or is controlled or fifty percentage or more owned, directly or indirectly, by one or more Black List(s), or(iii) be resold or used in relation to weapons of mass destruction, or the development and/or production of chemical or biological weapons, or activities in the context or related to any nuclear explosive, or unsafe nuclear fuel-cycle activity. [1] “Target Countries” means the countries and territories covered by the most comprehensive territorial U.S. economic sanctions, currently, the Crimea region, Cuba, Iran, North Korea, and Syria [emphasis added]

A common way for the US government to sanction a company is by finding deals with countries like Iran and North Korea (as happened with Huawei and ZTE.) These sanctions are much easier to impose compared to ones for doing business in Xinjiang, where there are currently zero US regulations preventing commercial activities. The updated Hikvision T&C's repeated mention of "target countries" shows clear concern for such a scenario.

We asked Hikvision for responses to all the above but they declined to comment.

It is difficult to tell if such sanctions will actually take place, with the US-China trade war a major factor. Xinjiang sanctions were reportedly "ready to go" in June but shelved due to trade negotiations (this happened in May as well). Meanwhile, China has reportedly insisted on the removal of existing Huawei sanctions as part of any trade deal. While Hikvision's direct deals in Xinjiang are documented and not in dispute, the rising conflict between these two countries is a central factor.

Either way, Hikvision's lobbying, inventory, and legal language all show the firm is preparing for US sanctions. This is certainly a justified move from the company, as such actions would threaten not only its reputation but also its supply chain. If Hikvision itself is preparing for such a scenario, its customers should take notice as well.