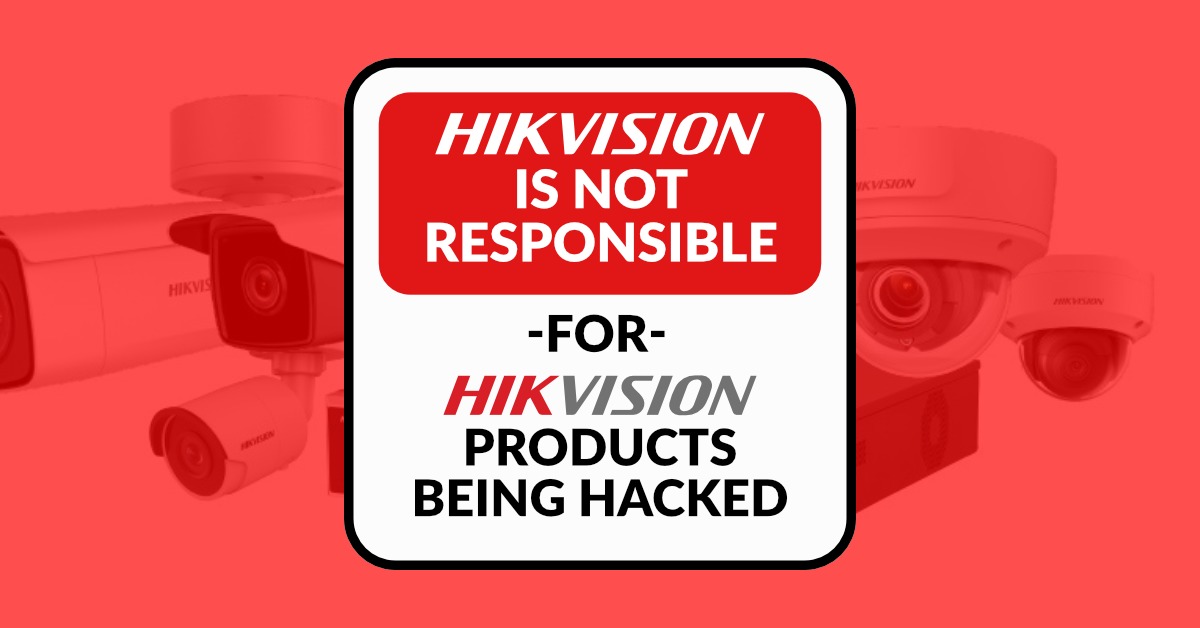 The language is inserted in a legal disclaimer section included in Hikvision documentation such as user manuals and quick start guides in the box: 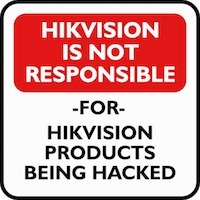 HIKVISION SHALL NOT TAKE ANY RESPONSIBILITES FOR ABNORMAL OPERATION, PRIVACY LEAKAGE OR OTHER DAMAGES RESULTING FROM CYBER ATTACK, HACKER ATTACK, VIRUS INSPECTION, OR OTHER INTERNET SECURITY RISKS

This language is not found in documentation prior to the hacks (such as the 5.2 user manual), but is now commonplace in the 5.3 and later documentation, that was released after the numerous hacking issues.

While product warranties have general liability limitations, it is quite uncommon for camera manufacturers to have explicit language excluding cyber security. Of course, this is even more significant given Hikvision's poor cyber security track record and Hikvision's industry worse cyber security rating from integrators.

It is, minimally, ironic, that an organization so strong at cyber hacking would seek to use the International legal system to protect itself from the consequences of their own products being hacked.

If you are an integrator supplying Hikvision or an end user with Hikvision products deployed, we urge you to consult with your attorney to understand the legal risk and ask Hikvision to remove this clause.

Not only is it uncommon but the process of how Hikvision has simply added it to product documentation is questionable (e.g., Are Hikvision products bought before 2015 covered by this? Is inserting a disclaimer in a manual legally binding?).

As it is, if Hikvision makes another colossal mistake (e.g., copying malicious code from a bulletin board like they did in 2015) or if they allow Chinese government backdoors in their cameras, Hikvision buyers take all the risk.

And while Hikvision's super low prices are attractive, one needs to seriously factor in these risks.

Hikvision Responds To Cracked Security Codes on Aug 15, 2017
Hikvision has responded to IPVM's report on Hikvision's security code being...
US Army Bans Chinese DJI Drones on Aug 08, 2017
The US Army has issued a ban on Chinese-made DJI drones. A US Army memo...
Hikvision USA Head of Cybersecurity Exits on Jul 18, 2017
Hikvision USA's Head of Cybersecurity has exited the company. In this note,...
Morten Tor Nielsen Defends Hikvision on Jun 12, 2017
Morten Tor Nielsen, veteran software developer for Prescienta working for...
Hikvision Backdoor Confirmed on May 08, 2017
The US Department of Homeland Security's Industrial Control Systems Cyber...
Genetec Expels Hikvision on Nov 08, 2016
Genetec has removed support for Hikvision devices, deeming them...
Dahua Distributor Angered "Always Give Good News About Hikvision" on Aug 11, 2016
A Dahua distributor is angry that "IPVM always give good news about HIKvision...
US Government Entities Hard Spec Hikvision on May 26, 2016
The US and Chinese governments are working together. Now, US government...
Comments (150) : Members only. Login. or Join.