This study provides the foundations for video surveillance professionals to understand the importance of cybersecurity, what is being done to enhance cybersecurity and what providers are viewed as the best and worst at cybersecurity.

They provided detailed color commentary on each point, so you can understand their mindset and approach.

The key trends revealed in the study:

Full details, integrator explanations and our analysis is shared inside.

Most customers rank cyber security of low importance in their decision making process. Nearly half of all responses indicated this: 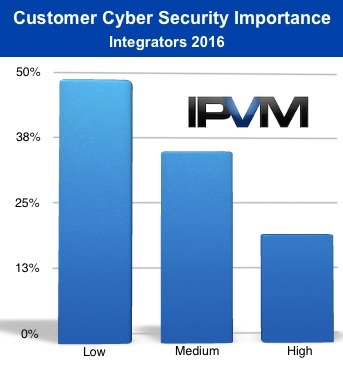 Customer indifference was often noted as the reason for low priority:

Large customers and those with regulatory requirements were most likely to have higher concerns around cyber security.

Banks, government entities, schools and healthcare organizations commonly have an IT department that is responsible for network security. These organizations have high awareness of risk, as comments indicated.

Changing default passwords was the most common step taken to enhance cyber security.

About 10% of responses indicated VPNs were used to enhance security.

Encryption in various forms is also used, though not as consistently as might be expected:

Keeping software and firmware updated, and deploying anti-virus software were listed, but not as frequently as the above steps.

Penetration tests, or regular outside testing/verification was not commonly mentioned.

Relying on the customers IT department to take responsibility for cyber security was also referenced:

This approach would not work for a small customer who has no IT department, but in the case of larger organizations it may be wise to allow the customer to decide how their physical security devices are going to be remotely accessed, secured, or connected to other networks.

Manufacturers Listed As Most Secure

Axis was by far the most cited, with nearly one third of responses:

Axis also has a hardening guide that provides recommendations for enhancing security for Axis products.

A few integrators disagreed about Axis, with one noting the risk of adding third party apps to Axis cameras and another commenting:

"Axis - because of their Windows only .NET platform for software (Axis Media Control plugin), reliance on Java for plugins (VMD3, etc), reliance on Windows only for certain functionality of cameras (anything audio related, AMC) and 100% Windows-only VMS (not that we would use their VMS). Also, they allow short passwords and allow brute force hacking attempts with unlimited password guesses."

Genetec makes a hardening guide available in their partner portal

For the least secure products, Hikvision was the predominantly mentioned brand, Dahua came up repeatedly, and several others mentioned "Chinese cameras" as insecure overall.

Hikvision does have a Security Center page on their website, with a link to report issues and a cyber security best practices video.

Hikvision Backdoor Confirmed on May 08, 2017
The US Department of Homeland Security's Industrial Control Systems Cyber...
Top Surprises in the Video Surveillance Industry 2016 on Nov 29, 2016
The top 3 surprises of 2016 for integrators surveyed by IPVM were: The...
Why Surveillance Pros Rationally Won't Care About The Massive Dahua Mirai Attack on Oct 05, 2016
The physical security industry has been fairly indifferent to cyber security...
Axis Critical Security Vulnerability on Jul 06, 2016
Axis has disclosed a 'critical security vulnerability' in most Axis products...
Hikvision Rejects Responsibility for Hacked Hikvision Cameras on May 10, 2016
After a massive number of Hikvision cameras were hacked, Hikvision has added...
Comments (3) : Members only. Login. or Join.