Hikvision has developed and is deploying minority analytics inside China, automatically identifying and categorizing individuals as ethnic minorities. While Hikvision has not marketed this, IPVM has verified this from information disclosed in the company's 'AI Cloud World Summit'.

In this note, we examine the technical approach, concerns about accuracy as well as abuse of minorities by the Chinese government-owned manufacturer's analytics.

Hikvision demonstrated their AI cloud system as part of a case study for the Mount Tai Tourist Area, with the system categorizing people as ethnic minorities (少数民族) or not, as shown in the example below: 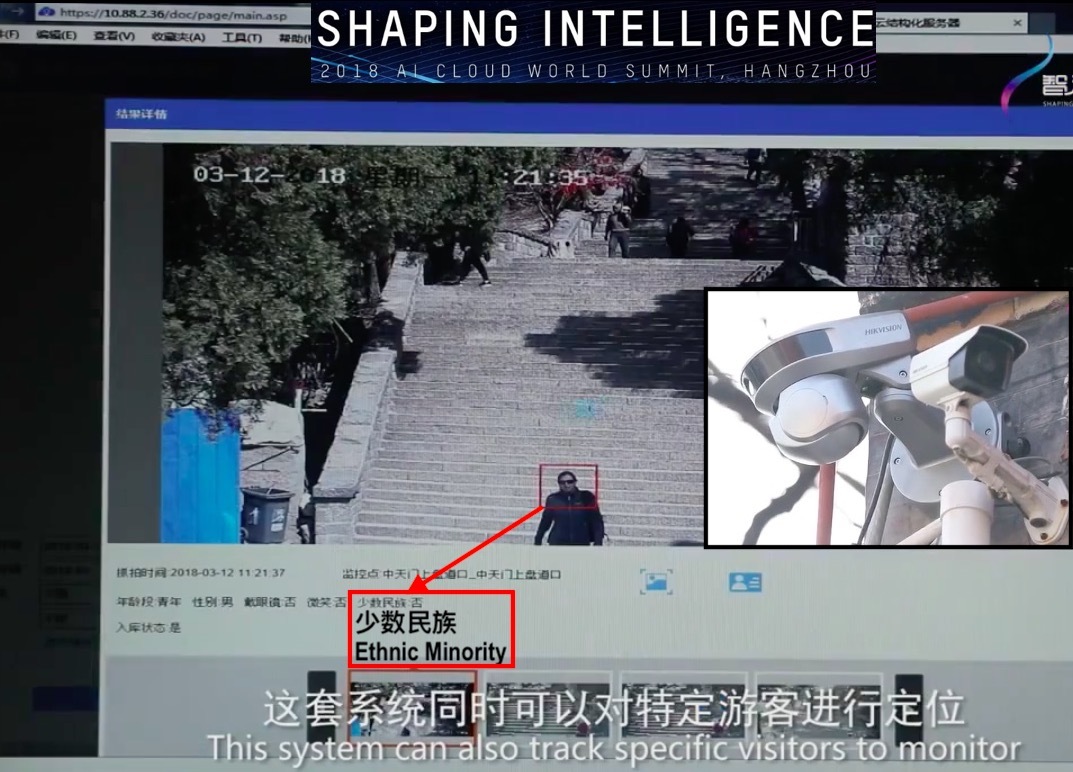 The categorization is a true or false (boolean) and does not attempt to categorize by a specific ethnic group. In the West, this would often be assumed to be white or black, but in the context of China, this is most likely Han Chinese or not.

Hikvision corporate acknowledged our questions on this topic but declined comment.

Update: Hikvision removed the video, attempting to cover up the claims after our report resulted in International news outlets picking up the story.

In the same case study, for the same person, the Hikvision system incorrectly identifies the person as not wearing glasses:

While Hikvision's DeepInMind performance problems are confirmed, it is still surprising that Hikvision's own marketing materials would showcase such an obvious error.

Additionally, the system categorized this person as a male but this is not clear:

Moreover, in that same case study, Hikvision showed which faces were being captured and analyzed, showing many heavily shadowed and captured at a harsh angle. 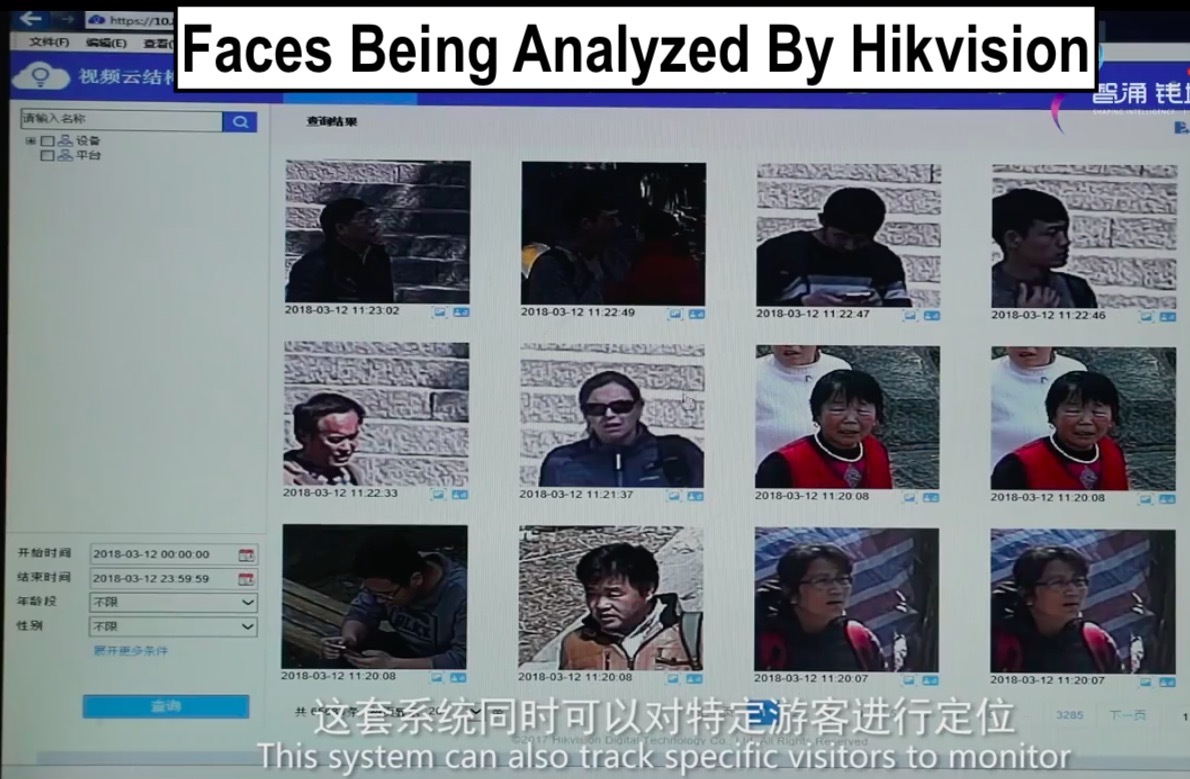 Despite that, they claim (as the text above shows) that they can track specific visitors, which is hard to believe when they cannot even correctly identify glasses on a person in their own marketing demo.

These examples from a video case study on Hikvision's website, excerpted in the clip below:

Minority/ethnicity analytics are certainly technically possible, though, of course, how accurate is one question. However, they are not widely promoted and, in the video surveillance space, Hikvision is the only manufacturer we have seen offering them. One outside the industry example is from a company named Kairos who is using this to celebrate diversity with online ethnic analysis, such as the example below: 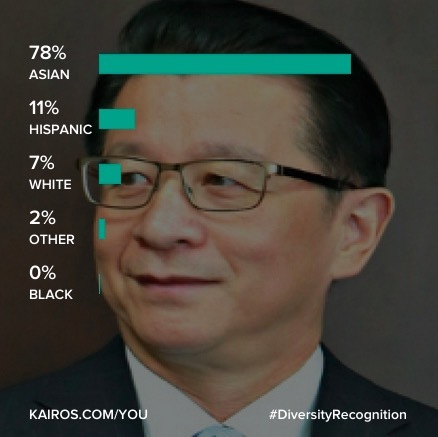 Probably the biggest reason that ethnicity analytics are avoided is the risk of using them to abuse minorities. Inside China, the most notable concern for such abuse are with the Uighurs, an ethnic minority in Xinjiang Province (recall this is where Dahua and Hikvision have recently won over $1 billion in projects) who the Chinese government has prioritized suppressing. And, as the Chinese government-owned and controlled video surveillance manufacturer, Hikvision is a key force in enforcing such tactics.

Hikvision Unlikely To Release In US or EU

Given Hikvision is aware of the significant privacy and political problems of using ethnicity analytics in the West, we doubt they will release this in the US or EU. However, Hikvision USA's VP of Sales touted ethnicity analytics last year in a US security conference so it is not out of the question.

Hikvision Global News Reports Directory on May 13, 2022
Hikvision has received the most global news reporting of any video...
Hikvision Admits Minority Recognition, Now Claims Canceled on Jul 23, 2020
For the first time, Hikvision has directly addressed its minority recognition...
Facial Recognition 101 on Mar 18, 2020
Facial recognition interest, use and fear is increasing. This guide aims to...
Hikvision Markets Uyghur Ethnicity Analytics, Now Covers Up on Nov 11, 2019
Hikvision has marketed an AI camera that automatically identifies Uyghurs, on...
"Automated Racism": Chinese Tech Companies Profiling Ethnic Minority on Apr 26, 2019
Scrutiny of Chinese facial recognition providers, including Hikvision, has...
9 UK MPs Call Out Hikvision Over Human Rights Violations on Mar 26, 2019
A group of nine MPs in the UK has released a letter calling out Hikvision for...
Massive Leak Of Chinese VMS Provider Exposes Xinjiang Surveillance on Feb 20, 2019
A subsidiary of China’s claimed largest VMS provider is tracking the precise...
PRC China Government Blocks IPVM on Oct 22, 2018
IPVM has been blocked by the PRC China government without any notice or...
Australia and French National TV Investigate Hikvision, Australia Military To Remove Hikvision Cameras on Sep 12, 2018
An Australian National TV investigation on Chinese video surveillance has put...
2018 Mid-Year Surveillance Industry Guide on Jun 28, 2018
2018 has been an explosive year for the video surveillance industry, with...
Hikvision Covers Up Racial Profiling And AI Error on Jun 25, 2018
Faced with global scrutiny, led by the US government-funded Voice of America...
The Hikvision Smart Classroom Behavior Management System on May 22, 2018
Hikvision's rapidly growing offering of analytics, which we most recently...
Comments (65) : Subscribers only. Login. or Join.