For large systems, with over 100 cameras, we identified the most preferred camera manufacturers selected from IPVM integrator survey results.

Here are the key patterns found, contrary to the SMB side: 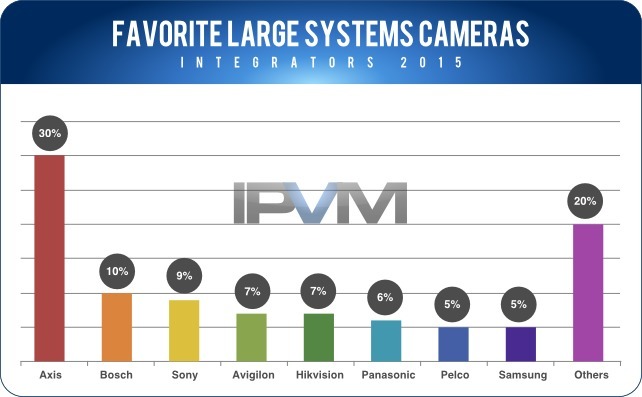 Unlike the SMB where the typical respondent only had a single manufacturer favorite, the majority of respondents for large systems offered multiple. Indeed, many integrators cited 3 favorites, such as:

We believe there are 2 main drivers for multiple choices:

On the SMB side, Hikvision and Dahua nearly had half the selections. By contrast, here on large systems, they barely had 10%.

Premium / legacy brands had 75%+ of the large system selections. Indeed, companies like Bosch and Pelco who are uncommon choices in the SMB market were among the most frequently chosen here on the large side.

Again, unlike the SMB side, where a few vendors dominated primarily based on price, for larger systems, 8 manufacturers received notable selection levels. Though Axis did well, it did not dominate, as 7 other rivals received substantial support. And those 7 had very similar integrator selection levels.

Unlike SMB where Hikvision was the top selection, for large systems, Hikvision was just in the middle of the pack. Few 'led' with Hikvision, as integrators most frequently mentioned them as one of 2 or 3 options they provided. However, a number of the selections indicated that Hikvision was moving up as an option for even large scale systems.

Even for Avigilon, almost all Avigilon dealers responding actually offered / favored other cameras along with Avigilon for large systems. For example:

This is unlike the SMB side, where Avigilon dealers tended to favor Avigilon only.

On the SMB side, Bosch did quite poorly, pointing to low adoption of their 'value line' Advantage offering.

However, on the large system side, Bosch did very well, right along with Sony and just behind Axis. Many integrators highlighted Bosch as one of their two or three favorite offerings, including specific mentions about their low light performance and low bandwidth consumption.

Not surprising to most in the industry, Axis was the most frequently selected. Comments included:

Looking at the competition here, only 2 of the next 8 competitors (Hikvision and Samsung) offer similar feature set products at significantly lower pricing. All the others tend to be in the same price range. Given Axis quality, track record, advanced feature sets, etc., it makes sense why they are so frequently selected.