Most video surveillance manufacturers are fighting to expand their sales to the small to medium size business market.

With the high-end saturated from early IP camera adopters, premium brands like Axis and Milestone see SMB as their main growth opportunity. At the same, Chinese manufacturers, such as Hikvision and Dahua, view SMB as an easy entry into Western markets.

With so much interest here, what are people actually choosing? We surveyed 90 integrators to determine what they are using and why for small to medium-size businesses, defined as single site deployments with under 20 cameras.

On the camera side, 5 manufacturers took 80% of the selections, with 3 from Asia, 1 from Europe and 1 from North America. The consensus for those 5 was quite strong, with only 20% citing other brands.

On the recorder side, 4 manufacturers took 51% of the selections, with 1 from Asia, 1 from Europe and 2 from North America. The consensus was quite weak, with more than 20 other manufacturers splitting the other 49%.

Low-cost camera manufacturers dominated the favorites, which just 3 of those companies - Hikvision, Dahua and Samsung taking 55% of the votes. This underscores how price sensitive the camera market is. All things considered, Axis did fairly well, squeezing in between the 3 manufacturers, coming in second place.

However, low-cost recorder manufacturers did relatively poorly, with more expensive / premium brands (like Exacq, Milestone, Avigilon, etc.) taking 3 of the 4 favorite spots. Only Hikvision placed in the top 4, largely driven by their big lead in camera sales and certainly helped by selling recorders for sub $500. Overall, though, these results, show that even in the price-sensitive SMB segment, far more differentiation still exists in recorders than cameras.

Only 4 recorder manufacturers had notable mentions, with the rest of votes spread across more than 20 other providers.

Here is the breakdown: 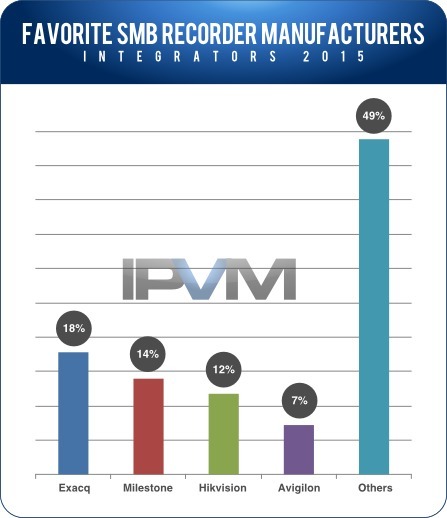 Here are the top 5 for favorite camera manufacturers: 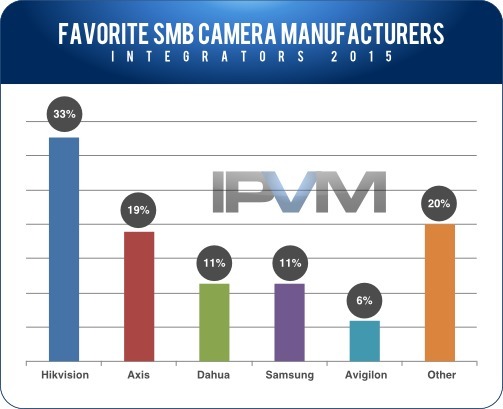 In the SMB category, Hikvision has a clear preference even over entrenched incumbents like Axis or dealer-only lines like Avigilon. Many comments noted that camera brand preference differs for larger projects, but for SMB business, the chinese giant delivers in a big way:

On the other hand, Axis high showing despite essentially ignoring the low end of the market.  Average Axis (median price of $770) prices range 60% to 85% higher than offerings from:

Despite this, the brand remains a solid recommendation for many resellers competing in the SMB space. Some commented they specify Axis in all jobs no matter the size:

However, many who cited Axis explained the brand is a better fit for larger projects driven by specifications or brand acceptance:

Dahua Cameras There But Trailing

What about the other Chinese giant? Well, Dahua still placed, but Hikvision and HD-TVI was mentioned nearly 3:1 more frequently than their IP or HD-CVI offerings. Indeed, no North American based responses cited Dahua as the 'only' offering in the SMB space, drawing focus on the dismal weakness of the brand's channel in several markets.

The majority cited their recommendations change based on the overall size of project. The second half of our question asked "Would [your under 20 camera recommendations] differ from bigger projects? How?"

As noted above, the most common 'large project' brand was Axis, but many other premium lines were frequently cited. In general, after Axis, there was no clear premium brand preference:

Many will downsell into analog if it fits the budget:

Again, here is the breakdown for favorite SMB recorders: 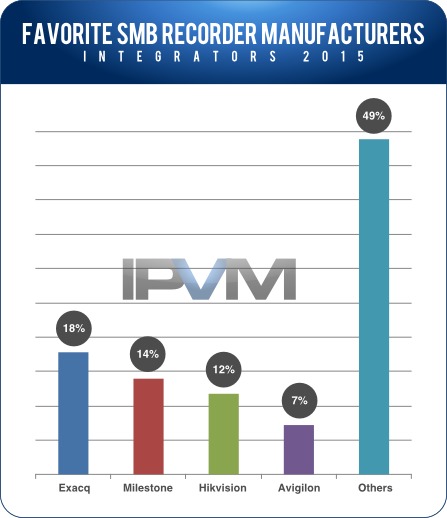 Similar to the overall Favorite VMS standings, Exacq continues to have notable support:

And Milestone was close behind:

However, Milestone was commonly mentioned as one of several options integrators would offer, in contrast with Exacq that tended to be the 'single answer' regardless of project size.  Note the contrast in the responses below:

Compared to Exacq, Milestone and Avigilon, Hikvision's recorder is nowhere close in terms of capabilities or user interface but Hikvision has two huge advantages: their strong camera positioning and their far lower price point relative to those VMS providers.

While VMS software flexibility is especially appealing to larger projects, in the SMB market, many integrators called out the use of appliances / NVRs as being important:

One notable trend was a sizeable minority listing multiple recorder offerings, further showing a lack of conensus on the recorder side. For example:

Avigilon was the only manufacturer to show up on both sides (cameras and recorders), helped by their strongly loyal channel:

However, some Avigilon dealers chose to break ranks for SMB project.  While they may lead with ACC, many mentioned they have alternatives at the ready if pricing or end user preference leads elsewhere: