"But what happens if someone steals my recorder?"

Anyone who has done more than a handful of jobs has probably heard this question several times. Though customers often fear a stolen recorder, statistics show it is not a significant problem.

150 integrators shared insight on how they prevent theft of recorders, the vertical they seen as most at risk for this issue, and some first-hand examples of when it has happened to their customers.

Recorder theft is not a big concern among integrators, only a very small percentage (7%) saw recorder theft as a high concern: 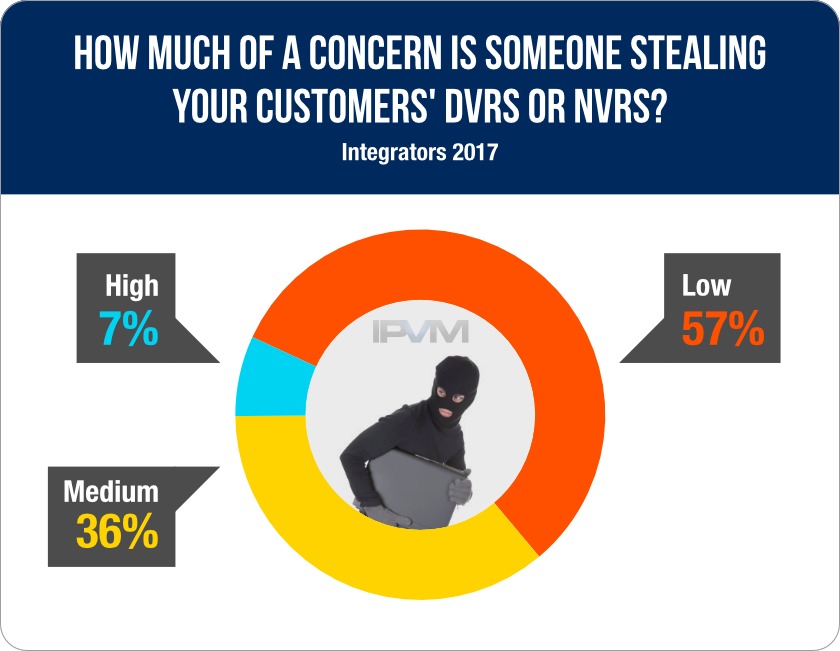 I get asked as a manufacturer once in awhile and usually followed by "Can we send the cameras to the cloud" which is usually not feasible based on bandwidth and monthly cost.

Some recorders allow you to use them as a backup device, recording all or any selected cameras as needed.  Very little storage needed to handle just a couple of days.

Just hang that recorder in a locked room and connect to the network.  Add a couple of minutes of configuration using the client software and it's done.

While I agree putting the whole system on the cloud can be out of the question, I think a well placed cloud based camera or two can add a great layer of security as well.

I think a well placed cloud based camera or two can add a great layer of security as well.

Well, he did mention "cloud-based" so... He'll get some footage?

Great and informative article! You always hear about it but it does seem limited to certain niches. However, I would think those small retail stores might eventually start going to cloud based or maybe hybrid solutions as Internet service starts getting cheaper. If it's managed correctly, with only specific cameras sending motion images up to the cloud at a rate of maybe 1FPS to 3FPS maybe at most, it could be manageable and done inexpensively as possible. You don't need to retain a lot of video in the cloud as anything serious that happens is known immediately, and most times a picture or few is all that is needed.

Given how cheap/small wifi components and USB drives are, it seems like you could create an on-site wifi backup, where a recorder has a local drive, but also sends data realtime to a near-by, but easily hidden, wifi receiver with a 64GB USB drive.

and I wounder why ?

when you have so much to loose and depend on the results of the recording.

why would you cheapen out and install systems like a loose wire install or a nvr hanging on a shelf in the main entry where all can see.

install where there is no security and everyone has access

just another Feel Good security System for jokes and riddles.

you have to wonder if they really want security or just feel good that they have something in place.

Never had a unit stolen , but seen many that were so easy to remove it would just be a matter of time.

It always seems to come down to money. A balance is struck between what is the least amount of money possible the customer is willing to pay vs what the installer wants to put their name on. And small retail like convenience stores are notoriously the cheapest of the cheap.

Sometimes the installer gets tired of being nickel and dime'd so much they're like "Yeah, ok, I'll install the system for that price, but I'm not going to tie up the wires nice and pretty for you. If you want them to look nice, then you can go up there later and tie them up yourself."

Sometimes the customer sees the quote and thinks, "I'll just demand for another $50 off. I know this installer won't walk away over $50 when I'm paying him a $1000. He won't let that hour he's spent here go to waste over just $50. Every little bit I can get off is less money I have to pay." Then the installer says to himself "Ok, you want to nickle and dime me down for $50 measly bucks more. That's fine, I just won't install that lock box for the DVR I normally include."

I'm not saying it's right in that situation if the installer allows a low balling customer to dictate the quality of their work. But when you're trying to make ends meet, what are your choices when there are hundreds of installers willing to do the same thing for less?

Maybe that wasn't what you were talking about, but that was my impression of what the subject was.

Yes , but these are name brand chains with lots of locations

and when you go by in drive thru , it looks like the owner put them in himself from a ladder he could reach .

or in the planning process someone changed from one brand to another and installed box's and conduit to get where they would really work.

So who's in charge , the professional or the newby on the job who just wants more business.

these are more and more common.stores like taco bell, chick fa la, KFC , McD. s  and many more i see as i drive thru.

would no put my name on those installs

I had to fix, repair, reinstall a national accounts project I bid on a year earlier , and risk management called out how bad it was installed , so I got to reinstall most of the system as the cheep installer thought it was past and stick , so he just did the whole job that way.

no thought for what happen s later .

Is this the new norm ? or is there any professionalism left in this industry.

Christopher, I hear what you are saying, but just because it is a chain does not mean it is making more money. Fast Food and convenience stores are on very thin margins regardless if they are privately owned or a franchise chain. You can't look at Taco Bell as a whole, you have to look at each Taco Bell individually and how much of a profit margin is that location making. I agree standards should not fall so low, but they do in those markets.

Prominently placed and easily accessible dummy DVR's with break-away cabling can reduce tension with criminals during an incident, and let them depart quicker, happier and guiltier... 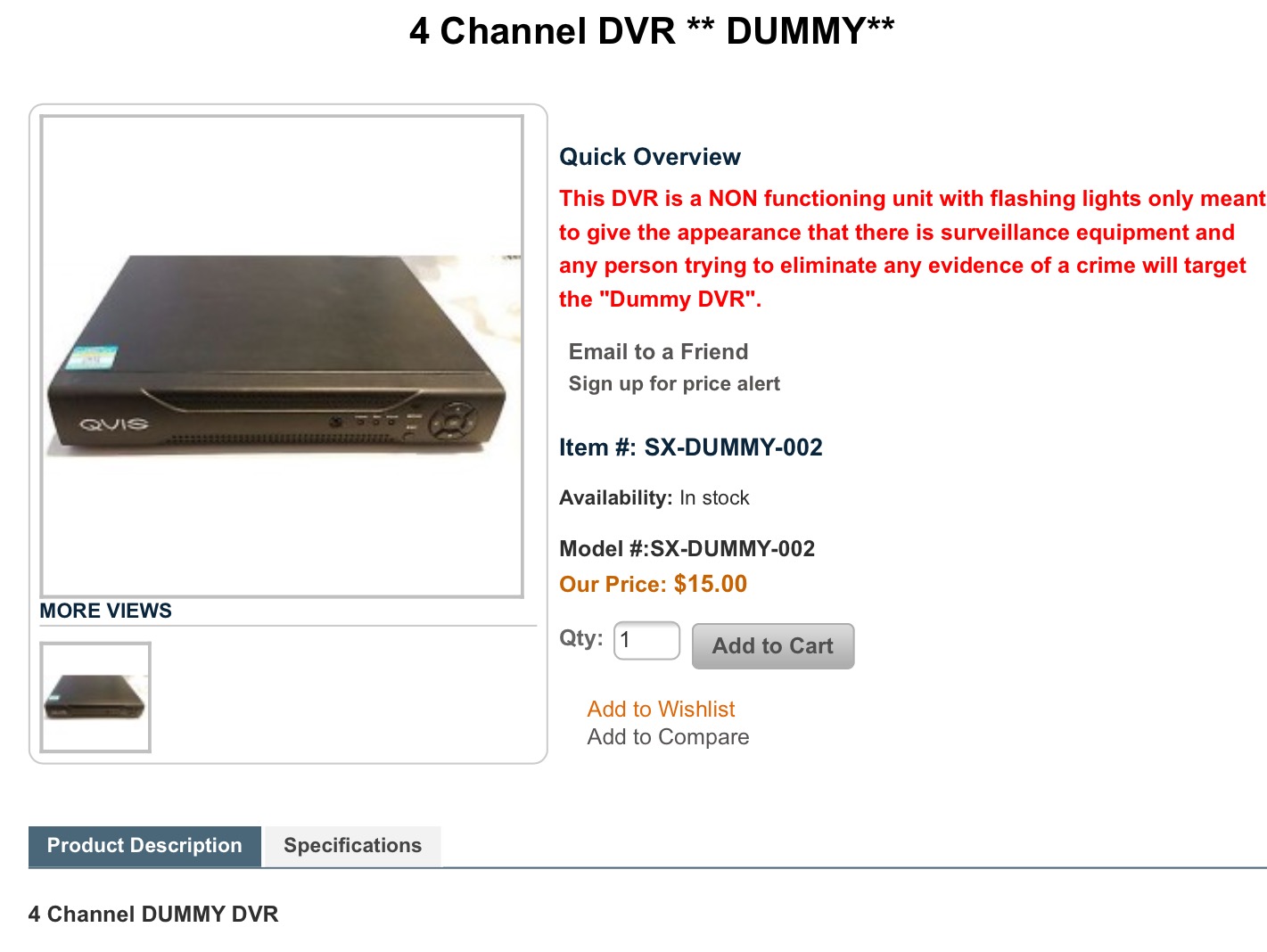 Related: What The? A Dummy DVR?

1st Hikvision job I ever did, we set up PC-NVR on a laptop with mapped drives that pointed to a Synology that was in a hidden vault. This was in addition to the primary NVR's.

It used to be a huge issue, as tech has changed it seems nobody asks for "the VHS security tape" anymore

...as tech has changed it seems nobody asks for "the VHS security tape" anymore...

Robber: Ok, give me the security tape, now!

Clerk: Sorry old-timer, but they don't do it like that anymore, everything is stored offsite, "in the cloud".

Someone robbing a convenience store, I think you are more likely to hear the Robber say something like, "So does that mean that Earl [url] guy has it?"

It's great to see this site talking about DVRs.