The wide format can be very useful in many surveillance scenarios but some of them fit poorly.

The most commonly cited problem are hallways which are tall and narrow, fitting poorly in widescreen as shown below: 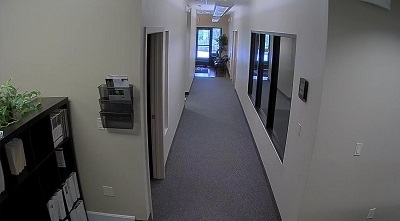 In this report, we tested corridor mode in a number of scenarios, starting with hallways.

We also tested vehicle entrances / license plate capture like so: 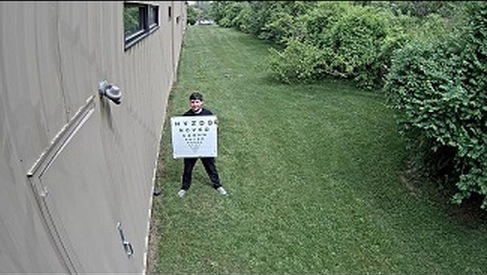 In the past, corridor mode availability was limited, but with more manufacturers including such image rotation in their cameras, IPVM has a comprehensive report covering the below questions:

Corridor mode enables one of two things, potentially useful in many scenes:

Switching to corridor mode but maintaining the same focal length allows users to capture more area in front of the camera (and beneath, depending on angle of view), eliminate unused blank wall space, and maintain similar PPF.

In the example below, we have highlighted wasted area in red on the 16:9 image, whereas the view gained is highlighted in green. Both fields of view deliver ~66 PPF at our subject. 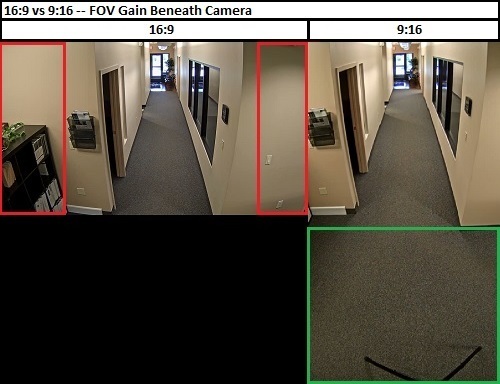 Given the taller corridor mode aspect ratio, zoom can be increased, eliminating unneeded areas of the FOV while increasing PPF on target. However, this negates the advantage of increased coverage area discussed above.

In this example, tightening the FOV effectively doubles the PPF on the subject, but wide coverage of the T-intersection is lost.

T-intersections, a common surveillance problem, benefit from a 3:4 aspect ratio as opposed to 9:16. Here, not only is the hallway covered, but 3:4 allows for more of the intersection to be covered, allowing for tracking of subject direction, while still providing a good view of the area beneath the camera. 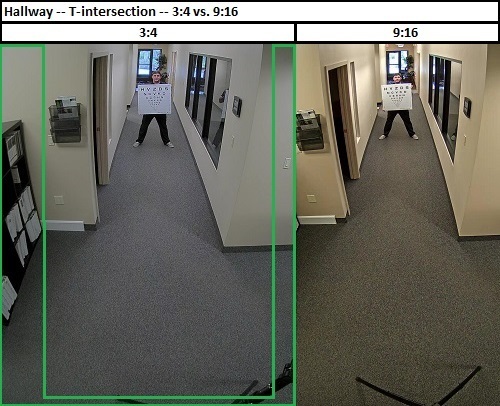 Finally, in especially long hallways, increasing zoom to increase PPF on target may be preferable to wider angle views showing direction, especially if other cameras are present in connecting areas. In the example below, narrowing the FOV more than doubles PPF on target.

Though not as commonly considered as indoor areas, outdoor areas also benefit from corridor mode.

For example, when viewing the building exterior shown below, trees and foliage not critical to viewing vandalism or break-ins are eliminated from the field of view, with the entire man door and area below the camera visible when using corridor mode. 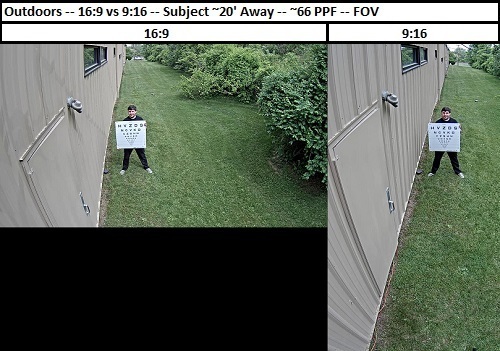 Both aspect ratios in this case deliver the same ~66 PPF on target. 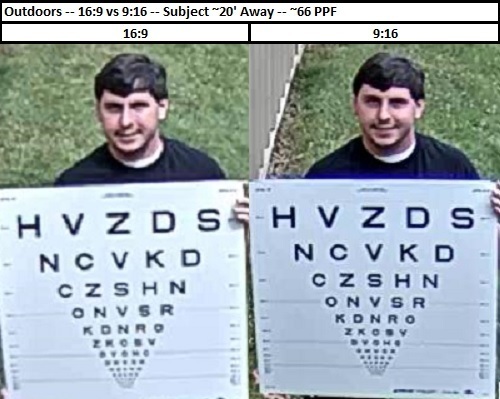 Users may download a compilations of clips from this scene, including both original and corridor mode videos.

Users wanting to watch our subject walk through the scene in different aspect ratios can click the following link to download a .zip folder(~22 MB) containing 16:9, 9:16, 4:3 and 3:4 videos.

If viewing a lane or lanes from directly above, or at very shallow angles (<5°), corridor mode provides a longer capture area than 16:9, seen below with the car pulling away from the camera. This is most useful in toll applications or when mounting cameras to parking deck structures or overpasses. Compare 16:9 vs 9:16 below:

However, in many road or street scenes, cameras must be mounted to the side of the capture area, increasing the angle of incidence. Even small increases in horizontal angle make 16:9 more usable than 9:16, as seen below, since vehicle move horizontally across the FOV.

In the past, corridor mode support was limited to only a few manufacturers. However, in 2017, nearly every major manufacturer supports this function on some or all of their cameras, including:

There are some holdouts which still do not offer the feature, such as Canon or Geovision, though these are by far the exception, not the rule.

We track which cameras support corridor mode in the  IPVM camera finder.

Avigilon cameras support corridor mode, but only in Avigilon's own Control Center VMS. There is no option to rotate images in the web interface and view them in other VMSes.

Axis's image rotation can be found under the Video Stream menu. Users may select 0°, 90°, 180°, 270°. Some cameras (such as the high end Q1615) also support an "auto" option, which rotates the camera's image based on its mounting position, as determined by an on board gyroscope.

Hikvision's image rotation is found under the Image menu in the web interface. Hikvision includes only an on/off control, with the image rotated 90° when turned on. 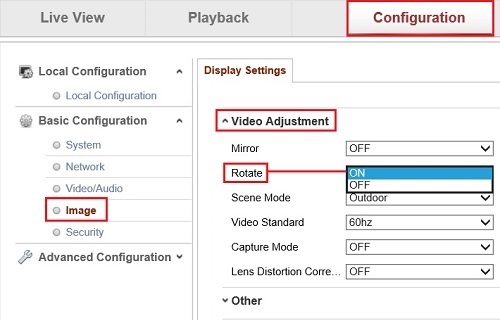 Hanwha's image rotation is under the Video & Audio menu. Here, users can choose between 0°, 90° and 270°. This is supported in all current Hanwha lines, including Wisenet Lite, P, Q, and X.

Sony's image rotation is found under the "Installation" tab, where users will see image rotate, and can rotate the image between 0°, 90°, and 270°. Note that changing rotation also defaults CODEC settings, in this case 30fps, 8Mbps CBR.

Now, we take a look at various VMSes and see if they allow for tall, vertical layouts and camera views to accommodate for the rotated aspect ratios, and see if it possible to rotate a cameras image through the VMS.

Avigilon's ACC VMS allows for custom views and can incorporate tall, vertical layouts that fits a rotated camera image, as seen below. 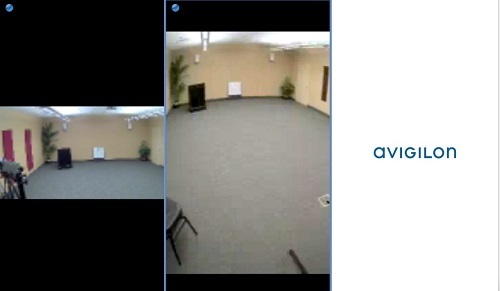 Camera rotation may be set in ACC setup for supported cameras, including Avigilon and Axis. Others which support the feature, such as Hikvision, Samsung, and Sony, do not allow rotation to be set via the VMS.

Exacqvision also allows for custom views that can be tall, vertical layouts, which is demonstrated below:

Image rotation may be configured through Exacq's camera setup page for some cameras, including Axis, Hikvision, and Sony, with controls found on the video tab. 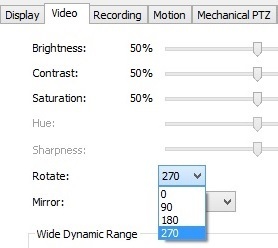 Genetec includes layouts that include tall, vertical view panes, as seen below. However, custom layouts are not supported, only pre-set options. 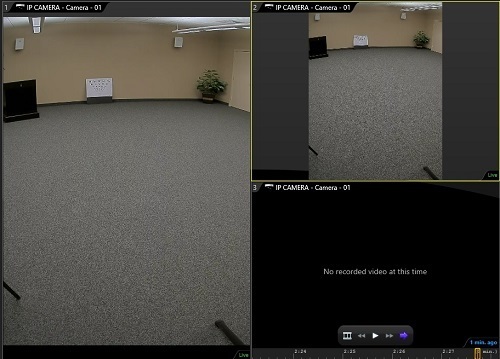 Image rotation may be set up in the "Hardware" tab of the camera, under "other parameters", but it is not available for all cameras (Sony and Hikvision, for example), and sometimes can only rotate images between 0° and 180°. 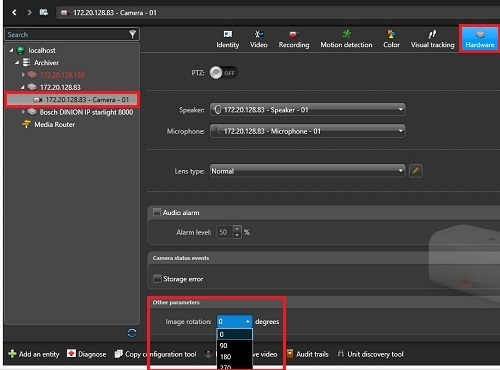