Hikvision admits their equipment got hacked in a large government deployment - stock down just 7.5%

Avigilon announces revenue up 42% - stock down 15%

If you are an Avigilon investor, you just cannot win over the last year.

In this note, we break down Avigilon's most recent financials including:

We estimate ~30% real growth rate for Q4, year over year, after factoring out (positive) currency exchange fluctuations and acquisitions. Unlike Axis, Avigilon refuses to disclose revenue in local currency terms or organically, choosing to obscure their true growth rate.

For the past few years, and especially in 2014, Avigilon benefited heavily from the CAD / USD exchange rate. The chart below shows the steady tailwinds benefiting Avigilon: 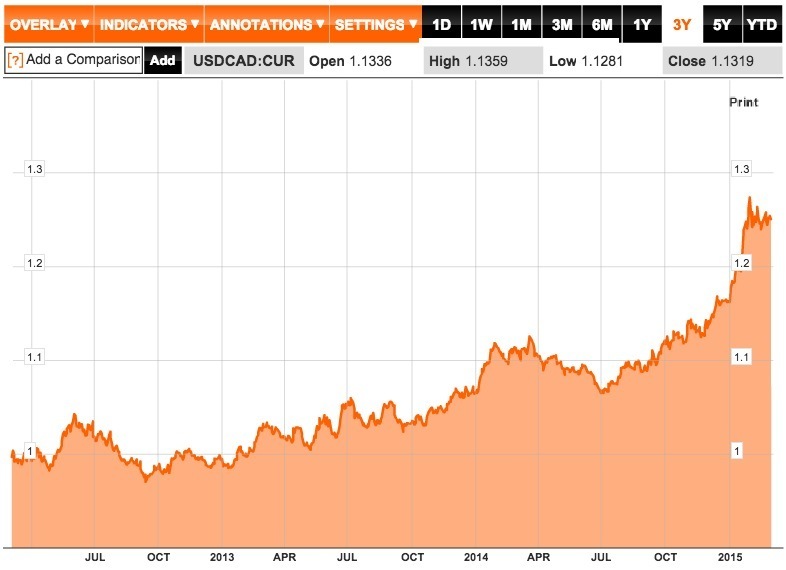 As this chart from Avigilon's report shows, they benefited across all 3 major currencies:

Secondarily, 2014 was the first year including the VideoIQ acquisition, which added ~$20 milion in revenue inorganically.

On the plus side, a real growth rate at or slightly above 30% is still quite good for the video surveillance industry, especially given the overall market declines being experienced. However, Avigilon's growth rate is still sharply down, by half or more, than what they were doing just a year prior.

Becoming a US Manufacturer

Avigilon is opening a 40,000 sqft US manufacturing facility that they expect to be fully operational in Q3 or Q4 2015. This will be, in addition, to their 60,000 sqft facility in Canada. Avigilon says combined these will provide $1 billion manufacturing capacity.

Avigilon's CEO saw the benefits of Canon's ownership of Milestone and offer to acquire Axis, observing that:

"By combining these two entities and presumably attempting to come up with an end-to-end offering, it’s now a contrary strategy to what those businesses were built on."

Of course, Canon denies this plan but many, including us, believe it is inevitable. Indeed, to Avigilon's CEO point, a move to a contrary position will be challenging to execute.

"And then there is inevitable scenario where key management and founders and key executives often get a big windfall and become perhaps less motivated to continue growing the business."

Prior to the financial announcement, Avigilon issued their acquisition report on OV's licensing businesses, revealing that OV made ~$18 million on licensing in the last 2.75 years, with 85% of that revenue coming from 4 (or fewer) manufacturers.

On the call, Avigilon tempered guidance, noting, "the expected revenue of the licensing is -- at least in this fiscal year is expected to be relatively modest." They emphasized that they do not want to "do custom deals with various licenses, but come to more of a standard template. And so what that should do is, it should get basically over time the revenue in a more consistent manner across all licenses."

Interestingly, Avigilon's CEO made it clear that revenue generation was not the primary purpose of those patents. Instead, he declared:

"The main objective behind the acquisition of the patent is to position ourselves to effectively dominate the global video surveillance market."

However, he did not clarify how they would use those patents to dominate. As we speculated previously, one powerful way is to attempt to block rivals in large deals by alerting end users that their competitors are, or at least might, be infringing on Avigilon's patents.

The long awaited new CFO has still not been hired.

Avigilon's stock challenges began 10 months ago when their CFO mysteriously quit the night before earnings were to be released. At that time, Avigilon's first CFO Wan Jung came back as 'interim CFO'. Though Avigilon did hire a VP of Finance [link no longer available] in July 2014, the interim CFO is still there 10 months later.

Avigilon commented, "As you know Wan is our CFO today and we have not yet identified a permanent candidate to takeover that position. The search does remain open."

The company is already more than half way there. They 'only' need to grow at a CAGR of 36% to get there.

(Indeed, it is even easier if you use Avigilon's other definition which is a $500 million annual run rate by Q4 2016).

Either way, Avigilon's growth has been tremendous. With their size already, they are one of the largest surveillance companies in the world and as powerful companies like Milestone and Axis get taken out, it provides even more opportunity for Avigilon.

The big challenge with be dealing with Avigilon's strategy shift. Now that the HD 'frontier is closing', and winning just on resolution is increasing hard, Avigilon will have to lean more on its overall solution and more specifically by differentiating on analytics.

It is still too early to tell how Avigilon will do with analytics and whether analytics can provide the same type of growth that HD did in their first decade.

Avigilon Fights Back Against Falling Share Price With Share Buyback on May 08, 2015
Avigilon's stock is down 50% from their peak price last year. The stock...
Comments (3) : Subscribers only. Login. or Join.