We criticize Knightscope regularly - their lack of revenue, their trying to fool mom 'n pop investors, their associating themselves with a clueless company, Jim Cramer's nonsense 'interview', etc., etc.

All this shows is how easy it is to defeat this robot? I would say this is a marketing fail?

All this shows is how easy it is to defeat this robot?

I agree that it shows how easy it is to defeat the robot but I don't think that is 'all'.

They still need to deliver a viable value proposition but having high name recognition helps the sales process. 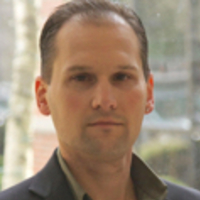 Their sales guys have an advantage as well.

What other company can offer you robotic protection AND investment portfolio diversity?

Even this incident is a non-incident if the robot itself wasn't involved.  Without the robot getting attacked there was no crime reported by the robot.  It is not as though the K5 has a breathalyzer.

Good point.  Knightscope had a negative impact on crime reduction, actually causing an incident from their robot being present.

Picturing this I was reminded of the "Citizen's Arrest!" scene from The Burbs:

I can see the Knightscope guys running out and tackling the drunk guy, protecting their poor robot.

Im my mind, the "robot assault" constitutes vandalism, like parking your Bugatti amongst a sea of domestic vehicles... you're pretty much ASKING for a break-in or a key down the side of your fender.  These things are so audacious in their appearance-- flashing lights, spooky Star Trek sounds, bulbous physique... I mean, I've been SOBER and thought about what it would be like to tackle one of these things. "Where do you suppose the center of gravity is?"  "Should I take it out at the head, or from the waist?"  "If I knock it down, will Dr. Smith from Lost in Space try to molest me when I'm bent over and my back is turned?"  These are questions I ask when I'm sober, so I don't think it's too far-fetched to assume someone would feel compelled to vandalize them while in an inebriated state.

These things are like a rolling Box camera.  Until someone comes up with a rolling vandal dome, I think we're just going to see more and more of this.

See what I did there?  Camera references.

I mean, I've been SOBER and thought about what it would be like to tackle one of these things. "Where do you suppose the center of gravity is?" "Should I take it out at the head, or from the waist?" "If I knock it down, will Dr. Smith from Lost in Space try to molest me when I'm bent over and my back is turned?" These are questions I ask when I'm sober

LOL, you scare me.

Knightscope supposedly "on patrol" in Knightscope parking lot right before attack*. K5 claims to have been on simulated smoking break, but actually looks more like an ambush: 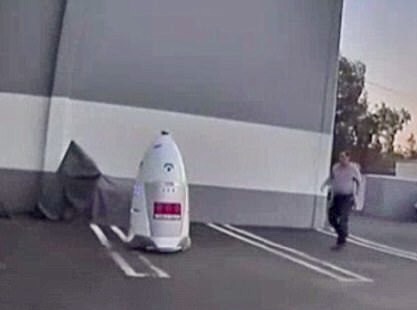 *Picture of confrontation is real, dialog adapted from here.

I find it mildly amusing that this thing parks itself out back next to the covered gas grill, which bears to question, should a Knightscope be on its smoking break next to a propane grill?  Moreover, is it 20' away or more from the nearest building egress?

If this article has taught me anything, it's that now we know if a Knightscope tips over, and no one's around to see it, it DOES make a sound.

If this is legitimate, the interesting thing is they needed another camera to verify the incident happened, not the K5 itself.

Missed this in the flyer:

"Works great if you have it on camera at all times!"

Knightscope, which makes the robot that was targeted in Mountain View, said it's had three bullying incidents since launching its first prototype robot three years ago.

Knightscope... said it's had three bullying incidents since launching...

I don't think these robots were "bullied". And I'm surprised to hear a robotics company even use such a fallicious Anthropomorphism.

Bullying without coercion is just aggression.  Were these robots coerced or intimidated?

Is it even possible to "bully" a robot? One could try:

Bully: Open the garage bay doors!
Robot: I'm sorry, I'm not authorized to do that, can I help you with anything else?
Bully: Is there an electrical outlet nearby?
Robot: Why yes, right behind you.  What do you want it for?
Bully: Just this Weller 80W soldering gun.
Robot: Opening garage bay doors.

Bill Santana Li, CEO of Knightscope, tells Business Insider there's a lesson to be learned from the events on April 19.

Yes, because if you mess with a K5, multiple human beings will be dispatched to intercept and detain the attacker.

Yes, because if you mess with a K5, multiple human beings will be dispatched to intercept and detain the attacker.

Unless you weigh less than 25 lbs, in which case the lessons learned from the events of July 7 will be applied as well.

“It hurt the (robot’s) ego ... but I would much rather someone be harassing a robot than a human being,” [Knightscope VP] Stephens said.

They should stop gratuitously ascribing human traits to their robot, especially when the absence of those traits is part of their competitive advantage over traditional guards.

Perhaps Knightscope will provide counseling to the other robots on staff who are now understandably fearful of being brutally up-ended.

SIA Director Dismisses Coronavirus, Don't Cancel ISC West on Mar 03, 2020
SIA Director and ISS executive Janet Fenner has come out criticizing the lack of education and the 'mainstream media', arguing against canceling...
Motorola / Avigilon Drops ISC West on Feb 26, 2020
Motorola Solutions has pulled out of ISC West 2020 effective immediately, because of coronavirus concerns, IPVM has learned. This is done amidst...
China Manufacturer Suffers Coronavirus Scare on Feb 20, 2020
Uniview suffered a significant health scare last week after one of its employees reported a fever and initially tested positive for coronavirus....
CANCELLED: IPVM Conference 2020 on Feb 13, 2020
CANCELLED, May 6th: We are canceling the IPVM September 2020 Conference and providing registrants with the choice of full refunds or equivalent...
IPVM Opens 12,000 Sqft Testing Facility on Dec 16, 2019
IPVM is proud to announce the opening of the world's first video surveillance testing facility that will allow us to significantly expand our...
Covert Elevator Face Recognition on Oct 24, 2019
Covert elevator facial recognition has the potential to solve the cost and complexity of elevator surveillance while engendering immense privacy...
How Cobalt Robotics May Disrupt Security on Sep 13, 2019
While security robots have largely become a joke over the last few years, one organization, Cobalt Robotics, has raised $50+ million from top US...
Kidnapping Victim Rescued With Video From Ring Doorbell Camera on May 24, 2019
A kidnapping victim was rescued within 24 hours, with the police crediting video from a Ring Doorbell camera as key to solving the case. A girl was...
Bastille Cell Phone Tracking Profile on Apr 30, 2019
Is tracking someone by their cellphone the next generation of surveillance? Bastille is a US startup which tracks people by their cellphone or...
Verkada Wins $783,000 Memphis Deal on Apr 29, 2019
The US city, most famous in video surveillance for standardizing on Hikvision, has issued an RFQ for 962 Verkada cameras due Wednesday, May 1,...

Wyze Raises $10 Million And Seeks Services Expansion on May 27, 2020
Wyze has raised $10 million, the company's first disclosed raise since the $20 million announced at the beginning of 2019. Inside this note,...
Startup Videoloft Presents Cloud Storage on May 27, 2020
Videoloft presented offsite cloud storage at the May 2020 IPVM Startups show. A 30-minute video from Videoloft including IPVM...
Directory of 250+ Fever Camera News Reports Globally on May 27, 2020
This global directory tracks 250+ articles about thermal cameras used to detect fevers in response to the coronavirus pandemic. Articles are...
Integrators Rising Against Coronavirus on May 27, 2020
IPVM integrator statistics make it clear - Coronavirus's impact on business is lessening and many are anticipating even better news in weeks...
Netposa Stock Surges 46% After US Human Rights Abuse Sanctions on May 27, 2020
Last Friday, the US government announced it would sanction PRC video management provider NetPosa for being "complicit in human rights violations...
LILIN Presents NDAA-Compliant P2 Cameras on May 26, 2020
Merit LILIN presented its NDAA-compliant P2 camera series at the April 2020 IPVM New Products show. Inside this report: A 30-minute video...
ZKTeco Body Temperature and Mask Detection Reader Tested on May 26, 2020
While dedicated fever cameras emerged first, now tablet/kiosk fever detectors are ramping up. China's ZKTeco has been aggressively promoting such...
IDIS Presents 12MP IR Panoramic Fisheye on May 26, 2020
IDIS presented its 12MP IR panoramic fisheye camera at the April 2020 IPVM New Products show. Inside this report: A 30-minute video from...
FDA Defines Correct Operation of "Fever Cameras" on May 26, 2020
The US FDA has now defined the correct operation of "Thermal Imaging Systems", colloquially known as "fever cameras". Many in video...
OnSSI Founders Return, Start Corsight on May 25, 2020
The OnSSI founders are back, less than 2 years after selling OnSSI to Qognify, they have returned to Corsight, a spin-out of an Israeli AI...