Want to add biometrics but avoid spending nearly $1,000 per door for it?

When it comes to fingerprint readers, there are lots of options that all claim to perform the same. However, the ZKTeco F7 Fingerprint Reader [link no longer available] is the least expensive Wiegand/Fingerprint Reader on Amazon, available for ~$80 from several sellers, and generally less than $120 from any of them.

While this unit is commonly rebranded as an OEM and is resold under countless model numbers, it is far less expensive that premium brand offerings.

[Note: this is our first test in a series on fingerprint readers, which will also include tests on BioScrypt, Morpho and Superma this summer.]

Below is the first of 4 videos inside this report that show our test findings:

The key findings of our test include:

We examine each of these aspects in the sections that follow.

Here are the feature claims or characteristics we found most important:

Overall, especially for a budget price reader, the mix of options and build quality of components is good. The housing is well molded and all components feel 'quality' with bright display, firm tactile button keypad, and steel mounting bracket.

Watch the video below where we highlight the problems with knowing how exactly to use the unit due to lack of prompts or instructions:

In summary, without explicit instructions displayed like 'Enter Code' or 'Place Finger on Sensor', unfamiliar users may find themselves unable to correctly use the device to open doors. While the unit supports both '1:1' and '1:N' type scanning, which option is configured is not clear on the reader's LCD and only placing your finger on the sensor may be pointless in opening the door even if valid in the system.

While the unit claims to work in either 'Standalone' OR '3rd Party' modes, we found it usable only when it worked with its own controller.

When door strikes and position switches were directly attached to the unit, they unlocked/relocked reliably. Even advanced features like 'antipassback' are supported in standalone mode, and the unit did not fail to perform in this configuration.

However, when paired with the Axis A1001, the reader did not work as advertised.  While the wiegand interface indeed showed live data was being pushed from the reader to controller, that data was not formatted correctly as defined by the manuals, or the physical wiring needed to differ from how it was described in the installation guide.

A problem not addressed by any documentation was that wiegand values appeared to change with each read, even when the same finger is used. This screenshot illustrates examples: 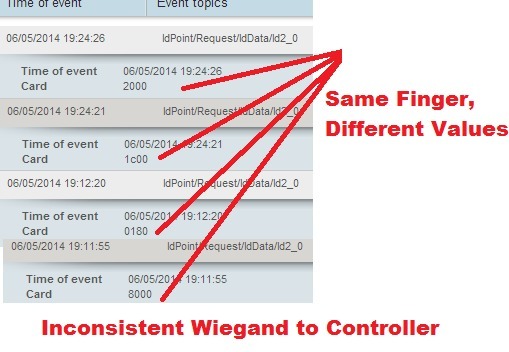 This most likely is a misconfiguration issue, but with no clear root cause and no clear tech support escalation path, this would be a big problem in the field.

Finally, both the orientation and language of the configuration application was difficult to understand. This video offers examples of how the unit is configured by the software client:

All configuration must be done either via this client, or by navigating menu options on the unit's keypad. There is no 'web server' GUI for onboard configuration changes.

All instructions and client were furnished with the unit on a CD, and while the disk is full of hundred of files, only very few actually pertain to the F7 model, with the rest being relevant to other units. There are four different client applications, and the only sure way of knowing which version to use with the F7 is to compare screenshots in the installation guide with the client being referenced.

While this unit is indeed inexpensive, significant cost will be spent trying to get it working with most access systems. We do not recommend using it with 3rd party controllers.

The unit may be useful for controlling a token door, but with the kludgy management software and a steep learning curve to become familiar, even single-door options compatible with Edge Solo controllers may prove less frustrating to work with.

We will continue testing fingerprint readers, culminating in a 'Biometric Shootout' report later this year. We will test mainstream offerings from Morpho, Supreme, and HID to compare against this unit.

Fake Fingerprints - Liveness Detection Solutions on Jan 27, 2022
Biometrics are not impossible to steal or fake, so many access control...
ZKTeco/ZKAccess Company Profile and Higher Margin Guarantee Examined on Aug 30, 2016
A budget access manufacturer has entered the North American market, but it is...
Fake Fingerprints - Liveness Detection Solutions on Oct 19, 2015
One of the biggest concerns with fingerprint readers is how easy they can be...
Testing Bioscrypt's V-Flex Fingerprint Reader on Jul 25, 2014
With fingerprint readers available for as little as $100, why would you pay...
Comments (6) : Subscribers only. Login. or Join.