Now, they are back with their second generation offering. In addition to higher resolution (1080p vs 720p), the camera focused on intelligent video / analytics, such as:

We bought one and tested it against Google Nest Cam and Yi's first generation camera: 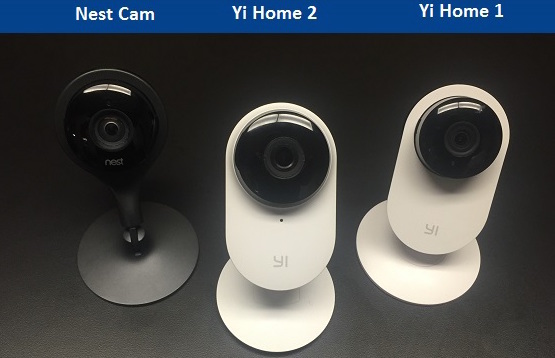 The Yi Home 2 offered performance similar to or better than the Nest Cam for ~$70 less and no recurring charges. In our tests, it experienced fewer false activations from shadows, lights, cars, and other sources, though users should be careful to adjust sensitivity to avoid missed detections in low light.

Finally, note that features such as "Baby Crying Detection" and people counting, while included in Xiaomi's marketing material, are not yet included in the app.

Xiaomi do not have telephone or live chat support. The only contact methods are social media and a contact form on their website. Our inquiries via their web form went unanswered.

The camera is similar in size and design to the Nest Cam and the Yi Home 720p camera. The design of the Yi Home 2 has been changed from the first generation, with an all-in-one cube type design instead of the "puck" type camera which snaps into the mount (seen in the Yi Home and Nest Cam/Dropcam). 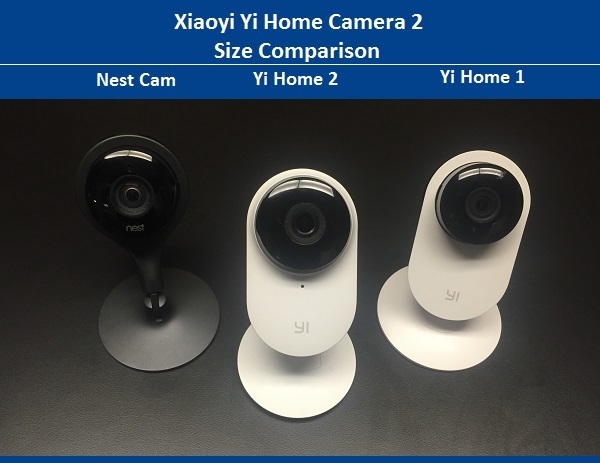 The video below provides a physical overview of the Yi Home 2 camera.

The image below shows the field of view in our conference room used during testing. 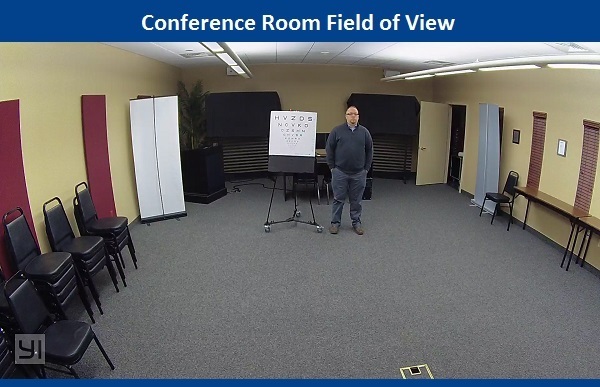 The Yi Home 2 outperformed the more expensive Nest cam in full light scenes. The picture taken from Yi Home 2 video below shows more details in the subjects face as well as the logMAR chart. 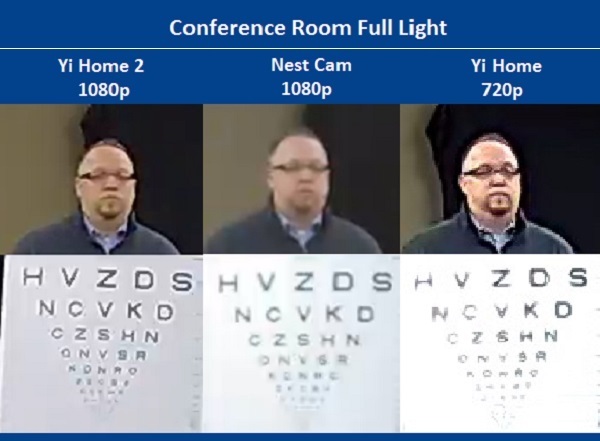 While it performed well in full light scenes, the details delivered by the Yi Home 2 were worse than the first generation Yi Home camera. The Nest Cam was less noisy than the Yi Home 2, though dark, not providing any more usable details. 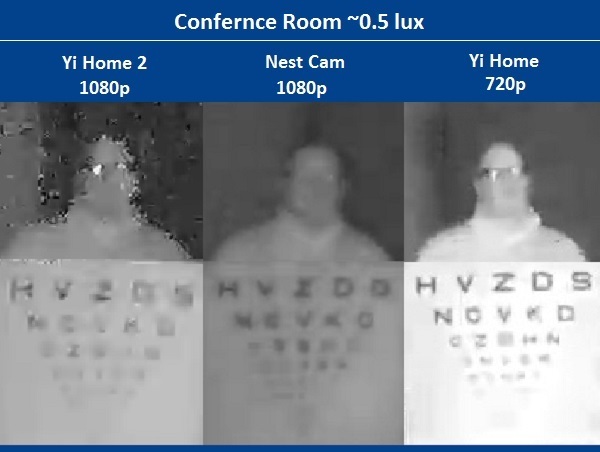 The Yi 2 includes human detection analytics, intended to trigger only when a human is in the scene, ignoring other motion. In our tests, these analytics worked well in full light scenes, with very few incidences of non-human objects detected as human (discussed below).

Over the course of three days of testing the camera falsely alerted for Human Detection on three separate occasions. First, it identified a 95lb dog as human, see below:

Next, in low light, we experienced two human detection alerts with nothing in the scene, only light level changes, seen below:

With Human Detection enabled, the Yi Home 2 rejected nuisance alerts which triggered both the first generation Yi as well as the Nest Cam with Nest Aware (which includes Nest's cloud motion algorithms). For example, in the scene below (a residential sunroom with a street in the background), passing vehicles triggered did not trigger the Yi 2 with Human Detection enabled, but caused alerts in the Nest Cam and Yi 1.

Both these cameras also triggered on bushes blowing in the wind outside, while the Yi Home 2 did not:

The Yi Home 2 uses 940nm IR, which is invisible to humans, unlike most integrated IR cameras which use 850nm LEDs, emitting the red glow most associate with IR. This allows it to be less conspicuous in low light, so intruders may have difficulty spotting the camera. Additionally, the invisible IR makes it more suitable for use as a baby monitor compared to the red glow of most cameras.

This photo shows the LED layout, which looks purplish to the camera (which has an IR cut filter though still lets some wavelengths through). Note that the brighter blue LED is the camera's status light (which can be turned off). 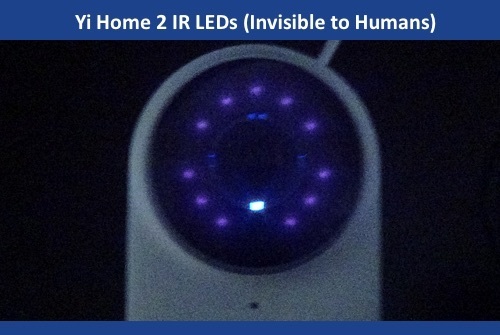 They Yi supports a gesture analytic used to initiate video recording, which sends a "Greeting Video Message", which is sent to other users of the camera. To initiate recording, the user faces the camera, raises their hand with palm forward, then closes their fist. We demonstrate this in the video below:

Gesture Detection worked reliably in our tests, triggering properly when users performed these gestures. However, in some rare cases, we inadvertently triggered recording when conversing in front of the camera, activating the feature with regular hand motion, not the specific gesture required. This may be a problem in some homes or businesses, depending on mounting location and activity in the camera's FOV.

Directory of 70+ VSaaS / Cloud Video Surveillance Providers on May 17, 2021
This directory provides a list of VSaaS / cloud video surveillance providers...
IR Surveillance Camera Guide on Feb 06, 2020
Integrated infrared (IR) cameras are everywhere in 2022, but not all IR is...
Directory Of Consumer Security Cameras on Aug 16, 2017
The consumer camera segment continues to grow, with new startups and models...
Samsung SmartCam A1 Totally Wireless System on Jun 06, 2017
Hanwha is keeping the Samsung brand alive in consumer cameras with the...
Hikvision EZVIZ Amazon Scam Revealed on Apr 26, 2017
Hikvision is violating US Federal Trade Commission guidelines and Amazon...
Yi Smart Dashcam Tested on Mar 31, 2017
Mega Chinese manufacturer Yi Technology is following up on its Yi 2...
Invisible IR Camera Tested (Vivotek) on Jan 30, 2017
Integrated IR is everywhere in surveillance, from high-end long range cameras...
Americans Vastly Underestimate Being Recorded on CCTV on May 24, 2016
Americans vastly underestimate how often they are recorded on CCTV, by a...
Comments (8) : Subscribers only. Login. or Join.