We asked integrators the following question:

We left it open ended so that integrators could propose whatever they liked and not be constrained to a predefined or preferred list. We also gave them space to explain their choices.

Reliability was issue #1 across the board for integrators. Cameras dead on arrival, field failures and flaky firmware were the most common and strongest complaints raised. What makes this so challenging is that there is no easy way to figure out reliability in the surveillance industry. Mean Time Between Failure statistics are non-existent in the surveillance industry and manufacturers guard failure rates more secretly than Fort Knox. Integrators are left to vague marketing claims and trial and error to figure out what works and does not.

The responses from integrators in our survey around the world should clearly help shed light on this.

Arecont Vision - The Worst By a Massive Margin

While 18 manufacturers received a vote, only 2 of them showed sizable support. Arecont and ACTi combined for 50% of the integrator's worst experiences with the remaining 16 manufacturers fairly evenly split the other 50%.

In terms of being the 'worst' though, it really was no contest as Arecont had nearly 3x the number of negative reviews as ACTi, plus ACTi had far more recommendations as an IP camera favorite than Arecont. The table below illustrates the key findings: 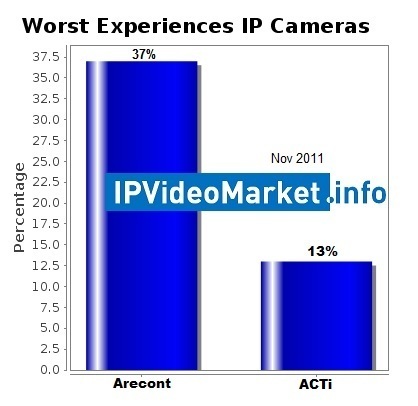 Beyond these two companies, many manufacturers had 1 or 2 negative reviews but no clear trend developed about significant quality or reliability concerns. The only other notable element was integrator disenchantment with Axis's margins / distribution policies - a point which we noted in the IP camera favorites report.

Let's first start with product quality. The list enumerates numerous failures, issues, bugs and quality problems integrators have faced. This is a long list but worth reviewing point by point to see how common and frequent these problems have been:

Arecont regularly dismisses quality problems as things of the past. They seemingly do this every year. For example, they did this last year in our 'Arecont's QA and Reliability Concerns' report. Nonetheless, integrators continue to report problems in our survey and in an interesting example a CCTV Forum discussion aptly named "Arecont FAIL" that continues to build over the last year.

We continue to uncover problems in their new cameras. We are in the middle of testing their newly released 20MP panoramic camera and have hit issue after issue to the point Exacq has temporarily pulled the model from their supported products list (see our Arecont 20MP discussion for more [link no longer available]).

Complementing poor product quality are repeated integrator concerns about the commitment and interest of Arecont Vision to address problems. Here is relevant integrator feedback on this point:

If you look at the reasons why integrators choose Axis to be their favorite, for the exact opposite reasons integrators are calling out Arecont as the worst.

All this said, Arecont clearly has impressive strengths and great potential. Indeed, if they did not, it would be impossible to understand why so many integrators would be going through such pains to try to use them. Important Arecont differnetiators include:

Plus, Arecont has real hardware engineering expertise and does not simply stick their label on the latest TI reference design.

However, Arecont has an achilles heal. They are clearly not demonstrating the same level of dedication to quality control and quality products as their more mature competitors. The failures, the bugs and the arrogance are just the beginning. Their image quality in WDR scenes clearly lags and their night bandwidth consumption is alarmingly high. While Arecont releases products at an amazingly fast rate, the level and likelihood of problems encountered is painful.

Obviously, be careful about using Arecont Vision products. We selected them as a risky choice in our IP Camera Buyer's Guide and the strong negative reviews from integrators clearly validates the risk involved. Minimally, you should stay away for a good 6 months from when Arecont first starts shipping a new product. Over and over again our tests on their new products show that what they consider to be 'production' has many obvious issues that have not been fully vetted. Furthermore, if you are buying in any serious quantities, you would be wise to push for advanced replacement of failures.

Lastly, here are the reviews of ACTi. They are fairly straight forward and center around poor product quality:

This is offset by ACTi's frequent selection by integrators as a preferred camera of choice for cost conscious buyer's. That noted, saving money on product cost that is offset by increased labor cost and customer dissatisfaction can be very problematic. Like Arecont, be careful about purchasing from ACTi and addressing these problems with them.

Worst Products on Sep 23, 2022
Security integrators periodically report on their favorite and worst products...
Worst Camera Manufacturers 2022 on Jan 24, 2022
Which camera manufacturer have integrators had the worst experience with in...
Damaging A Company's Brand, While Growing Sales on Sep 17, 2021
While both sales and brand are important to businesses, often companies...
Don't Deceive. Lessons From Scott Schafer on Mar 20, 2020
Deception is bad. We can learn some important lessons from Scott Schafer, a...
"New" Arecont Fixes Failures "Without A Fight" on Jun 05, 2019
The "old" Arecont was infamous not only for its camera failures but for...
Stats: IP Camera Dead On Arrival (DOA) Decline, Near Zero on Jun 01, 2018
New IPVM integrator statistics show that IP camera DoA rates have declined...
Arecont Files Ch.11, Agrees To Sell To Turnaround Specialist on May 14, 2018
The long-anticipated sale of Arecont Vision is finally happening. After...
Arecont CEO And President Resign on Apr 18, 2018
This is good news for Arecont. Arecont's problems have been well known for...
Worst Camera Manufacturers 2018 on Feb 26, 2018
Who is the camera manufacturer integrators have had the worst experience...
Troubles At Arecont Vision on Oct 03, 2017
Arecont is facing big problems. But Arecont says the future is 'bright'. In...
Worst Camera Manufacturers 2016 on Jan 27, 2016
Can Arecont do it again? In 2011, integrators overwhelmingly...
IP Camera Failure Rates 2015 on May 05, 2015
This research answers: What percentage of IP cameras are dead on...
Arecont Monster Raise - $80 Million on Dec 01, 2014
In the biggest private surveillance industry fundraising event, Arecont...
Top Manufacturers Gaining and Losing Ground 2014 on Oct 27, 2014
IPVM survey results of 100 integrators show what manufacturers are gaining...
Worst Manufacturer Support 2014 on Jul 30, 2014
With the best manufacturer support selected, we now turn to the worse. The...
Top 12 Reports for 2011 on Dec 25, 2011
Here are our top 12 reports for 2011, starting with the state of the...
Top 5 Disruptive Surveillance Companies 2012 on Dec 15, 2011
What companies are driving changes in the video surveillance industry? What...
Comments : Subscribers only. Login. or Join.