Adding cameras to a VMS is the most basic admin task in any surveillance system. And, of course, it is one of the first. Worse, it can be one of the most frustrating if a camera cannot connect.

Which VMSes are better or worse at managing camera connections? In this report, we share the result of our study. 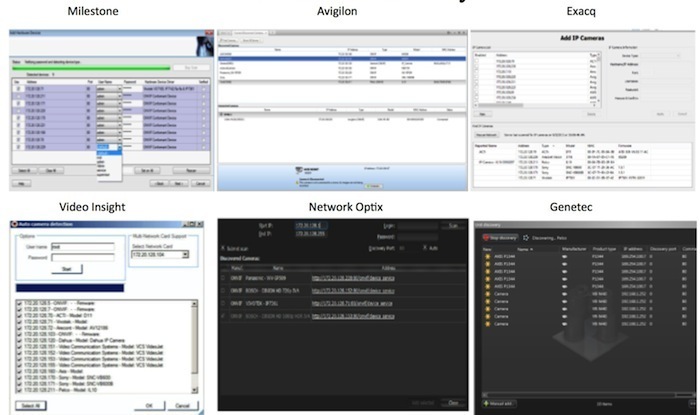 We identified 5 key differentiators for VMSes when connecting to cameras:

5 key differentiators were revealed in our tests:

Quickly adding cameras to a VMS means monitoring and recording can begin without wasting undue time in configuring, adding manually and troubleshooting.  All VMSes tested offered the ability to scan the network via auto discovery, however only two (Network Optix/Digital Watchdog and Avigilon) actually scan the network as soon as the tool was accessed without waiting for a user intervention.

Additionally, Network Optix/Digital Watchdog had not only started the discovery, but also added the cameras to the server tree enabling instant usability, whereas Avigilon required connecting the cameras and adding them individually. However, in NO/DW, should you not want those cameras added, you must remove them from the network, because removing them manually will only re-add them every time client is launched- very counterproductive in Enterprise installations if a camera online is not to be part of the system

By contrast, Milestone, Genetec, Video Insight and Exacq needed the user to trigger the discovery, which requires finding the button, clicking it and waiting for the scan to run.

There is a fine balance between the number of options available in any one module where it can get overly busy and complex (but allow for more focused discovery as Genetec and Milestone offer) versus other interfaces where a simple one, all cameras on the network, approach as in the other VMSes.

Here is a summary at a glance: 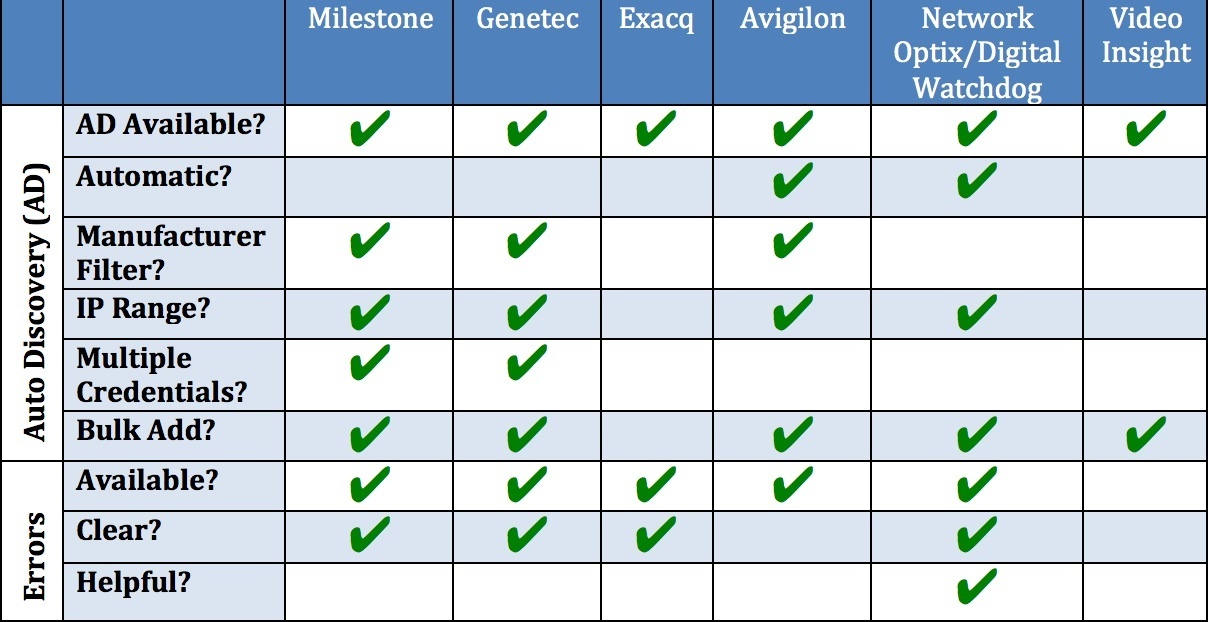 Network Optix/Digital Watchdog was the quickest; the VMS immediately searches and adds the cameras to the server using default credentials so monitoring can begin immediately.

Milestone offers the most options for customizable camera additions (Express, and Advanced) taking into account varying levels of users: beginner-advanced. There is one distinguishable CSV export option for those that are really organized (and advanced) to begin with- it allows for a one-click import list of all cameras whether they are online now or not, so configuration can be done independent of an installation.

Here is a sample of the CSV file:

Their advanced option allows users to not only discover cameras, but also checks to see they are valid by testing the credentials added, allows for naming the cameras, and checks that the connection is valid- configuring while adding, rather than just discover as done in Video Insight where only discovery is allowed.

With the advanced UI there are several options all available in one screen so selecting more than one range and adding multiple camera credentials at once could significantly add to the discovery time due to the number of iterations of each set of credentials.

Exacq’s Auto Discovery lagged competitors. They allow the user to add credentials on an individual camera’s basis and confirm password as well as connectivity. However, they lacked the ability to add bulk number of cameras from the discovered list requiring users to select, and add individually. Furthermore, the UI lacked any user feedback: no progress bar or row selection indicator.

Video Insight's one click Auto Discovery was fast to discover cameras on the network, it offered a progress bar and the ability to add all cameras at once. However, it offered one set of credentials for ALL cameras discovered which may not apply. Furthermore, there is no validation or configuration while discovering which results in a myriad of gray, un-streaming cameras while still displaying cameras with green icons assuming they are working. There was not a specific IP range selection, or manufacturer selections available either. In this VMS, the discovery is only that, while configuration has to be done after discovery is completed.

Troubleshooting camera errors was non existent and actually showed several low level errors (Object Reference) in System Log while visually not showing any camera specific information such as loading, no signal, or no indication as to credentials validity.

Avigilon's auto discovery was automatic, but unlike Network Optix/Digital Watchdog, they do not auto add to the server leaving that option to the administrator to pick and choose. The available camera search was limited to one manufacturer at a time when using an IP range due to differences in port numbers which allotted for a single port entry at a time.

Genetec's Auto Discovery was problematic; it has several issues that get in the way, rather than help the end user. Though it discovers cameras, it shows them duplicated (which do I choose?).  Attempt to select all and timeout sessions will appear for each connection- making the user add them one a time contradicting the ability of adding them in bulk. Furthermore, adding Bosch (NBN-932V) cameras seems to be a big issue - they result in issues with archiver, ghosting (readding a previously added camera) and duplication although they are on the supported list.

The option packed Auto discovery tools as seen in Milestone, and Genetec took ~15-20 minutes when all custom options were used: several credential sets, IP Ranges and all manufacturers.  Albeit it is more common to have users select a specific manufacturer and one IP range.  In that case results can be received within a minute or less - for those that have a varied number of camera manufacturers and pre-existing credentials adding them all to the auto discovery would add to the discovery time, though one would think it would further reduce it since the information is known and provided.  This approach, though considered slow to some, saves on configuration after the discovery.

On the other hand, when the stripped down version of auto discovery is used as in Avigilon, Video Insight, Exacq, Milestone Express, Genetec (with limited manufacturers), and Network Optix is used all cameras discovered are added to a list, so although the user spends more time post discovery to configure, the search itself is quicker and unspecific.

Cameras' inability to stream to a VMS can be caused by many different issues ranging from the camera itself, lost packets, service, network or as simple as incorrect credentials.  Moreover, discovering which of those is the culprit can be time consuming. The VMS should assist by providing as much detail as possible as to pin point the issue.

Network Optix/Digital Watchdog was the most forthcoming VMS by clearly displaying the errors (instead of just Logs) and running down a list of checks (via Diagnostics) by visually displaying which passed and which need correction as well as where to correct the issue. 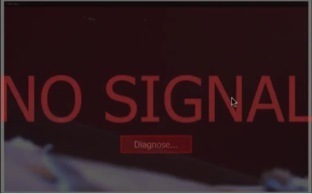 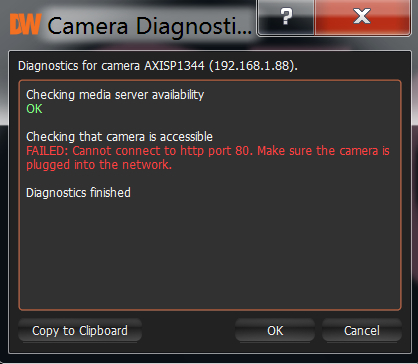 Milestone offered visual feedback and a 'verification' process during auto discovery with the CSV import offering exact field errors, though a simple error, as duplicate camera name, was displayed as ambiguous invalid data only message. 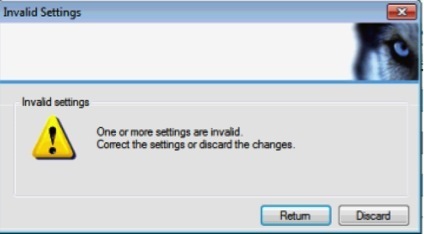 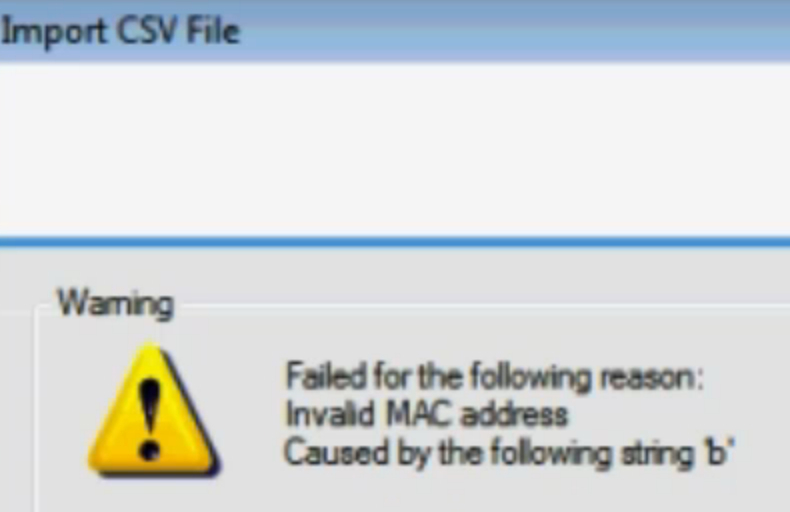 Video Insight was the worst by not offering any immediate feedback (and lacked understandable system log entries) when adding cameras, so all of them were added gray(with no visual feedback as to the cause), but green indicator icons still indicated a working/streaming camera.

When camera signal is lost here is a generic error: 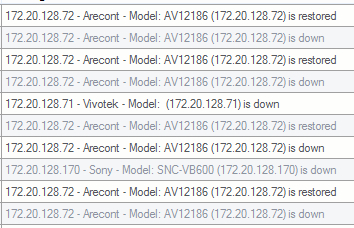 And when some cameras are added, here is a sample error in System Log:

Exacq, however, at least offered some instant feedback whether camera connectivity was underway.

System Log entries were just as ambiguous listing "Due to errors.." as a cause much like Avigilon's pop-ups (Avigilon's System log offered "Data not received" indication) though some errors, such as Socket or resolution errors were more descriptive, but didn't elude to resolution. 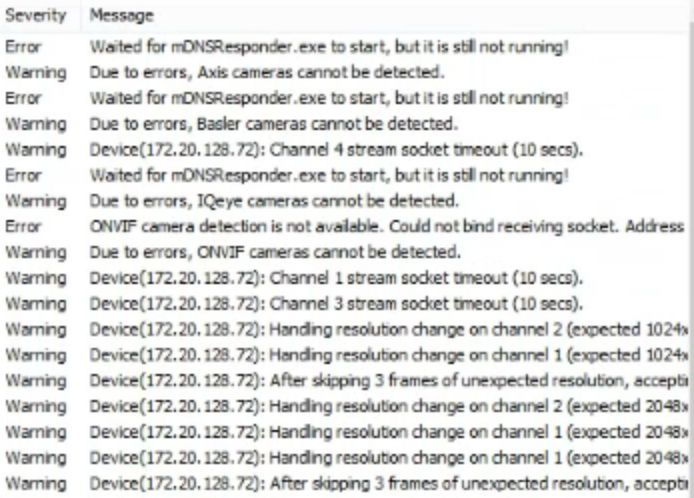 Genetec offered the limited 'Timeout' errors and a single descriptive 'bad logon' error leaving the user wondering as to why bulk adds result in timeouts. Furthermore, notice the Bosch error of "Existing somewhere else"- is the VMS sensitive to having one camera added to more than one server?

Here is a sample Timeout error: 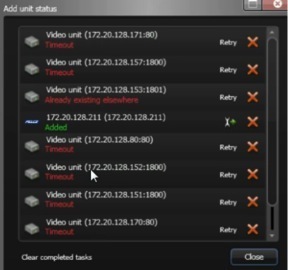 IP Network Setup Guide for Surveillance on Apr 06, 2015
In this guide, we teach the fundamentals of setting up an IP video...
Directory Default IP Camera Addresses on Feb 13, 2015
Initializing IP cameras can be tedious and frustrating, made worse because...
Comments (7) : Subscribers only. Login. or Join.