Videofied's updates to their video intrusion platform aim to bring outdoor intrusion detection to the masses, with lower prices, new outdoor detectors, and a new series of panels.

In this note, we look at the details of these releases, their 'filtered monitoring' intrusion monitoring concept, and the potential impact of these updates. 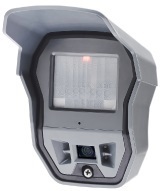 The DCV651 outdoor MotionViewer has been replaced with the new OMV601. This model adds several improvements and new features:

The OMV601's MSRP is $400 USD, significantly less expensive than the DCV651, which was $600. This price also includes the standard mounting arm, which is not included with the DCV.

The new W Series control panels are intended for indoor residential and small commercial applications which do not require I/O connection to external devices and existing alarm panels. Add-on boards for Wi-fi and I/O (1 in, 2 out) are available, as well as a hardwired siren, all options not found in other panels. Note that the W series is indoor only, with no outdoor model with built-in antenna as there is in the XT line.

MSRP is also much lower than the XT series panels, $151 vs. $476 for the basic Ethernet-only panel. This pricing is similar to many traditional wired intrusion panels, e.g. Honeywell/Ademco, DMP, DSC, etc.

With the introduction of lower cost outdoor MotionViewers, Videofied is promoting what they call "filtered monitoring." Using Videofied's smartphone app [link no longer available], users are first sent alarm video from the central station, where they either confirm or cancel the alarm by pressing corresponding buttons. Police are only dispatched if confirmed (or if the user does not respond in a set period of time), reducing the number of false alarms.

Additionally, users may receive video of valid non-alarm events, such as package deliveries or children arriving home and either ignore them, in which case no action is taken, or disarm the system to prevent repeat alarms when family is home.

Using filtered monitoring, Videofied aims to bring outdoor detection to residential applications where it has typically been too prone to false alarms to be practical, as children, neighbors, workers, or deliverypersons may unexpectedly enter the detection area, along with animals, debris, and moving foliage triggering nuiscance activations.

This approach is a sort of hybrid between self-monitoring, where users only receive alerts on their device, without using a central station at all, and full central station monitoring where the dispatch operator determines what is and is not a valid alarm.

Videofied's lower pricing on these new models will likely help to bring them into smaller commercial and residential applications which have been limited to lower cost incumbents. Further, their filtered monitoring approach is a novel concept which could reduce false dispatches, especially attractive to entities which have been cited for costly false alarm fees. However, for those looking for rock bottom burglar alarm pricing or advanced home automatioon features, Videofied will not be a fit.

Finally, for wide area detection, analytic platforms such as Avigilon/VideoIQ remain a better fit, as the OMV's PIR coverage pattern is still limited, ~40' range across a 90° pattern. By contrast, VideoIQ analytics claim up to 500' range, albeit using a narrower 33° HFOV. Multiple MotionViewers may be used to cover the same area, though this increases installation and configuration costs compared to a single Avigilon analytics camera.