Video analytics remains one of the most controversial areas within surveillance today, fueled by new bogus claims from one fringe player after another. However, certainly some video analytics are being used but how much and what types?

To find out what integrators really think of analytics and how often they are actually deploying them, we asked two video analytics questions as part of our Fall 2011 integrator survey: 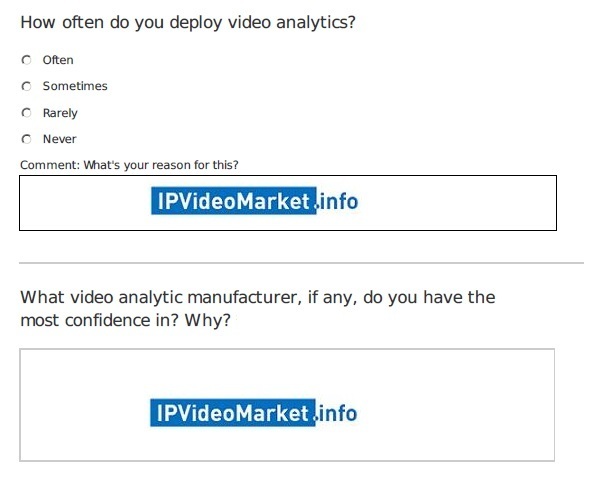 The second question was left open-ended, so integrators could choose their favorite instead of being confined to a preselected list of options. We also gave space for comment so they could explain their choice, or why they did not deploy analytics.

Of 84 total responses, over twenty unique analytics providers were named.

The most striking outcome of the survey was confirmation of how infrequent video analytics are being used and the widespread lack of confidence in video analytics.

Responses to our first question shaped up like this:

Based on these numbers, 60% of integrators rarely or never implement video analytics. Some trends emerged, which we examine below. One factor which made little difference was geography. US vs. international responses did not materially differ.

We are not surprised by these numbers, as analytic performance has yet to match up to marketing claims, with few exceptions. Indeed, in commenting on this question, integrators most often cited performance concerns as their reasons for choosing rarely or never:

Those integrators deploying an average of sixteen cameras or fewer per site were nearly 40% more likely to never deploy analytics (33% vs 46%). This is likely due to the target verticals of systems this size, often small retail and commercial. These customers are much less likely to require analytic capabilities than more complex users. Systems size otherwise made little difference in deployment statistics.

In answer to the second question, regarding which, if any, analytics manufacturer they had the most faith in, integrators answered with the following responses: 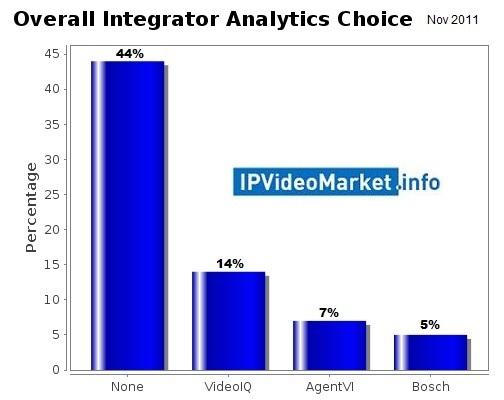 In the chart above, we included all respondents including a near majority who lacked confidence in any video analytics. Since, the percentage who had confidence in no providers was so high, let's take a look at the breakdown just for integrators who had a favorite: 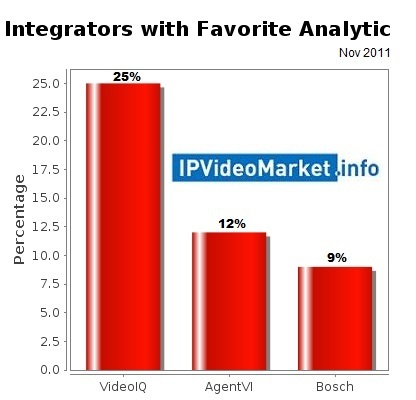 Based on those with a preference, VideoIQ gathers 25% of the vote, double the votes of runner-up AgentVI. Bosch gathers 8.5% of the vote in third. Cernium and Sightlogix both received a few mentions, with about 6% each.

What is most clear about this survey question is how fragmented the video analytics market is, with numerous small players, yet few companies showing any sort of dominance. Among integrators having a favorite, the top three responses only gathered 45% of votes, much lower than in VMS software and IP cameras where the top three gathered over 60% of the votes. Respondents answered this question with a total of 21 unique manufacturers. This is more than the number of unique IP camera manufacturers mentioned in our favorite IP cameras poll question. Yet, 44% of respondents had no preferred video analytics provider, compared to only one integrator claiming no IP camera manufacturer preference.

If there is one manufacturer who stood out as a leader in this poll, it is VideoIQ. Among those with a preference, VideoIQ received 25% of votes, twice that of AgentVI. Most often, reliability and ease of setup were cited as reasons for selecting VideoIQ over other options. Here's what integrators preferring VideoIQ had to say:

What's most noticeable about VideoIQ integrators' comments is how positive they are. Integrators who like VideoIQ seem to really like it. Contrast this with the two competitors below, which sound less noticeably positive.

Here's what users had to say about AgentVI:

The first thing readers may notice about these comments is that they seem much less enthusiastic or full of praise than comments regarding VideoIQ. It is not surprising, however, that AgentVI is in this second place position, however. Multiple manufacturers sell or have resold AgentVI analytics. Their compatibility with Axis is likely to make them more attractive to Axis partners, who can then use familiar Axis products, instead of learning a new camera line such as VideoIQ.

Respondents had the following few comments about Bosch:

Again, these comments are less overwhelmingly positive than VideoIQ, and tempered with mention of Bosch's limitations.

SightLogix gathered only a few percent of the vote, not surprising given their higher cost and specialized application. However, integrators who deployed SightLogix seemed to have very positive comments regarding its performance:

One noticeable absence from these results in ObjectVideo. Given they had partnerships with practically every major VMS player, and the number of OEM partners they have (Cisco, Digiop, Pelco, and many more), the fact that they received no votes is telling. Indeed, there was only one mention of ObjectVideo, and it was a vote of no confidence.

One other clear trend from the results is that the top choices overwhelmingly ran on cameras which goes back to the long standing 'Edge vs Core' video analytics debate. As we analyzed in our recent Ranking Video Analytics Architecture note, pushing analytics to the edge generally increases analytic performance. Given this, the integrator's favorites are in line with what is most likely to deliver robust field solutions.

One interesting trend which emerged at the other end of the spectrum was the use of remote monitoring services. A handful of integrators answered that they were offering video monitoring services, and analytics were key in those deployments. While this is a small number of respondents, it is a non-trivial number. If we had asked this question a year or two ago, we suspect there would have been next to none offering these services.