For more than a decade, video analytics has been the great hope for the surveillance industry. Indeed, it remains the pick as the Next Big Thing.

Yet the past 2 years has been rough, with ObjectVideo's lawsuit campaign against almost every major industry manufacturer and no investment / new startups in the space, culminating with one of the biggest names, VideoIQ, being acquired at less than their total funding.

IPVM has conducted a survey of 120+ integrators from over 20 countries, answering:

Integrators are not deploying a lot of analytics: 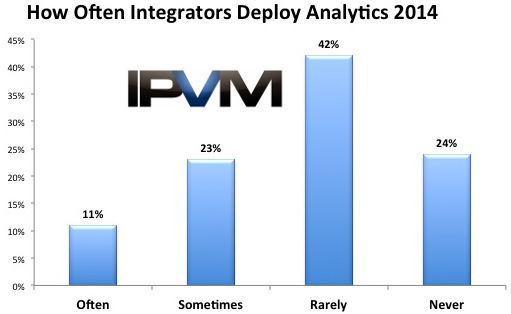 Indeed, the rate is actually slightly worse than it was in 2011: 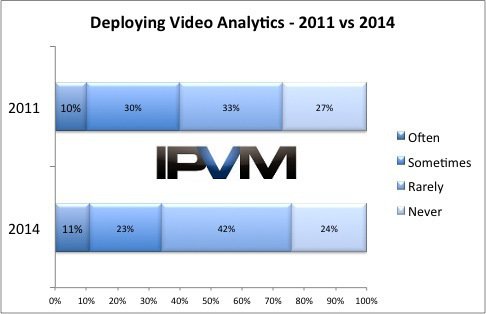 With quite a number moving from sometimes to rarely.

Video analytics had problems in 2011, and without solutions to those problems, it is hard to make progress, despite naive people who use to claim it was just an 'educational' issue.

Why or Why Not Analytics?

Let's first start with the integrators who say they never deploy analytics.

Problematic performance was the #1 cited reasons:

Quite a number, also mentioned no demand:

While it is believable that there is minimal demand, we certainly believe there is a fit in any and every market for video analytics that work well - even residential applications would benefit from knowing / tagging potential intruders as well as improving search.

Contrast to those who often deploy video analytics.

Monitoring and perimeter protection were the key themes here:

Results were similar to 2011, with none 'winning' and VideoIQ being the favorite of those who had a selection. Two big surprises were the emergence of Axis and Mobotix, who back in 2011, had no votes and no real offerings.

Given that 2/3rds of integrators rarely or never deploy analytics, it comes as no surprise that nearly half of all respondents did not offer any selection for favorite, with many writing in "none", or "n/a".

Contrast to cameras and VMSes, where essentially everyone had at least one favorite.

VideoIQ pulled in ~15% of the vote, similar to their performance in 2011, and still more than twice of the next manufacturer.

This is good for Avigilon, as it gives them an impressive all-around Top 5 favorites for IP cameras (2nd), VMS (4th) and video analytics (1st). No one else had such showings in all 3 categories and only 1 had it in even 2 of them.

While a distant second after VideoIQ, Axis established itself as the 2nd most favorite analytic.

Tripwire does work fairly well (see our test results) and given that it costs essentially nothing and comes from the most widely used IP camera manufacturer, there is logic behind this.

On the other hand, Axis does a relatively terrible job marketing / promoting any of their analytics (including VMD2.1 which is free and works very well). And even though they support 3rd party analytic apps (via ACAP), those receive almost no promotion and, worse, without any real clarity about how well any of them might work.

One interesting sign is that Axis has just recently started to add higher end analytics into their cameras, but for now, only on their 1080p PTZ.

If Axis gets serious about their own analytics, this showing demonstrates that they could easily become the industry's favorite analytic provider, simply leveraging their position in cameras. And with Avigilon loading up with VideoIQ, they should have more motivation to do so.

Sightlogix had a solid showing as they continue to represent a niche in the market for higher end, 'military' style analytics. Integrators noted:

The main challenge, is that even at decreased prices with a new generation, they still remain very expensive for the mass market.

AgentVI still received some votes, though down from 2011, with integrators noting:

AgentVI's hybrid model was more interesting / appealing in the past decade when processing power was limited. Now, the challenge is that it is 'pricy' and requires adding it on to cameras and/or servers.

Mobotix only released analytics in the last year or so but they received a number of selections, with integrators noting:

Its free and does work fairly well (see our test results). The only downside is that its requires one to use Mobotix.

Iomniscient is the only analytics company left making bold claims (save for BRS Labs who is, well, in their own wild world). It seems to be paying off, at least somewhat, as 3 people cited Iomniscient being their favorite (BRS Labs had none).

Since acquiring ioimage in 2010, DVTel has essentially hidden their analytics (on purpose or not). They only received one vote despite the fact that the company still has a reputation for high performance. New products are planned for this year and with the VideoIQ deal impacting channel availability, DVTel has an opportunity to regain some ground in analytics.

The market for video analytics is still wide open and the shifts from 2011 show that incumbent IP camera manufacturers can likely dominate video analytics by simply being aggressive about moving into the space with product that perform adequately - a feat far easier today than a decade ago during the initial entry of video analytics into surveillance.