The US State Department has called out "Chinese tech giants" for being "tools of the Chinese Communist Party" in a blunt new speech that makes clear US government concerns over PRC-made technology.

The speech was published on the State Department's website, from Christopher Ashley Ford, Assistant Secretary of State for International Security and Non-Proliferation.

Calls out Huawei 'and Its Siblings'

While the speech did not name the specific 'siblings', it is clear from the NDAA ban of Huawei, Hikvision, and Dahua equipment that the US government considers these firms 'siblings'. The State Department itself "issued a warning in May 2017" against video surveillance equipment from Hikvision and Dahua "citing cyberespionage concerns from China", according to a recently declassified DoD report, excerpted below: 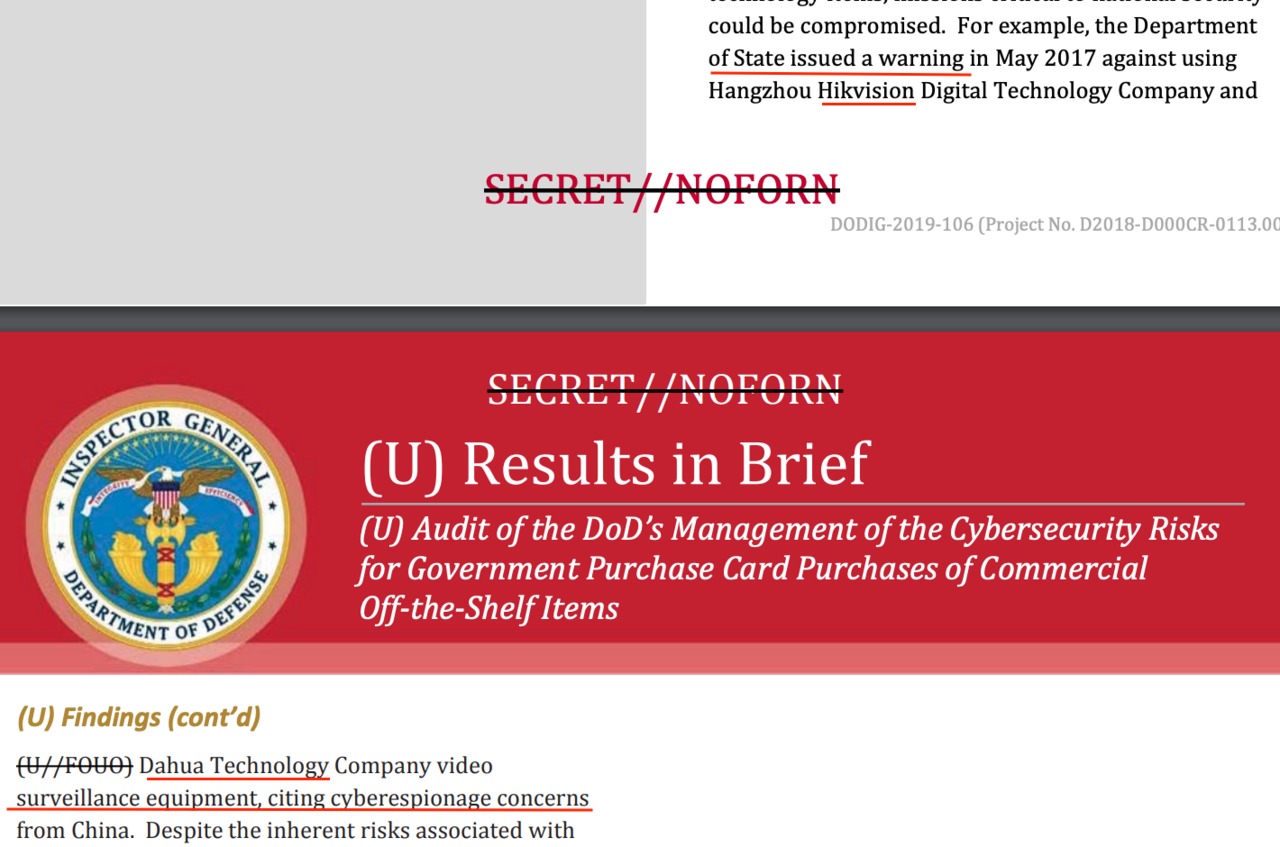 Christopher Ashley Ford holds a Ph.D. in international relations from Oxford University and has written two books on China. A former Navy Reserve intelligence officer, he was nominated to his current post in October 2017.

The speech, made at the September 2019 Multilateral Action on Sensitive Technologies conference in Washington DC made a number of notable points.

No "Genuinely Private Companies" in China

Though they may have formally private ownership and operate in the national and in the international marketplace, global Chinese firms – including Huawei – are in key ways not genuinely private companies and do not make decisions entirely for economic and commercial reasons. Whether de facto or de jure, such giants can in some important respects or for some purposes act as arms of the state – or, more precisely, the Chinese Communist Party, to which the Chinese state apparatus is itself subordinate.

It is important to remember all this, because when push comes to shove with the nominally private Chinese technology firms – that is, when Chinese Communist Party authorities really want them to do something – they too will almost certainly act, and must therefore be treated, as the functional equivalent of state-owned enterprises. This is critical, inasmuch as their non-separateness from the Chinese Communist Party’s authoritarian governance system makes these companies enablers for and instrumentalities of Party power. [emphasis added]

There is also a deep bench of expansively-worded Chinese laws that require cooperation with state officials in virtually all matters, a heavy-handed security apparatus in no way shy about using such coercive tools, and a Party-run judicial system that precludes effective legal recourse to anyone with whom the Chinese Communist Party disagrees. [emphasis added]

China Tech Firms, Unlike US, Cannot Say No

Accordingly, if a Chinese technology giant has access to your technology, your information, or your networks and the Party comes asking, the only answer the company can give is “Yes.” This is, unfortunately, a fact of life in the high-technology police state that is the modern PRC. If the U.S. government, by contrast, asked Google or Facebook for all of their user information, we would almost certainly be challenged by lawsuits – rightfully so given our respect for privacy and rule of law.

No End in Sight Unless CCP "Fundamentally" Changes Course

Unless the Chinese Communist Party fundamentally changes its strategies for economic development, military development, and control of its civilian population to prevent any organized opposition to its continued rule, it is difficult to see how China can change its strategies for using domestic companies to advance China’s national goals.

Chinese Tech Giants "Standard-Bearers... for Technologies of Repression" in Xinjiang

China’s technology “national champions” are the standard-bearers for the surveillance and information-facilitated coercive technologies that are making this oppressive police state possible, and jurisdictions such as the oxymoronically named Xinjiang Uighur Autonomous Region are where the pilot programs and proof-of-concept studies for these technologies of repression are being developed and carried out. These technologies are vital to China’s repressive campaign against Uighurs, ethnic Kazakhs, Kyrgyz, and other members of Muslim minority groups, resulting in the detention of at least one million individuals in internment camps since April 2017. These companies have helped the Chinese Party-State develop these tools, they are working with Chinese Communist Party authorities to test these grim methods on China’s own population, and through their foreign engagements they are making the export of such techniques into a key component of how Beijing is promoting and expanding its own repressive governance model worldwide. [emphasis added]

The State Department speech is notable for spelling out in very clear fashion the risks posed by Chinese tech companies, given China's authoritarian political system. Ford's concerns are not new, of course, but until now the US government has not laid them out so directly.

Technology industries, like video surveillance, are caught in the middle of this. Many have profited greatly from "Chinese tech giants" including US ones such as Honeywell, Stanley, and UTC as well as many smaller resellers. This leads to many industry leaders protecting and effectively opposing the increasing concerns, warning and even legislation from the US government.

However, as the US government makes clearer its position that "when push comes to shove", their PRC tech partners will do the Chinese government's bidding, US industry will need to determine how to proceed.