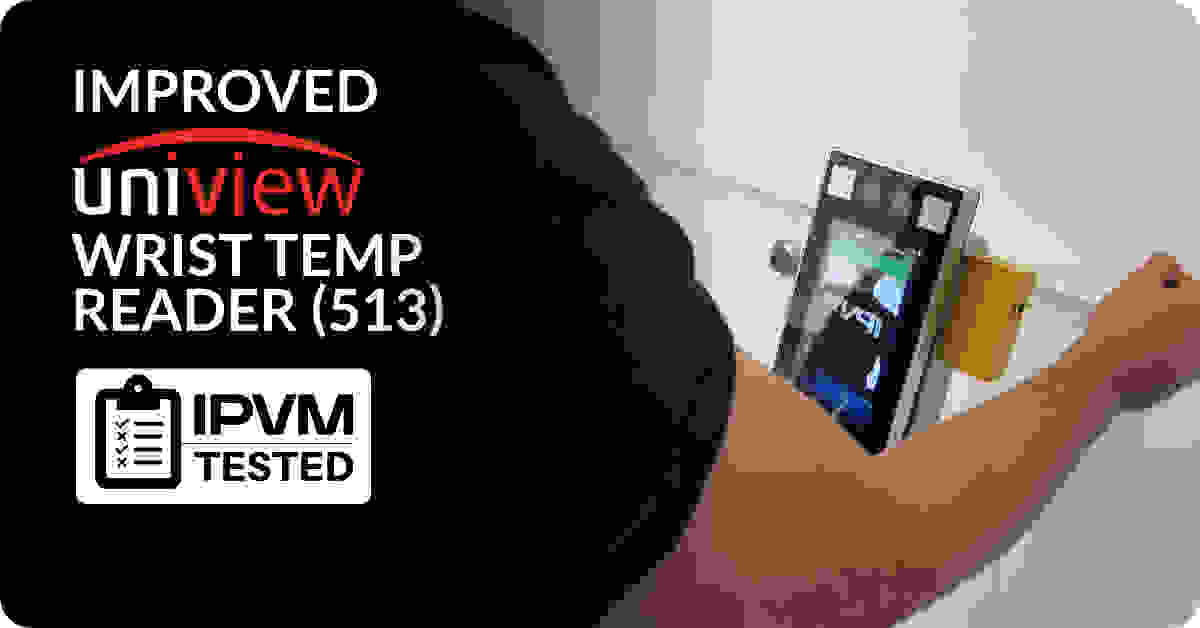 In this note, we report our results on the newer OEP-BTS1-BD-NB wrist temperature measurement device, which we bought and tested with the OCT-513, examining:

On the positive side, the improved OEP-BTS1-BD-NB with the OTC-513 restricts read range, eliminating inaccurate readings from people holding out their arm more than ~2" / 5cm from the device. The new temperature reader performed similarly in all other ways.

Also, positive, our testing found no signs of the device rigging or smoothing temperatures. On the other hand, related to this, often the device will return far lower than normal temperatures depending on the environment and arm positioning.

On the negative side:

Uniview's pedestal mount makes installing the Uniview kiosk and reader easier, with space for splicing and connecting wires directly behind the tablet and into the module. However, the pedestal is short (~3'9.5" tall), requiring even average height users (~5'6-5'9") to bend down to the kiosk so head and wrist position is correct. Installers/buyers may want to consider a means of artificially raising that height to accommodate an overall taller user base.

Also, we found far less scientific backing and government guidelines (e.g., none from the FDA) on using wrist measurements in comparison to the forehead or inner canthus so for users that want some legal assurances or backing, this could be an issue.

We tested the Uniview wrist reader with a blackbody to see if temperature measurements were being manipulated in any fashion, such as average, boosting, or lowering. 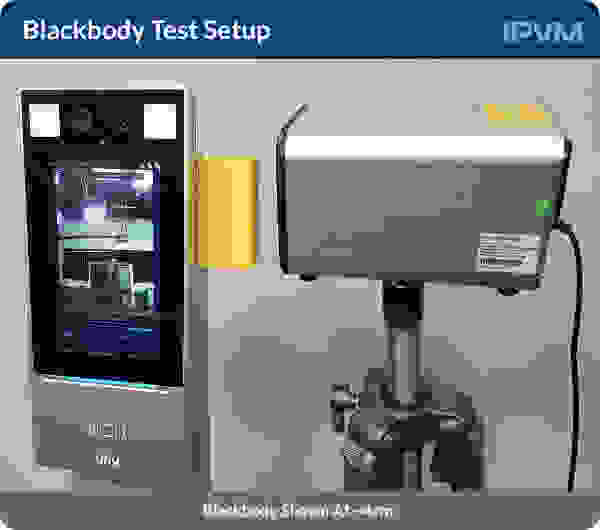 From our test with a blackbody, we noted the following:

The chart below illustrates the increase of Uniview's wrist kiosk temperature measurements as the heat of the blackbody increased, with 2cm, 4cm and 5cm distances labeled. 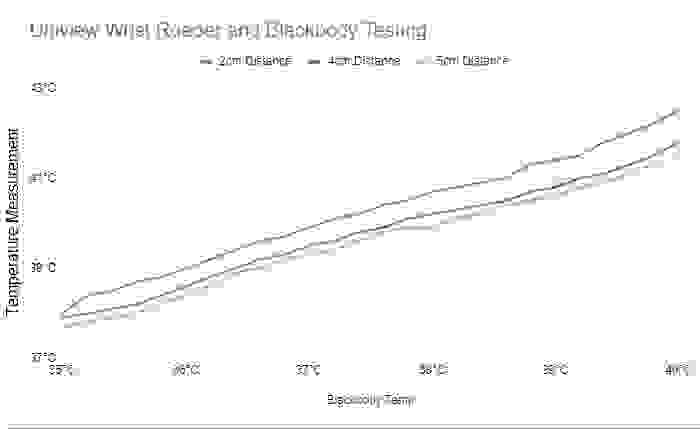 The newer Uniview wrist reader's distance detection rejects measurements past ~5cm distance, compared to 15cm or more in the previous model, which led to drastically lower measurements. Uniview recommends users scan their wrists ~4cm away from the device (~1.5"). 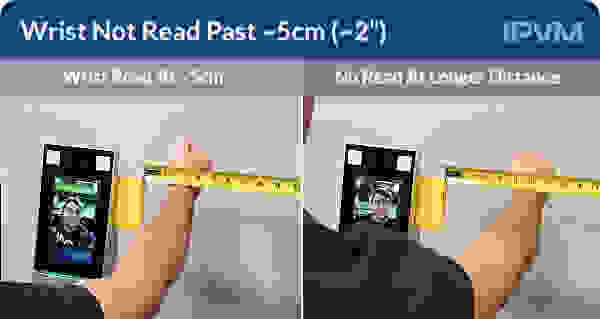 Side by side, both sensors use a thermopile sensor for measuring temperature, though the newer wrist module has an additional sensor that is used to detect wrists within ~5cm. 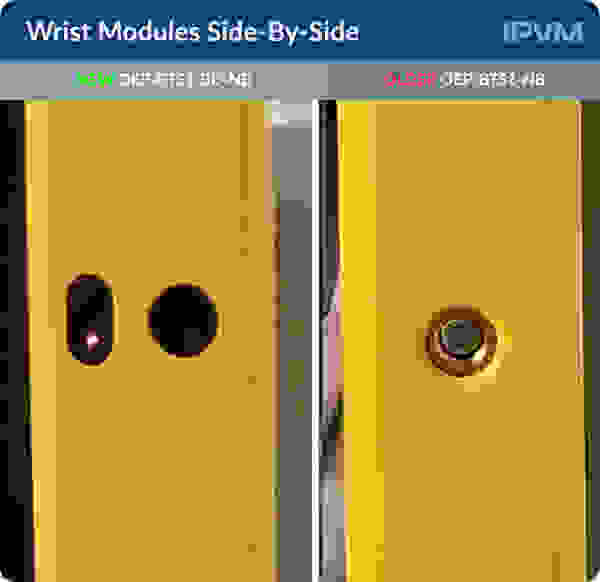 Unfortunately, a shallower max distance for wrist temperature measurements did not eliminate the possibility of missing elevated temperatures. While uncommon and infrequent during testing, elevated wrist temperatures could still be missed by the device, whether due to improper wrist alignment, a missed measurement due to wrist movement or distance, or intentional/unintentional spoofing. 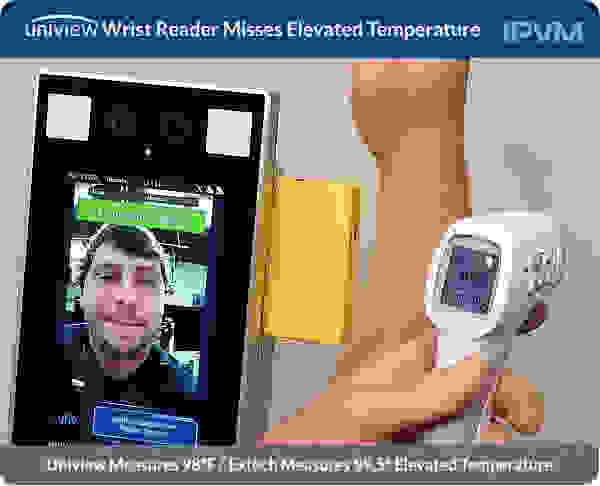 Wrist temperatures during testing were, on average, between ~1°-2° lower than forehead temperatures. Using the K3 Pro Wall Mounted IR Thermometer, we can demonstrate this difference with a "normal" healthy subject, showing 97.6°F on the forehead, and then showing 97.1°F on the wrist. 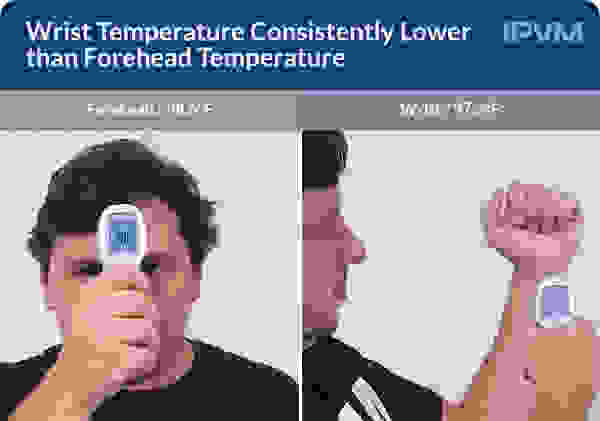 Uniview's explanation for using wrist temperature measurement is that the wrist is less affected by environmental or physiological factors.

Forehead temperatures are easily susceptible to the air temperature and wind speed, which could result in measurement errors.

In our testing, this was false, with temperature variations due to sunlight/warmth or cold, similar to the forehead. With our subject standing outside for ~5 minutes in ~48°F weather, Uniview's kiosk will measure wrist temps that are low, and will notify the user of such. Wrist temps were low enough to not be measured/output on either of our K3 Pro wall mounted or EXTech IR guns. 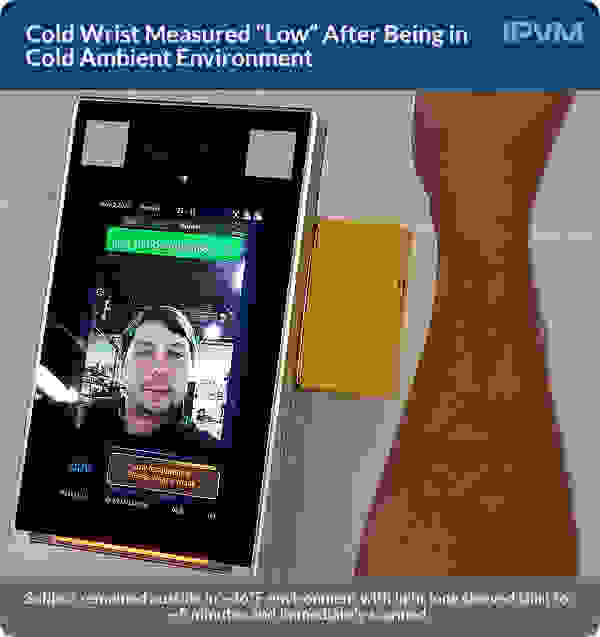 The US FDA told IPVM that:

The FDA is aware of some thermometers that utilize the wrist as an axillary measurement site. An FDA-cleared example of this is the TD-1035 Thermometer, 510(k) number K152680, which is designated under product code FLL – clinical electronic thermometer.

However, the FDA had no guidelines or resources, etc. for the wrist as they do for forehead / inner canthus. No doubt, this Uniview unit qualifies as a medical device under FDA definition, i.e., this is a medical purpose.

Moreover, the 510(k) wrist temperature unit the FDA mentions is a wearable device (i.e., like a watch) that operates fundamentally different that the swipe and go method of the Uniview device.

To use the Uniview wrist temperature module, users simply present their wrist to the reader while standing in front of the kiosk, with a measurement produced in ~1 second or less. Uniview's specified range is 1-4cm (~0.4-1.6"). In our tests, the improved wrist measurement module does not measure wrists past ~5cm.

The low height of the Uniview pedestal allows for users of varying heights to easily present their wrist for measurement. However, taller subjects may have difficult aligning their face and viewing the terminal's screen while being measured as they must stand closer to present their wrist.

Users unable to present a wrist due to physical limitations will not be able to be measured by the kiosk, and a different form of temperature measurement must be used

The wrist temperature module does not have any sort of intelligence and will measure any object presented. This means forearms, back of hands, and palms could be measured as normal as long as temperature is below threshold. We found a difference of ~1-2° on average between different parts of the arm, with the palm warmest, and back of the arm the coolest.

In our discussions, Uniview pointed out that the terminal is not intended to be used unattended, to account for these issues:

OET-213H is a preliminary temperature screening system. It’s recommended to have staff on-site to handle such accidental events or abnormal cases.

Uniview points out that the "Neiguan point" (shown below) is the optimum target for wrist measurement, about three finger widths below the palm of the hand. In our testing, temperatures around this point did not vary significantly, with a deviation of ~0.2°F within ~2" of this point. 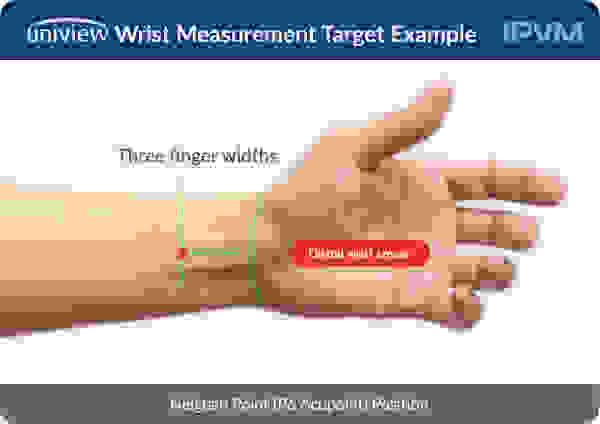 Uniview recommends users clear the wrist area for accurate temperature measurement, including sleeves, watches, and other jewelry. In our tests, attempting to measure through sleeves produced low temperatures, usually beneath 97°F, shown below. 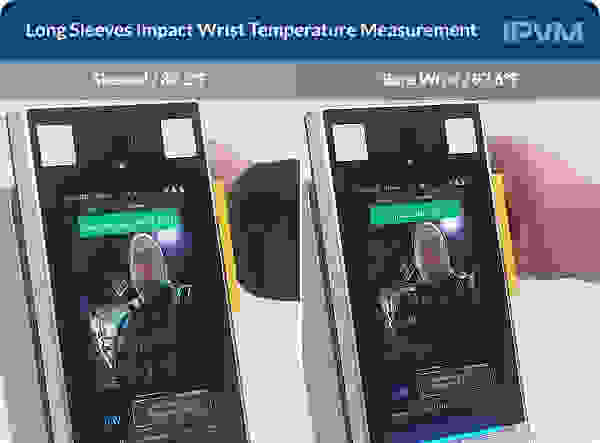 Watches resulted in low temperature measurements if the band was allowed to obstruct the wrist, shown below. However, this did not occur in all reads. Users could simply push the watch up the wrist to ensure proper measurement. 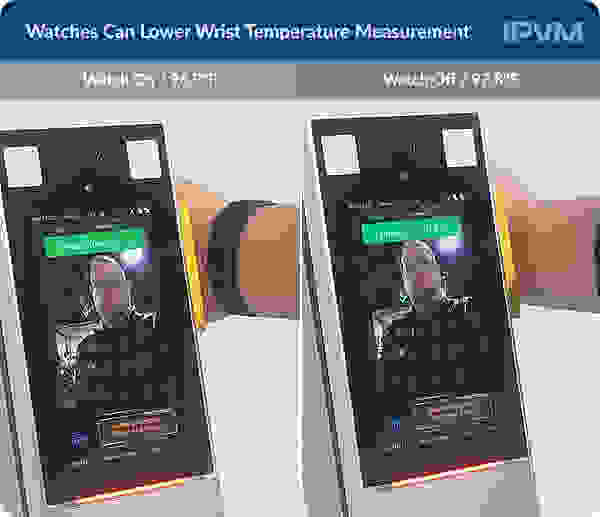 Uniview's OET-213H-BTS1 wrist temperature measurement kiosk is similar in form factor to other thermal measurement kiosks. The video below is from our previous test of Uniview's wrist reader, though connecting the newer OEP-BTS1-BD-NB wrist measurement device is the same.

IPVM purchased the pedestal mount in addition to the OEP-BTS1-BD-NB. Mounting the devices is much simpler, as is servicing the kiosk, as it can simply be rotated and back panels removed to access wiring.

The Uniview OET-213H-BTS1 has no user-configurable temperature offset or calibration settings. From the web GUI, the only offset that can be altered is an alert offset which has no impact on temperature measurement.

In the video below, we show off the kiosk's slim thermal temperature settings, while also showing off a few other admin configuration changes that can be done directly through the kiosk. 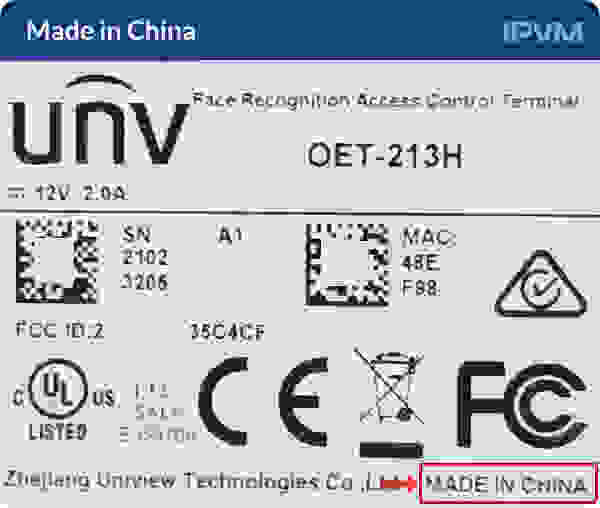