4K is one of the next growth areas for IP cameras. Indeed, with major new announcements at CES 2014, it may more quickly impact surveillance monitor selection first.

Historically, some objected to multi megapixel cameras because of monitor resolution constraints. Though digital zoom, especially for investigations, still made it useful, clearly being able to display multiple cameras at native resolution live and without zooming holds benefits, including the potential to make it easier for guards to spot problems (and lose focus less quickly).

At the same time, 4K monitors, until recently, cost thousands of dollars, and were mainly the province of high end entertainment centers rather than industrial security.

Now, with one manufacturer, Seiki, offering a 39 Inch 4K monitor for the almost unbelievable price of $499, that opens up new opportunities. Equally important, at CES 2014, Dell, ASUS and Lenovo all announced [link no longer available] 4K monitors for less than $1,000. Plus, Seiki announced a 28 inch 4K version that will be even less than the current $499 one.

In the summer 2013, we had a discussion on What Is The Highest Resolution Surveillance Monitor You Used? and the options then were quite limited but Ray Bernard outlined good potential use cases:

I'm looking at "4K Ultra High Definition" monitors for two current projects. This is based upon monitoring operations requirements scenarios that won't be universal, but do exist in the cases of two clients. I can see applications in retail (similar to my license plate example below) and casinos, but the use cases are very specific.

For one project a security officer will need to write down or radio out license plate numbers from a 5 MP camera's image covering a wide field of view in parking areas. The plate numbers are very small in the overall image, and so we design to at least double the recommended plate pixel width because you lose pixel resolution when the plate is at an angle.

This is always something to consider when applying pixels-per-foot or pixels-per-anything—they almost always refer to a situation where you are looking perpendicular to the target object. (John H: I already know you are not a fan of PPF, and I'd agree from the perspective that I've never seen a real-world application such as what we ran into, in the materials providing PPF guidelines.) Perpendicular views happen when the target object’s location and orientation can be well-controlled, a situation that's not often the case. So you have to design for whatever your real-world situation is.

In our case, when we tried to view the entire camera image on a 1080p display, the image was 25% of actual size. That view-time reduction of resolution (whether live or recorded) turned out to be at the crux of this use case, which comes from proof-of-concept testing at the customer site.

When a car was turning and we would get at best a 45°view of the plate—we would see one plate number on the laptop computer screen and a different number directly eyeing the plate, standing right under the camera. We’re looking at the image on-screen, and it’s not the number we saw and wrote down. When we resized the image on the laptop up to 100% actual size and centered on the plate, we then did see the number we had written down. Maybe it shouldn't have been a surprise, but it was.

This makes no difference in terms of investigative use of recordings—but it can make a heck of a difference in live monitoring. If the officer at the workstation radios the wrong plate number to the field officer, he’s off on a wild goose chase.

So we need a display that can provide the entire camera image on the screen at 100% actual size. That would have to be four times the 1080p resolution. See the image below for the visual explanation. 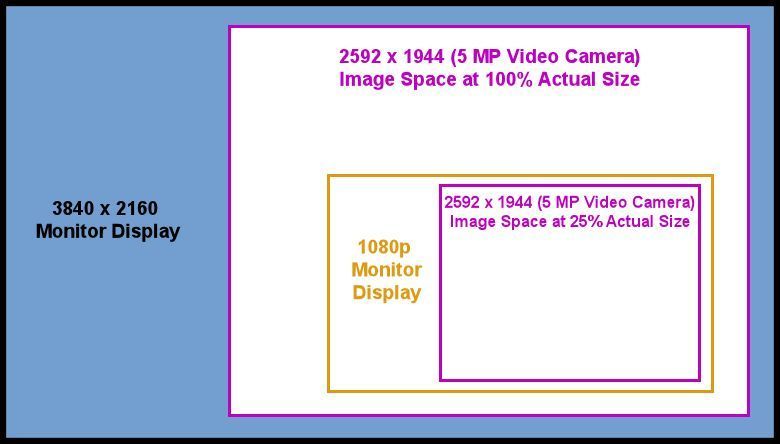 Use Cases Two, Three and Four

For another client we’re looking at video from parking areas (same as Use Case One above), factory floors (User Case Two), plus private and public events (Use Case Three). These use cases involve viewing video both at security monitoring workstations, and on a video wall (Use Case Four).

The factory floors use case involves reading labels on packages that move down the production line. This is for after-incident investigations use, but you still need to watch the video playback at 100% actual video resolution. Otherwise you can’t read the product packaging lettering clearly enough. The safety uses of the factory floor video also require high resolution review of recorded video where the full camera image is 100% actual size on the screen.

For the events use case we want to read license plates, attendee name badges, and get good facial images (at choke points) as well as get good resolution of overall activity. The name badge situation is similar to the license plate use case. We’ll need to view badges in real time on-screen at 100% actual resolution, at the security monitoring workstations. The video wall must have the same resolution as the monitoring workstations.

The Security Operations Center (SOC) video wall serves multiple security and operations stakeholders, and is actually a set of use cases. The video wall displays will be used by security personnel to view real-time dashboards for things like parking area occupancy, visitor tracking, virtual “Escort Me” tracking [link no longer available], television news feeds, live site security video and other data items. Viewed from 10 feet away by security staff, the images must be clear. Management and operations personnel may be in the SOC—or may be standing in the hallway watching the video wall (perpendicular view) through a large observation window, which will be 25 feet from the video wall. A 4x4 group of 60” 4K UHD monitors provides a 7680 x 4320 display capable of presenting a real-time dashboard, and alarm/incident status dashboard, live and recorded video called up by alarms, and views called up by security officers, plus other information displays.

I’m in the process of requirements development right now. The next step is to find appropriate video clips and still images to use for the various use cases, from the customer sites or other sources that accurate represent what we’ll be doing. This includes some example dashboard display images.

These will all go on a workstation computer with a video card that supports four 4K UHD monitors, probably the NVIDIA Quadro K5000 card.

With these new product options, what do you think about 4K for surveillance?