4K televisions and monitors are becoming increasingly available and affordable.

Below, we have the two monitors set up in our office displaying surveillance feeds side by side:

There is minimal practical benefit to using 4K monitors, unless large displays will be located directly in front of the user at close range, providing modest gains to fine detail inspection. Further, these limited gains come at a price premium over 1080p monitors of similar size, and likely require upgraded graphics hardware, further increasing cost.

A key challenge in using 4K monitors is graphics card support. First, many chipsets which support 4K according to specifications do not have current drivers allowing the resolution to be selected. Second, most built-in graphics cards found in laptops and desktops do not support 4K. Users should confirm directly with the PC manufacturer before 4K support is assumed.

For those using desktops, add-on graphics cards supporting 4K are readily available, at prices as low as $40-$60.

For the monitor comparisons, we break down the differences between the 2x2 and 4x4 matrix viewed on 1080p and 4K monitors. Then, we examine overview and zoomed images of 10MP, 5MP, and 1080p streams.

We recommend users click on the image provided in the report to download a full resolution comparison.

First we displayed four 1080p streams simultaneously. While the 4K monitor is able to view each of these streams at full resolution, details delivered to the viewer are practically the same in the 1080p monitor.

In this case, objects such as license plates and human faces are simply too small to be read or recognized, requiring digital zoom regardless of monitor resolution. 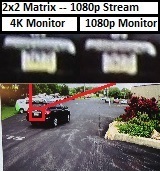 Using a 4x4 split screen, we viewed a single 1080p camera in the top left pane. In this example, again there are no practical differences to the 4K monitor.

Objects in the scene are more pixelated on the 1080p monitor, but again they are simply too small to discern at either resolution. The image below is a closer crop to the 1080p stream displayed on the 4x4 matrix.

Next, we looked at multiple resolutions in a single camera view on both monitors, beginning with a 5 MP stream, viewed at full resolution on the 4K monitor, and scaled to fit the 1080p display.

Viewing a human subject ~50' away from the camera, differences in the details of the subject's face and clothing are marginal.

Taking a closer look at the subject, differences in the subject are marginal. 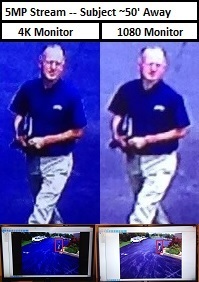 Looking at a license plate moving through the scene, the 4K camera is again slightly clearer, but plate text is again so small that this increase delivers no practical benefit.

Viewing the plate on its own, we still see that the plate text is small, delivering no benefit between using a 4K monitor. 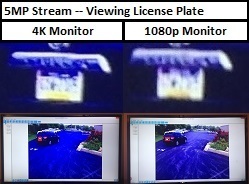 Finally, using a 10 MP camera, scaled to fit both displays (though less so using the 4K monitor), differences are again minimal in both human subjects and vehicles. 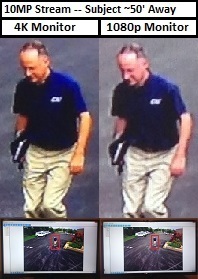 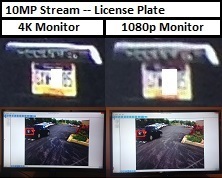 DeskCamera ONVIF Screen Capture on Jan 05, 2017
Recording PC screens have historically been an expensive proposition,...
Trend: 4K Monitors for Surveillance on Jan 10, 2014
4K is one of the next growth areas for IP cameras. Indeed, with major new...
Comments (8) : Subscribers only. Login. or Join.