The #1 IP camera problem is cost, as unique IPVM survey results show. Rectifying that is critical.

Last month, we received a (spam) email offering IP cameras, with integrated IR and ONVIF support for $29.90 from Wodsee [link no longer available].

We get hundreds of Chinese manufacturer spam emails monthly but this was, by far, the lowest price we have ever seen for IP cameras. Too good to be true? Perhaps, but too cheap to not try.

Here's what they look like in our test setup (from left to right, Dahua, Wodsee 1.2MP, Wodsee 720p and Hikvision):

The cameras worked, not perfectly, but far better than we expect for being so cheap.

Here are specific key findings from the test:

Users should not expect much, if any, technical assistance from Wodsee. We contacted Wodsee's technical support in two ways, via email and via phone. We have yet to receive a response to our phone call. By email, we asked for support in adding the cameras via ONVIF to a VMS. Instead, strangely, we received instructions on how to manually forward ports for remote access.

Wodsee cameras may be purchased directly from the manufacturer. They have no distribution or online sales. Pricing is as follows:

Considering their pricing, a fraction of even low cost competitors, Wodsee's cameras may be attractive to many users, especially considering their acceptable image quality and if they can be made to integrate with one's VMS.

Obviously, though they remain a risk, with minimal support and track record. If you really care about super low price, we think it is worth trying out but be careful in assessing long term risks and costs of using them.

This video covers the physical construction of the camera. Users should note two key issues:

Below is a teardown of the camera, performed after the IR cut filter got stuck after about a month of operation:

This image shows the effects of the filter being stuck: 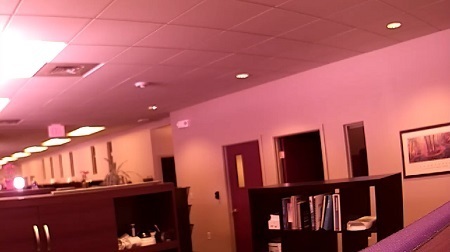 This screencast reviews the cameras' ONVIF conformance and integration with third party VMSs. The manufacturer claims ONVIF conformance, and ONVIF Device Manager reports it has implemented version 2.0, but it is not listed by ONVIF. Integration to VMSs is buggy. The camera can be added to both Video Insight and Milestone, while attempting to add it to Exacq or Genetec results in continuous reboots of the camera and no streaming video. RTSP streaming worked fine in all VMSs.

In full light, with a HFOV of ~24' (~53 PPF), both Wodsee cameras perform comparably to low cost IR models from Dahua and Hikvision, with no notable issues. Colors are displayed differently on each of the Wodsee cameras, with the WIP130 warmer with slightly truer color.

In low light, with IR on, the Wodsee cameras again perform similarly to Dahua and Hikvision. In this case, the WIP130 is slightly clearer, with lines on the chart easier to read, though the bottom lines become washed out around line 7.

Specified IR range on both Wodsee cameras was listed as "20-30m." We found ~15m to be the actual effective range: 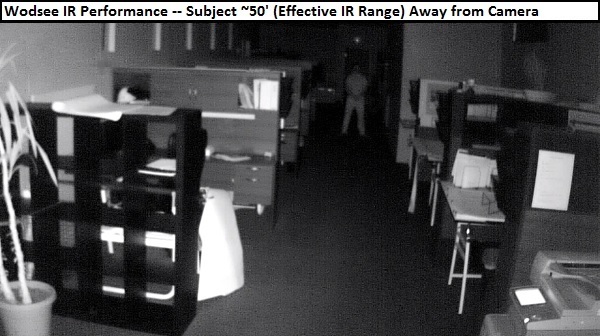 Illumination was weak at 20m, with the subject much more difficult to spot: 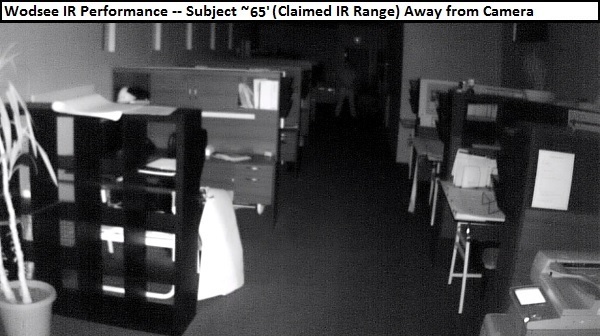 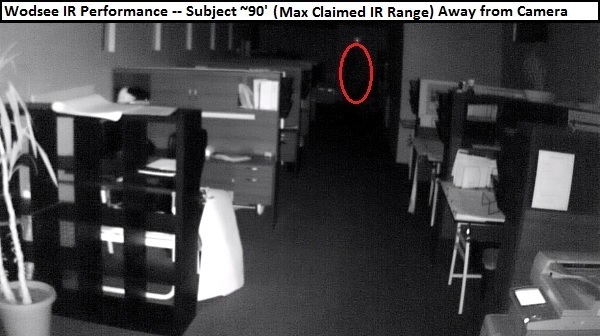 Both Wodsee cameras' IR patterns were much stronger in the center than at the edges of the FOV, as seen in this comparison. 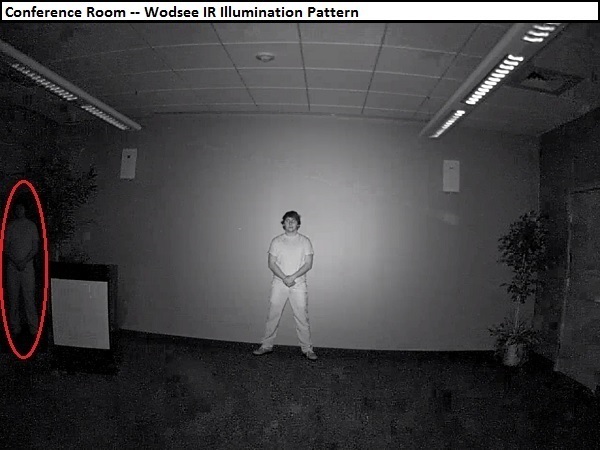 Both Wodsee cameras' bandwidth was lower in full light than both Dahua and Hikvision. The WIP100 was lower than the other cameras in low light with IR on, while the 130 was approximately the same as Dahua and Hikvision. Note that there is no user control of compression in Wodsee firmware. When analyzed, both cameras averaged about 25 on the quantization scale (which is relatively low compression - industry average is 27-30, higher compression levels).

Cameras were tested using default settings. These are the firmware versions used for this test:

Chinese Direct Disruptor Reolink Tested on May 31, 2017
Another Chinese disruptor, Reolink, is gaining attention. This one is...
Chinese Spam Access Control Is Here on Aug 04, 2016
Notorious spammers like Longse, Cantonk, and Wodsee have flooded the video...
Small Chinese Manufacturers at ISC West on Apr 20, 2015
There were ~100 small Chinese, Taiwanese and Korean vendors with tiny booths...
Super Low Cost Chinese Camera Shootout on Feb 25, 2015
The 'Chinese' are the industry's #1 threat (or opportunity depending on one's...
IP Camera Costs Comparison and Trends 2010 - 2014 on Jun 25, 2014
Over the past 4 years, the average price of 100+ IP cameras surveyed has...
Comments (39) : Subscribers only. Login. or Join.