A cube panoramic? Plus a wall mount facial camera? That's what Vivotek is proposing with its recent CC8130 camera.

That's certainly different from the legion of ceiling mounted minidomes that have become the industry norm (see our panoramic shootout results).

In this report, we share our test findings of Vivotek's CC8130 to see how it matches up. We did a shootout against 2 other panoramic cameras (another Vivotek and the new Brickcom Immervision one), the super wide angle 3MP Axis M30, as well as an ACTi conventional cube camera to get a full range of realistic alternatives.

The image sample below shows one test environment we used.

Given its wide, non distorted, coverage of a full area, its small form and low price, the Vivotek CC8130 is an interesting niche camera, as an alternative to traditional narrower FoV cameras and fisheye minidome ones.

The CC8130 is not recommended for covering wide areas where identifying details are required beyond 6-7'. Instead, higher resolution wide angle or panoramic cameras to capture these scenes.

Also, the camera is not recommended for mounting at traditional surveillance camera height of 10', 12', etc.

We have included a download link containing short demo videos of the Vivotek CC8130 in different scenes and lighting, such as our conference room and vestibule scenes. (23.8MB download): Vivotek CC8130 samples.

In this video, we review the physical construction of the CC8130. Key highlights include:

See our screencast overviewing the CC8130. Users should note the following:

Since the cameras in this test have vastly different fields of view, we've included this image for reference: 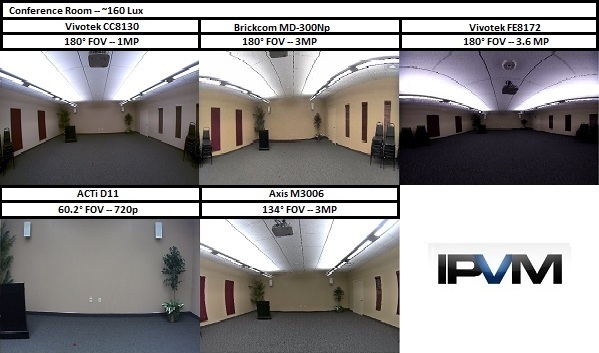 At 6 feet, the CC8130 performs well compared to the other 180° panoramic cameras. Lines 1-4 are distinguishable, as well as skin tone, hair style, facial expression and clothing.

At 12 feet, details and quality start to diminish, but our subject can still be identified, and line 1 on the chart is still readable.

At 18 feet, the CC8130's details captured decline, unsurprising given its 1MP resolution, lower than other cameras in this test. It becomes difficult to identify our subject and read line one on the chart at this range.

At 6 feet in dim lighting (~30 lux), the chart in the CC8130 provides details similar to full light.

At 12 feet, the chart in the CC8130 is hard to read, with only line 1 visible. The Vivotek FE8172's image begins to darken at this range, but details are still distinguishable.

At 18 feet, our subject details become difficult to discern. The ACTi D11 and Axis M3006 perform best in this scene, while Brickcom and the Vivotek FE8172 perform poorly as well. 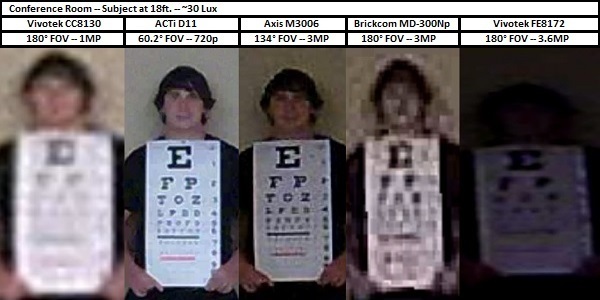 At 12 feet, detection and large details is still possible for all cameras, but the ACTi D11 is unable to detect our test subject, and can only view our eye chart, and the "E" on the chart.

At 18 feet at ~1 lux, only detection is possible. We cannot see our test subject in the ACTi D11, and the Brickcom MD-300Np is heavily impacted by artifacting and noise.

BLC On vs Off

Below are comparison images with BLC turned on and off, to show the benefits/tradeoffs of image quality. In our full light comparison, our subject is much brighter with BLC turned on, but at the expense of the bottom characters of our eye chart to appear washed-out. 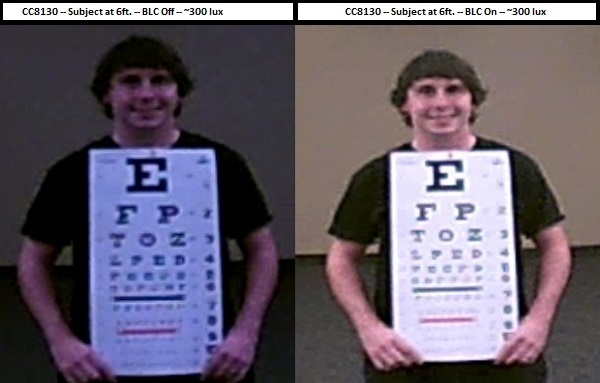 In a ~1 lux scene, BLC allows us to better distinguish our subject, and the first few lines on our eye chart are much more visible and sharp. The image also appears brighter and less noisy with BLC on. 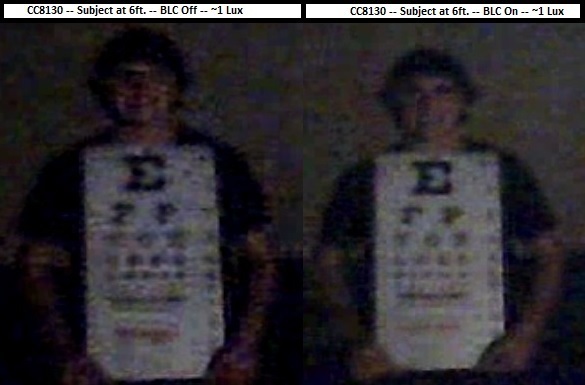 The scene below is used to emulate a checkout line at a grocery store or a bank teller line use-case scenario for the CC8130. At eye level (~6ft), our subject, which is ~2ft away from the camera, can be easily identified, and there is no added benefit for the 15° downwards tilt. Lighting is different in these scenes due to the amount of ceiling light being captured by the CC8130 in the no-tilt image, as compared to the tilted images.

In this scene, the CC8130 is mounted ~8ft high, and our subject is ~8ft away. The main difference here would be the amount of time our subject would remain on-camera as he walked towards it. The detail of our subject, however, remains unchanged at this distance, regardless of tilt. 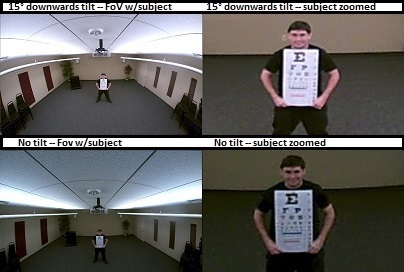 In the scene below, our test subject is ~2-3 feet away from the CC8130, which is mounted at ceiling height with the 15° downwards tilt. The main issue here is that recognition is difficult and identification is not possible, since we only see the top of our subject'a head, along with the wasted ceiling space taking up ~1/2 of the FOV. This is problematic for end users trying to "see more" subjects in a scene at once, thinking that mounting the camera higher will better the chances of finding someone in particular in a crowded scene.

Below are images of our test subject entering a building, swiping his card for entry, and about to leave the vestibule. We have included a side by side comparison to demonstrate a use-case scenario. The CC8130 is mounted at ~6 ft with no downwards tilt.

In this image, our subject enters the scene from the outside. Even with BLC on, we can clearly see what he is wearing, the color of his shirt, hair, and pants, and build. 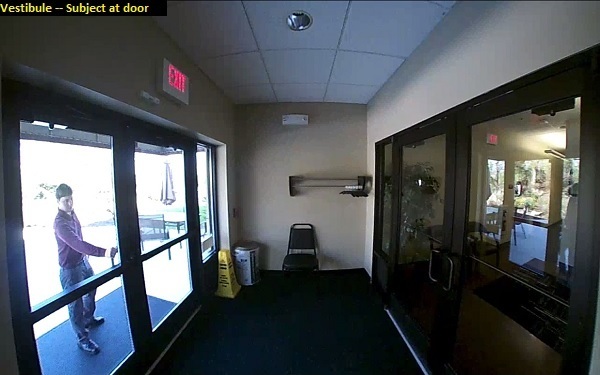 In this image, our subject is ~1 ft away from the camera when he swipes his badge for entry. Here, we can see our test subject in greater detail, even in a WDR scene. 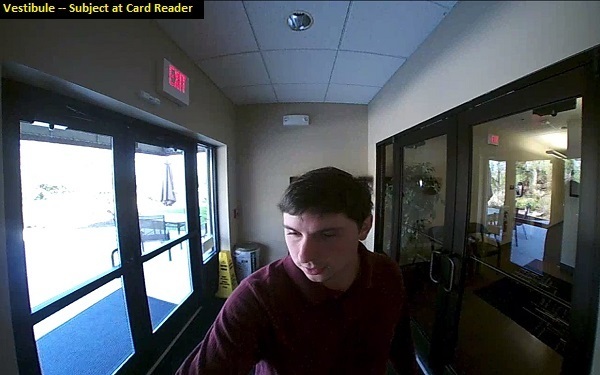 In this scene, we see our subject about to leave the vestibule to enter the building. If there was another person trying to tailgate into the building, the CC8130 would be able to detect or recognize them. 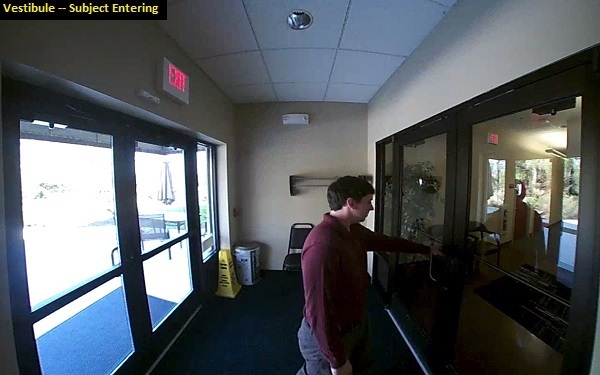 Below is a side by side comparison image containing the three above images.

The CC8130 defaults to 3Mbps CBR, but bitrate can be changed to VBR, or "fixed quality" in the web interface. Users can pick through defined quality levels or use a customized quantization level, and set a bitrate cap.

Due to the 180° FoV, large amounts of unused space (such as lighting fixtures) do little more than consume bandwidth, and users can apply a privacy zone to eliminate unused areas of the scene and save ~25-35% on bandwidth and storage. Cropping is not available for this camera.

In our conference room scene, bandwidth consumption was as follows:

Vivotek 3MP 180 Wall Mount Camera Tested (CC8370-HV) on Feb 28, 2017
Purpose-built wall mount panoramics have become an attractive niche to cover...
IP Camera Power Consumption Guide on Dec 24, 2014
How much power an IP camera consumes is important, especially since most PoE...
Mobotix Wedge Panoramic Camera on Dec 19, 2014
Mobotix was one of the first manufacturers with panoramic cameras. Since...
Calculating 180 and 360 Camera Coverage on Nov 11, 2014
The key challenge in designing and using 180 and 360 cameras is to determine...
Comments (2) : Subscribers only. Login. or Join.