In particular, Sony users historically needed to use their expensive high end V series cameras for these options.

Is this really the case?

However, lower cost manufacturers such as Hikvision and Samsung offer dome models at the EM600's price point and below, often at 1080p or 3MP resolution and frequently including integrated IR.

For those who prefer Sony, the E series offers performance equal to higher cost V series cameras at a much lower price point. Those who do not need the audio, I/O, or local storage of the V series should use these models whenever possible.

Versus competitors such as Axis and Panasonic, these E series domes are also competitive, at a lower price point. However, those in search of better value may find it with manufacturers such as Hikvision or Samsung, which offer similar domes at lower prices, or similar prices with higher resolution or built-in IR.

In this video, we outline the physical construction of the Sony SNC-EM600. Users should note the exclusion of audio, I/O, and SD card components and ports.

The SNC-EM600's web interface is predominantly the same as other 6th generation cameras, though absent are audio, I/O, and SD card options. WDR, low light, CODEC, and other settings are the same.

First, we began testing indoors in our conference room scene at various lux levels. Below is the FOV used for testing. 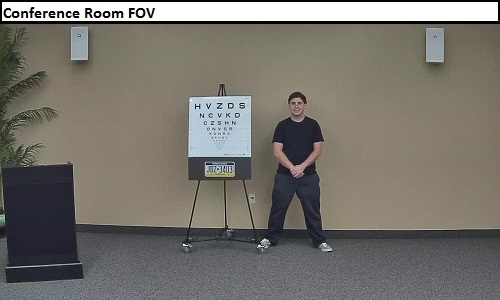 In full, even light, ~160 lux, the Sony SNC-EM600 performs without issue, with image quality very similar to the SNC-VB600. Our test subject is clearly visible and the chart is legible down to line 5. 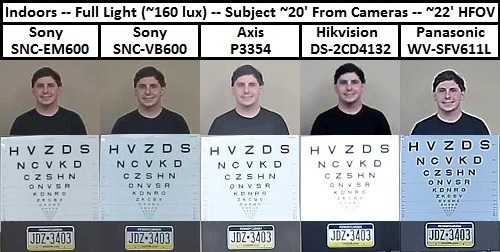 At less than 1 lux, details such as our subject's face and characters from line 2 and below on our test chart are unrecognizable on the Sony SNC-EM600. The integrated IR cameras, not surprisingly, produce clear images of the subject and test chart. 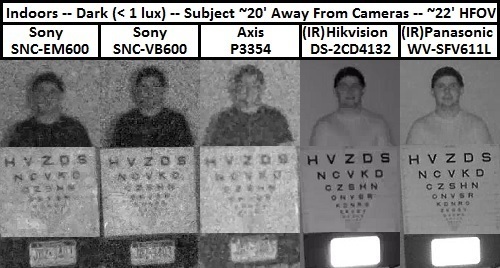 We tested the cameras' WDR performance in a warehouse scene against both strong backlighting from the sun outside as well and the dark area beside the open door. 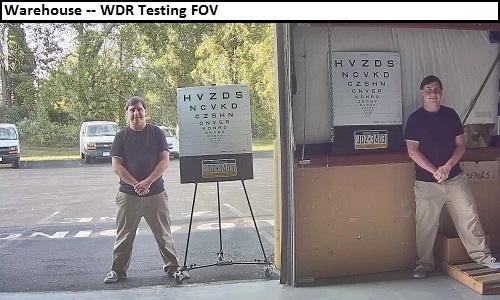 Again, the SNC-EM600 and SNC-VB600 are extremely similar, among the top performers in this test. Only the Panasonic WV-SFV611L provides slightly clearer images of the subject. 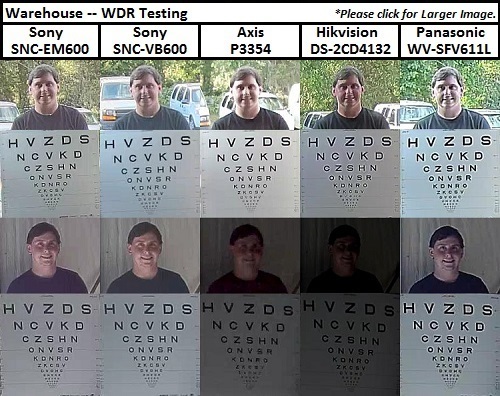 The SNC-EM600's bandwidth consumption was average, lower than the Axis P3354 but higher than the Hikvision and Panasonic models which include integrated IR. Again the Sony E series and V series offer similar performance.

These are the firmware versions used for each camera:

Fall 2014 New Products Directory on Sep 23, 2014
New releases are weak this year, and unfortunately, the trend does not appear...
Comments (1) : Subscribers only. Login. or Join.