A 10MP panoramic camera? While 3MP and even 5MP cameras are increasingly common, a 360 degree 10MP offering is rare. In this report, we share test results of Sentry360, a panoramic specialist, that offers 3MP, 5MP and 10MP panoramic cameras. We tested them side by side as shown in the image below:

The FullSight series prices out as follows:

The Mini Series is IP66 rated, while the Pro Series requires an additional housing for outdoor mounting.

If covering a very large area, especially evenly lit indoor applications, the higher resolution of the FS-IP10k may provide more extra details compared to lower resolution cameras. These gains are reduced as light lowers, where the FS-IP5000 outperforms it, and competitive cameras.

Compared to other panoramic cameras, the Sentry360 Pro Series performs well, while the Mini Series performed below average. However, both Pro cameras are priced above competitive models. For example, the FS-IP5000 has an estimated street price of about $1,300-1,400. By contrast, the Mobotix Q24 sells for ~$900 online, includes I/O, audio, and is IP66 rated, features not found in the FullSight series.

In this video, we review the form factor and physical features of both of Sentry360's panoramic lines. Key points include:

In this video, we review the Sentry360 Mini Series web interface. Users should especially note some camera defaults which should be adjusted:

We review the Pro Series web interface in this screencast. This web interface offers little in the way of configuration, with the following the main points of note:

Finally, this screencast reviews configuration and operation of Sentry360 cameras in the VMS, using Video Insight as an example. This video shows two key points:

In full light, around 160 lux, at 6' from the camera Sentry360's Pro Series 10 and 5 megapixel cameras show good details of the subject, including hair color, facial hair, and clothing, but the chart is difficult to read due to some overexposure. The 3MP model was one of the lowest resolution cameras in our test, and shows lines 1 and 2 of the chart, but the subject's face is difficult to identify. 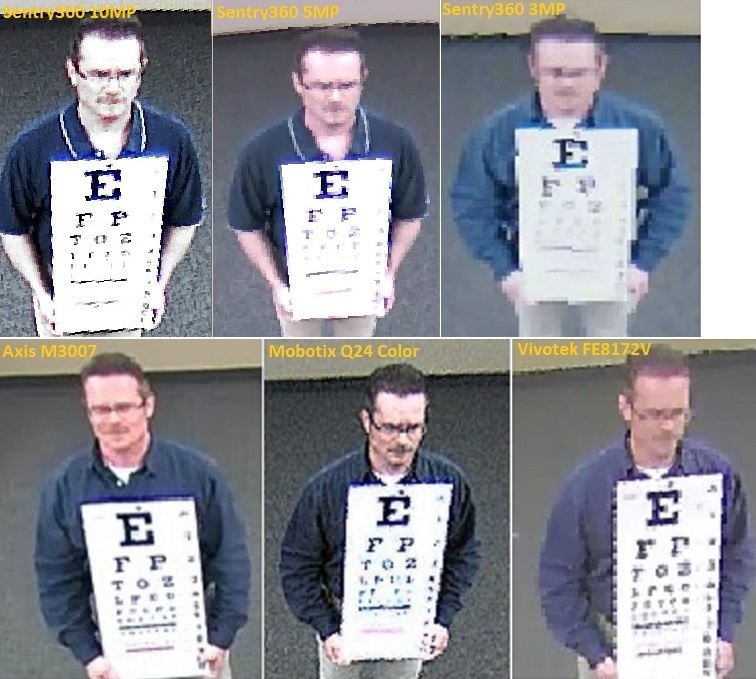 At our furthest tested range, 18', the 10MP FS-IP10K shows more details of the subject than all other cameras in our test. The 5MP model shows facial details on par with competitive models. All three Sentry360 cameras suffer from overexposure, however, makin the chart more difficult to read than in other cameras. 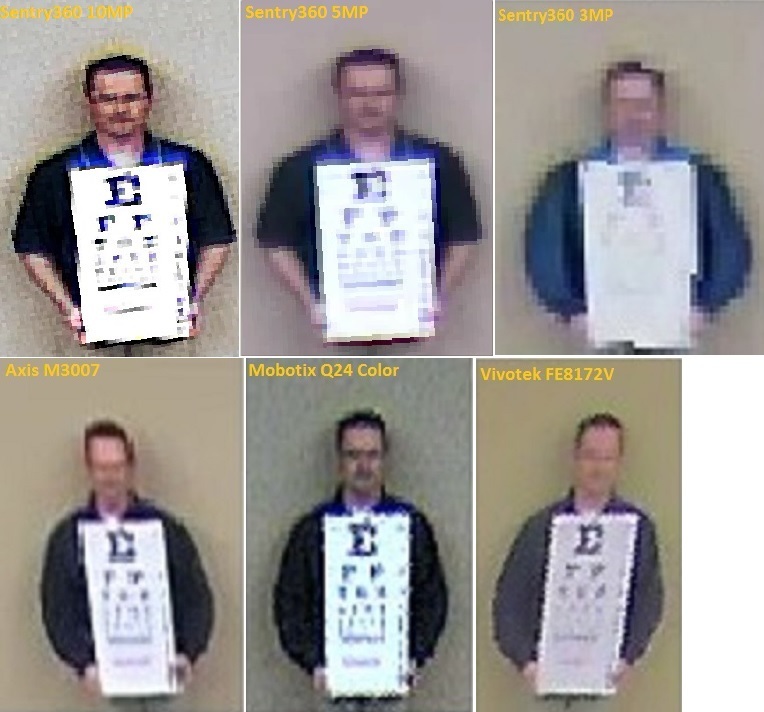 At much lower light levels, ~3 lux, the Sentry360 models begin to suffer from noise and dimmer images than other models. Details of the subject are still visible at 6'. The chart is more readable in the Pro cameras at this light level than full light, since overexposure is no longer an issue. 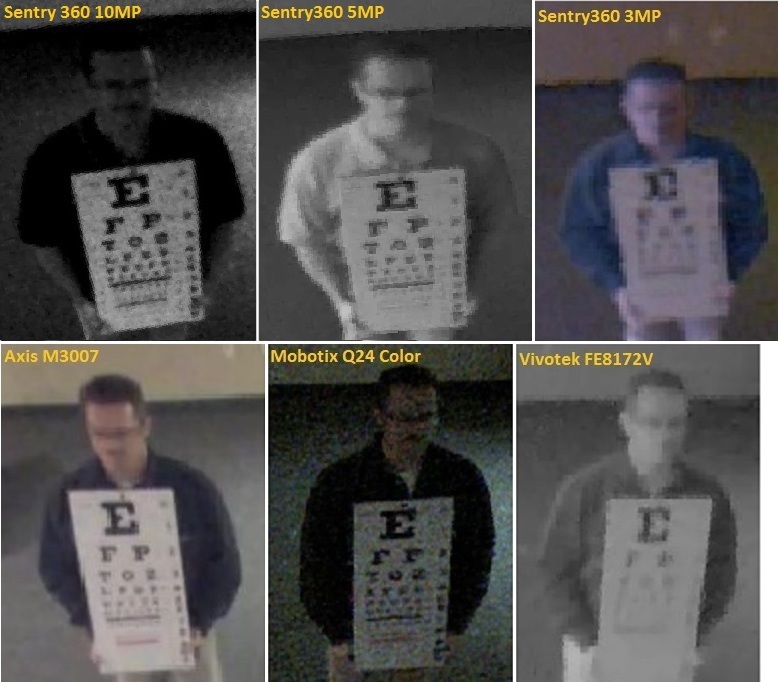 At 18', as in our full light comparison, the 10MP Sentry360 camera displays more details than competitive models. The 5MP model is on par with the Vivotek FE8172V, and slightly edged out by Axis and Mobotix. 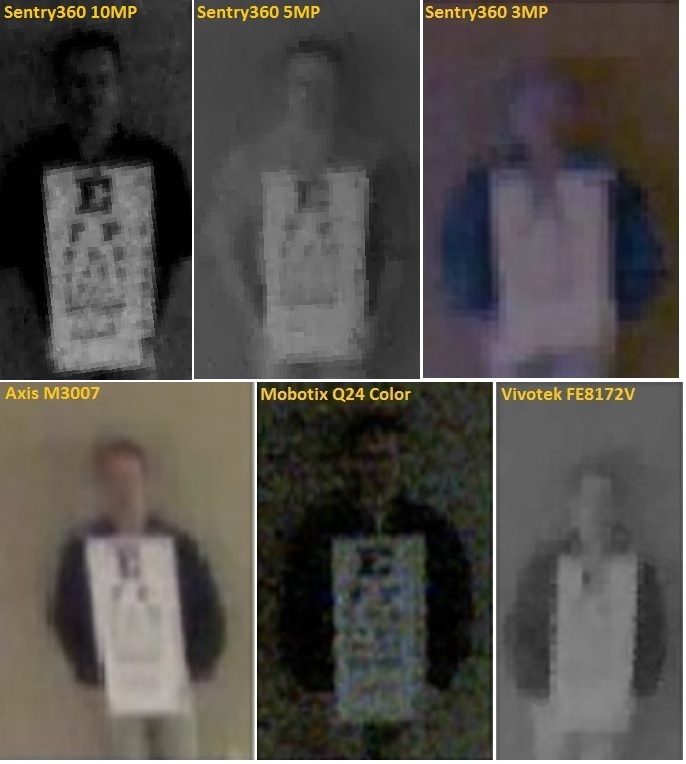 In very low light, below 1 lux, the 5MP Sentry360 is one of the top performers in our test. Though very noisy, the subject can be detected, and the chart seen. The 10MP and 3MP cameras produced no usable image. 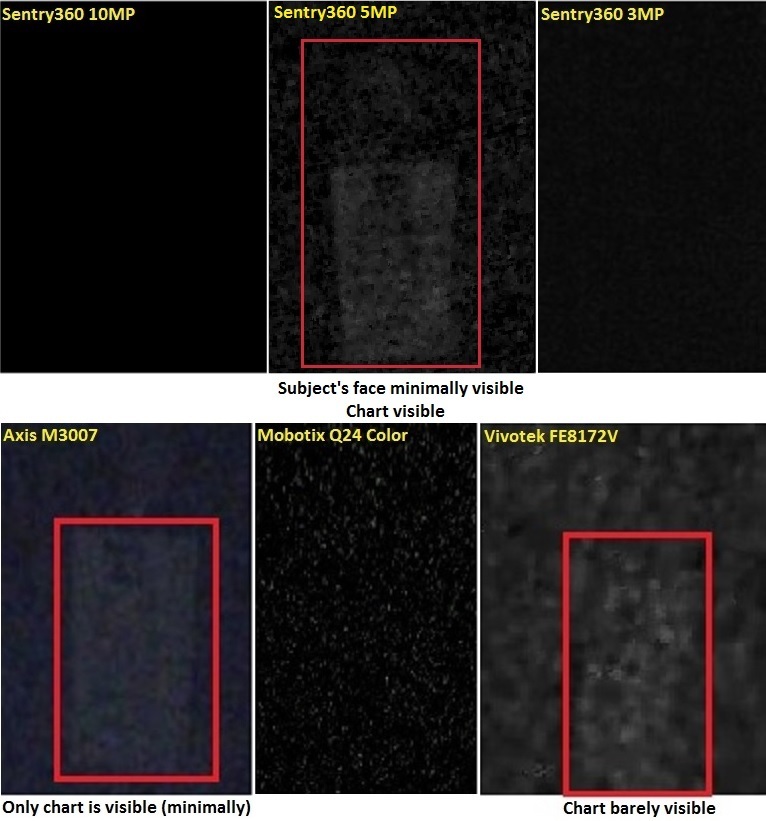