For years, Arecont Vision's SurroundVideo line has been practically the only multi-imager option, but with their poor reputation, multi-imager cameras are still not widely used.

Scallop Imaging aimed to change that with their D7 line, a 5-imager, 7MP camera with a unique form factor, recently updated with better low light sensitivity and improved frame rate. 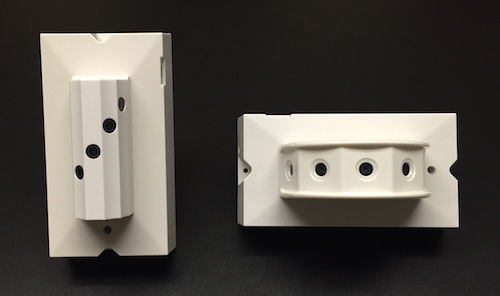 The Scallop cameras compare poorly to Arecont SurroundVideo, in terms of day and night image quality, frame rate, camera setup, VMS integration and price. Unfortunately, even with recent improvements, it does not provide a strong alternative.

The main advantage Scallop may have is its much smaller form factor which some may find more attractive and less obtrusive than standard cameras. Additionally, recess mounting and specialty finish options provide more options for blending the D7-180 into a user's environment.

The D7's form factor is relatively unique, most similar to a large cube camera, with options for surface and recess mounting. There are two models of D7 available, in vertical or horizontal orientation. The main difference is simply aesthetic, as both have the same number of imagers and performance specs.

In this video we review the physical construction of the Scallop D7 cameras, both vertical and horizontal oriented models.

One novel option which Scallop offers which most camera manufacturers do not is architectural finishes, made in various wood, metal, paint, stucco, block, etc. varieties. Users especially concerned with aesthetics may choose one of these to better blend in with their facility.

In the video below, we review configuration of the Scallop D7. There are several uncommon issues in the Scallop web interface, noted below:

Integration of the Scallop D7 [link no longer available] to VMSes varies, with all major VMSes listing some type of support. Some VMSes (Exacq, Milestone) integrated only via RTSP streams, while others, such as Milestone XProtect include direct drivers. Note that some VMS integrations, most notably Genetec, are limited to only the HD stream with no access to the full 7 MP stream.

No issues were seen in Milestone XProtect even using default settings.

Note: these droppages were not simply due to the server being unable to handle throughput of streams this large (18-20 Mb/s). With only the full 3 FPS stream connected, CPU usage never exceeded 5%, and network utilization remained low (using 1 Gbps links).

In full light, at close range (~8' from camera/~90 PPF), the D7-180XR performs well, with better contrast and subject details than the Arecont AV12176DN, as well as either fisheye panoramic model. 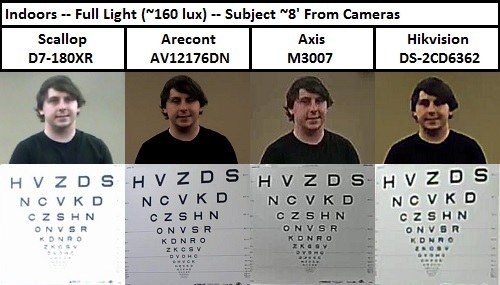 Moving away from the camera, to about 24', PPF drops to about 34 in the D7-180XR, with details reduced and the chart legible only to line 2, with some of 3 partially legible. Details are moderately better than the Axis and Hikvision fisheye models, though substantially worse than the Arecont SurroundVideo. 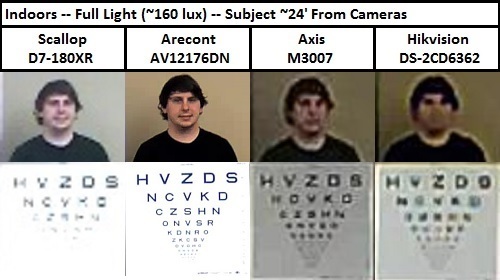 In low light, ~1 lux, the Scallop camera produces few usable details of our human subject, performing worse than the Axis M3007, which clearly shows details of his clothing and hair. Again the AV12176DN performs best. 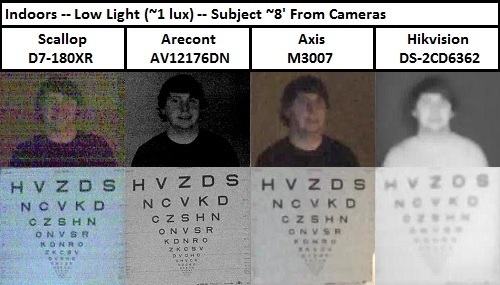 Finally, at about 24' in low light, only the Arecont SurroundVideo camera shows any legible chart lines and some details of the subject. 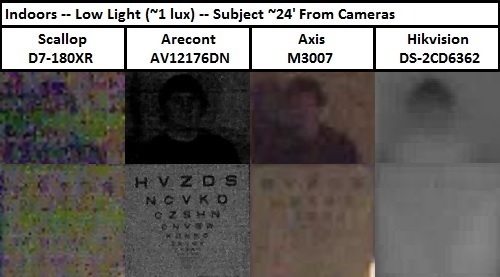 The D7-180XR had some of the highest bitrates in our test, especially in full light, where it was nearly 7x the bandwidth of the higher resolution AV12176DN. In low light, bitrates were comparable to the SurroundVideo model, though far higher than either fisheye panoramic.

Pelco Optera Multi-Imager Cameras Overview on Apr 07, 2015
2015 looks to be the year multi-imager goes mainstream. Pelco is one of a...
Comments (5) : Subscribers only. Login. or Join.