In order to test these claims, we shot out 1MP and 3MP SureVision 2.0 models, the IME119 and IME 319, against other top performing low light and WDR cameras, from Axis, Bosch, Samsung, and Sony.

Here is a preview of the side by side WDR comparison:

Pricing on the SureVision 2.0 is as follows:

These prices are well above many options, such as Samsung and Hikvision, whose indoor domes sell for ~$485 online and ~$420 online, respectively. However, compared to options from Axis and Sony (both about $850 online), Pelco's SureVision 2.0 models are priced approximately the same.

In this video, we review the physical construction of the SureVision 2.0 domes:

As well as SureVision 2.0 box cameras:

This screencast reviews the web interface of the SureVision 2.0 camera, largely unchanged from previous Pelco cameras.

To see performance differences between first generation SureVision cameras and the new SureVision 2.0, we tested the IME119 against the IXE10LW. Both low light and WDR performance are notably improved, seen in the following comparisons. 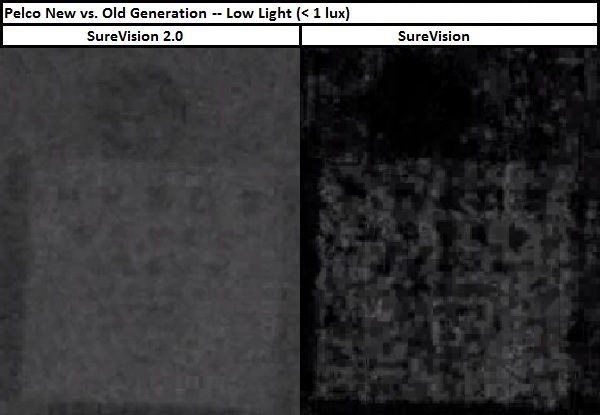 WDR performance is moderately improved, with better visibility in both light and dark areas in the 2.0 IME119. 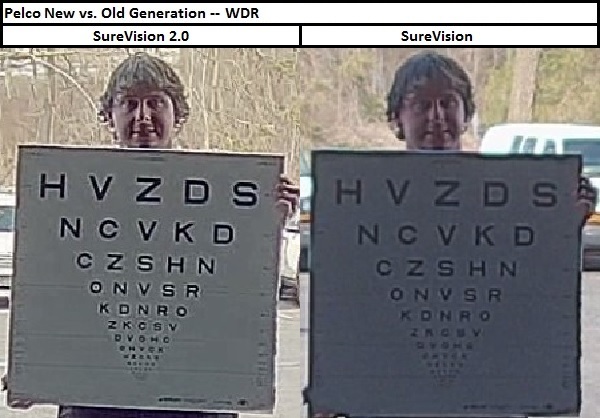 We tested the IME119 and IME319 against other current generation 720p and 1080p low light cameras in an indoor conference room, below 1 lux.

The IME119 lagged compared to other 720p low light cameras, with dimmer images and lower contrast, providing overall fewer details of our subject and chart.

The IME319 fared better compared to other 1080p cameras, with relatively less noise than competitive options, though slightly dimmer images.

We tested the cameras against an open overhead door to check WDR performance.

The IME119 was one of the top performers in this scene, with better details of our subject and more legible lines on the test chart.

In the dark area next to the door, the IME119 is again strong, though slightly behind the Axis Q1604 and Sony SNC-VB600.

The IME319 is the top 1080p performer in this scene, again with better details than other cameras.

And in the dark area beside the door, the IME319 again outperforms all other cameras in the test.

Neither the IME119 nor IME319 displayed any imaging issues in full light, seen in the comparisons below.

We tested both Pelco cameras with our ISO 12233 chart to check TVL performance in full light and low light. 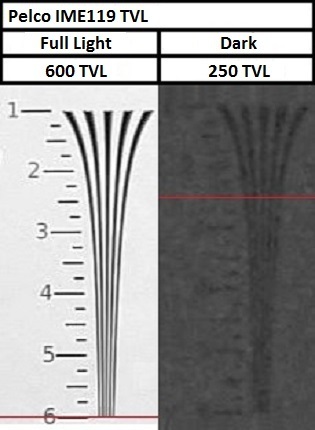 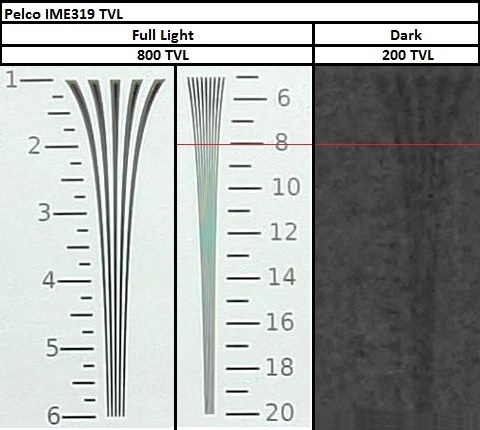 Pelco SureVision 2.0 cameras have no means to directly set compression level, such as low/medium/high or numerical scales typically found in other cameras. Instead the camera manages compression automatically. Analyzing video streams, we found that using CVBR, compression averaged about 27-28 on the quantization scale.

Note that when using VBR encoding, a "target" bitrate setting is used, which sets a minimum bitrate the camera will use. Depending on scene complexity, bandwidth may exceed this setting, but it will never be lower, as is typical in most VBR implementations. Due to this target setting and resulting higher bitrate, we found quantization very low (~18) using default settings in full light.

Standardized to 10 FPS, ~28 Q, both Pelco cameras had some of the lowest bandwidth consumption in our tests, lowest among 720p cameras and second lowest among 1080p, bested only by the Bosch NBN-932V.

All cameras were tested using default settings, except for shutter speed, which was set to 1/30s maximum. WDR was manually turned off for low light cameras in those models which do not automatically turn it off.