Undoutedbly, Pelco was a leader in analog CCTV. Years ago, integrators would have likely choosen Pelco as the most respected company in the industy. Yet times have changed.

In the last decade, with a sharply shifting industry and a company in transition, Pelco's prominence in the market has clearly fallen. During that time, Pelco was acquired by international conglomerate Schneider Electric while IP camera adoption has surged. Equally troubling, Pelco's initial efforts into IP have not been especially impressive and many, including us, have been disappointed with their existing offerings.

Starting in 2011, Pelco refocused its efforts on a new IP cameras technology called SureVision [link no longer available] humbly calling it a "revolutionary approach to video security", a "new era of image quality" that "set the bar for best image quality." Specifically, Pelco claims that SureVision "combines Wide Dynamic Range along with Low Light and Anti-Bloom capabilities into one highly intelligent technology." Suffice to say, Pelco is going all out on this one.

Given the (self) hype, we decided to test SureVision against previous generation Pelco cameras and some of the best existing cameras in the industry. From Pelco, we tested the 1.2MP SureVision camera (IXE10LW) [link no longer available] and the previous generation IXE20DN [link no longer available]. We tested them against leading performers from Axis, Bosch and Sony.

Here are our key findings from the Pelco Sarix test:

The Pelco SureVision 1.2MP camera should be considered among the top tier of megapixel cameras. With a fairly reasonable price point (~$750 w/o lens) and strong WDR plus low light performance, it is a strong all around performer. However, given the potential image artificating, usability concerns and streaming limitations, some users may find issues in using this camera.

We saw a number of potential usability problems in the configuration and use of the Sarix cameras. Here they are:

The video shows these elements in action. I strongly recommend you watch to better appreciate:

Our first image comparison is between the two Pelco cameras tested. Pretty much, you can see in each comparison that the Surevision 1.2MP delivers superior image quality to the IXE 2MP: 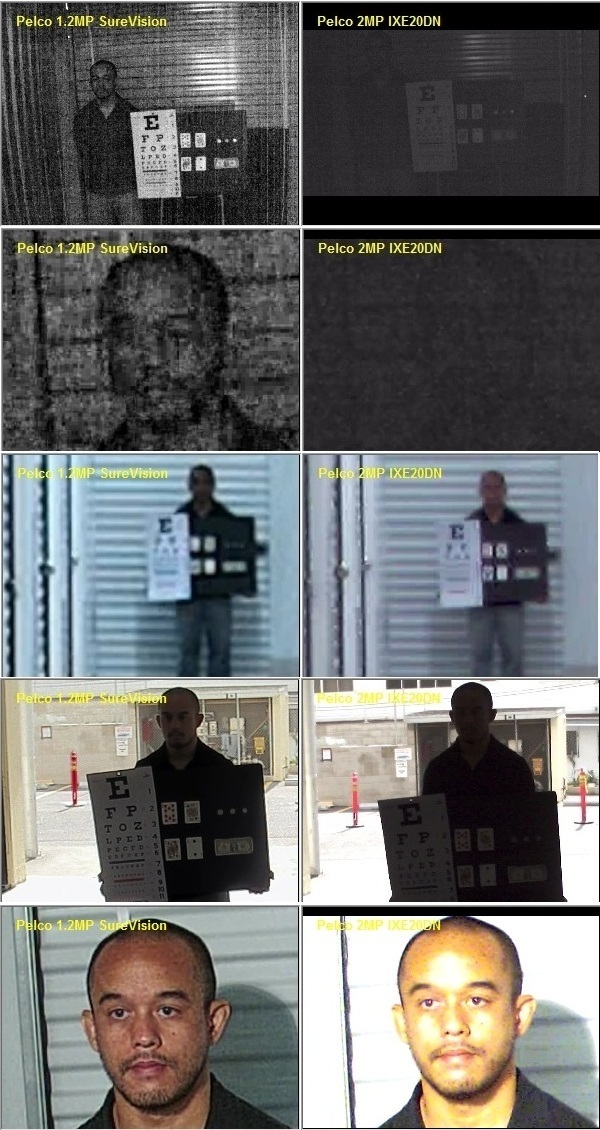 The last image comparison in the bottom demonstrates a weird issue with the IXE model we saw continuously. When faced with even moderately bright direct lighting, the IXE tended to be oversaturated.

In the first of the group comparison, we show a full screen view in low light conditions: 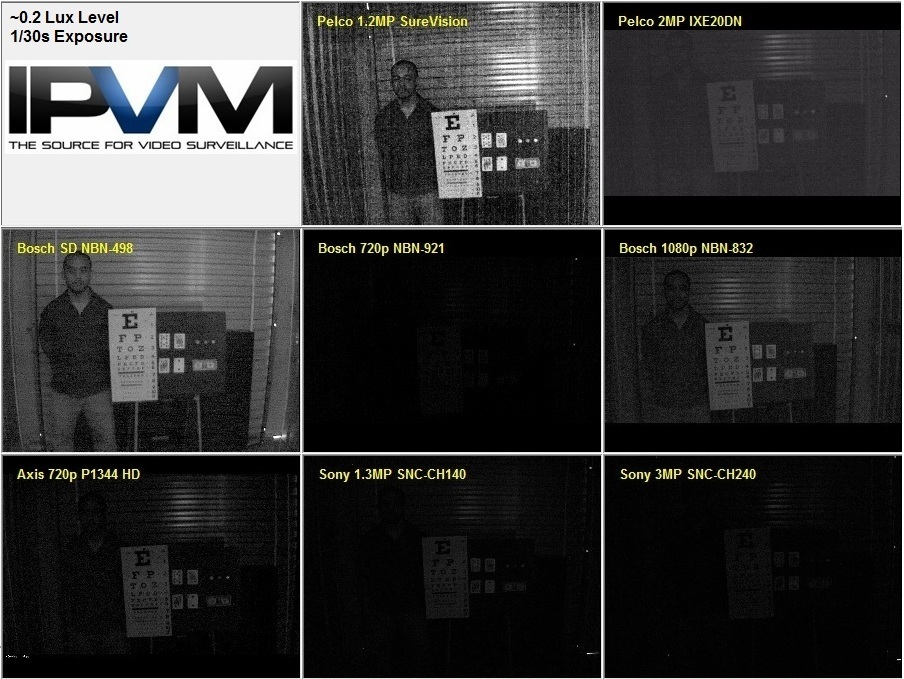 The main thing that strikes us is how bright the Surevision camera was. It is brighter than the Bosch SD camera in some sections of the image.

However, the advantages are not as significant when we digitally zoom into the subject's faces: 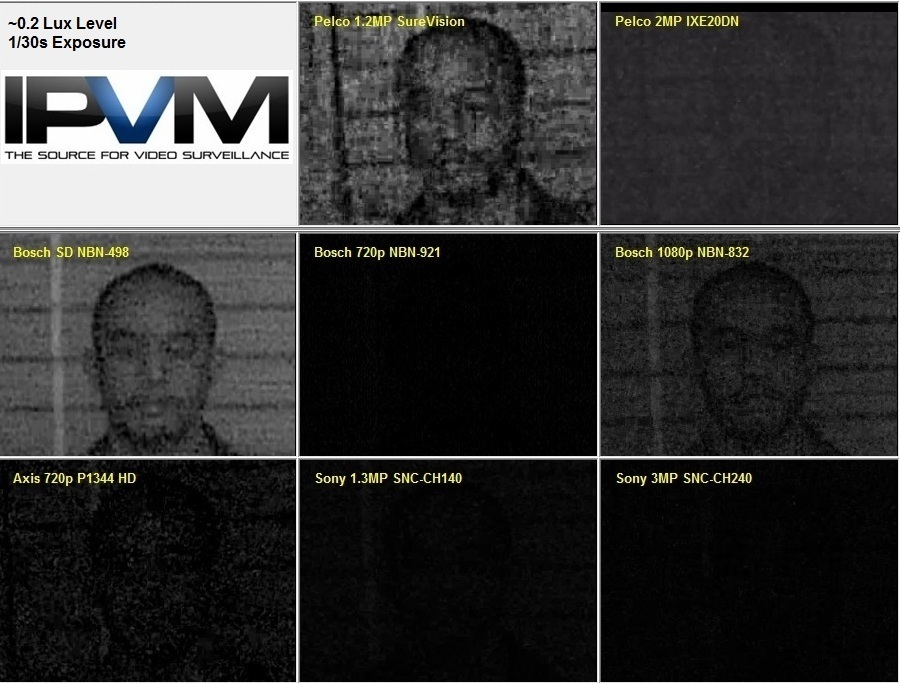 When looking up close, the increased digital noise of the Surevision camera obstructs viewing facial details, allowing the Bosch SD and 1080p to deliver slightly more details. That noted, the Surevision still captured more details than any of the other megapixel cameras.

In this scene, we had a subject 80 feet away from the camera at an ~80 foot wide FoV: 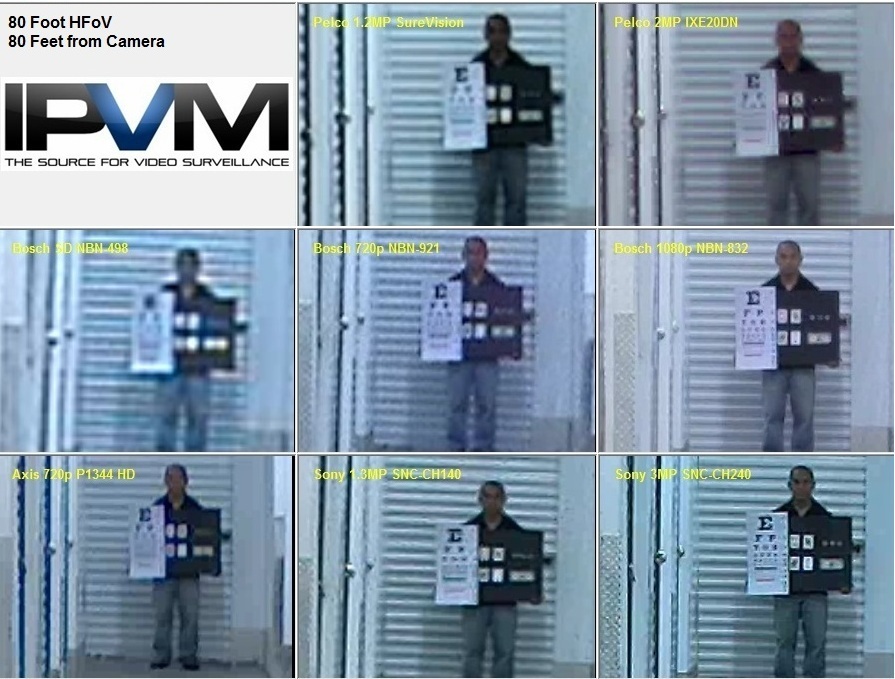 This is the one scene where the Pelco IXE 2MP is slightly better than the Surevision. However, both the Pelcos are in line with the performance of the 720p cameras in the group but behind that of the 1080p Bosch and the 3MP Sony.

Here we have a WDR scene in a narrow field of view / dark region: 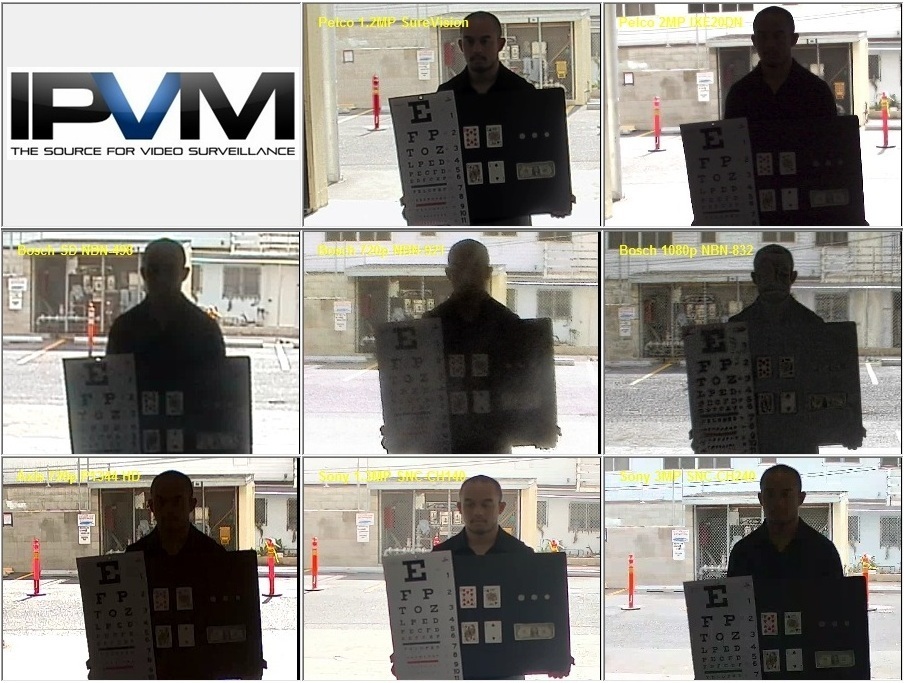 The Surevision does quite well with only the Sony CH140, the 'winner' of our previous WDR shootout in the same performance level.

Here we have our subject move farther back in a brighter region at a wider FoV delivering similar performance as the first scene: 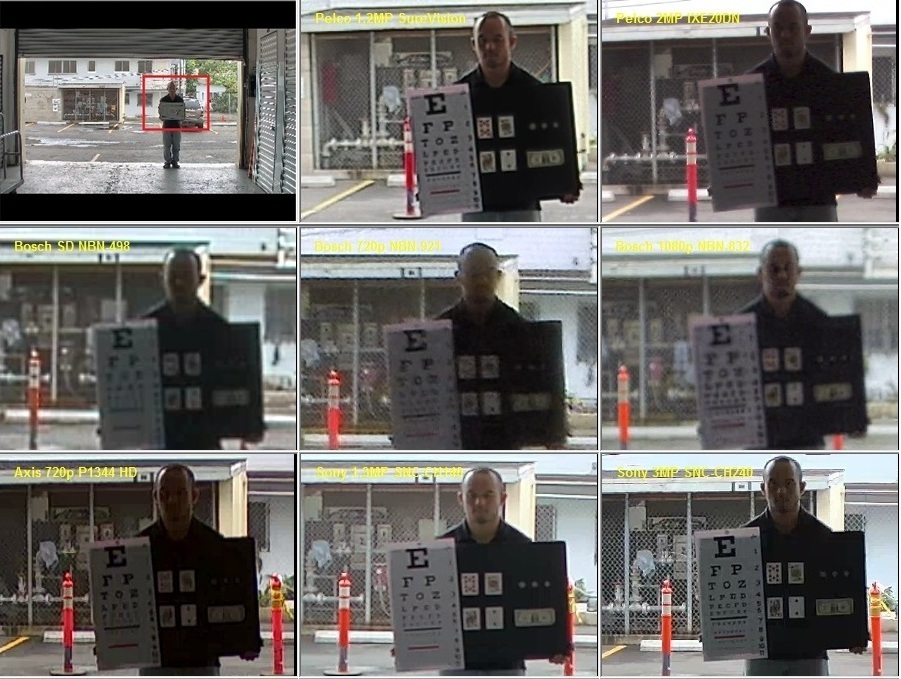 In the final section of this report, we look at some image quality artifacts that we have seen periodically with the Surevision camera. The patten we saw is that the artifacts are most significant when dealing with bright light sources (like lamps or headlights) or when lighting levels change rapidly.

The images below show some examples of outdoor night image quality. 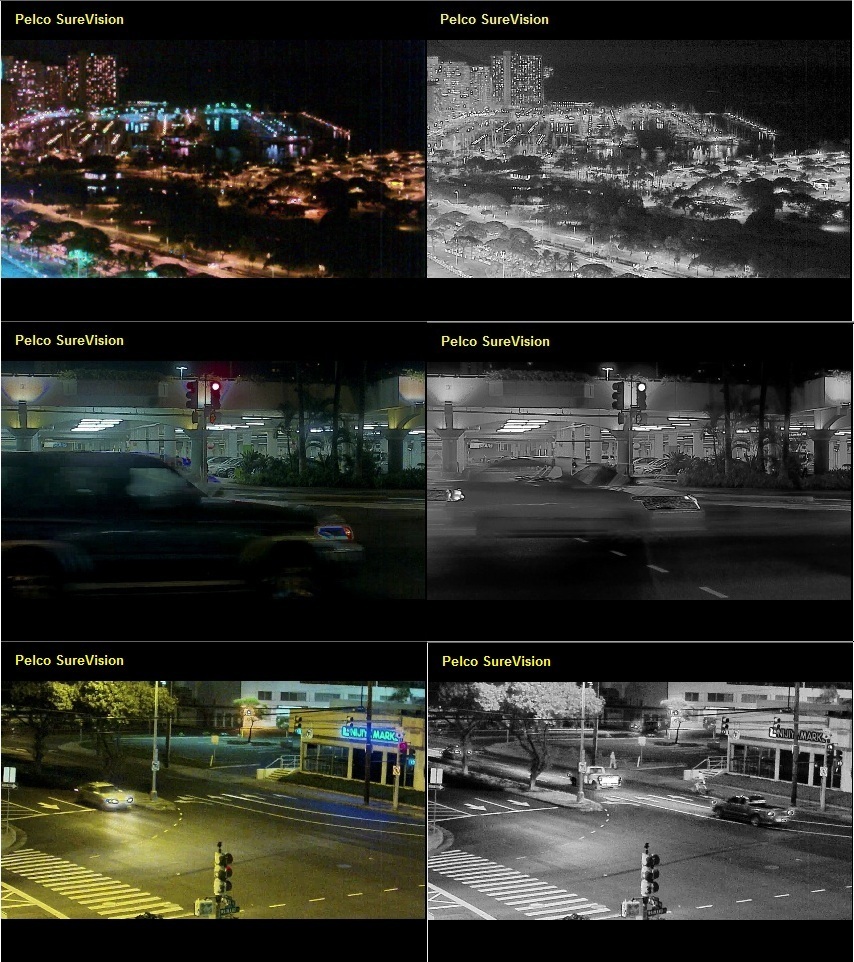 The last row is likely the most representative of an outdoor shot. Here we avoided street lights and had an angle of incident that did not allow vehicle headlights to shine into the camera directly. While you see some artificating on the sign and the headlights, overall it's quite modest.

Here is a video that shows some of the issues we saw in action. This is worst case scenario and represents an uncommon camera setup with the camera directed straight on to oncoming traffic. This does capture some potential issues to be aware of:

Pelco Sarix SureVision Examined on Sep 19, 2011
In this note, we examine Pelco's announcement of SureVision [link no longer...
Comments : Subscribers only. Login. or Join.