Megapixel analog sounds like a contradiction in terms. 'Analog' by definition, or at least in common use, is constrained by 60+ year old NTSC / PAL specifications and cannot be 'megapixel.'

However, now manufacturers are starting to incorporate megapixel sensors into analog cameras. While the cameras must output NTSC / PAL analog, the imagers are capturing megapixel.

Many argue that this is nonsense, that there can be no image improvements and that it is simply manipulative marketing.

900TVL cameras delivered a clear improvement in image quality compared to all of the other analog cameras.

Questions we examine inside, with image comparisons:

The big challenge in deciding what to do is that 'megapixel analog' requires both new cameras (i.e., 900 TVL / 1.3MP sensor ones) and new recorders (960H) to deliver the potential quality improvements.

If each camera is only going to cover a narrow FoV of 10 feet or less, with a low camera count and simple needs, 900TVL looks to be a better choice than IP MP and a meaningful upgrade over moderately less expensive traditional camera counts.

For reference, this image illustrates the approximate 18' FOV for all cameras. 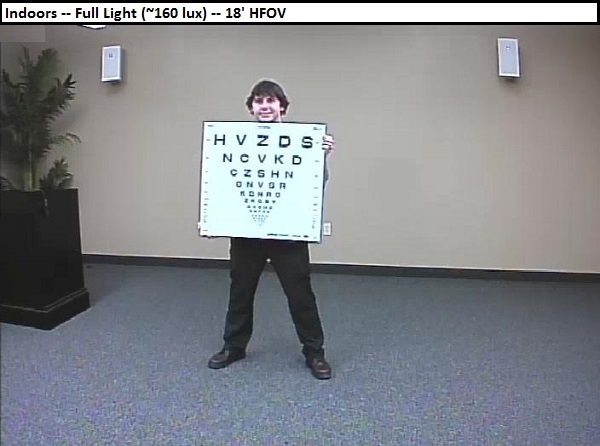 In a dark scene, with IR on, the 900 TVL analog camera is top performer against the 600 TVL and 960H/700TVL, with low amounts of visible gain and artifacting present, while being able to discern line 4 of our test chart. Both the 600 TVL and 960H/700TVL cameras have high amounts of artifacting present, and the 960H/TVL appears to wash out our test chart with IR illumination.

Next, we comparing the "mega pixel" (900 TVL) analog camera to a 720p and 1080p IP camera, and take note of the difference between them, if present.

We moved onto testing the top analog performer (900 TVL) to a 720p and 1080p IP camera. Although performance is good on the 900 TVL analog camera, it does not surpass the 720p or 1080p cameras, which can distinguish characters on lines 6-7 of our test chart.

The same is true in low light with IR on, with both HD cameras providing more detail:

In the comparison below, past line 3 in the D1 DVR image is illegible, and our subjects face is clearly more pixelated. 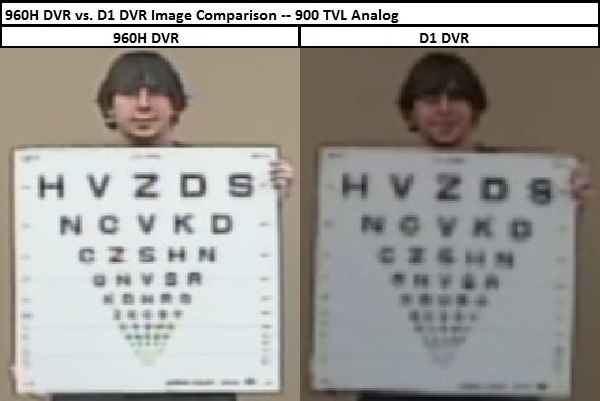 Finally, we took the cameras outside, allowing for a larger testing FOV. Below is the FOV we used for testing. 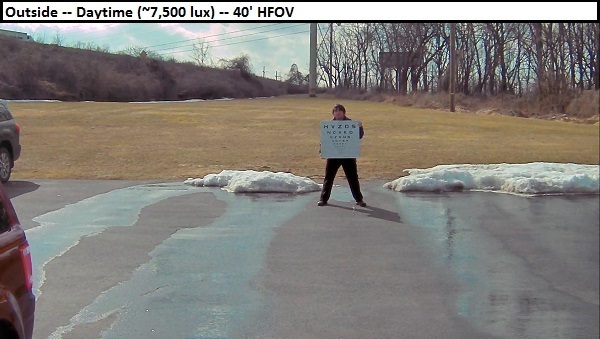 With a 40' horizontal field of view, images from both analog cameras are pixelated and noisy. However, the 900 TVL camera is able to distinguish our subject face and a few characters on our test chart more than the 960H/700TVL camera. 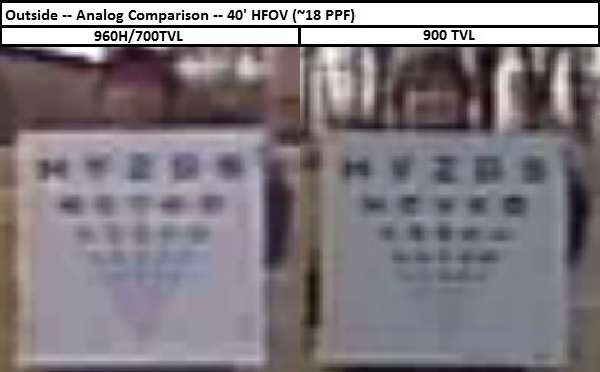 Similar to our indoor scene, the 720p and 1080p clearly perform stronger than the 900 TVL analog camera, with our subject's face and lines 2-3 on our test chart more visible.

Walking across the scene, our subject's profile in the 900 TVL image has strong artifacting, and it is difficult to obtain any useful details, such as clothing or hairstyle. 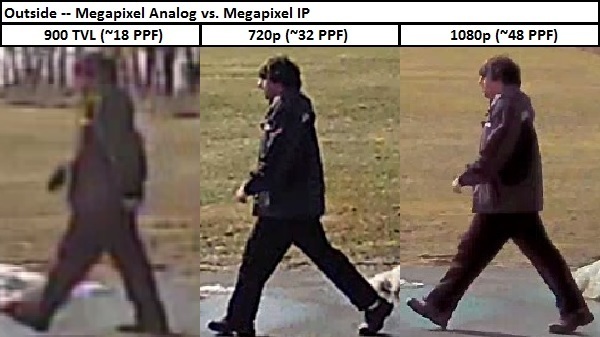 With our subject walking towards the cameras, the 900 TVL camera still has difficulty producing a clear image of our subject, while the 720p and 1080p cameras can identify few facial features and apparel detail (such as the grey stripe on our subjects jacket). 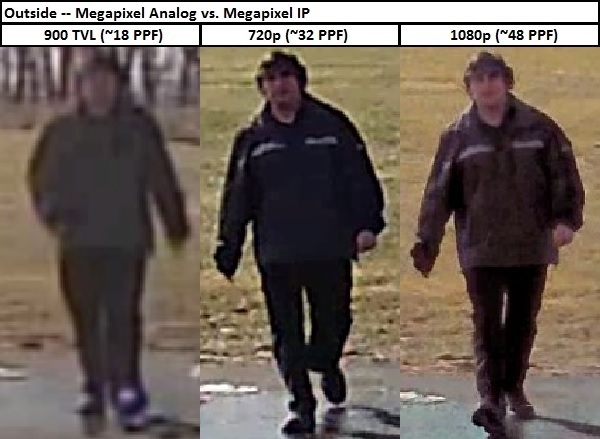 We tested bandwidth in both full light and dark scenes with IR on. The chart below compares bandwidth consumption on all cameras. We gauged bandwidth for the analog cameras based off the RTSP stream bit rate from the QT524 4-channel 960H DVR to Exacq. A Q of 28 was used for all cameras, with FPS set to 10. Measurements are based off Mb/s.

For those interested, we have compiled the entirety of the analog and megapixel shootouts into one. In full light: 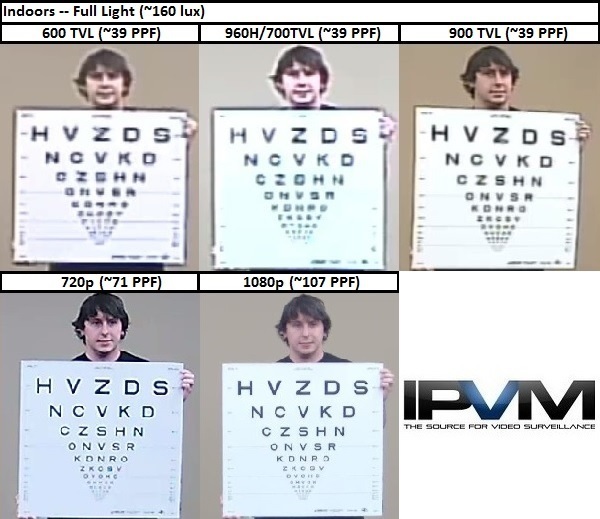 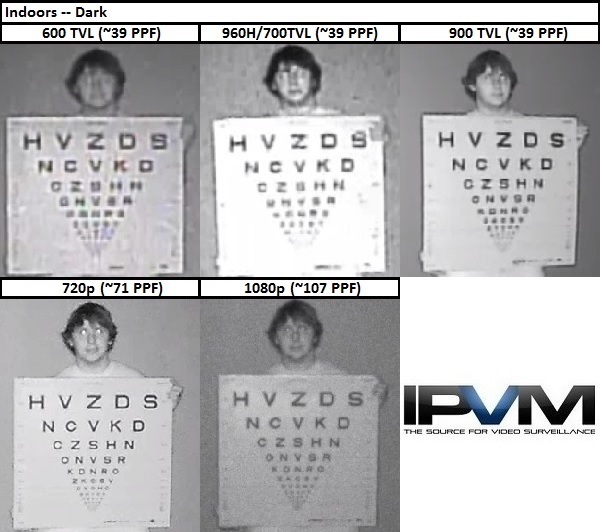 These are the camera models used in this test:

Axis vs Hikvision vs Sony Encoder Test on Mar 18, 2015
In this report, we share test findings of three popular four port analog SD...
The Worst HD Quality Camera Ever (Samsung 1280H) on Oct 15, 2014
Samsung, what are you doing? Their new 1280H offering significantly...
Comments (34) : Subscribers only. Login. or Join.