March Networks has been one of the bigger names in video surveillance recorders for a decade, with significant adoption especially in banking and retail.

For a number of years, since the Cieffe acquisition, the company has offered IP cameras as well.

MSRP pricing for the MegaPX MicroDome is $915 USD, while the MiniDome Z has a price of $695. The online price of these cameras is relatively close to MSRP:

However, given March's limited availability and traditional security manufacturer (deeper) discount structure, dealers might be able to command higher markups or offer lower pricing than that.

Strictly on online pricing, March's cameras pricing is less than many but not all bigger brands:

The same is true of the MicroDome, which falls below average among outdoor 1080p models:

Overall, these March cameras are moderately below comparables at moderately lower costs. They also come with greater difficulty of 3rd party VMS integration (due to the older ONVIF version and limited direct integrations).

Their best fit may in March end to end solutions with March's own VMS / recorders.

In this video we review the physical components of both the MicroDome and MiniDome Z.

This video shows the size of both cameras compared to common indoor and outdoor options. The MicroDome is notably smaller than other outdoor options, such as the Panasonic 6 series shown here.

In this video we review configuration options for both March cameras.

First, we began with full light tests in our indoor conference room, ~160 lux, seen in the field of view below. 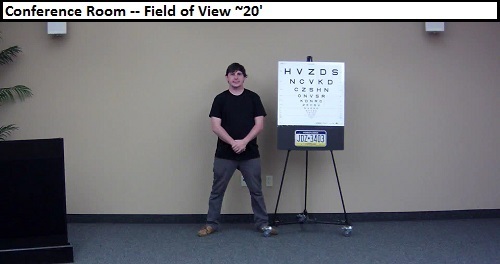 The March MicroDome performed modestly better than the MiniDome in this scene, with truer color and clearer images, while the MiniDome was dimmer, slightly dull looking. 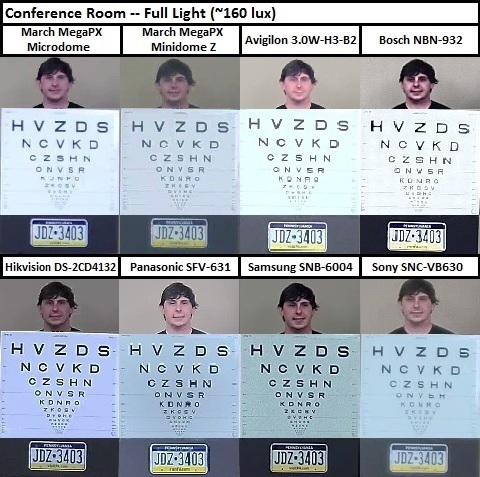 In the dark, ~1 lux, neither March camera produces a usable image of our test subject, nor did the Avigilon, Bosch, or Sony cameras. However, the chart is legible to line 3/4, despite increased visible noise, and the license plate visible in the MicroDome. The Hikvision DS-2CD4132 and Panasonic SFV631L are included to show the performance gap between these cameras and those including integrated IR, an accelerating trend. 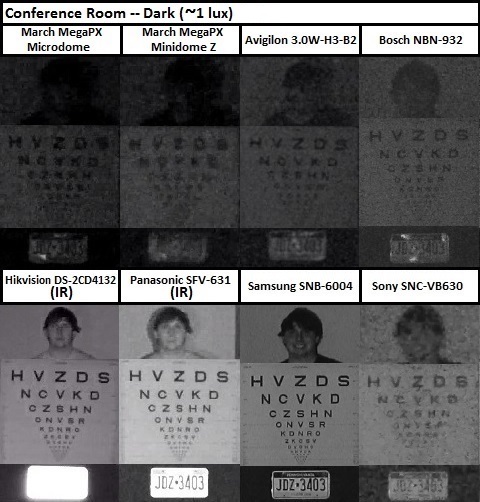 We moved the cameras to our warehouse test scene, shooting our subject against both the strong backlight in front of and shadowed area next to the open door. 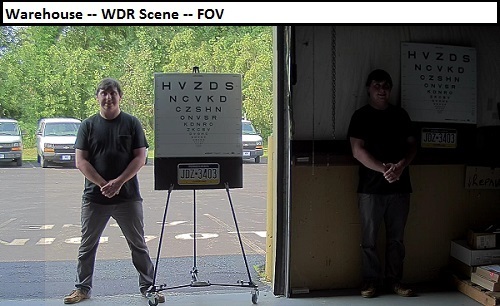 Both March cameras default to the "Auto" WDR setting. We found that this was significantly outperformed by the "High" setting.

In the image comparison below we can see the difference between High, on the left, and Auto, on the right, with far more detail of our subject's features and the test chart in the images using High. 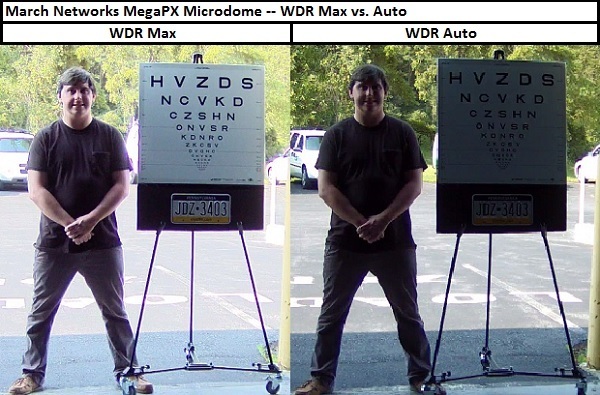 Beware, going from 'auto' to 'max' seems to lengthen the exposure, improving the lighting / clarity of the nearer darker subjects but oversaturating the leaves and the cars in the background. This could be a problem in some scenes.

For our comparisons, both March cameras were turned to 'max'.

In the darker area beside the door, the MiniDome outperforms the MicroDome, with better visibility of the subject and test chart. Both are outperformed by competitive cameras from Avigilon, Hikvision, Panasonic, and Sony. 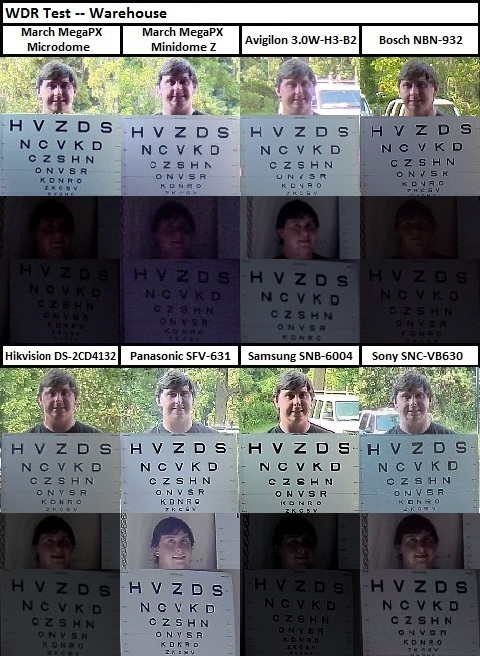 In low light, both cameras consume more bandwidth than average, with only the Bosch NBN-932V running in the same range as the March MiniDome. In full light, the MicroDome's bitrate is below average, among the lowest in the scene. However, at over 2 Mb/s, the MiniDome is more than double most tested cameras.

These are the firmware versions used in each cameras: