In our test of Dahua's HDCVI, several members asked how well the HD-over-coax technology functions over UTP. Though the vast majority of existing analog deployments use coaxial cables, quite a few use UTP for increased distance or higher density cabling. So the question is, can these deployments upgrade to HDCVI without recabling?

The answer is: it works, with limitations. In this note, we connect an HDCVI PTZ to a DVR using various lengths of UTP to show these differences.

In this video we connect an HDCVI PTZ to the DVR over 1,000' of Cat 5e using a balun at either end. Baluns used were Muxlab 500024 [link no longer available], a low cost model (~$20 USD online) which uses one pair for video, typical in many UTP CCTV deployments. The camera streams video near instantaneously, as was the case when using coax, and PTZ controls function similarly.

While cameras connect and function normally over UTP, some degradation was visible depending on distance.

Comparing 1,000' of coax against the same length of Cat 5e cable, for example, we can see slight smearing of the image running over UTP, seen in the image below. Since Cat 5e is generally not shielded, the crosstalk effects of the spooled cable are far greater than what is seen when using coax. While spooled cable is a harsh example, users with large quantities of bundled cables may experience similar issues. 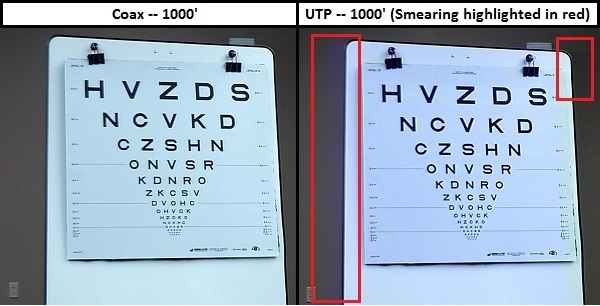 Reducing UTP length to 500', these effects are no longer present, with video looking essentially the same as it did over coax (though with slightly different coloration). Cables shorter than this had no issues. 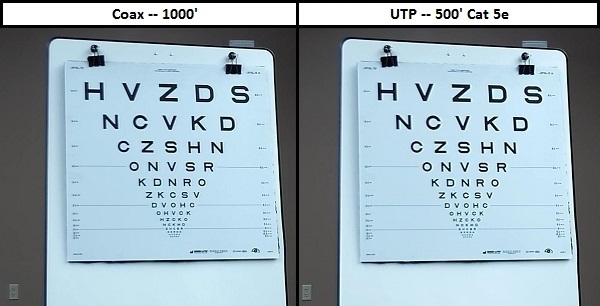 In many existing CCTV deployments using UTP, HDCVI will likely work properly using low cost baluns. However, we recommend testing these cameras in place first, especially in large deployments with many long-distance cable runs and large quantities of cables to check the effects of crosstalk on video.