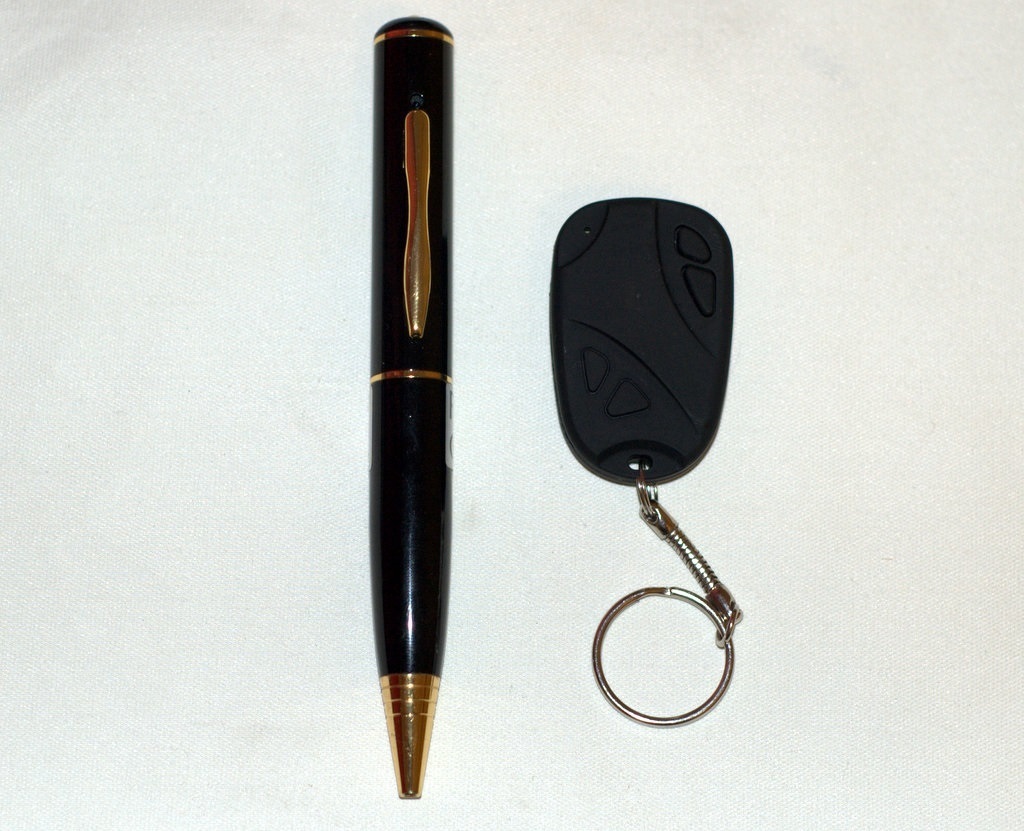 We then put them to the test, examining video performance in low light, WDR and evenly lit scenes. Plus, we investigated the usability of each device.

Both devices 'worked' without really much troubleshooting or complexity. The PenCam's video quality is roughly equivalent to a budget HD camera but its fairly large size (for a pen) made it difficult to position and drew attention to its presence. By contrast, the car key cam was unobtrusive but needed to be held up (or propped) awkwardly to take video. Plus, its video quality looked like something from the late 1990s.

The Car Key Cam really does look like a standard car remote. Be warned, though, that the microSD slot is not flush with the chassis and could require the user physically open the body to retrieve the memory card. The video below overviews it:

The PenCam looks like a pen, albeit a really big one. From an operational standpoint, it's not difficult to use but it may not be terribly covert.

A clip provided on the camera body allows the user to be hands-free. However, the significant size and weight may yield a wardrobe malfunction (pictured below). The weight of the PenCam causes the pocket to sag and camera to point in a different direction. 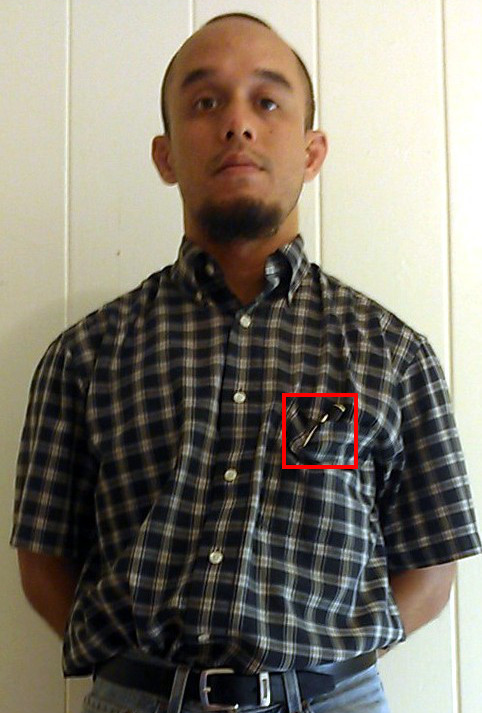 Alternatively, one could place the pen in their pants pocket, which provides a steadier and more covert placement. However, it could detract from the view because the camera may be too low, e.g., 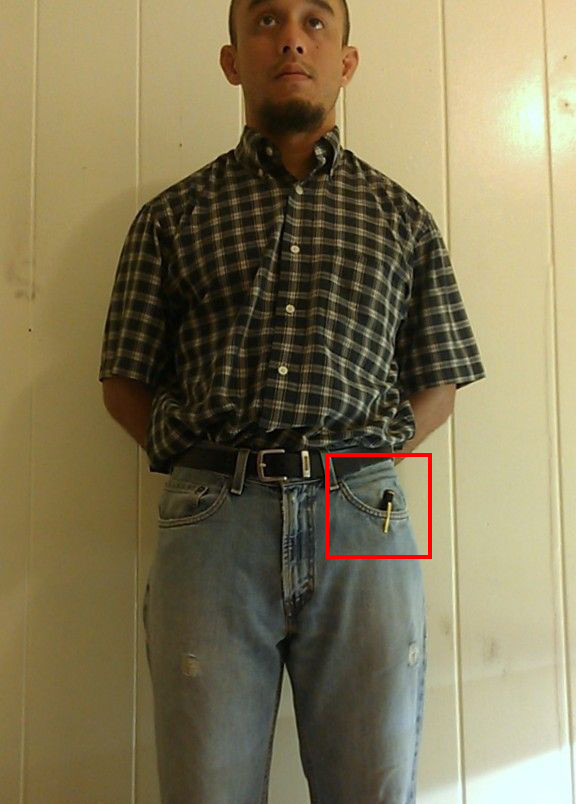 Here is a real life transaction with the PenCam in the shirt pocket. Notice that the FoV is severely tilted, causing problems in capturing the transaction:

Both cameras were fairly bad in low light, much worse than a regular camera: 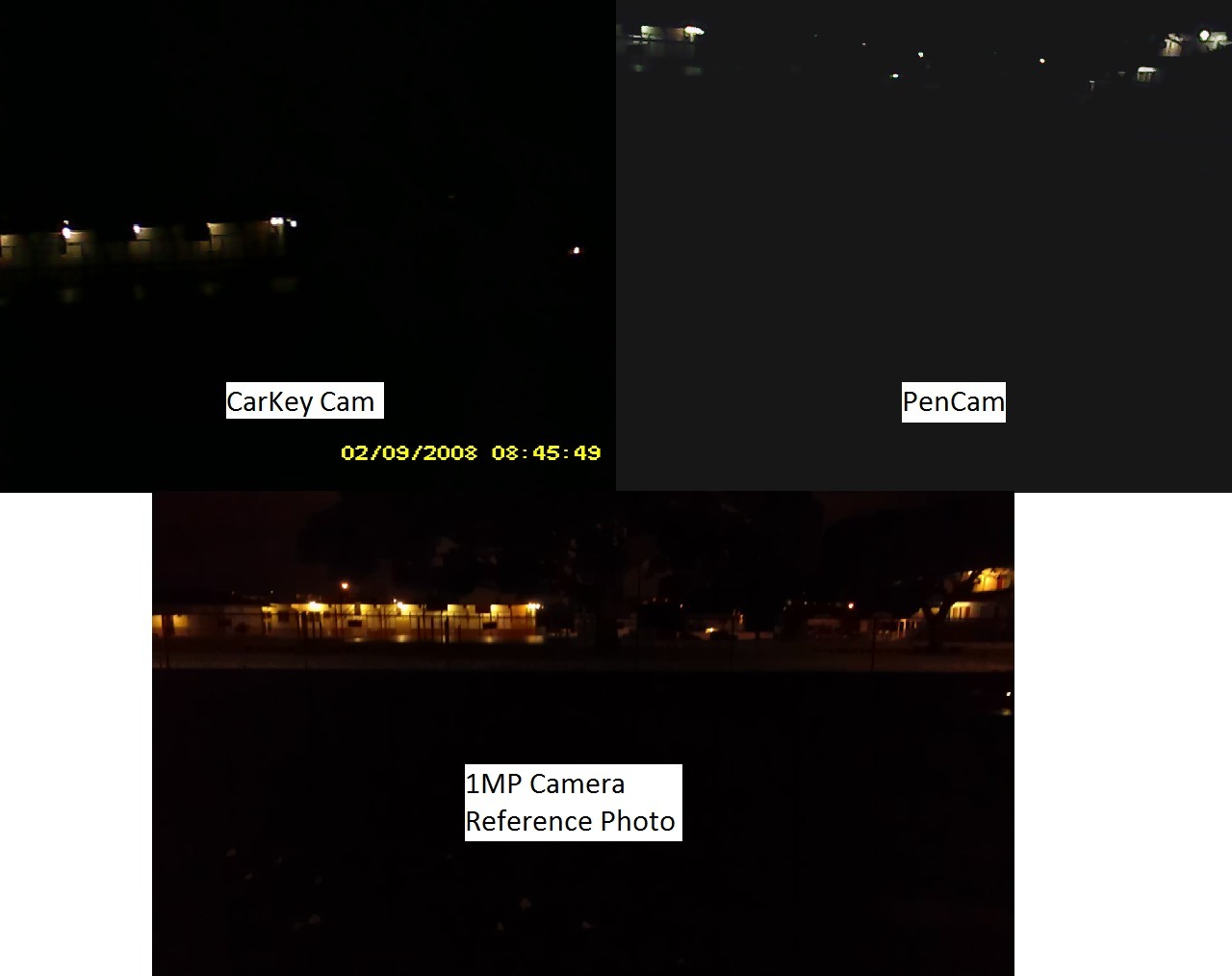 Here'a a video of low light with CarKeyCam in a parking lot.

And here's one with the PenCam:

The comparison below shows the two covert cameras above a 'reference' digital photo. The PenCam is actually fairly close to the reference, though the car key clearly lags. 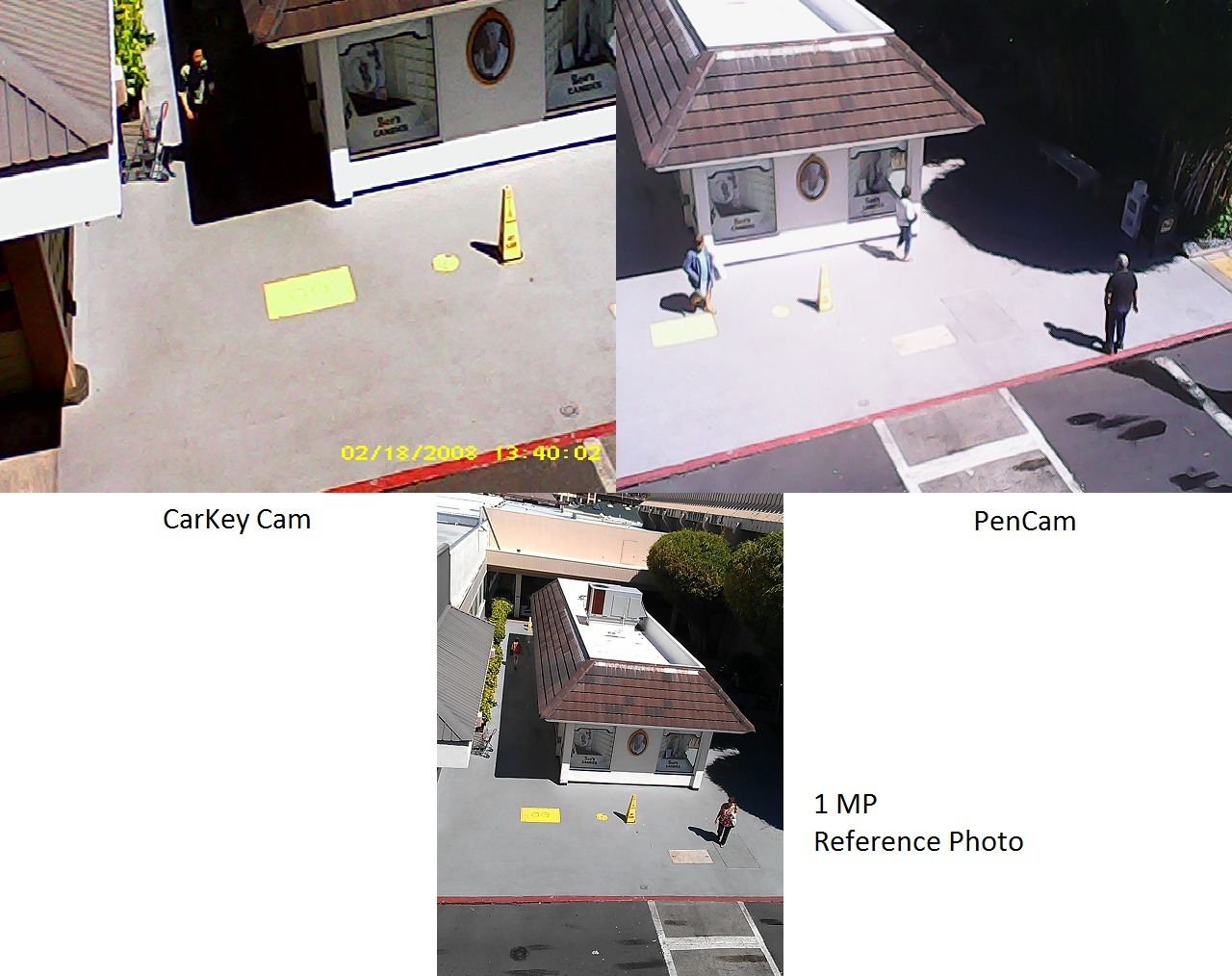 Here's a video from the car key camera:

And the pen cam:

The sample below is another view. Notice the bloom in the doorway form the two covert cameras: 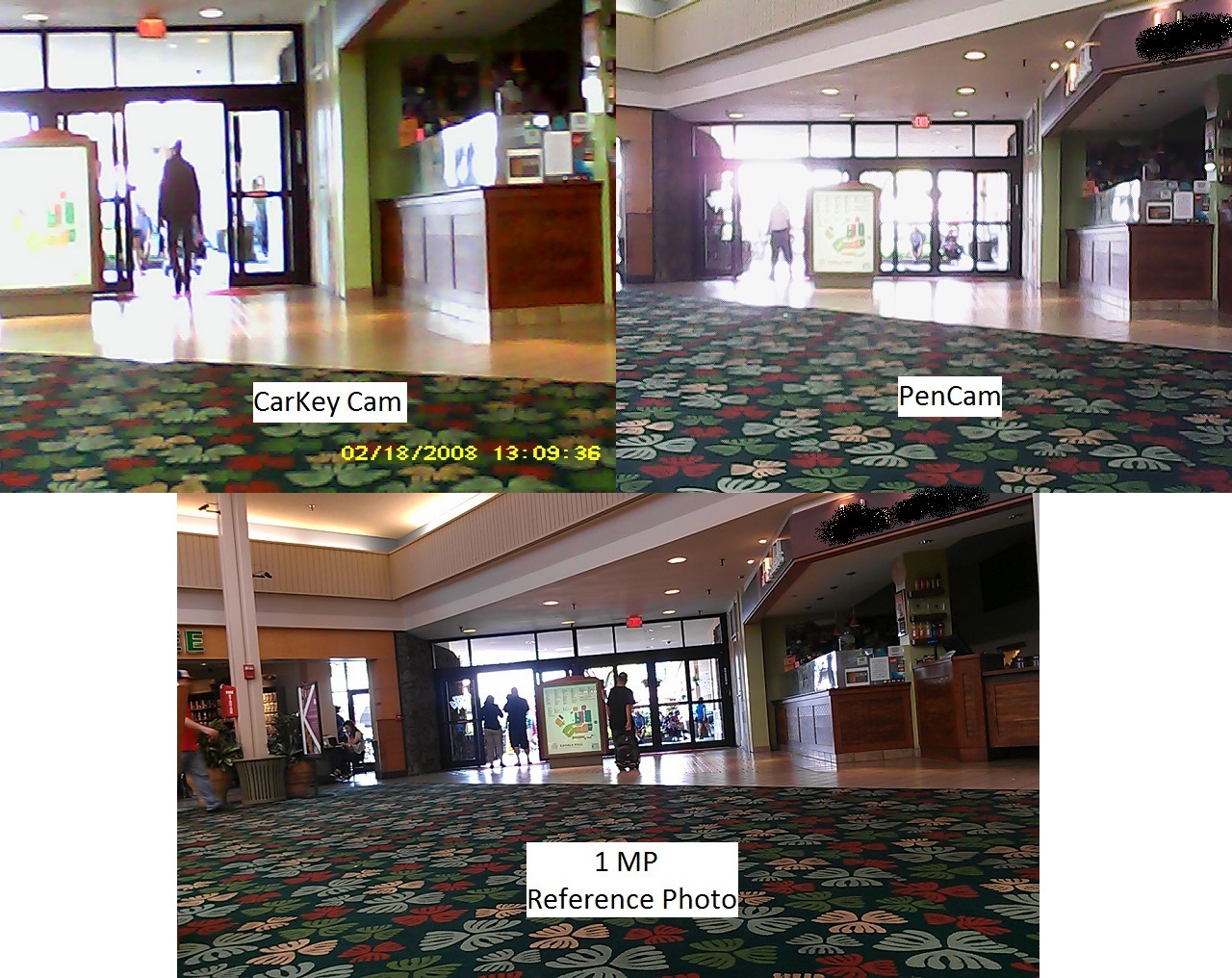 And the pen cam:

Finally, here is an even light test. Notice the discoloration of the car key cam: 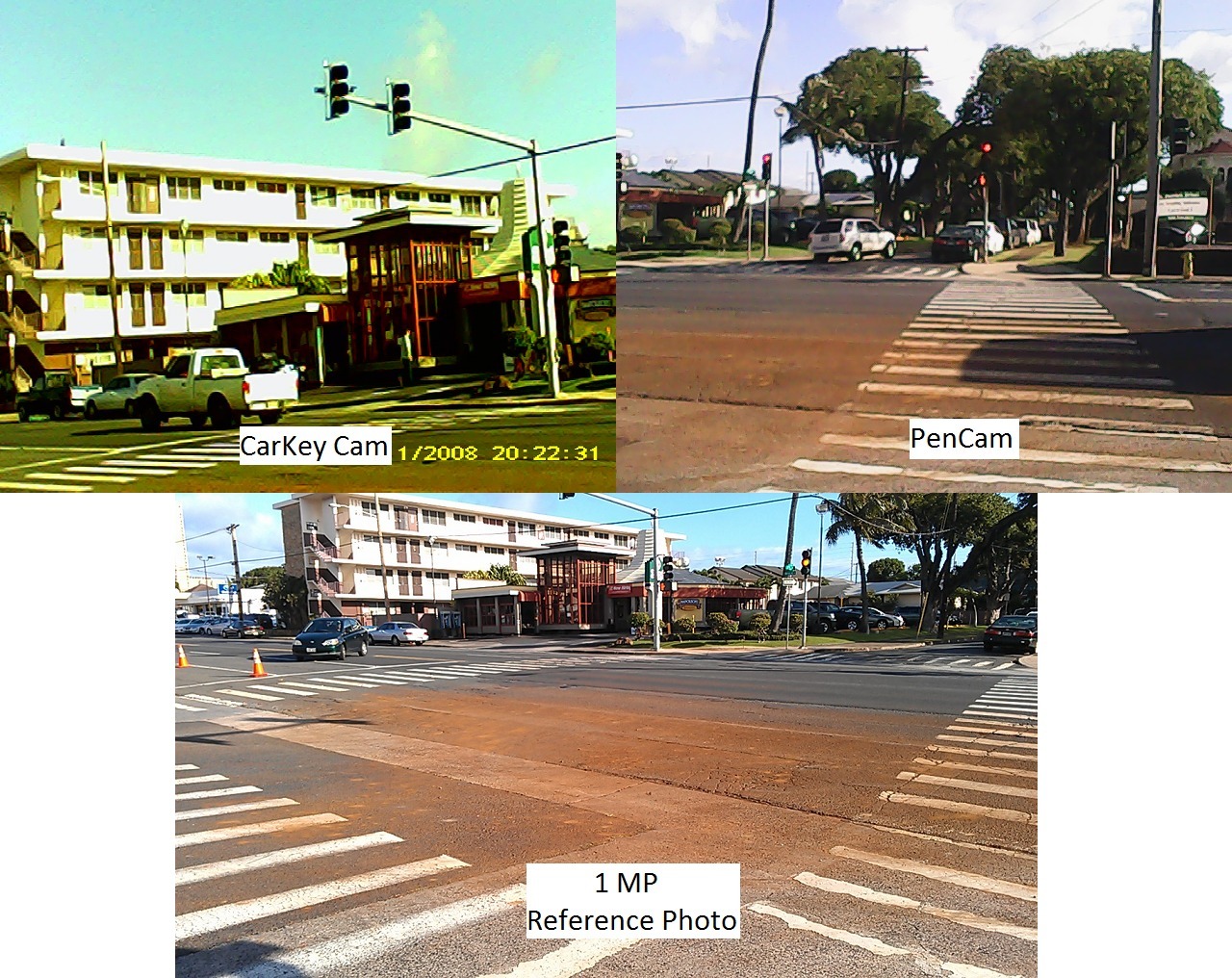 Finally, here's an indoor video from the car key cam:

And the same from the pencam: