Canon now owns one of the top global VMS offerings but how good are their IP cameras?

Will the combination of Canon IP cameras and Milestone VMS create the next Avigilon? Or will Canon's cameras be the anchor that drags down Milestone to mediocrity? 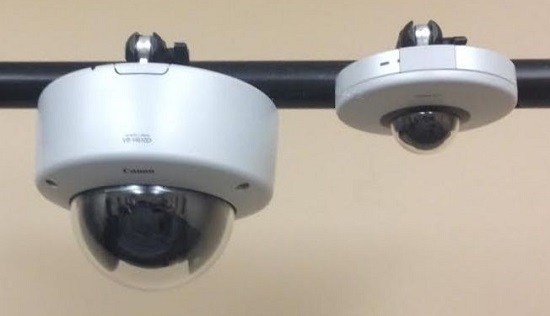 Here are our key findings from this test, both for Canon cameras in general, and specific to each camera:

The Canon VB-S800D is priced approximately similar to other 1080p fixed lens minidomes from manufacturers such as Bosch and Axis, but as much as $200 above lower cost competitors such as Dahua and Hikvision. Additionally, many low cost competitors sell models with integrated IR for prices well under the VB-S800D.

The VB-H610D is priced comparably to most top tier indoor 1080p cameras, but still higher than lower cost models from Samsung, Hikvision, etc. Note that none of these competitive models include the same remote adjustment features as the VB-H610D, though some include motorized focus/zoom:

The VB-S800D minidome is an above average performer compared to competitive minidome models. However, its lack of integrated IR is a disadvantage in dark scenes, with many low cost models now offering this feature. Additionally, higher than average bitrates and no VBR cap option may result in wasted storage space.

The key advantage of the VB-H610D is its remote adjustment feature which could speed installation, since installers no longer need to aim the camera on site, simply install it and move on. It could also reduce service costs if the desired field of view changes after installation. However, its average imaging performance, large size, and high bitrate are distinct disadvantages compared to top models today.

In this video we review the physical construction of the VB-S800D:

And here we review the features of the VB-H610D:

The 610D is radically larger than typical high-end domes:

This video reviews the web interface of the Canon cameras, essentially the same in both:

In this video, we demo Canon's remote adjustment features using their software tool and the VB-H610D.

By default, both cameras stream only in MJPEG using ONVIF. In order to connect and stream H.264, users must use a custom URL, adding "#profile0" after the IP address (172.20.128.33#profile0, for example). Even using this URL, we had some intermittent issues with the camera switching to MJPEG after a reboot, but disabling and reenabling it remedied these problems.

Both cameras are supported by direct drivers in Milestone XProtect. We had no issues connecting or streaming in XProtect Enterprise using Driver Pack 7.3, with all features (audio, I/O, etc.) supported.

We shot out the Canon VB-S800D minidome against Axis, Bosch, Dahua, Hikvision and IQEye in our conference room at full light, low light, and in the dark. In these comparisons we have included integrated IR cameras from Dahua and Hikvision, priced below the VB-S800D, in order to show the performance difference between it and low cost IR models available.

Starting with full light (~160 lux), the Canon VB-S800D true color representation of our scene and test subject, with performance otherwise similar to other models. 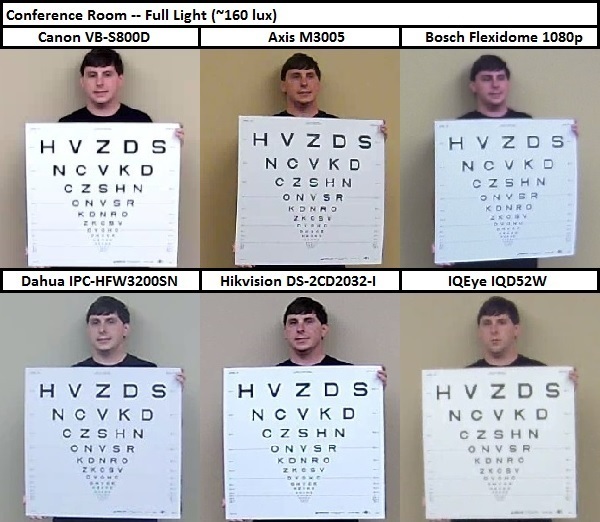 At ~2-3 lux, prior to the Dahua and Hikvision cameras switching into black and white mode with IR, the VB-S800D has the best low light performance of cameras tested. We can see our test subject's face easily, while it is obscured in other cameras. 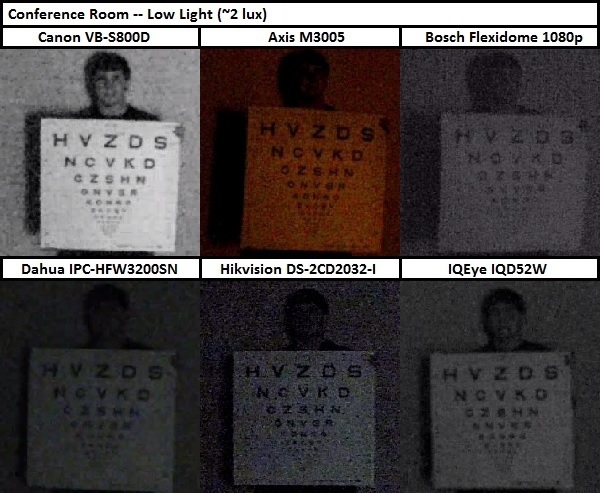 Below 1 lux, however, the VB-S800D provides only detection of our subject and chart, still better than competitive minidomes, which provide no usable image, the integrated IR models provide details of the subject's face and the test chart. 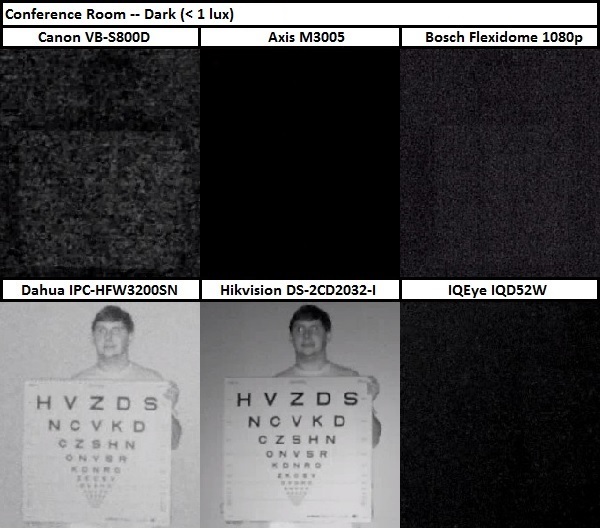 We shot the Canon VB-H610D against Axis, Bosch, Pelco, Samsung and Sony in our conference room scene at multiple light levels, and also in a warehouse for a WDR scene.

Beginning in full light, the VB-H610D provides true color representation, with the wall color and subject's skin tone and clothing closer to actual than in other cameras. 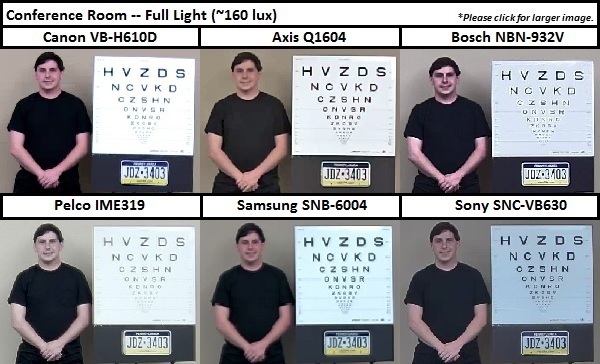 Lowering the lights to 2 lux, the VB-H610D performs similarly to other top 1080p models such as the NBN-932V and SNB-6004, with moderately less noise and artifacting than the Sony and Pelco cameras. 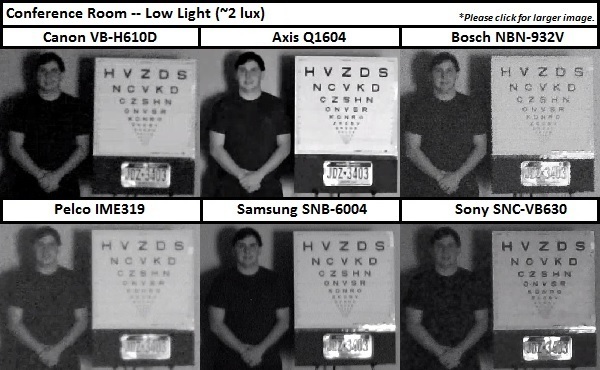 Below 1 lux, the VB-H610 is easily outperformed by the Samsung SNB-6004, as well as the Bosch NBN-932V, with usable image details roughly similar to the Sony SNC-VB630. 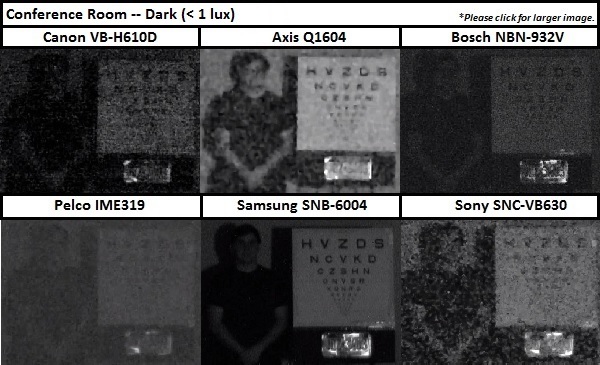 Canon's Smart Shade control performed worse in both light and dark WDR scenes than the true WDR cameras in this test. Against strong backlight, it marginally improved visibility of the subject. However, in the dark area next to the open overhead door, the subject and chart can barely be seen at all. 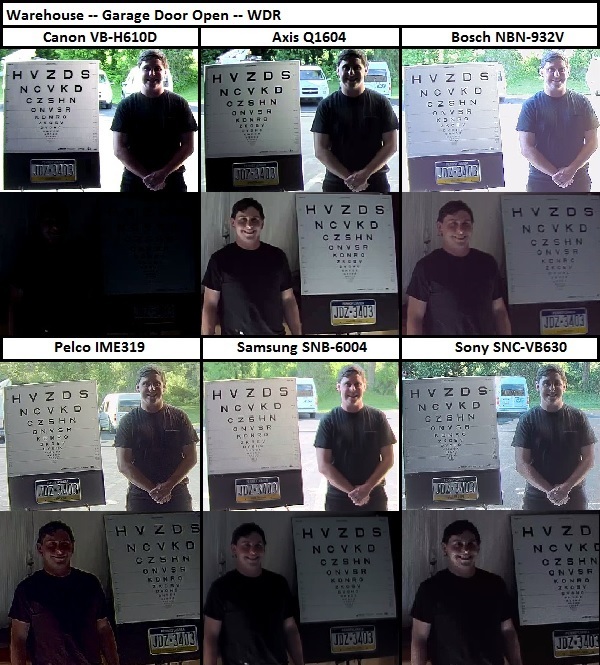 The VB-S800D's bitrates were average in full light, similar to Axis, Bosch, and IQInVision. However, at ~2 lux, its bitrate was the highest of all cameras tested, running more than double some cameras. Note that at this light level the M3005 provided very little usable image, resulting in a very low bitrate.

The VB-H610D has the highest bandwidth consumption in full light and <1 lux scenes. In the dark bitrates were especially high, more than double the next lowest cameras, and over six times the Samsung SNB-6004.

Hanwha Wisenet X Plus PTRZ Tested on Feb 14, 2020
Hanwha has released their PTRZ camera, the Wisenet X Plus XNV-6081Z, claiming...
Axis Takes Over Canon Surveillance Sales and Marketing on Sep 01, 2016
The wasteful Axis / Canon conflict is ending. After more than a year of...
Axis / Canon Conflict on May 18, 2016
Canon spent $2.8B to acquire Axis, and in doing so created one of the...
ISC West 2016 Best and Worst on Apr 07, 2016
ISC West 2016 had very strong attendance and moderately strong new products,...
Canon Acquires Axis Communications on Feb 10, 2015
This is the biggest deal in video surveillance ever. Just 8 months after...
Milestone XProtect 2014 Tested on Sep 03, 2014
In this third entry in our ongoing VMS test series we provide in-depth...
Comments (3) : Subscribers only. Login. or Join.