After years of speculation and months of waiting since its announcement, Axis' first access control offering is hitting the market (at least in the US).

The hardware is the A1001, a two door controller, and the included software is Axis Entry Manager, supporting up to 66 doors.

Here's a shot from our testing / video screencasts of the A1001: 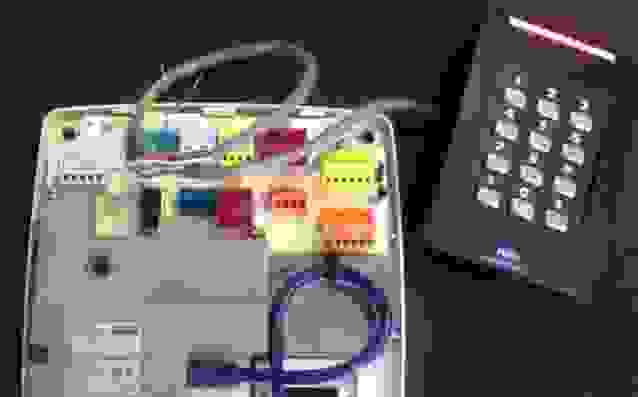 Of course, the access control market is filled with competitors. On the IP side, HID's Edge offering is frequently cited.

In this report, we share our test findings of the new Axis control offering, both hardware and software, contrasting it to HID. In future tests, we will examine integration with third party offerings like Genetec and Milestone.

The controller can be used either as a 'standalone' access system with up to 33 controllers and ~400 users or as part of an ADP access platform from vendors like Genetec, Imron, NLSS, and Milestone.

Pricing: The A1001 is available in limited US distribution only for ~$550.

The default management platform is serverless and embedded into the A1001. The program offers basic features, but is closed to software integration with other systems and cannot be customized. While Axis Entry Management allows the A1001 to operate without needing additional software, it is weak and restrictive.

Like their video management software, Axis is limiting their access software as to minimize competition with their partners.

Compared to HID Edge and Solo

With the A1001 being positioned as a 3rd Party controller, it draws comparisons to HID's Edge and Edge Solo systems that also can be used as part of, or independently in an access control system.

However, not all comparisons stack in A1001's favor. Some drawbacks include:

The strength of Entry Management is most tangible for small commercial access applications like office buildings, storage facilities, or warehouses. For example, an office building application needing four doors controlled can use two A1001s with a cost just over $1100 and alleviates the need for additional management software.

Entry Manager will not be useful where high security or video integrated access platforms are needed. Despite being an Axis offering, Axis does not integrate it with its own video offerings (such as ACS, ACC, AVHS, etc.).

The advantage of using A1001s with 3rd party platforms is unclear until pricing and integrations are fully fleshed out. While the cost of Axis controller may be more expensive per door, the ease of installation and additional I/Os it offers could be an advantage over other controllers.

The video below illustrates the size and build of the A1001. The controller is a self-contained appliance designed to be wall or ceiling mounted, with cabling routed out the bottom:
Connecting the Controller: Wiring the A1001 is easy. Axis considered that even veteran video installers may be new to Access Control and applied emphasis to make it simple. Wiring begins in a software wizard, where the installer configures the unit based on the hardware it will be connected to. This culminates in the controller 'configuring itself' based on those answers, and then generates a printable Pin Connection Chart that shows where each component connects to the controller:

Interestingly, Axis' documentation specifies STP network cabling used to connect both the controller AND the switch to the network backbone: 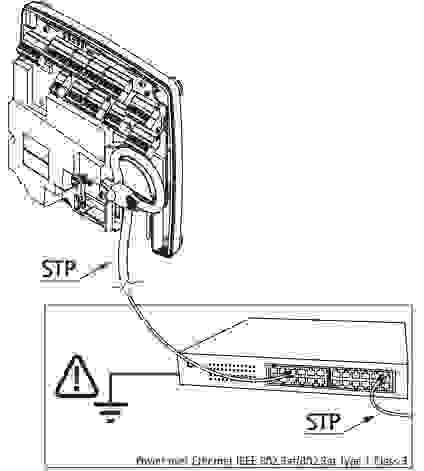 User Management Interface
Live View: The ability to see the door's current state is limited to forensic lookups only. The 'manual control' buttons (eg: Grant Access, Unlock, Lock) are located in a different tab than where 'Events' can be recalled, and without a separate video or intercom system there is no way to verify what is happening at the door as it occurs:
Adding/Importing Users: The onboard tools are useful for administering systems with a small number of users, but will quickly lose utility if more than a few hundred cardholders are supported. The process of adding new users is menu driven and straightforward, but does not scale to 'full cardholder' status more than one at a time.

An 'Import' feature is provided, which allows bringing in a .csv roster of names, but only basic details (Name, PIN, Card Number) can be imported, leaving the process of assigning each name to a group and schedule a one-at-a-time process:

Reports/Alerts: While a wide array of information is logged by the controller, that information is hard to manage. Queries are fixed to ~50 'topics (eg: Denied Credential Attempts, Configuration Logging, Door Warnings), but there is no list explaining those terms.
Printing the result of a query is not supported, and while the browser may support a 'print' option, only the results returned in the event box will be printed.

Access Control Door Controllers 101 on Jul 26, 2022
The door controller is the access system component that allows other devices...
Open Access Controller Guide (Axis, HID VertX & Aero, Isonas, Mercury) on Sep 22, 2021
There are dozens of software platforms in the access control market, but few...
Kantech EntraPass Tested on Apr 21, 2021
Advanced feature access control systems are typically restricted to dealers...
Kantech KT-1 PoE+ Controller Test on Apr 01, 2021
Tyco-owned Kantech is commonly cited as an integrator favorite access...
Ubiquiti Access Control Tested on Oct 21, 2020
Ubiquiti has become one of the most widely used wireless and switch providers...
ZK Teco Atlas Access Control Tested on Aug 20, 2019
Who needs access specialists? China-based ZKTeco claims its newest access...
ACRE-Acquired Open Options Access Company Profile on Dec 17, 2018
Who is the company ACRE is acquiring? In this note, we examine Open...
Axis Releases First New Access Controller In 5 Years (A1601) on Jun 15, 2018
It has been 5 years since Axis 2013 entry in the physical access control...
Top 4 Biggest Problems Selling Access Control 2018 on Mar 23, 2018
We received 150+ responses from integrators when we asked them "What is the...
Mercury Releases New Series 3 Redboard Access Panels on Feb 15, 2018
Mercury Security has their first major product release post-HID buyout, and...
Access Controller Software Guide on Dec 11, 2017
Properly configuring access controllers software is key to a professional...
Dahua Access Control Tested on Oct 10, 2017
Can Dahua become a major force in access control? We bought Dahua's ASC1202B...
Cloud Guy Prints Book, Misses Irony on Sep 15, 2017
On-premise security systems are dead. But $75 print books are alive and...
Dahua and Hikvision Entering Access Control on Sep 05, 2017
Until now, Chinese video giants Hikvision [link no longer available] and...
Paxton Drops US Reps, Plans Major Expansion on Dec 07, 2016
Paxton is gearing up to make a big run at  US access control success. The...
Axis Releases Access Credentials - Insecure But Convenient on Nov 02, 2016
Axis continues to build out their own end-to-end 'solution'. The company...
Axis Launches IP Speakers on Sep 21, 2016
First, Axis introduced an IP horn, then it was video intercoms, and now it is...
Chinese Spam Access Control Is Here on Aug 04, 2016
Notorious spammers like Longse, Cantonk, and Wodsee have flooded the video...
Axis Exploit Allows Changing Camera Root Password Confirmed on Aug 02, 2016
IPVM has confirmed that using the Axis remote format string vulnerability, an...
Access Control Does Not Want ONVIF on Jul 27, 2016
ONVIF has become a major force in video surveillance. Despite its well...
Feenics Hosted Access Control Tested 2016 on Jul 07, 2016
In the access market, new entrants are uncommon. Because of that, newcomer...
AMAG Access Control Company Profile on Mar 18, 2016
In our 12th access control company profile, we examine AMAG Symmetry access...
Brivo Access Control Company Profile on Feb 09, 2016
This is our 9th in a series of access control company profiles. In this...
RS2 Access Control Company Profile on Jan 13, 2016
Inside we examine RS2 Technologies Access It! line for best customer fit, key...
Honeywell NetAXS Access Control Profile on Jan 06, 2016
Honeywell is one of the biggest names in security, and one of their most...
Keyscan Access Control Company Profile on Dec 17, 2015
Access company Keyscan is part of one of the biggest access companies in the...
Paxton Access Control Company Profile on Dec 07, 2015
This note profiles access company Paxton, our 3rd installment in an ongoing...
Axis Powered Doorcam Launched on Nov 25, 2015
The doorcam market is getting hot, with the most notable player raising $28...
Tyco Kantech Access Control Company Profile on Nov 24, 2015
In this first entry in a new series profiling access control companies, we...
Axis Q3 2015 Growth Rebounds on Oct 15, 2015
After an extremely bad Q2, where true sales actually declined, Axis has...
Avigilon New Embedded Access Controller on Sep 28, 2015
Avigilon's big release for ASIS is the "Access Control Manager Embedded...
The Prox Reader Shootout - Allegion, AWID, Fairpointe, HID, Honeywell, Rosslare on Aug 27, 2015
In this report, we put eight readers of the popular 125 kHz contactless...
New: Axis Video Intercom on May 12, 2015
A suicide resistant camera, an IP horn and now a video intercom. Axis might...
Access Interoperability: Going Nowhere on Nov 11, 2014
The dream was simple: access control interoperability.  You know; the ability...
AMAG 8 Aims to Make Takeovers Easier on Nov 03, 2014
In this note, we examine AMAG 8's new additions, breaking down how it impacts...
Axis Admits Access Control Expectations Low on Oct 17, 2014
Axis entrance into access control had been anticipated for years. Last year,...
Winners Losers Fall 2014 on Oct 13, 2014
We are all losers, IPVM included. The historically poor new releases for...
Axis Releases Card Reader on Sep 25, 2014
Last year, Axis put the security market on notice by releasing the A1001...
Access Control Server Guide on Sep 09, 2014
Electronic access control systems need to be managed. The 'server' though can...
Milestone Access Control 2014 Released on May 28, 2014
Milestone has announced an update to its first venture into integrated access...
Comments (14) : Subscribers only. Login. or Join.