This kit is so inexpensive we could almost not believe it.

8 HD IR cameras plus an DVR with a 2TB hard drive for $499 total. Here's what it looks like, laid out on our table: 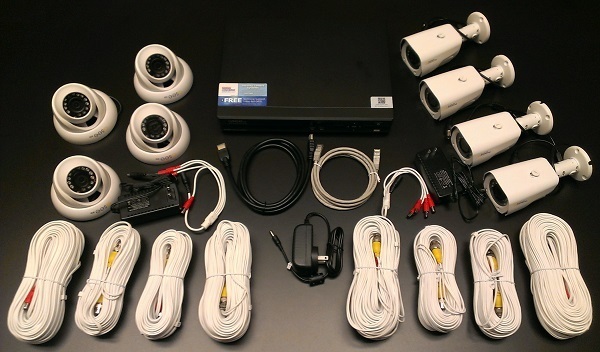 $499 is so incredibly low you can barely buy a single integrated IR camera from Axis or Avigilon for that price. And here we have 8 times the number of cameras plus a recorder and storage thrown in.

Now, Q-See, a Dahua OEM, has released this $499 HD CVI based kit that is even less expensive.

We bought the kit (from Costco) [link no longer available] and put it to the test comparing it to HD IP cameras and Dahua (original) HD CVI cameras.

Should you be switching to this? What is the competitive potential? Find out inside.

Q-See surveillance kits are available on the internet and at warehouse stores such as Costco and Sam's Club. MSRP is ~$999 USD, but the kit we purchased was $499 USD online [link no longer available].

The limitations of the recorder / software, like other Q-See / Dahua offerings, limits its application to simpler / lower end applications.

However, the video quality was solid, comparable to Integrated IR IP cameras, and better in low light than many of the 'budget' offerings from major brands who lack IR.

Given the steep price drop, about half of even the lowest cost commercially available HD IP kit, and the solid video quality, this will be highly attractive to anyone who just wants HD video, simple setup and desires to save $500 to $1000+ for HD IP offerings.

More importantly, the ability to offer this kit so inexpensively is a bellwether for the emerging competitive force that HD CVI is becoming in the video surveillance.

Connecting cameras was simple, requiring the user to plug in the cable to the BNC connector in the back of the unit and plugging in power. We also demonstrate PTZ functionality on both DVRs, and we found no issues connecting or controlling the PTZ in either.

Here, we show what was included in the kit, which contains:

This video reviews the physical layout of the Q-See recorder. Key points:

We review the bullet and turret dome cameras that are included in the kit in the video below. Notice the similarities between the Q-See and Dahua models of each form factor.

Next, we took an inside look at a Q-See QCA7201B 720p IR bullet in this teardown video. Users get a good look at the cameras lens, image sensor, camera chip, power supply board, and IR led ring.

We took photos of the front and back of the camera chip and compiled them into one image for readers to see more clearly than what could be seen in the camera teardown video. While it is hard to discern from the image, the Dahua chip reads:

For a full size image, please click on the image below. 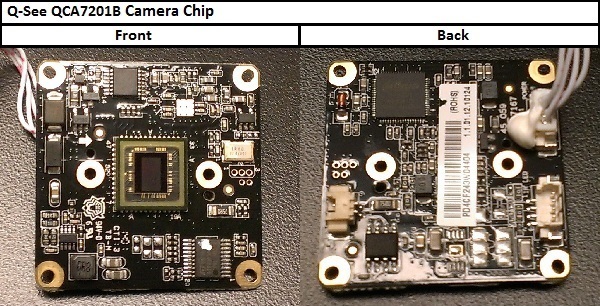 In full light, ~160 lux, we found details delivered by the Q-See, Dahua HDCVI and IP at the same resolution are similar, with no advantage to either. 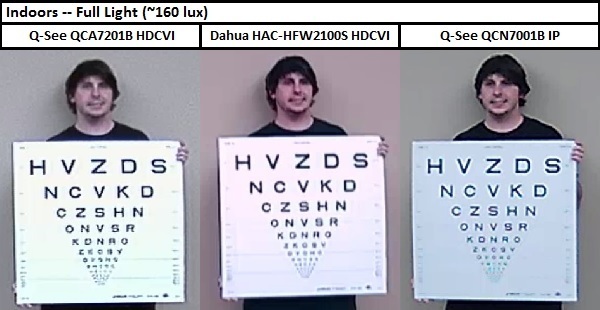 In a dark scene with IR on, both Q-See and Dahua HDCVI displays slightly less visible noise than its IP counterparts. The Q-See HDCVI is sharper than both the Dahua HDCVI and Q-See IP by default, and this makes characters on lines 5 and 6 both easy and hard to read. 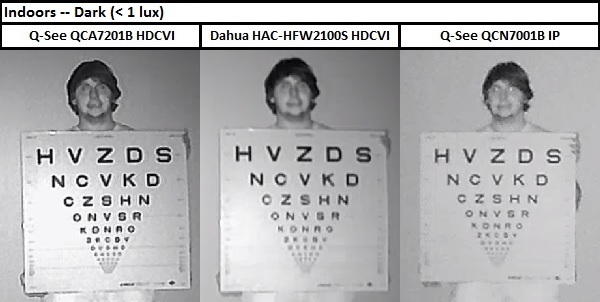 In this video, we take a look at the web interface for the Q-See HD Analog and Dahua HDCVI UI. The biggest difference between the two is that a QR code is available for the Q-See, which allows us to connect to a free cloud monitoring service.

Next, we demonstrate the setup process for Q-See's free cloud service. The only difference between the cloud based web UI and local web UI is the load time between operations. We did not have to port forward or setup UPnP in order for the unit to be access through the cloud.

Costco Concierge Services (tech support) is included free of charge for Costco members. An image of the magnet on the DVR upon unboxing is attached. 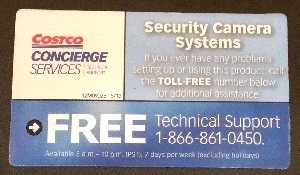 We called Costco tech support in the middle of the day and, after a few menu options and a ~2 minute wait time, we connected to a technician. They were able to answer basic installation and operation questions without much delay, but there were times when it seemed like they were flipping through a manual or looking something up online.

HD Analog vs IP Guide on Jul 16, 2019
For years, HD resolution and single cable signal/power were IP camera...
HD Analog DVRs With Exacq, Milestone and Genetec VMSes Tested on Aug 23, 2016
HD analog offerings have proven to deliver HD video at radically lower...
Q-See Company Profile on May 17, 2016
Q-See is a direct-to-consumer camera system reseller that was ranked on the...
Hikvision Ezviz Tested on Dec 28, 2015
Last month, Hikvision Launched Direct End User Sales with their Ezviz line,...
Samsung AHD 720p Kit Tested on Aug 11, 2015
Not long ago, an individual MP camera was commonly $300 and a DVR was...
Testing Dahua HDCVI Encoder With VMSes on May 14, 2015
HD Analog cameras have incredibly low prices for true HD video. But HD...
Testing Honeywell HQA HD-CVI on Apr 22, 2015
HD analog support continues to expand, with Honeywell now releasing its own...
Testing AHD 2014 on Sep 24, 2014
This is where the innovation is at. During Essen and days before ASIS, IPVM...
Fall 2014 New Products Directory on Sep 23, 2014
New releases are weak this year, and unfortunately, the trend does not appear...
IP Camera Costs Comparison and Trends 2010 - 2014 on Jun 25, 2014
Over the past 4 years, the average price of 100+ IP cameras surveyed has...
Comments (18) : Subscribers only. Login. or Join.