4K is the next big thing in video. While 1080p has become the 'standard' for HD, the next step is 4K, quadrupling resolution / pixel count from ~2MP to ~8MP. It is already showing up in TV sets as well as consumer cameras. Indeed, the first 4K surveillance camera was announced this spring, with many more announcements certain to follow this fall.

Can 4K really make a difference for surveillance? Or is Axis right that the 'megapixel race is over'?

We bought a GoPro Hero3 Black camera [link no longer available] that delivers 4k resolution (indeed up to 12MP). What is especially interesting is that they use the same chip manufacturer (Ambarella) used by cameras from many well known manufacturers (like Avigilon, Bosch, Pelco, Hikvision, Honeywell, etc.).

We took the Hero 3 Black and put it to the test at FoV widths from 20' to 160' feet to understand 4K performance. 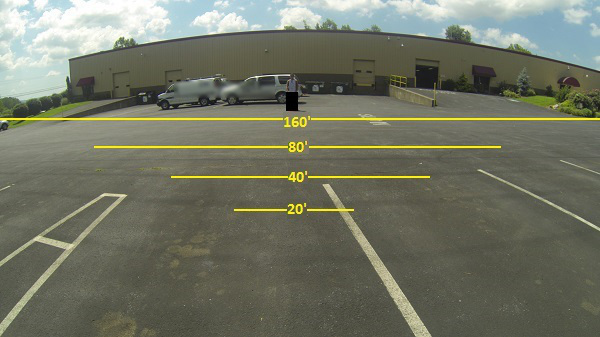 4K clearly made a material difference in image quality at each FoV width tested, though with different practical impacts:

In wider areas (50 to 100 feet) we expect to see the most practical impact. This includes lobbies, parking lots, long hallways, etc. Bigger, wider, longer areas are likely to get more facial and license plate details. However, at shorter ranges (50 and under), unless super small details are of interest (like a tattoo on someone's hand or the serial number of a bill), 4K is likely to be overkill.

Though the increase in resolution is great, similar to the jump from standard definition to megapixel, users should be aware that low light performance may suffer in 4K cameras, especially considering HD cameras have only truly begun to perform well in low light in the past 1-2 years. Low light performance of 4K cameras remains to be seen when production models become available.

In all of these comparisons, 12MP and 4K are fairly close in pixels per foot (4000 horizontal pixels vs. 3840). However, 4K images tend to look moderately worse for two reasons:

First, we began with an extremely wide 160' horizontal field of view. 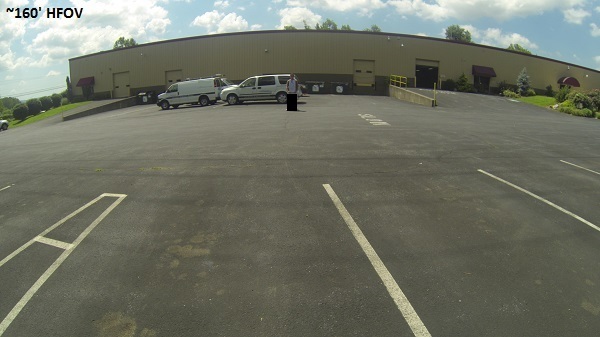 At this width PPF ranges from 8 to 25 as resolution increases. 12MP and 4K resolutions are able to capture some details, such as clothing and hair style, as well as lines 1-2 of the chart. Line 1 is potentially readable at 1080p, though not guaranteed, and details of the subject are reduced drastically at this resolution and lower. 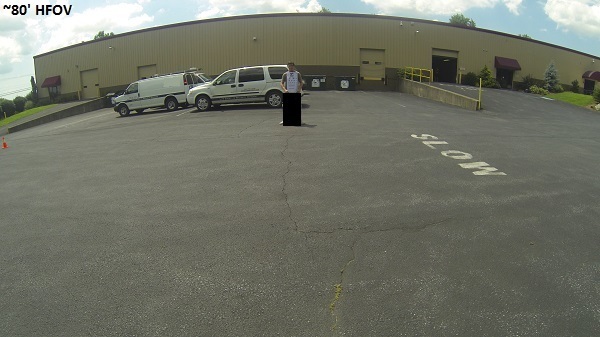 At this level, the performance gap between 12MP/4K and 1080p is more noticeable. Details of the subject are easier to see, and the chart may be read to at least line 4 at 4K resolution, while only lines 1-2 may be made out at 1080p. 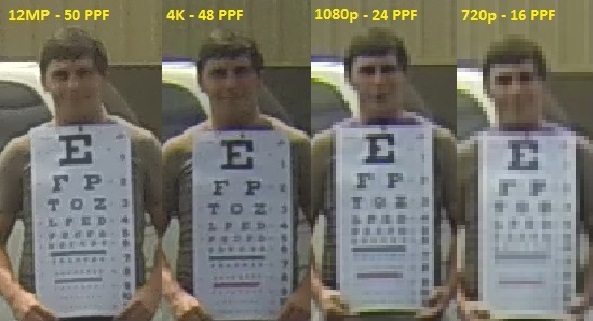 Next, we further reduced the FOV to 40'. 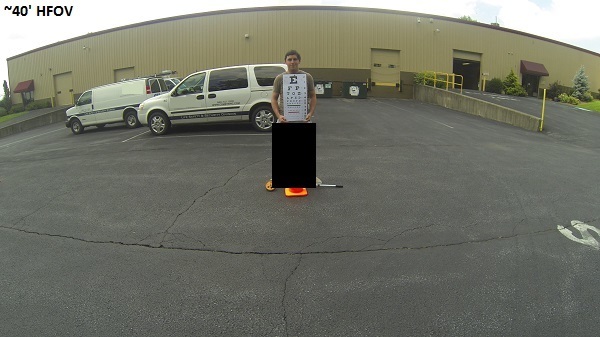 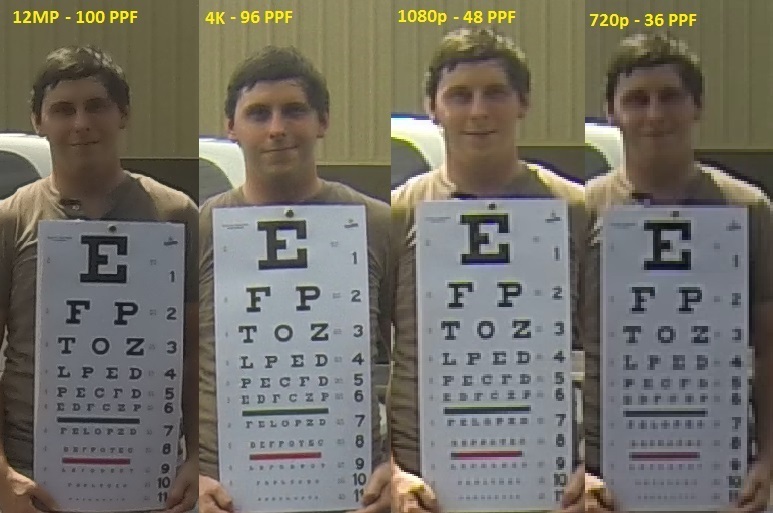 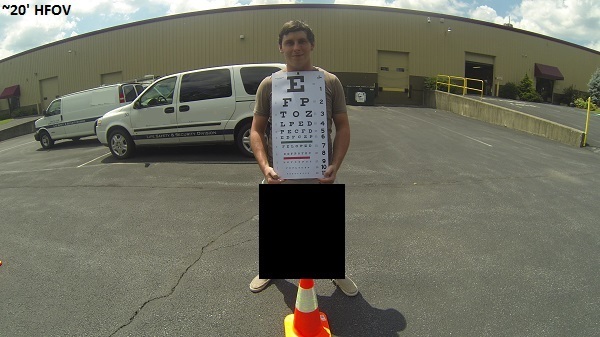 In a field of view this narrow, even our 720p camera captures fine detail of the subject, with letters on the test chart visible down to rows 7/8, making 12MP/4K likely overkill for FOVs this narrow. 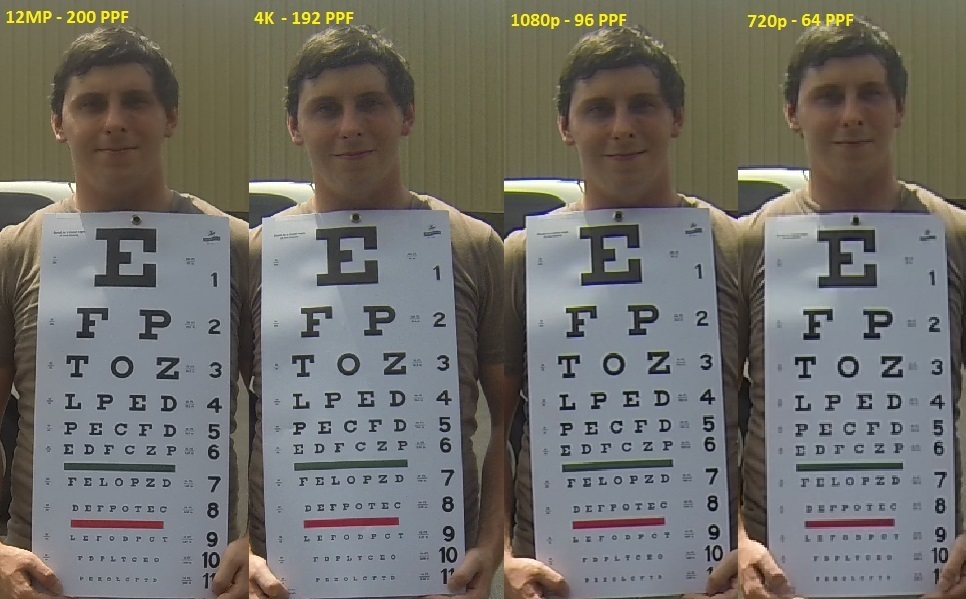 We tested the GoPro in a ~2 lux scene to gauge low light performance, as seen below. However, readers should not consider this a true test of 4K surveillance cameras, as the Hero 3 uses a consumer sensor and F2.8 lens, both of which negatively impact low light performance. 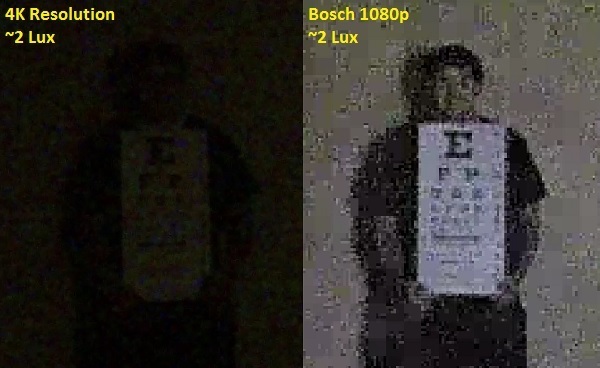 For this test, we used a GoPro Hero 3 Black Edition [link no longer available]. Though a consumer camera intended for "adventure sports" applications, it reportedly shares some chips with upcoming surveillance cameras. Specs on the camera are as follows: