The Scheme Hikvision and China Importers Use To Avoid Tariffs

Hikvision and numerous China importers are avoiding 25% tariffs by including an SD card slot in their IP cameras to claim they are 'digital still image cameras', thereby saving them millions.

Technologically, it is baseless. The 'principal' function of an IP camera is to capture and stream video to a recording device (such as NVRs or VMSes). At best, even with an SD card on-board, saving 'still images' locally is an ancillary function that is very rarely used.

Should this be legal? Is this legal?

Inside this note, we examine this trend, including:

Goods imported to the US are classified according to an official list of thousands of HS codes. However, there is no obvious code for security cameras. An IPVM review of IP camera import records since 2010 indicates the products have typically been considered 8525.80.30, or "Television cameras, digital cameras and video camera recorders", which has a general tariff rate of 0.5%.

Some importers attempted to get Customs and Border Patrol (CBP) to classify IP cameras as 8525.80.40, or "digital still image video cameras", which has zero tariffs, the legacy of a 1996 WTO pact intended to encourage trade in IT products by eliminating tariffs. The importers' argument was that the surveillance camera had two functions: not only capturing live images/video, but also taking and storing still images, chiefly via an internal SD card.

In the past, CBP rejected this, since the main purpose of security cameras is obviously to stream video to an external device. For example, in 2012, CBP ruled that a Samsung Techwin PTZ dome camera could not be considered a "digital still image video camera" even if it saved still images internally because:

these are multifunctional cameras with the principal function being performed by the capturing of real-time images [i.e. video], which are then transmitted to a location outside the camera for viewing and recording [emphasis added]

In that ruling, CBP said the appropriate classification was 8525.80.30.

The reason is obvious: the "digital still image video cameras" category was left out of the official tariffs list. However, 8525.80.30 (television, digital cameras, etc) was included, thus becoming subject to 10% tariffs, which increased to 25% this May.

Numerous instances of the rise of IP cameras being classified as "digital still image video cameras" since the tariffs were enacted were found in the private customs data website Import Genius.

Swann, owned by Infinova, was a clear example. 60 separate import shipments to Swann Communications USA used the "digital still image video camera" classification for IP cameras after the tariffs, as the excerpt below demonstrates: 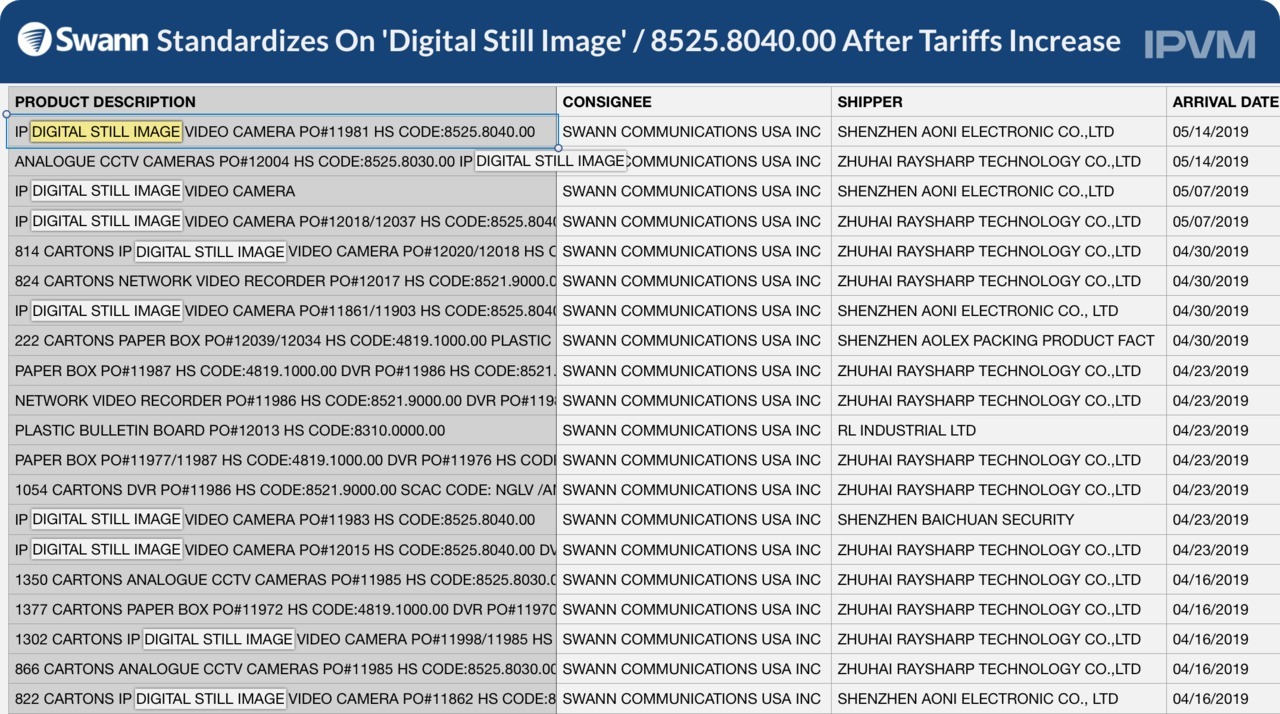 However, prior to the tariffs, Swann did not once use 'digital still image' nor the code for this category, as the excerpt below shows: 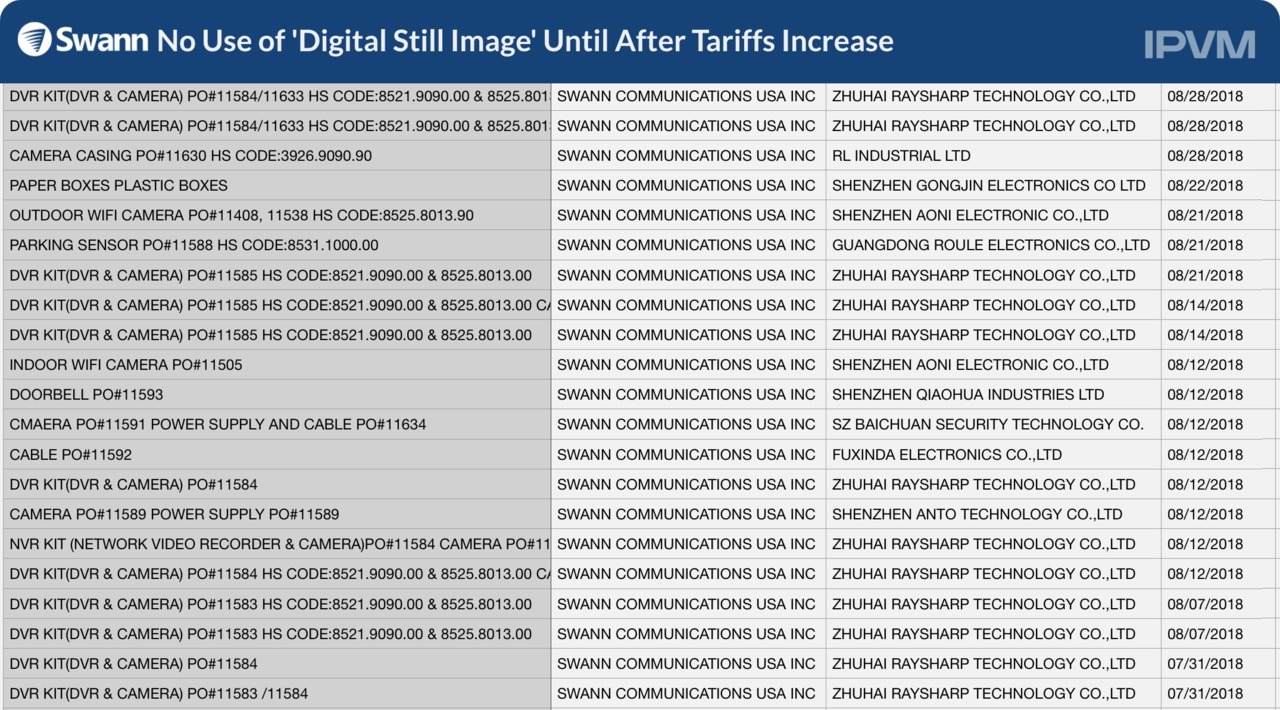 Swann's case is so obvious because they were one of the few manufacturers to actually show both detailed descriptions and tariff codes. Swann did not respond to our request for comment.

A similar trend (on a smaller scale) could be seen for Hikvision importers:

Tip of the Iceberg

The shipping records cited from Import Genius show only a fraction of what is happening since most import records do not include the specific HS category, just general product descriptions (often vaguely described as cameras or monitor probes, etc.).

Most of the 10 video surveillance importers IPVM spoke with were aware of this tactic, though a few seemed genuinely surprised, noting that they could not understand how their competitors could not raise prices until we informed them of this.

Interestingly, among those that knew about this, most expressed concerns about it working. Many companies mentioned discussing this with Hikvision and anecdotes from others where IP cameras sometimes were accepted as 'digital still image cameras' but other times they were held up, requiring payment of tariffs for 8525.80.30 or requiring hiring a lawyer to protest with uncertain timing and outcome.

However, this was certainly tempting for importers. Many IP cameras come with SD card slots as they add minimal expense. Indeed, one tactic recommended was to add an SD card slot but not wire it up, making it even cheaper, though fake. The thinking here was that even if customs was to open up the camera housing, they would, at worst, look to see that an SD card slot was there, not testing if it actually worked (which is not a major risk with users since they are so rarely used).

As one importer, who says he did not use this tactic, explained:

I was so happy, I was on board. But I emailed my lawyer, my shipping broker, both came back to me and said NOPE. Don’t do it, it’s a crime.

For complex legal reasons, calling IP cameras "Digital Still Image Video Camera" is not a clear-cut case of customs fraud, i.e. lying about a product in order to dodge tariffs, according to trade experts who spoke with IPVM.

Rather, as long as the SD card slots are real and not fake, this could be presented as a case of legitimate "tariffs engineering", i.e. modifying a product to gain preferential rates. Tariff engineering, within certain constraints, is legal and is even advertised as a service by law firms.

As mentioned above, in 2012 CBP ruled that a Techwin surveillance camera was clearly not a "digital still image video camera" since its "principal function" was to stream video to a remote location.

However, in a case brought by Hikvision, in 2017 CBP ruled that several Hikvision IP camera models with still image storage capability could be classified as "Digital Still Image Video Camera".

The case explains the issue when multiple functions are present:

"Composite machines consisting of two or more machines fitted together to form a whole and other machines designed for the purpose of performing two or more complementary or alternative functions are to be classified as if consisting only of that component or as being that machine which performs the principal function." [emphasis added]

However, in the case, the CBP could not determine the "principal function" of the Hikvision cameras:

"The instant cameras contain no features that predominate over any other features. As such, we are unable to determine the principal functions of the cameras. " [emphasis added]

The result is that any IP camera with an inbuilt image recording ability can be considered a "digital still image video camera." Most likely, this even includes cameras that only record video on an SD card, but not still images. In its 2017 ruling, CBP defined "images" as either still or moving, and the key distinction was between TV/surveillance cameras that "do not have any inbuilt capability of recording images" vs. "digital cameras" which do. Additionally, in 2014, CBP rejected an attempt to classify a security camera as a "digital still image video camera" in part because it "does not permanently record video internally [emphasis added]". To be sure, since CBP has never made a ruling about a camera that internally only records video but not still images, this interpretation is not definitive.

While IP cameras can be used for recording still images, recording video internally, controlling garage doors, counting people, and more, the principal function is clear, not just based on end usage but on how the device is specified.

For example, the user manual of the first camera Hikvision listed in their CPB petition (the DS-2CD2532F-IS) is 165 pages long, of which one page is dedicated to recording still images:

The same manual has dozens of pages dedicated to streaming video over networks and these pages are at the very front.

While this tactic is baffling to those that understand the technology, this is not a unique occurrence. The US government was convinced to exclude IP cameras from 'Buy American' protection in 2016, when the US SIA, backed by Hikvision, contended that IP cameras could be 'employed without using the 'lens and image sensor':

While this logic is poor (i.e., a camera without a lens and imager is as much a camera as a car without an engine and wheels), manufacturers often get away with such tactics.

Doug Jacobson, another trade lawyer IPVM interviewed, said that if CBP does decide that IP cameras are being misclassified as "Digital Still Video Image Cameras", it has the power to reverse course and even charge any missed tariffs, plus interest, for up to 5 years.

However, no penalty is imposed if the importer exercised "reasonable care", a legal term for proof that the importer used an "expert" like a lawyer, consultant, or broker for the determination, or referred to a prior ruling.

IPVM asked CBP specifically whether it thought IP cameras were being misclassified as digital still video image cameras, however, we received a vague reply leaving the response unclear:

The civil penalties CBP is referring to are stiff civil penalties, anywhere from two times the tariffs lost up to the total value of the goods imported if they prove reasonable care was not exercised.

We followed up with CBP, once again asking our original question about possible misclassification, but have yet to hear back. We will update if they do.

Clearly, the principal function of IP cameras is not to take still images or video on an SD card. However, US importers, thanks in part to a complaint brought by Hikvision itself, have avoided untold sums by exploiting this.

However, this may not last forever. If the trade war is not resolved and the Trump administration passes the final round of tariffs, this would impose a 25% tariff on almost all imports from China, including "digital still image video cameras."