The 'Chinese' are the industry's #1 threat (or opportunity depending on one's perspective).

IPVM has extensively covered the rise of Dahua and Hivkision (see test results).

But those two are not the only ones. Many of you get bombarded with emails from other Chinese manufacturers. Names like Coco, Fancy, Monica, Elvis, Pedro, Selena, Sindick and many more are common to surveillance professionals.

And it most be working, because when we asked the community what we should test, Cantonk and Longse, the two most prolific Chinese spammers were member's top choices. So we took the plunge and bought their cameras.

We tested the Cantonk and Longse cameras against the lowest cost options from Dahua and Hikvision to see how they compare in:

Below are our key findings from this test:

Pricing for cameras we've tested are as follows:

Note these prices do not include shipping. Depending on location and quantities, users should expect to pay ~$30+ for shipping.

At prices similar to Dahua from the same online sources, it makes little sense to use super low cost cameras such as these. Given their poor imaging performance, buggy user interface, and poor VMS integration, problems which Dahua and Hikvision do not have, users are better off selecting the better-known brands.

That being said, we expect to see improvement at this extreme low end of the market, just as Dahua and Hikvision have improved compared to other manufacturers. Even compared to the build quality and usability of the $29 Wodsee camera we tested a year ago, these models are an improvement.

In this video, we examine the physical construction of the Longse and Cantonk cameras.

Users should note the large size of the POE dongle, which may be a challenge to hide during installation. Also note the lack of ports or connectors beside the POE and 12VDC power, with no I/O, audio or other connectors.

Physical size of both the Longse and Cantonk are similar to that of Dahua and Hikvision IP bullets, both in length: 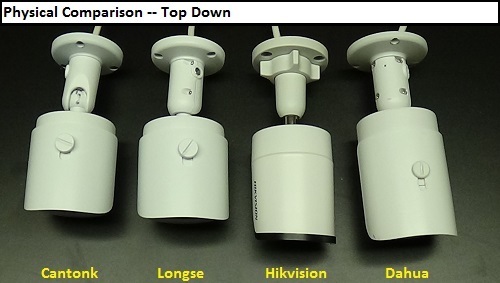 The UI is lacking some configuration options, notably compression settings, while other functions (BLC/WDR, snapshot) simply do nothing.

ONVIF integration to VMSes is buggy, requiring RTSP for reliable streaming. The cameras' ONVIF implementation uses port 8999 instead of 80 (typical in the vast majority of ONVIF cameras), though this is not documented. Only Genetec Security Center was able to connect and stream properly at all, and only using the Cantonk camera. Other VMSes either did not connect, did not stream, or displayed lower resolution and framerates.

However, unlike VMS systems tested low cost NVRs, such as Dahua and Wodsee (the $39 NVR) had no issues discovering, configuring, or streaming either camera. Cameras simply worked as other better-known brands did.

We tested the Cantonk, Dahua, Hikvision and Longse cameras in our conference room scene using this field of view. Cameras were staggered to compensate for FOV differences. 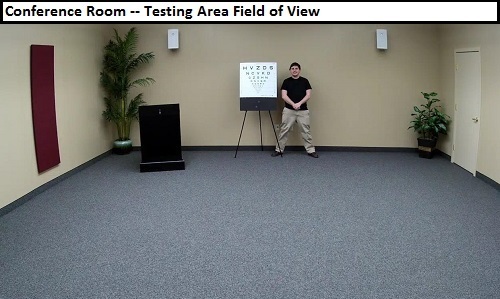 In full light, with a HFOV of ~40' (~45 PPF), the Cantonk and Longse images are notably noisier and blockier than Dahua and Hikvision, at least in part dude to their higher quantization (33/31 vs. 28 in Dahua/Hikvision).

At ~5 lux, before the cameras switch over to night mode with IR on, the Cantonk and Longse (especially) cameras are significantly darker and noisier than Dahua and Hikvision. The test chart is nearly illegible in the Longse camera, while Cantonk displays lines 1-2. Note that the Cantonk and Longse cameras could not be adjusted to switch to night mode at brighter levels to avoid these issues.

Turning the lights off (~0.1 lux) and IR illumination on, the Cantonk and Longse cameras are again very poor. Neither can discern past line 1 of our test chart, nor details of the test subject.

Both cameras had an uneven IR coverage pattern, much brighter at the center of the FOV than the edges, an issue compounded by AGC problems (detailed below).

In the animation below, our subject walks from the edge to the center of the Cantonk's FOV. He is nearly undetectable at the edge of the field of view, not fully visible until about 1/3 of the way across the scene.

One of the biggest factors as to why these cheap Chinese cameras are poor in low light is poor AGC functionality. Left on "Auto", the default, images are very dark even with IR on, as seen above. Manually adjusting gain up (to 140 on a scale of 1-250), nighttime imaging is much improved, as seen below:

However, with lights on, at ~160 lux, the image is completely washed out and unusable.

The Cantonk and Longse cameras did not allow compression adjustments and defaulted to a quantization of about 31-33 depending on the scene, compared to 28 in Dahua and Hikvision. The Longse camera's bitrates average lower than Dahua and Cantonk, though higher than Hikvision in most scenes. However, even with this higher compression, the Cantonk camera's bitrates were much higher than Hikvision, more similar to Dahua.

Tests were performed using default settings except where otherwise noted.

Firmware versions for cameras are as follows:

Chinese Direct Disruptor Reolink Tested on May 31, 2017
Another Chinese disruptor, Reolink, is gaining attention. This one is...
Longse vs Dahua and Hikvision Tested on Nov 16, 2016
For many, even $100 cameras are too expensive. That is where spam king Longse...
The $100 MP Era is Here on May 13, 2015
The video surveillance industry has entered a new era. This era is...
NMAPing IP Cameras on Mar 05, 2015
The Hikvision hack has increased security concerns. Indeed, most users do...
Comments (20) : Subscribers only. Login. or Join.