Sony's long awaited 6th generation IP cameras are now available. In our 2010-2011 tests, Sony's 5th generation cameras were one of the top offerings of that era. However, the market has advanced in the past few years.

In this report, we share our test results of Sony's 6th generation premium series, specifically the SNC-VB600B. We matched it up against recent entrants from Bosch and Axis that offer some of the best low light and WDR performance on their lines (see our recent Bosch vs Axis low light test).

Indeed, Sony has been making its own waves, talking about how the 6th generation cameras were a major advance in low light imaging.

Here is a preview of the side by side simultaneous shootouts we did: 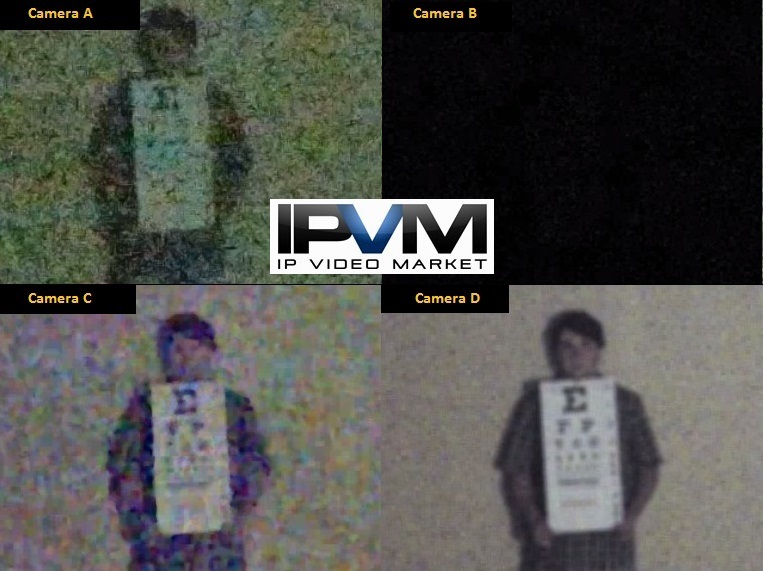 [NOTE: Regular IPVM readers may notice that the Bosch looked even better than our previous test with them. This is not an error. Since our last test, Bosch released new firmware that significantly improved the camera's performance. Read the updated Bosch Starlight test report for more.]

The SNC-VB600B is a competitive choice for a 720p low light/WDR camera, outperforming the Axis Q1604 in some scenes. The main sticking point is Sony's implementation of VBR, which will be detrimental in low light and high motion scenes. Users may find that CBR provides a lower average bitrate because of this. Users preferring Sony would do well selecting this camera instead of the similarly priced CH140, as well.

Physically, the Gen 6 cameras are mostly the same as Gen 5, with most differences simply being the location of rear connectors. There are two other main differences:

First, with the cameras forced into color mode, at light levels below one lux, we can see the VB600B is noisier than Axis and especially Bosch, with most of the chart obscured by noise. The subject is unrecognizable in both the VB600B and Q1604, while Bosch provides some level of detail, as well as more legible lines on the chart. This also shows the most striking improvement between Sony's fifth and sixth generations, as the CH140 is nearly completely black at this level. 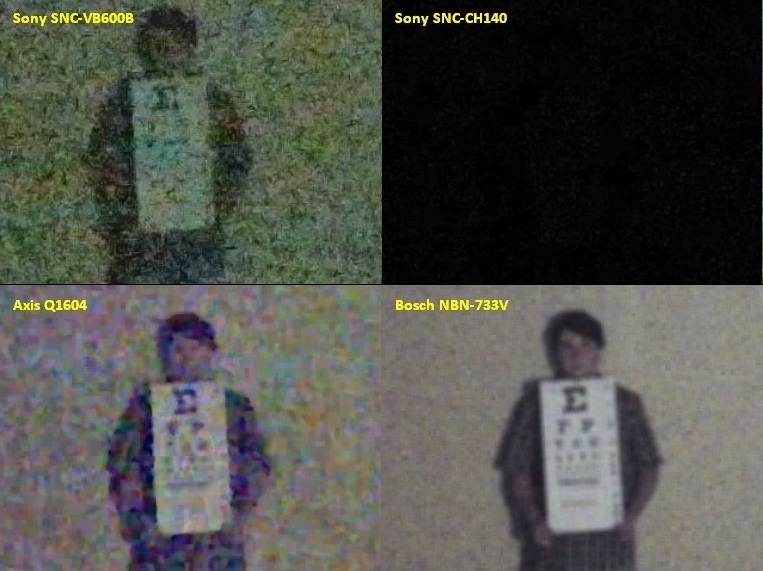 In monochrome mode, results are similar, with noise levels roughly the same. 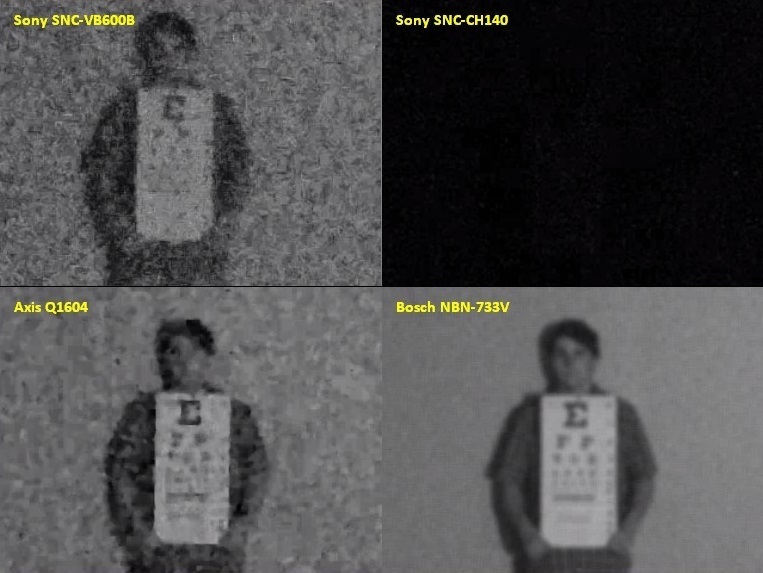 In full light, ~300 lx, we can see that images are fairly similar across cameras. The VB600B and Q1604 are most similar in tone and saturation, with the 733 and CH140 more washed out. Some artifacting is visible around the edges of the subject, but this does not affect recognition. 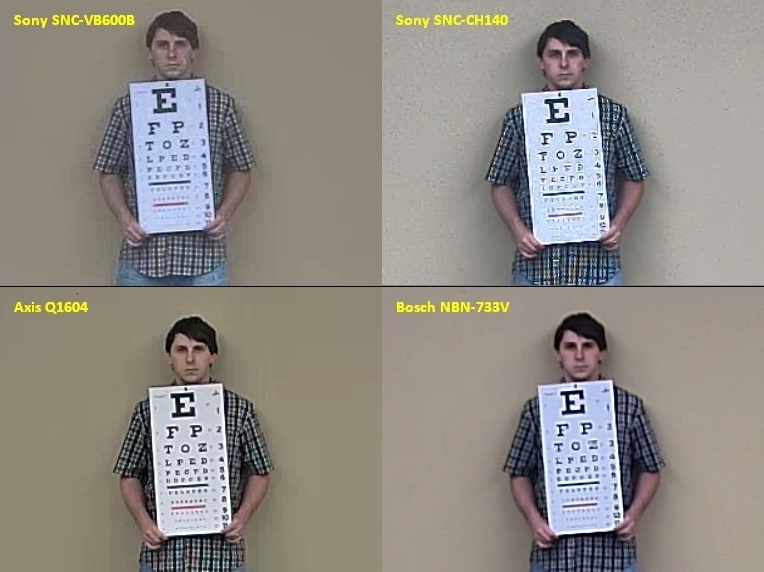 In our strongly backlit overhead door scene, the VB600B performs comparably to the past generation Sony CH140 and the Bosch 733V. The Q1604 lags in this portion of the scene. 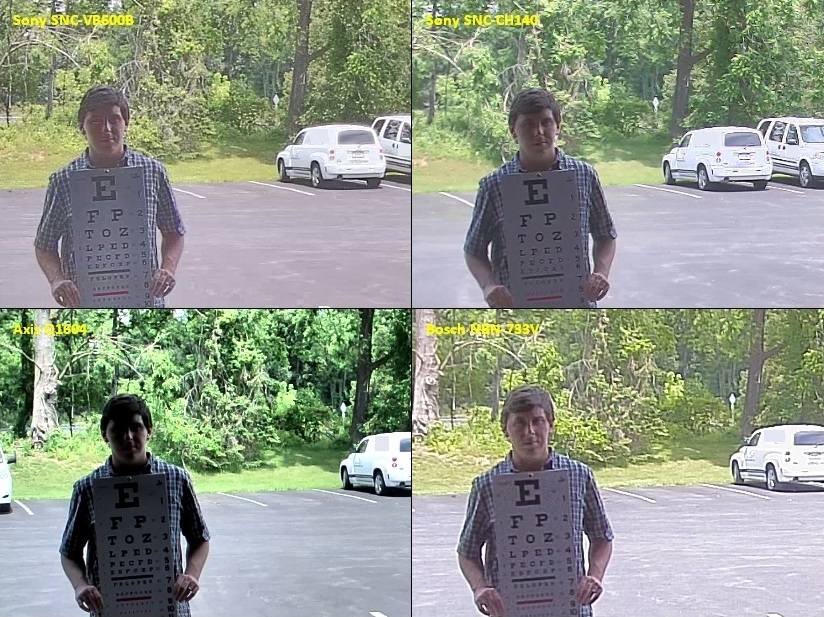 With our subject in the dark area to the side of the overhead door, the Sony cameras are consistent, while the Q1604 improves, and the NBN-733V performs slightly worse. 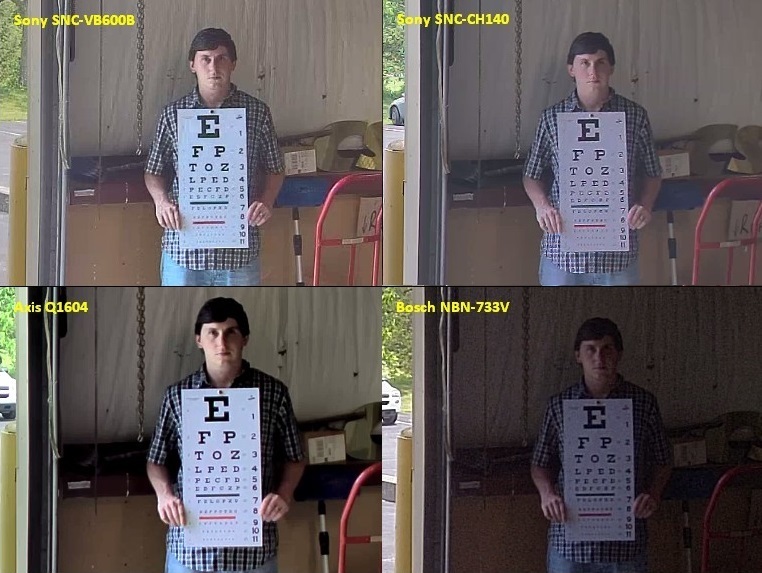 We tested the cameras' motion performance in both interior and exterior scenes to look for motion artifacts and blurring.

First, we set up the cameras near an active roadway, with vehicles passing at 40-50 miles per hour. This daytime shot was taken in an area where there was no direct sunlight, in order to minimize issues from glare. Both Sony cameras exhibit some ghosting on the vehicle, especially the wheels, and worse in the CH140. Axis and Bosch did not have this problem, though the Q1604 suffered from overexposure on the brighter areas of the car. (Download this 5s clip) 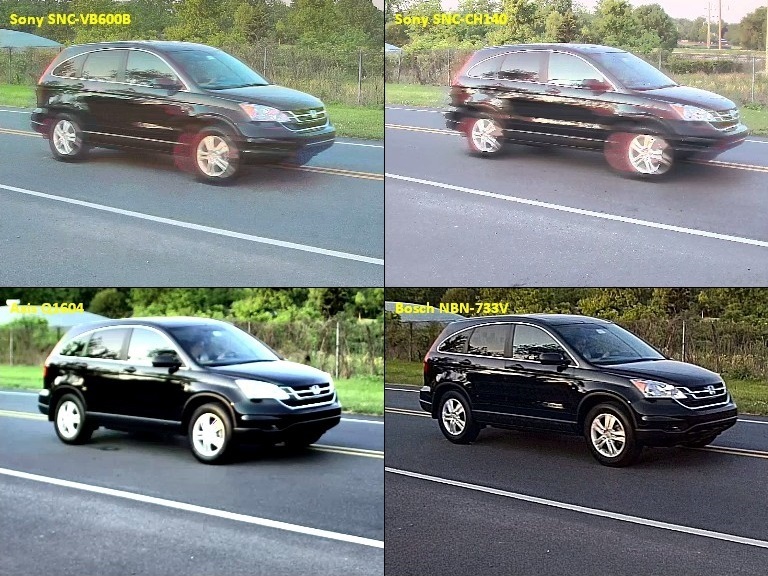 [UPDATE: Sony says the reason for the blur is because their camera defaults to 'high' WDR using 4 exposures. Sony recommends turning WDR To medium/mid in such scenes that will only use 2 exposure, eliminating a longer exposure and therefore the blur.]

At night, at about .5 lx, all cameras exhibit blur on headlights and tailights, with Sony and Bosch handling these lights about equally, both better than the Axis Q1604. Note that all cameras were standardized to a maximum 1/30s exposure. (Download this 5s clip) 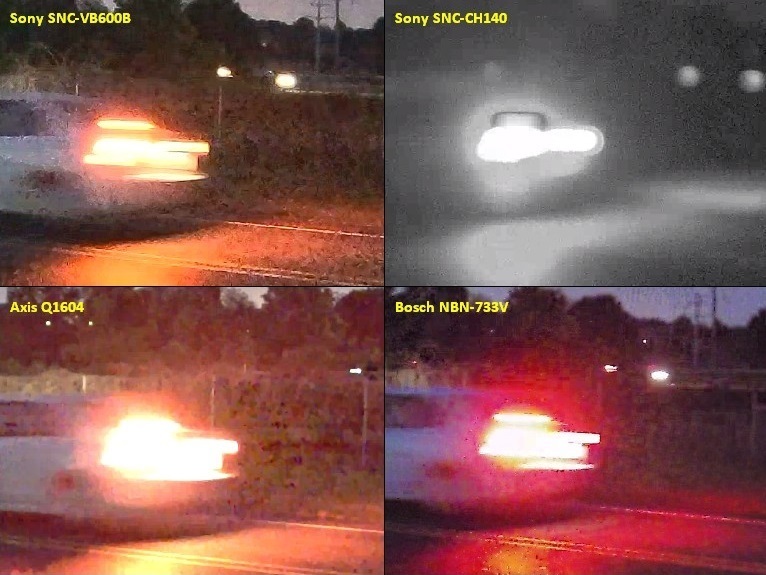 In the sixth generation, Sony added VBR encoding, addressing complaints that they were one of few major manufacturers to allow only CBR. In firmware update 2.2, they added a cap to their VBR implementation. This is key because in low light scenes we found bandwidth jumped to very high levels.

In our still indoor daytime scene, Sony was slightly lower than the Axis Q1604, but higher than the Bosch NBN-733V. Note that we list only consumption for the SNC-VB600B, but found the VB600 to be roughly equal.

In our low light scene, the VB600's VBR bitrate jumps drastically, the highest we observed in our tests. Bandwidth was approximately the same regardless of color or monochrome mode:

Finally, simulating extreme amounts of motion with a laser under 1 lux, Sony remains approximately the same, while Axis and Bosch both jump:

We tested the VB630's low light performance against Bosch's NBN-932V. At ~.1 lux, the subject is difficult to detect in the 932V, with no details supplied, and the chart barely visible. However, the VB630 reveals some letters of the chart, with the subject easily visible in the scene:

Sony informs us that they will be releasing 6th generation E series of cameras at a lower price point later this year, which retains low light and WDR performance but removes 60 FPS capability, audio, SD storage, etc. Exact pricing and feature set are not yet available.