The video doorbell is flooded with options, but sales have been strong for SkyBell, holding the #2 spot on Amazon against mega-funded Ring. Not only that, but it claims HD color video at night, more integration options, and even costs less.

But does it live up to the claims?

We bought a SkyBell HD and tested it head to head against Ring Pro. 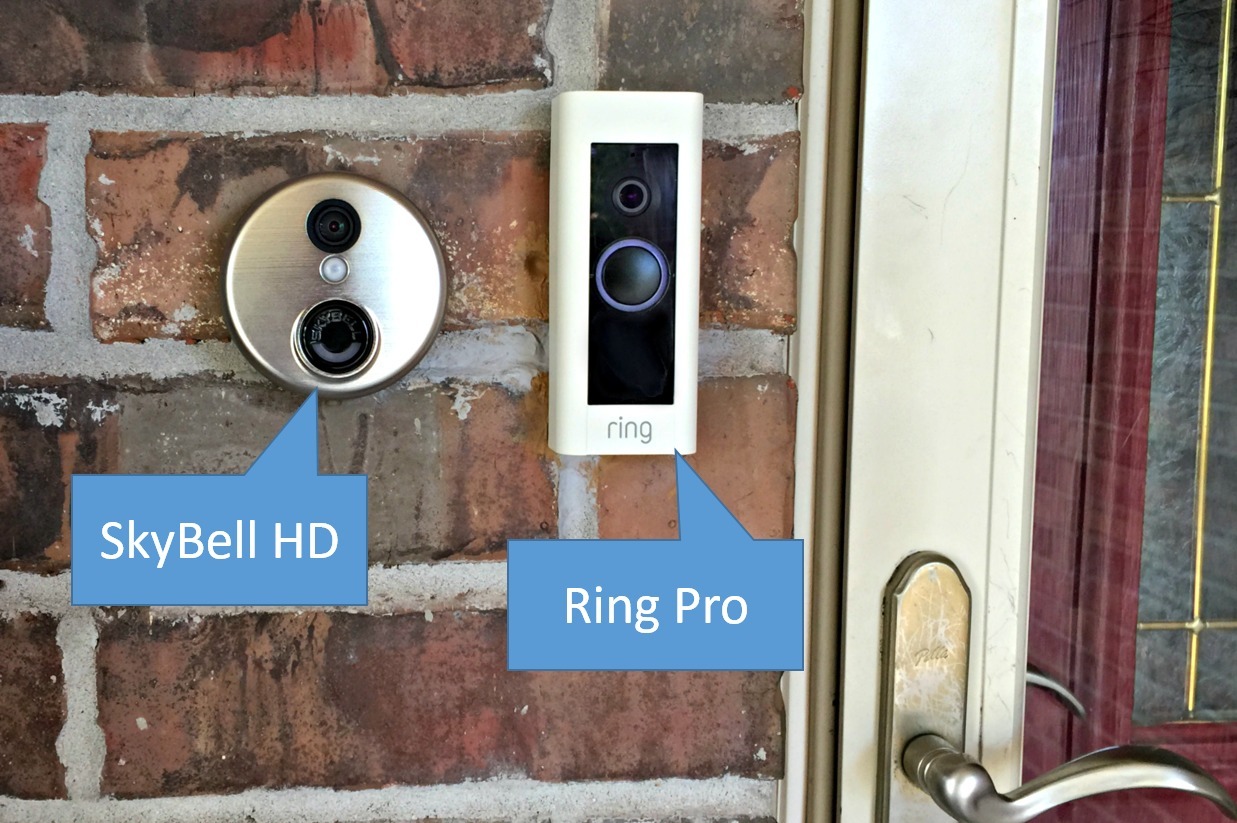 We evaluated SkyBell on the same criteria our Ring Pro and Original Ring tests:

Both doorbells claim the same core functionality - video doorbell and intercoms, and both offer 1080P resolution.  However, after our tests, not all claims match up equally. Here are the major test differences at a glance:

While SkyBell claims 'HD color video at night', our testing shows this is because the camera is day only and has no IR option.  Moreover, SkyBell HD's app is not reliable, the unit has poor motion detection, and misses triggering on some doorbell rings altogether.

After testing SkyBell HD's operation, here are our key findings:

In general, while image quality is good in day, video quality is poor.  Even on a dedicated, strong 5 GHz WiFi network, more than 50% of SkyBell's video clips include some type of flaw, from blockiness, smears, or missing portions of frame.

The image below is a general example of those problems:

And getting video to connect is not always reliable. The app often hangs and freezes on a black screen, and no call session is ever opened: 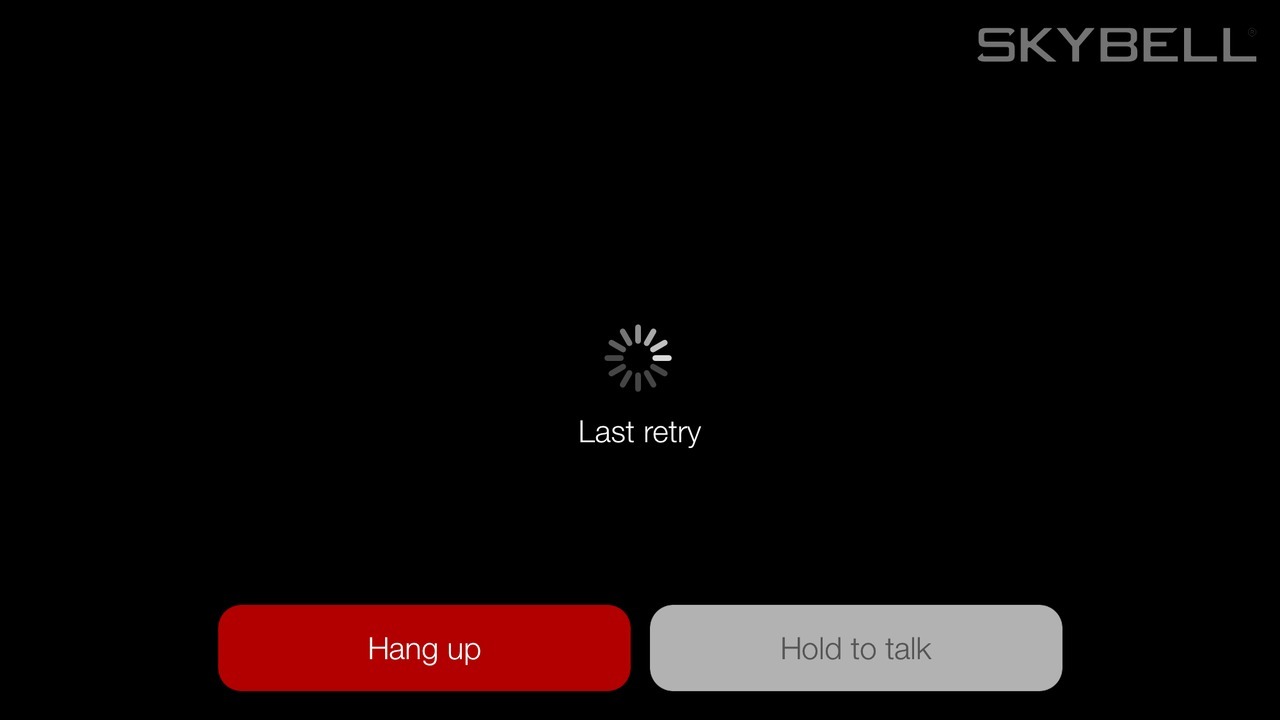 The occurrence of problems is high, and more than 60% of all actions included some type of video flaw or connection error.  While Ring Pro also exhibits errors, it happens at a much lower frequency, ~<15% of all calls.

However, in the shootout images below, overall SkyBell HD offers a more crisp and better quality image with all else equal: 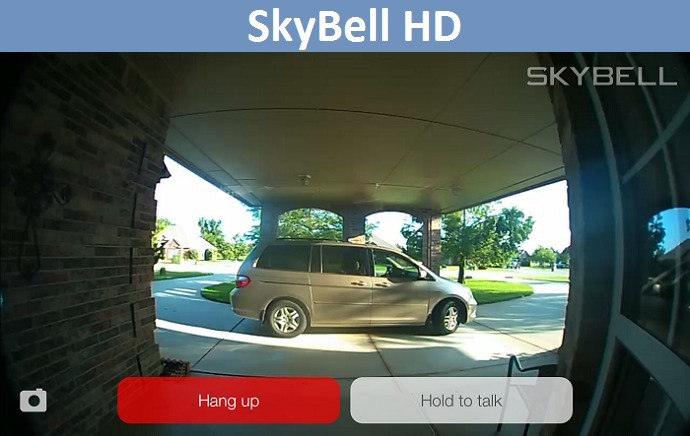 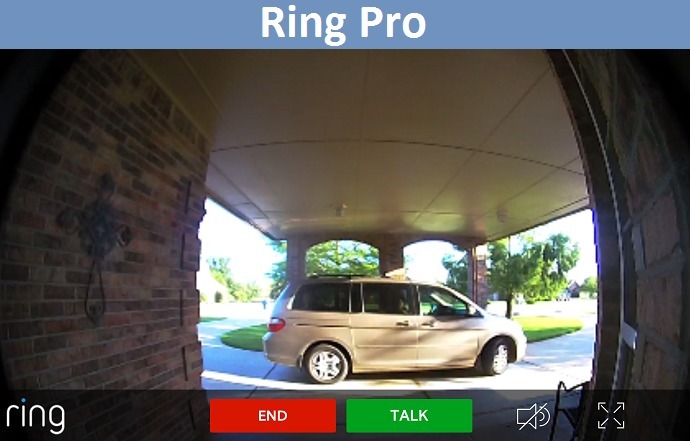 Another relative 'showstopper' is the lack of noise cancelling in the audio intercom.  While communication was reliable and stable, it often was heard mixed with background noise and wind, making conversations difficult.

Also, SkyBell HD requires the app user to 'press and hold' the 'Talk' button in order to speak, essentially resulting in unidirectional audio, while Ring Pro is bi-directional and speaking is more like using a telephone versus a walkie-tallkie.

A big disadvantage for SkyBell are the three basic motion detection options - low, medium, or high.  Setting the unit to 'low' resulted in no motion being recorded, while setting to 'medium' or greater resulted in many false alarm events of shadows, blowing trees, or cars moving in the background.

In contrast to Ring Pro that offers polygonal motion detection zones, SkyBell is much weaker.

Physically SkyBell HD is ~3 inch diameter circle, uncommonly shaped to other doorbells or video intercom units. Unit construction is mostly plastic, with a plastic mounting bracket that anchors to a wall: 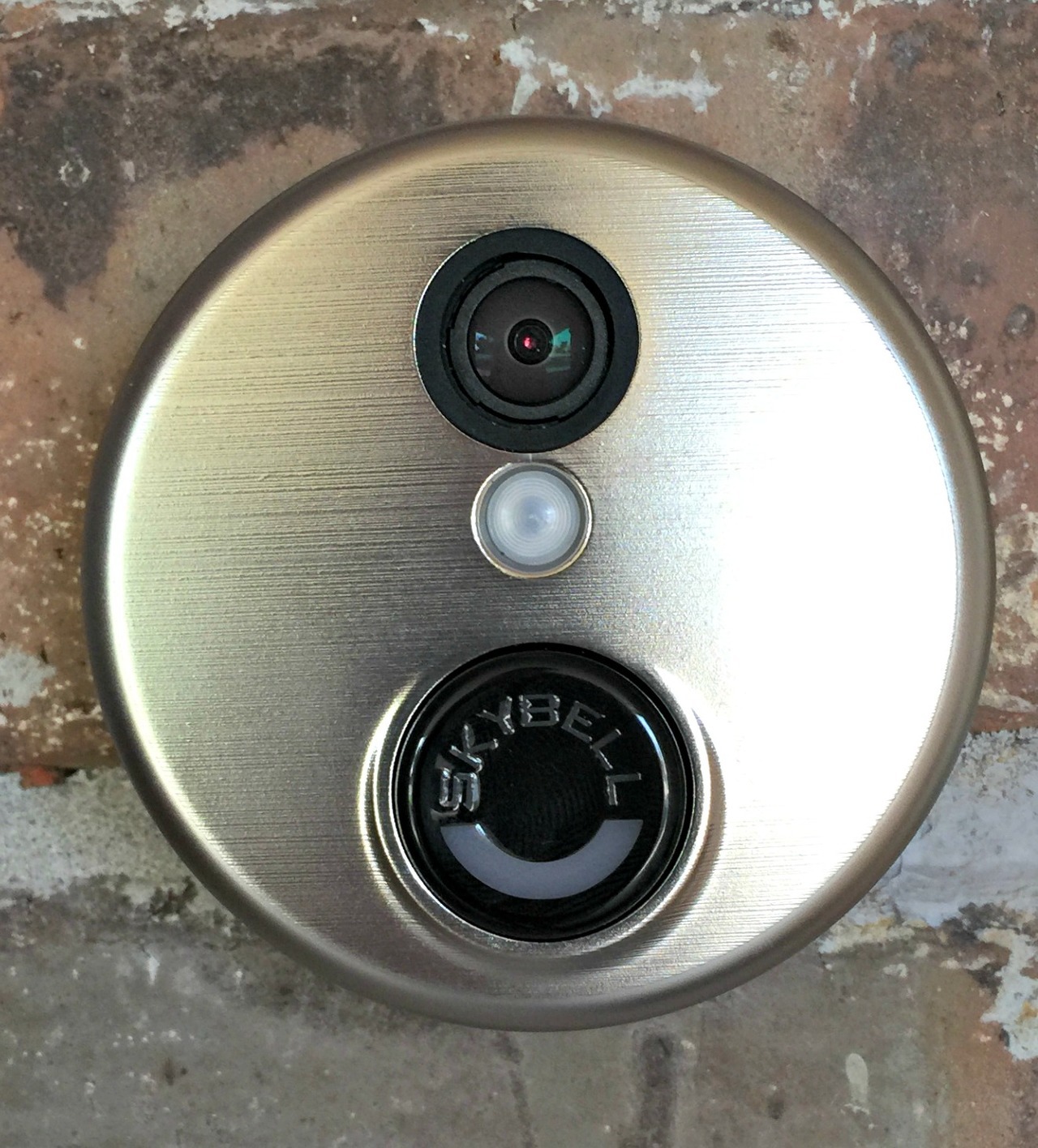 Once of SkyBell HD's strongest claims is color HD video in low light.  The way this is accomplished is essentially a gimmick, as the doorbell unit itself turns into a white light illuminator, emitting visible light into the scene to enhance the non-IR, day only imager:

However, notice how uneven and overexposed the subject can be with this arrangement.  The IR enabled monochromatic videos from Ring Pro hold the edge here. If users have the option to turn on a white porch light, overall image quality will be superior to SkyBell's 'color HD' gimmick.

Free Cloud Storage but App Only

Unlike Ring units, SkyBell charges nothing extra for cloud recording. While Ring charges $3 per month for 10 days, SkyBell stores 7 days for no cost.

However SkyBell events can only be recalled or downloaded via the app, unlike Ring's option web portal for workstations. 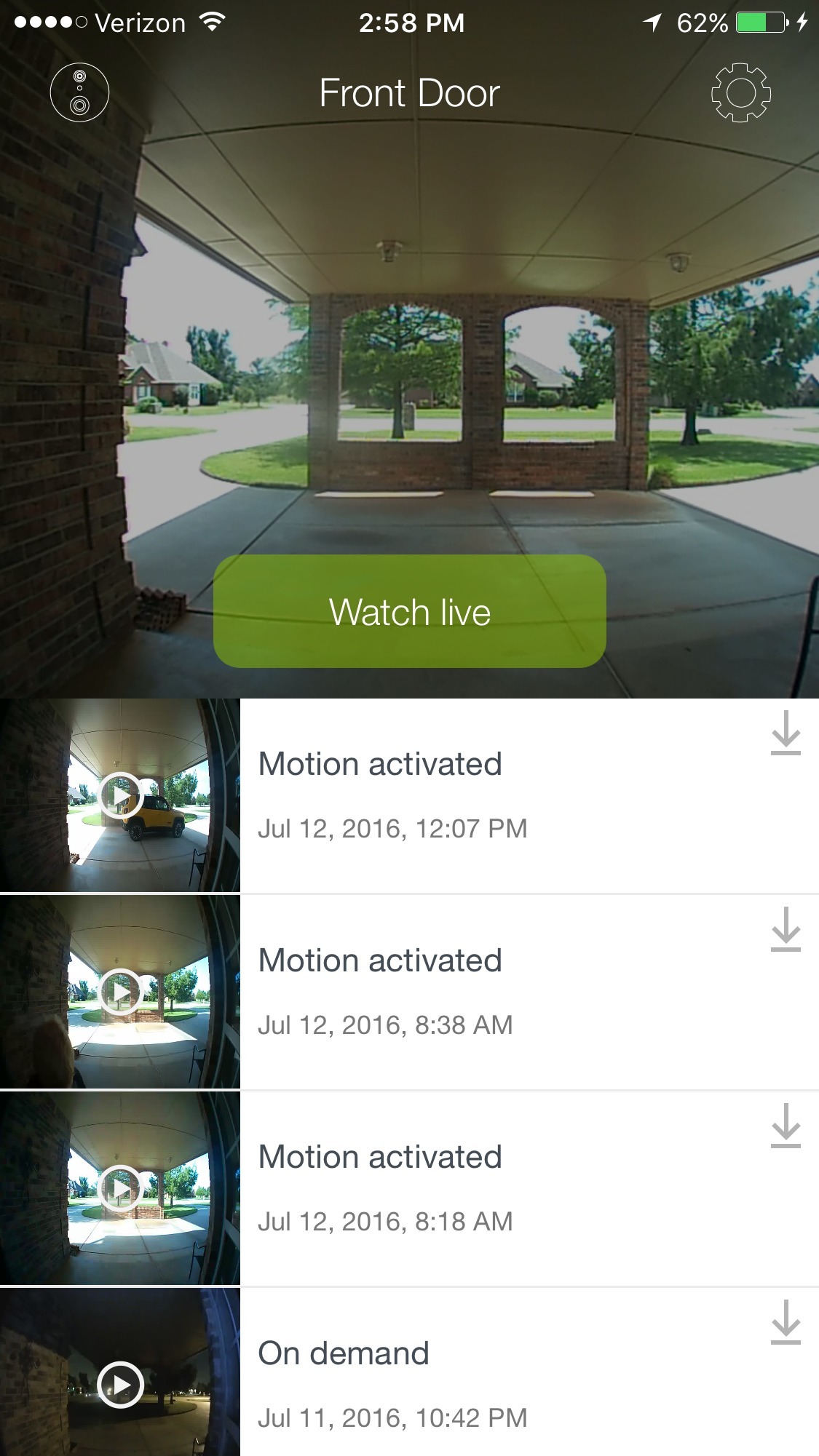 During setup for our test, we contacted SkyBell tech support via phone, and our call was promptly answered.  However, the technician working our issue was non technical and only knew basic answers to the most common installation issues, but could not answer questions about power use or router settings that might optimize performance.

The most helpful resource was SkyBell's pop-out Q&A tab appearing on general info pages.  While still basic, the articles offered a searchable and well-written set of tech tips about troubleshooting issues: 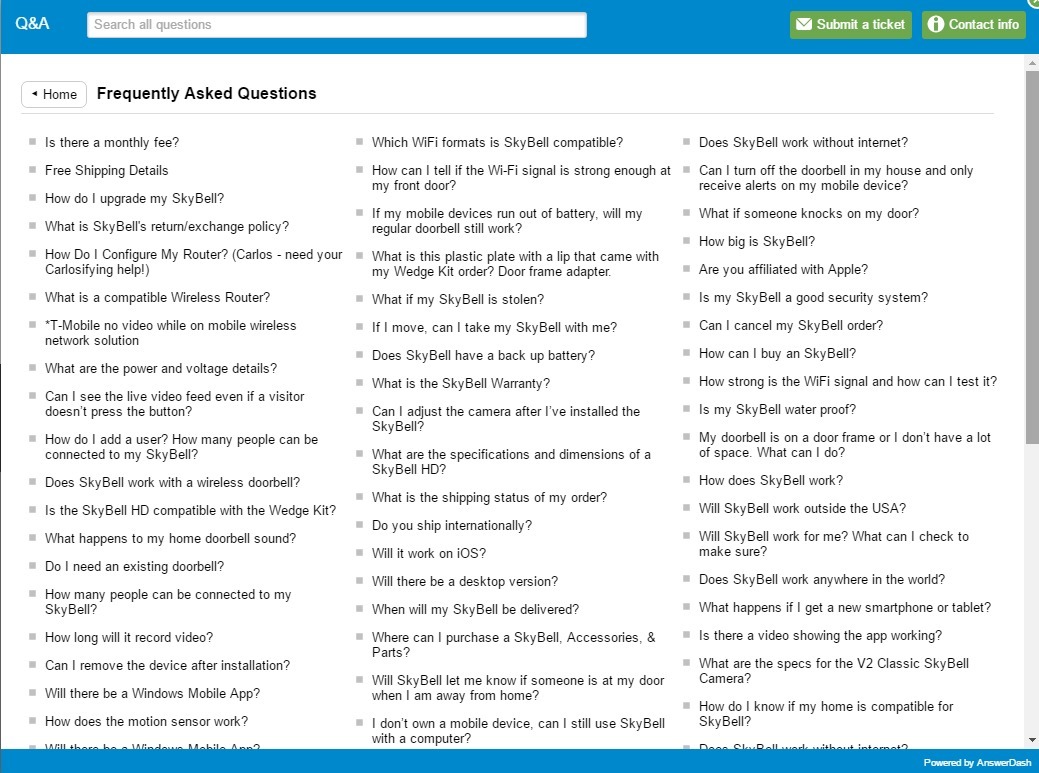 Given the range of flaws and bugs, users a better off avoiding SkyBell HD at this point.  When updates or new models are released, we will re-examine SkyBell, but for now users are better to consider options like Ring Pro for the sake of reliable function and better low light performance.

Bad: Dahua Villa Video Doorbell Tested on Jan 11, 2019
Doorbells are one of the hottest segments in the residential market but...
Directory Of Video Doorbells on Nov 06, 2018
Video doorbells are one of the fastest growing categories in video...
Assa Abloy Acquires August on Oct 25, 2017
The mega access control manufacturer, Assa Abbloy, has acquired [link no...
SkyBell Trim & Slim Models Tested on Sep 25, 2017
Given continued growth of video doorbells and the central role Skybell plays...
Geovision Doorstation Tested (CS1320) on Sep 12, 2017
Geovision has released the GV-CS1320 door station, priced at a fraction of...
Alarm.com Vs. Honeywell Total Connect Shootout on Aug 30, 2017
In the smarthome and intrusion market, Alarm.com and Honeywell are two of the...
Directory Of Consumer Security Cameras on Aug 16, 2017
The consumer camera segment continues to grow, with new startups and models...
Alarm.com Tested on Jul 13, 2017
Alarm.com has become the dominant force in smart home / remote service...
Comments (8) : Subscribers only. Login. or Join.