$57 million. That's the big bet by one of Silicon Valley's top VCs that a Massachussets based startup, Simplisafe, can knock off behemoths like ADT.

And in typical Valley style, they are not shy about what they think of incumbents, declaring:

"Most home security companies are stuck in the eighties with aggressive salespeople, obsolete technology and expensive alarm monitoring contracts that lock you in for years and thousands of dollars. We love the way SimpliSafe is disrupting an antiquated industry."

Is this product for real?

We bought a Simplisafe kit, shown below: 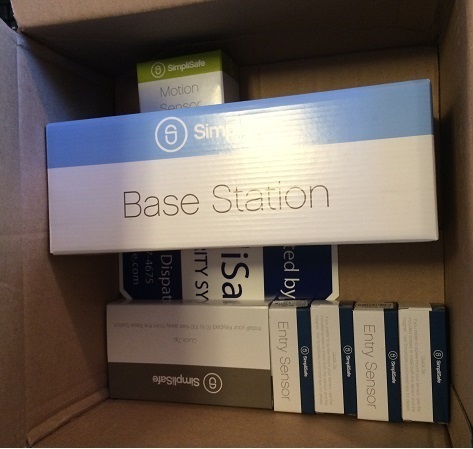 We tested its installation, operation and advanced feature sets compared to traditional alarm systems like ADT.

While those 'cons' are marked against incumbent offerings, SimpliSafe's system offered some clear 'pros', or positives, as well:

Below is a quick video showing the basic function and alerts displayed by the system on the wireless keypad and remote app:

In terms of system design, SimpliSafe offers only a few basic sensor types designed to be generally useful in houses but not always ideal for specific areas. Consider the single option PIR motion sensor: 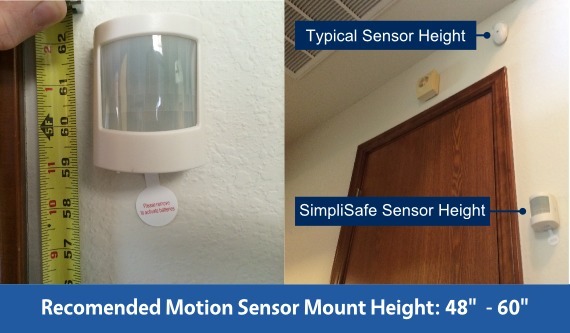 The installation instructions clearly list the mounting height for this sensor between 4' and 5' above the floor. The range of this sensor is about 30', has a 90 degree range, and is 'pet-immune' up to 30 pounds, but it clearly sacrifices optimal focus for general use. In the image above, notice the 'typical sensor' mounted at about 8' that also sees in a 90 degree range.  However, this sensor is mounted in a corridor, and only needs to see about 15'.

This specific application allows the sensor to be mounted higher and is more aesthetically pleasing and less intrusive. Not only this, but the traditional sensor is a dual tech type, and is less prone to false alarms in a tighter sensing area and will likely be better performing as a result. 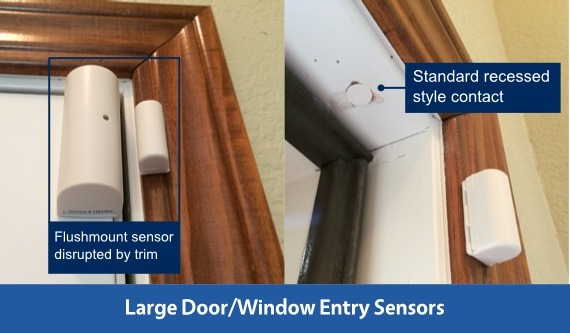 The unit itself is quite large and obtrusive compared to the standard 'recessed type' door contact. The flushmount application is also a disadvantage when mounting onto trim framework that may be contoured and result in a less-ideal contact bond than another sensor style.

This same sensor is specified for use with both doors and windows, and is the only option available. If the design of the door or window cannot provide a solid surface where both sensor sides can be mounted within 2" of each other, then it cannot be monitored.

One of the biggest differences compared to incumbent systems is that all alarm devices are battery powered and wirelessly connected. This makes installation very quick, with the process involving pulling a tab to connect the battery, and peeling off an adhesive mounting strip. The image below details these features typical of all system devices: 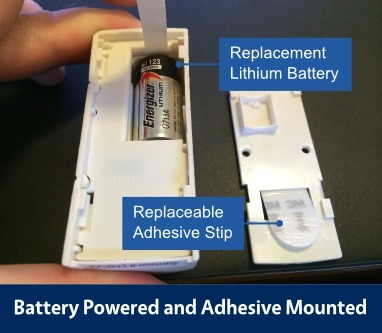 Indeed, while battery powered, adhesive mounted strips are easy to install, they may not be adequate for some applications. Incumbent systems usually mount sensors with screws or are mechanically fastened to surfaces, while SimpliSafe sensors can be knocked loose or tampered with easily.

SimpliSafe includes a set of self-tapping screws with each sensor for more secure mounting, and if locating the device in vulnerable locations they should be used, which adds complexity and time and may not be suitable for wood or drywall surfaces.

Another distinctive, albeit not unique, aspect of SimpliSafe's platform is control via smart devices. All facets of the system can be accessed by the app, keeping the same format between physical keypads, mobile interface, or app: 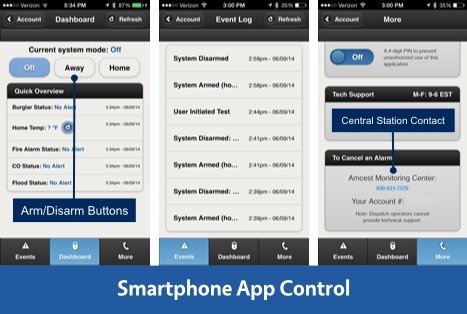 While this option is only available with the 'top end' monitoring subscription at ~$25/month, that cost is still typically 20% - 100% less than the equivalent 'app based' package from an incumbent provider.

When it comes to power features like video surveillance or home automation, SimpliSafe flat out does not support it. Even dated incumbent panels can be combined with 'add-on' modules that integrate with cameras or Z-Wave/Zigbee hubs.

While SimpliSafe has hinted (since 2011) that video support is being developed, there are no firm deadlines for release.

Given the extreme ease of installation, no mandatory monitoring, system transportability, and limited sensor choices, SimpliSafe is best suited for apartment dwellers and those looking for a basic residential alarm system.

Indeed, SimpliSafe stops short of promoting the system for commercial applications. For that segment, there is still too much variability in sensor performance and system configuration for the current platform to be much use.

However, given the recent large investment, if SimpliSafe sets its sight on adding video surveillance, zoning, and beefs up sensor options, they could open a new campaign against complacent enemies.

From our overview update, we analyse the cash injection and how it may help the company become a prime player in the space:

Compared to traditional alarm systems, Simplisafe is not revolutionary but it does offer some savings and some conveniencies. Indeed, Simplisafe is just one of many DIY intrusion offerings.

While Simplisafe was founded in 2006 and reports 100,000 customers, until now, the company appears to have grown with only modest external funding.

The $57 million in funding will let them embark on a Dropcam style massive marketing campaign. And that is the key potential / differentiator here.

Even if Simplisafe does not 'beat' ADT, there clearly is an opportunity for a DIY alarm alternative to become a major player. And with $57 million to spend over the next few years and a powerhouse VC behind them, they have a shot at it.

Simplisafe 'All New' Generation 3 Tested on Feb 08, 2018
Feared by the traditional alarm industry, Simplisafe has launched its 'all...
Vivint Streety Video Strengthens Door Knocking on Jan 17, 2018
Vivint is famous (or infamous depending on your perspective) for mastering...
CES 2018 Show Final Report on Jan 12, 2018
This is IPVM's final edition of our 2018 CES show report. Below are already...
The Interceptor Aims To Fix Vulnerability In Millions of Alarm Systems on Jan 08, 2018
Security executive Jeffery Zwirn claims a 'catastrophic' flaw exists in...
Bosch G-Series Intrusion Tested on Jul 26, 2017
Bosch is one of the biggest names in intrusion, and the company's G-Series...
Simplisafe Has Lower False Alarm Rates Than Professional Systems on Mar 01, 2017
'Everybody' 'knows' that DIY alarm systems, like Simplisafe, generate more...
Tyco DSC PowerSeries Neo Intrusion Tested on Jan 30, 2017
Tyco's intrusion system line, DSC, is one of the most widely installed...
ADT Launches Canopy - Professional Monitoring For DIY Devices on Jan 19, 2017
The intrusion industry has criticized DIY security systems for...
Honeywell Ademco Vista Intrusion System Tested on Jan 11, 2017
One of the biggest brands in security holds one of the most common intrusion...
Introduction To Burglar Alarm Systems on Jan 04, 2017
While alarm systems are popular, balancing between the right level of...
No One Should Ever Use Simplisafe on Dec 12, 2016
Simplisafe, the upstart DIY intrusion alarm system, is increasingly Public...
Something TERRIBLY WRONG In The Home Security Industry on Aug 08, 2016
Who is terribly wrong? The $57 million Silicon Valley funded startup,...
An Honest Integrator On The Truth About RMR on Jul 05, 2016
It is fashionable to want recurring monthly revenue (aka RMR). But...
Set-Top Box DIY Alarm System Sage on Jul 05, 2016
A multi-billion dollar corporation has gotten into the DIY alarm system...
Fighting Back Against DIY, DMP Opens OnDemand Monitoring and Company Store on May 17, 2016
The popularity of DIY intrusion alarms has become a real threat to the...
ADT Merges With Protection 1 In $15 Billion Deal on Feb 16, 2016
The world's least favorite security company, ADT, is being merged [link no...
Videofield Launches Dealer / DIY Service Dragonfly on Jan 21, 2016
RSI Technologies, the company behind Videofied, has launched a new DIY...
Scout DIY Home Security Tested on Dec 11, 2015
This hipster startup claimed it would crush cavemen alarm companies, with a...
ADI Scare Tactics Against DIY Security on Nov 27, 2015
ADI wants you to buy alarm system parts from them, not those kits on the...
The $100 Intrusion System Korner Tested on Aug 18, 2015
Multi-year contracts at $30 per month are the norm. Now a startup is...
The Security System in a Bulb: BeON on May 08, 2015
One of the hottest ideas in home security is a lightbulb. Well, BeON is not...
ASIS 2014 Show Floor Review on Sep 30, 2014
What Happened to the New Products? Nothing major at all....
Comments (28) : Subscribers only. Login. or Join.