Milestone has picked up one of the biggest companies in the world as an OEM.

In this note, we examine how Siemens is using Milestone's VMS, how this compares to other Milestone OEMs, what this means for the two companies and how it impacts integrators.

The press photo shows XProtect with a different color set as shown below: 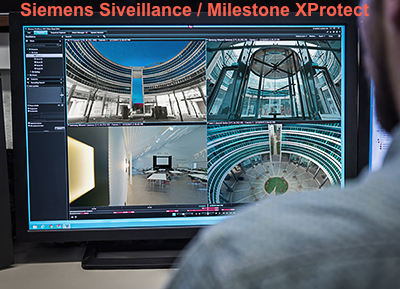 It fits within their overall 'Siveillance' security software solutions which includes analytics and PSIM software [link no longer available], evolved / from their 2006 Vistascape acquisition. However, the VMS portion can be used on its own without those parts.

Milestone primarily sells through its own brand, however it does have an ongoing OEM program including an OEM sales director [link no longer available].

The most famous Milestone OEM is OnSSI, though OnSSI oeming of Milestone is different than Siemens, in that OnSSI has developed a significant portion of its own technology most notably on the client and administrative side.

Siemens described to us the benefits of having "one point of reference" and "everything under one brand".

The Impact on the Industry

Siemens Building Technologies is a major player in both Europe and North America, reporting $6.6 billion USD annual revenue. Most importantly, Siemens is a sizeable integrator focusing on large-scale security projects.

As Siemens acknowledged, now that they are OEMing Milestone, that is what Siemens the integrator will be selling. That's bad for Milestone dealers competing with Siemens and for rival VMS vendors.

We expect this to have the biggest impact on straight VMS projects where Milestone is just being resold as Siemens as that where is most of the market demand, compared to the existing Siemens analytics / PSIM which remains a niche.